Apology videos that work, and ones that only make it worse

If you’re a YouTuber or influencer with a large following, chances are that at some point you’ll make a very public mistake which could cost you goodwill amongst your audience, and most importantly, followers.

That’s when you’ll likely want to take part in what has become one of YouTube’s most interesting subgenres: the apology video.

We’re going to focus on two types here: the ones that work to address the mistake and stem the tide of negative comments and unsubscribes (“good” apology videos), and those where the art of execution has, on many occasions, left plenty to be desired (“bad”).

Bad apology videos are a creator’s worst nightmare. Not only do they fail to curb the flow of negativity and the steep drops in subscriber counts, but they often require yet another apology video to change course and attempt to salvage the situation.

Backstory: James Charles advertised a product on his Instagram that was deemed by mentor and fellow influencer Tati Westbrook as promoting a competitor of hers. She uploaded a brutal 43-minute video lobbing countless criticisms and accusations –including allegations of sexual harassment– at Charles, and causing an immediate, steep subscriber drop on 10th May 2019.

That’s when James Charles (JC) addressed the accusations, posting his first tearful apology video titled ‘tati’ the following day. Things only got worse from there. It managed 3.21 million dislikes with many left unsympathetic not only after the accusations levelled against him – but also with the nature of his apology, which seemed unauthentic and intended for damage control. See a re-upload of the taken down video below:

We were lucky to have set a tracker on JC’s accounts on our analytics tool Pulsar CORE (you can use it for your owned channels, or to track the performance or other accounts) and had a first-row seat into this epic audience outflow.

JC lost ~3M YouTube subscribers over a single weekend, spawning scores of videos mocking his apology videos and articles on his fall from grace.

However, a little more than a week after the controversy, JC managed to reverse the trend. Posting a “good” follow-up apology video, he managed to gain back 1.5M subscribers in just a weekend, and then keep up a healthy level of growth after that. 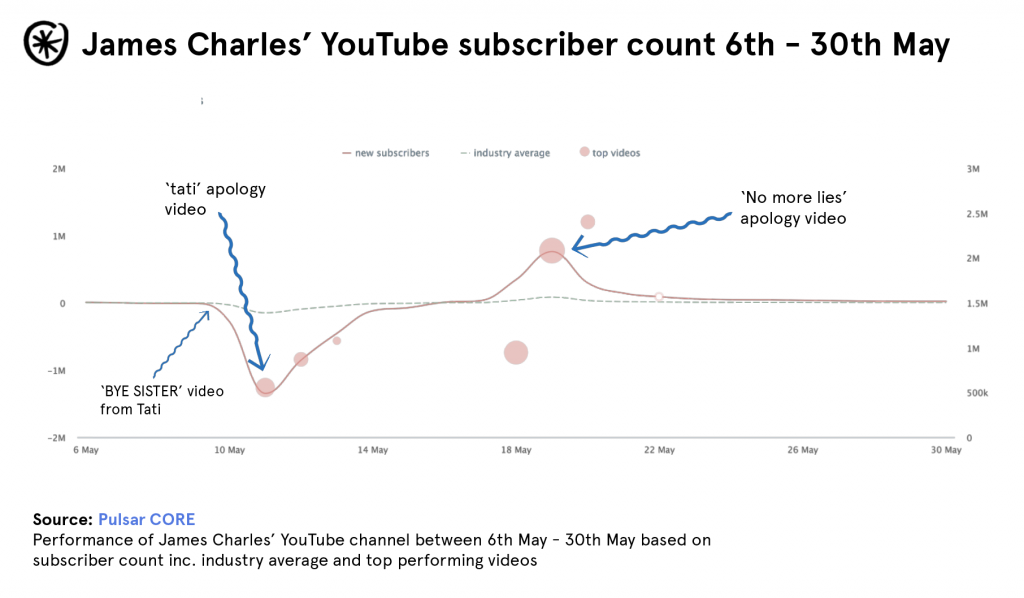 We posted a play-by-play analysis here:

Now that the sparkle eye dust is settling over the James Charles/Tati controversy, let’s look at some audience #s

YES, this was one of the largest audience hemorrhages ever: JC did lose ~3M YouTube subscribers over a weekend

The second video now stands at a very respectable 2.3 million likes vs 588k dislikes, and has had more than 45M views and 404,248 comments – i.e. it is very far from being ratioed.

In the meantime – both Tati’s “Bye Sister” accusation video, as well as JC’s original apology video, were quietly removed from YouTube. That’s the power of a successful apology – it reverses the tide, and allows you to try and rewrite influencer history.

There are many, many examples of YouTubers falling short with their apologies, in many different ways: one of them is ‘playing the victim’ in the videos, with a desperate attempt to protect the reputation of their brand.

Laura Lee’s infamous apology video from mid-August 2018 – addressing racist language she had used in tweets dating back to 2012 – is regarded as a prime example of an apology video gone wrong. There were plenty of ‘waterworks’ and the apology seemed heavily manufactured and contrived.

Using our insights and social listening tool Pulsar TRAC, we analyzed 80,000 YouTube, Reddit and Twitter comments around the time of her apology video and split them into groups of positive and negative terms. There were approximately 10x more negative terms to analyze than positive. 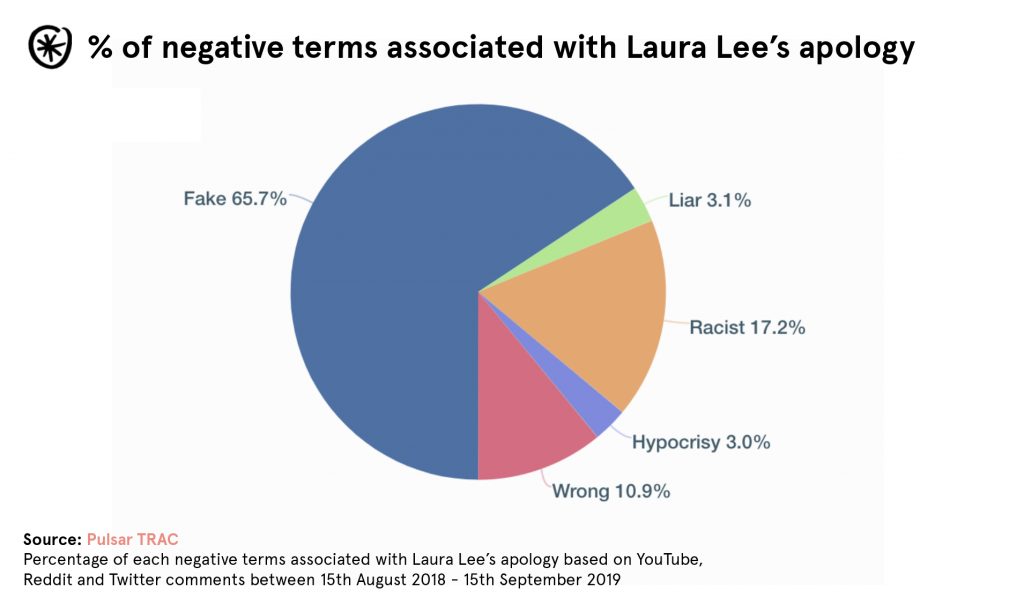 65.7% of YouTube, Reddit and Twitter found Laura Lee’s first apology to be fake, with 17.3% raising the issue of racism. There was less talk focused on lies or hypocrisy though.

While the volume of positive things people had to say about this video is much smaller, it’s interesting to see what supporters decided to focus on when seeing that the apology video was failing to assuage the vast majority of the audience. 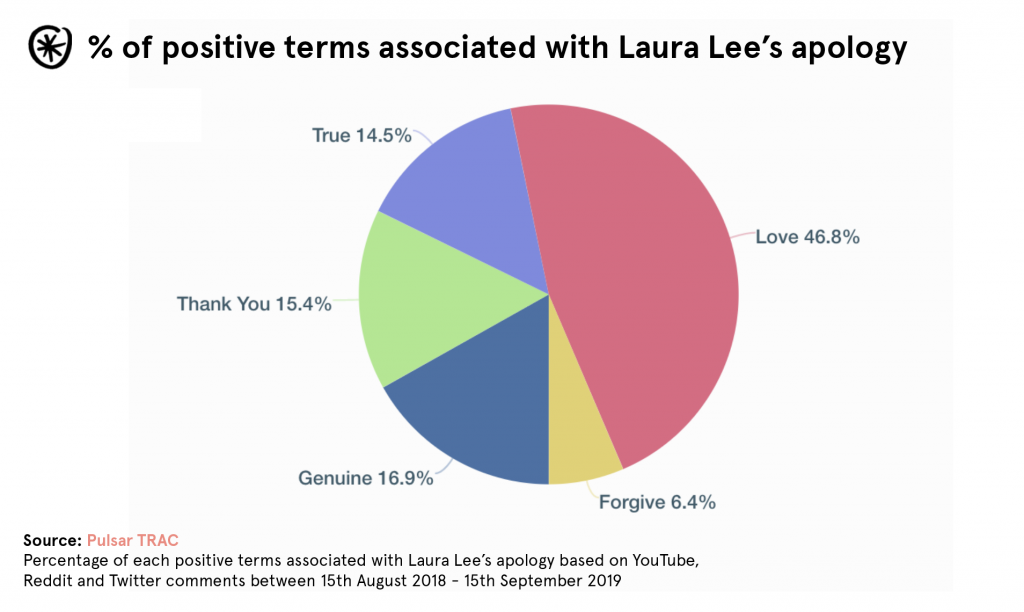 By looking at the positive terms used in the comments, we discovered that 17.1% of people using these terms found her apology video to be “genuine”. Interestingly, we also found that a large portion of comments focused around Love, yet a very small portion were ready to talk about forgiveness.

This suggests many of Laura’s fans were quick to defend her – but less inclined to offer their forgiveness for something that was clearly very difficult to move on from.

By the end of 2018 Laura Lee had lost 600k subscribers since the beginning of her apology fiasco. She continues to upload, but has never fully recovered her subscriber count.

But what about good apology videos? What makes them successful at stemming the audience outflow, and turning the tide?

YouTube’s top solo creator for many years, based on subscriptions, Pewdiepie has actively courted controversy throughout his career, enough to convince YouTube to not feature him in Rewind, its annual recap video (a move that backfired – his absence helped turn that video in the most disliked video in history).

On 12th September 2017, after using racist language during a gaming live stream, he released an apology video that had an overwhelmingly positive response.

Despite achieving his smallest new subscriber count in any month from the last 3 years in September 2017 (via Social Blade), Pewdiepie’s apology video was well received – with 843,649 likes compared to 69,365 dislikes as of today.

Looking at the comments, the recurring theme that succeeded was his approach, one that contradicts other apology videos, by being short and to-the-point. This was pointed out and agreed with by many in the comments section of the video:

Or in other words…