In case you hadn’t noticed, Twitter doesn’t have a ‘dislike’ reaction button.

But one surefire way of showing that a tweet is unpopular is it getting ratioed (also spelt ratio’d).

The term, coined in early 2017, refers to a noticeably brutal ratio of replies to a tweet, compared to supportive RTs and likes. Here’s one:

Seriously what's the appropriate reason for a married person to go out for a meal alone with a member of the other sex (outside of family)?

A ratioed tweet is an organic, Twitter-native indicator of how poorly your message resonated with your audience.

Over the past two years, the word has entered our vocabulary (the dictionaries are talking about it) and it has taken off on Twitter. Here’s how often people are talkin’ ratios: 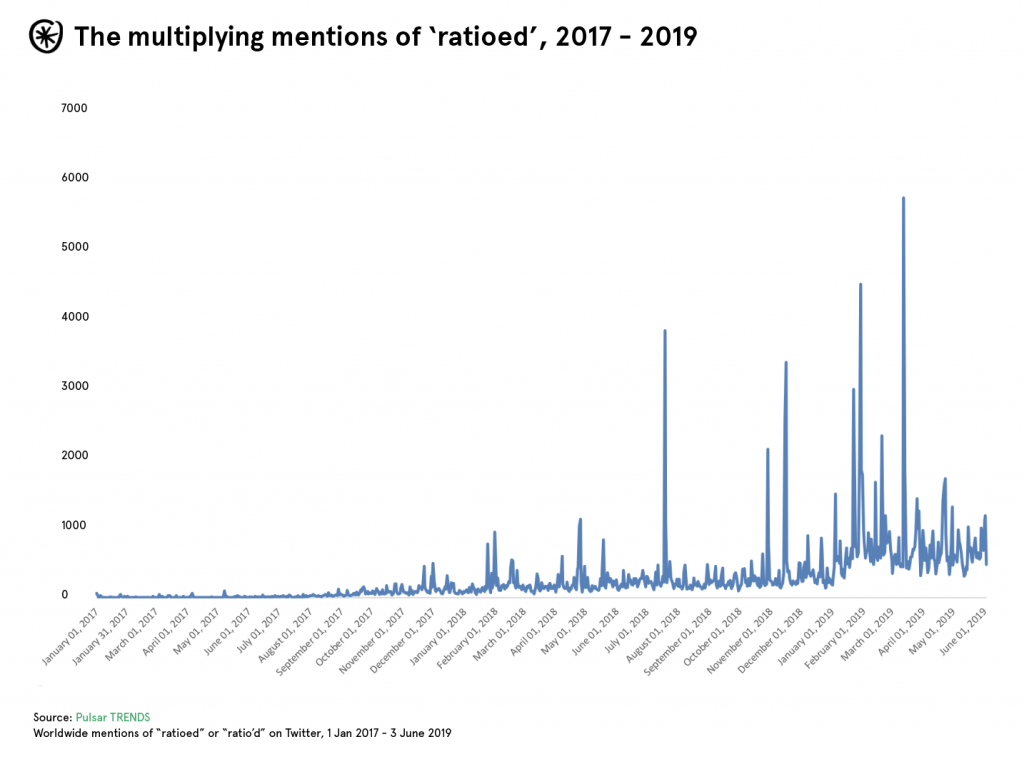 But on social networks popularity often causes phenomena to mutate: in this case, ratioing is undergoing severe inflation.

Ratios are remarkable because they are dramatic: it’s much easier to like and retweet than it is to reply, so for a tweet to amass large amounts of negative comments.. it has to be pretty bad.

That’s an incorrect use of the word mansplaining. :-). Not that I want to legitimize the term, but by its own definition it requires more than just having just a man who is explaining something. Even if some in the audience are women.

But just how many replies to likes/RTs does one need to enter ratio territory? Meme bible KnowYourMeme says a ratio happens when “replies to a tweet greatly outnumbers the amount of retweets and likes.” So maybe twice as many?

If the Replies:RT ratio is greater than 2:1, you done messed up.

Our research director Jess Owens tried to quantify the worst ratios out there, and found a ceiling: 216 to 1.

At 216 to 1, this may be one of the worst ratios in the history of being ratioed pic.twitter.com/WGjavKQxKr

What we are seeing today is some sort of ratio inflation, with people actively scouting for ratios –even when they are less than remarkable– and in some cases even trying to engineer ratios on tweets they disagree with, in order to tar the author with the shame of being ratioed.

Not that it matters, but it doesn't count as being "ratioed" if more people liked or retweeted your tweet than commented.. pic.twitter.com/VwkaKMkIIA

Another indicator of ratio-inflation? News outlets starting to rely on the ratio as the basis of articles about what’s happening on Twitter.

The ubiquity of ratios means that the shame that comes with being ratioed is decreasing. Users with ratioed tweets used to be seen as the most clueless and out of touch, but when it becomes as common, and possibly staged by your enemies, that perception changes.

How is this not ratioed?

Ratioing, seems to be on the verge of becoming just another form of Twitter pile on.

That said, American Catholic priests over the past few days seem to be working very hard to bring true ratios back in vogue.

A reminder that Catholics should not support or attend LGBTQ “Pride Month” events held in June. They promote a culture and encourage activities that are contrary to Catholic faith and morals. They are especially harmful for children.

Please stop labeling bishops who speak the truth of the Gospel as homophobic. God gave us sexual intimacy for the procreation of children and the deeper union of a man & woman in marriage. Stating this truth is not homophobia, it is simply reality. https://t.co/71to9rU4A0