Why memes matter: our best shot to talk about the world in the post-truth era 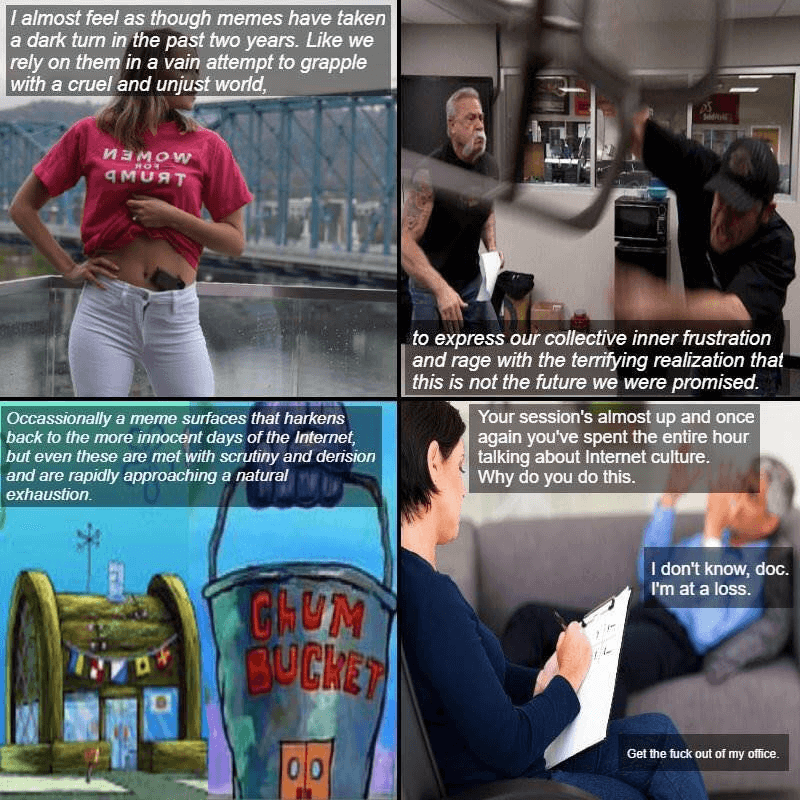 We have entered a post-truth, post-authenticity era, in which dichotomies like true/false or real/fake no longer serve us very well, especially on social media platforms.

In this excerpt from the Medium essay Post Authenticity and the Ironic Truths of Meme Culture, Pulsar Research Director Jess Owens (@hautepop) explains how memes have emerged as a new way to explore and distribute nuanced, complex truths.

“Generations” are a bullshit marketing concept, right? Except all of us looking at the remarkable teenagers of Parkland High School and their astonishing media-campaigning ways are also aware that damn, something’s different about kids today.

For the last two or three years I’ve been doing a bit of work for a tech company client on understanding first Millennials and then Generation Z: what are they doing, how are they different, and what makes them tick. For Generation Z — born in 2000 onward — there are two interesting, seemingly-opposite cultural tendencies in play.

On the one hand, they’re the Sensible Generation. Every measure of risk-taking behaviour is down, across the US and Europe: drinking, smoking, drug use, early sexual activity and teenage pregnancy. Spurred on by the prospect of massive educational debt, they try harder in school and have heart-breakingly modest and, well, sensible aspirations for their future lives.

On the other hand…

Let me introduce you to a cultural goldmine. In September last year, an AskReddit thread enquired, “Teens of Reddit, what is considered cool right now?”

The answers are brilliant:

idk what else but those are the basics lol.”

The most up-voted answers stressed irony as a fundamental orientation:

Teenagers may be shifting away from posting Facebook status updates — partly because Facebook is where your mum & your aunties are hanging out — but one part of Facebook is thriving: Groups. Zuckerberg emphasised Groups in his ‘Building Global Community’ strategy last year, with a putatively-civic-minded goal to “strengthen people’s online and offline connections.” But he probably wasn’t thinking of groups like these: 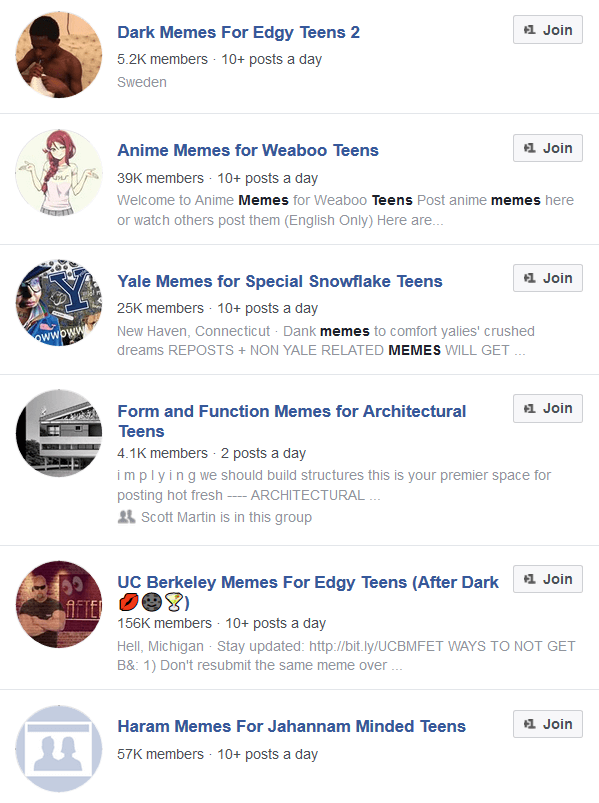 Frequented mostly by an audience under 25, many of these groups are just sharing funny, ironic, meme-y content. Roots lie in what was called Weird Facebook — as documented by Jordan Pedersen in 2014, the group Shit Memes then had 30,000 followers, and was one of the bigger groups around. Prior to that, internet meme culture in the period 2008–2012 was being heavily driven by 4chan /b/ board, as Whitney Philips notes in This is Why We Can’t Have Nice Things (2015).

But in the last couple of years, the Facebook meme group really took off. Articles started being written like ‘The Rise of Weird Facebook: How the World’s Biggest Social Network Became Cool Again (and Why It Matters)’ (Hudson Hongo, July 2016) and ‘The Future of College Is Facebook Meme Groups’ (Paris Martineau, July 2017)

College and university meme groups are particularly interesting spaces, because here the seriousness and the memeyness of the present generation of youth culture intersect, to often startling degree.

Sometimes it’s simply very educational, such as in groups like NUMTOTs: New Urbanist Memes for Transit-Oriented Teens, with 70K+ members). This group mixes an irrepressable repurposing of other internet meme forms, from dog meme vocabulary where every thing is a ‘boi’ — “Sad reaccs only for this r e p l a c e m e n t b o i” replacement bus service — with contemporary meme formats such as this week’s American Chopper meme made into a debate about Shinkansen vs. Maglev trains, alongside serious discussion about the reforms needed to the transportation systems and urban planning of American cities.

One testimonial notes: “I joined this group expecting memes and all I got was the equivalent of a bachelor’s in urban planning.”

But teenagers are using humour and irony — through the form of memes — to find ways to face up to and discuss deeper stresses and anxieties, too.

My alma mater, the careers-obsessed cultural desert that is the London School of Economics, has a good line in memes which are almost entirely about the pressures students face in their studying and to get a good job (read: a banking or consultancy job) after graduation. 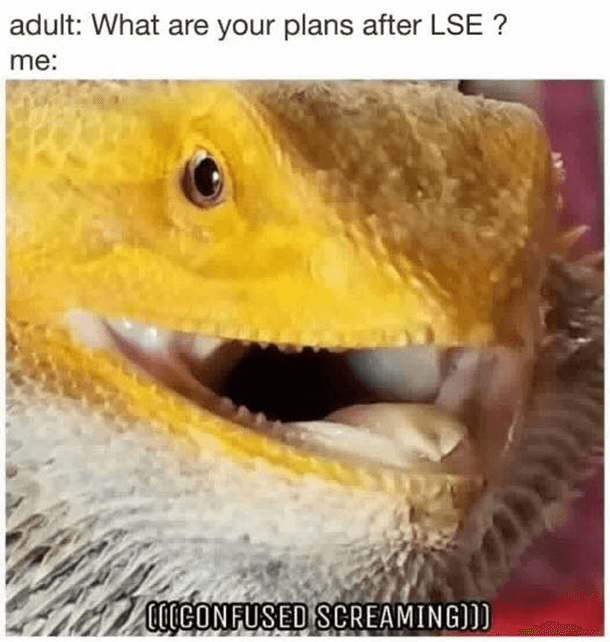 The LSE Memes admin gives barbed benedictions to its anonymous contributors: “May they become one of our top banking lizard overlords”, “May their hourly consultancy rate collapse a small country’s economy”, and “May she get an unconditional offer from Rothschild so none of this matters.” The irony here is complex, capturing the students’ ambitions and their doubts and their critics, all at once.

Meanwhile, groups like Nihilistic Memes (1.9M followers) and Dank Memes (890K followers) are some of the biggest in Facebook, trafficking in — again — a kind of doomy empathy: 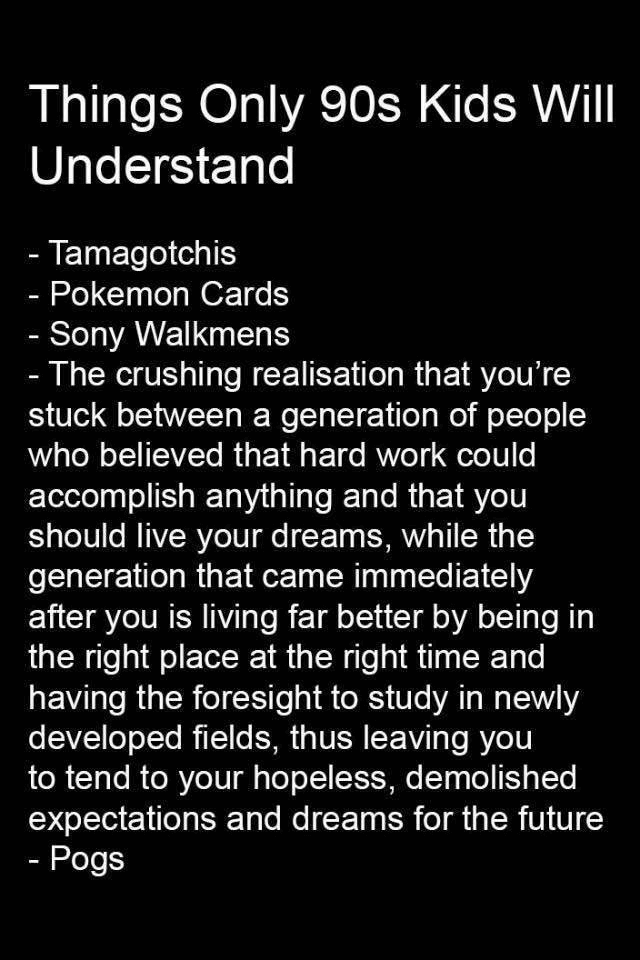 What’s going on? Paris Martineau interviewed some of the founders of college meme groups for New York magazine last year. The admins emphasise the empathetic function of the communities they have created: “My friends and I always say that memes come from a place of stress and anxiety,” notes Ephraim Sutherland, co-founder of Yale Memes for Special Snowflake Teens.

And “Before the page, I had never seen anyone get together and talk about these issues,” Tril of UC Berkeley Memes for Edgy Teens recalled. “Now, I feel like people aren’t afraid to talk about them out in the open.”

So through humour, and exaggeration, and irony — a kind of truth emerges about how people are feeling. A truth that they may not have felt able to express straight. And there’s more community here as in many of the more traditionally civic-oriented Groups Zuckerberg’s strategy may have had in mind.

The formal properties of the meme make it a particularly effective format for delivering an indirect payload of empathy.

A major vector in meme content in the past couple of years has been “relatability”— from the “Common White Girl” @girlposts Twitter account (now suspended for stealing tweets) celebrating the small failings of the everyday basic bitch, to reaction GIFs turning especially expressive gestures into reusable, quotable forms (and particularly appropriating the emotional labour of black women, as Lauren Michele Jackson noted last year). In consuming these memes — in liking and sharing — the social media user is participating in a moment of commonality. They’re saying, “I am like this too.” These memes are predicated on a recognition of human similarities. 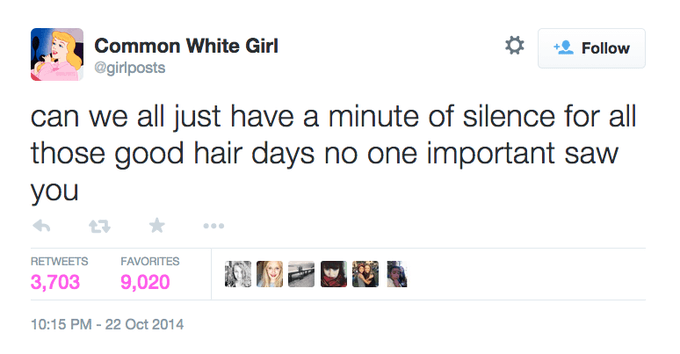 Meme formats—from this week’s American Chopper dialectic model to the ‘Exploding Brain’, ‘Distracted Boyfriend’ and ‘Tag Yourself’ templates—are by their very nature iterative and quotable. That is how the meme functions, through reference to the original context and the memes that have gone before, coupled with creative remixing to speak to a particular audience or topic or moment. Each new instance of a meme is thereby automatically familiar and recognisable. The format carries a meta-message to the audience: “This is familiar, not weird.” And the post-authenticity era audience is pre-prepared to know how to react to this: you like, you “haha” emoji, and you tag your friends in the comments.

The format acts as a kind of Trojan Horse, then, for sharing difficult feelings—because the format pre-primes the audience to respond in a hospitable mode. There isn’t that moment of feeling stuck about how to respond to your friend’s big emotional disclosure, because she hasn’t made the big statement quite directly, but through irony and cultural quotation distanced through memes typically using stock photography (as Leigh Alexander notes) rather than anything as gauche as a picture of oneself. This enables you the viewer to sidestep the full intensity of it in your response, should you choose (but still, crucially, to respond). And also to DM your friend and ask, “Hey, are you alright?” and cut to the realtalk should you so choose, too.

So a space is created, to talk about being stressed and overwhelmed and unsure of the meaning of anything we do—a space which is, I believe, more open than it has been in the past. As the mod of UC Berkeley Memes for Edgy Teens says, this “gets the conversation going, as I don’t think it would have even started without it.”

And this is how memes help people speak truths.