As we announced last year, we joined forces with 4 UK academic institutions to co-found the Visual Social Media Lab, a research programme which is dedicated to studying the impact of social media images. The Lab’s most recent paper, ‘Chatting through Pictures? A Classification of Images Tweeted in one week in the UK and USA‘ was released this week – we thought we’d publish a preview.

Our VP of Product, Francesco D’Orazio (@abc3d)  has been working alongside academics from University of Sheffield, Manchester School of Arts, Warwick University and the University of Wolverhampton to understand how images are used online. Over the past year Visual Social Media Lab has been working on various projects focussed on analysing social media images, these include: The Death of Thatcher on Social Media,  Imaging Sheffield, and Algorithmic Visibility, among others.

Below is an excerpt taken from the ‘Chatting through Pictures?’ paper – it gives an overview of the study and an introduction into the analysis of social media images (you can also read the full paper here):

Twitter is used by a substantial minority of the populations of many countries to share short messages, sometimes including images. Nevertheless, despite some research into specific images, such as selfies, and a few news stories about specific tweeted photographs, little is known about the types of images that are routinely shared. In response, this article reports a content analysis of random samples of 800 images tweeted from the UK or USA during a week at the end of 2014. Although most images were photographs, a substantial minority were hybrid or layered image forms: phone screenshots, collages, captioned pictures, and pictures of text messages. About half were primarily of one or more people, including 10% that were selfies, but a wide variety of other things were also pictured. Some of the images were for advertising or to share a joke but in most cases the purpose of the tweet seemed to be to share the minutiae of daily lives, performing the function of chat or gossip, sometimes in innovative ways. 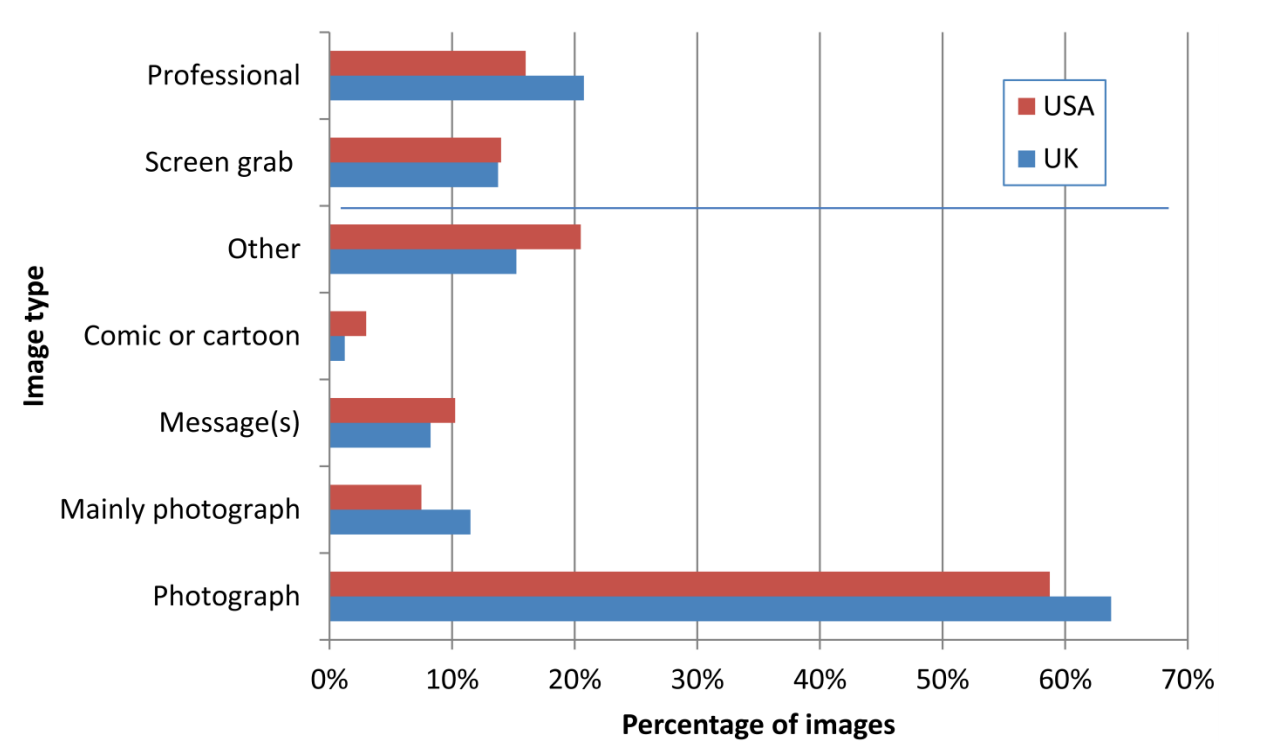 Random US and UK Twitter images categorised by type.

Sharing images through social media is common in richer nations. In 2012, 45% of adult internet users in the USA had posted their own photographs online (67% of those aged 18- 29) and 35% had shared photographs created by others (52% of those aged 18-29) (Rainie, Brenner, & Purcell, 2012). In the USA in 2013, 17% of adults on the internet used Twitter and 71% used Facebook, both of which can be used to share pictures, and 16% used the image sharing site Instagram (Duggan & Smith, 2013). In the UK in 2013, 70% of adults involved in online activities reported sharing images (Dutton, Blank, & Groselj, 2013) and it seems likely that by the end of 2014 the majority of people using internet in both countries had shared images online. Images are particularly likely to get retweeted in Twitter, and hence seem to be an important component of its ecosystem (Rogers, 2014). These statistics, however, do not reveal anything about what types of images are shared and why they are shared.

Press coverage of Twitter sometimes focuses on celebrity users or on public tweets in reaction to major events and news stories. Although there are instances in which the role of images in these activities drew a significant amount of attention (Vis et al., 2013), research projects dedicated to high-profile cases, such as misogynistic abuse on Twitter of Criado-Perez and other women campaigners for a woman to appear on a UK banknote do not necessarily focus on the role and nature of images in these events. While tweeting is a convenient way to share more traditional family or party photography, such everyday image-sharing seems to be overlooked in comparison to the high profile uses of Twitter. This is a serious omission because without this context it is impossible to fully evaluate the significance of the adaptations of visual culture within social media and the birth of the new phenomena that do get noticed, such as photobombing. This context will also inform debates about how image-sharing practices feed into commercial and socio-political uses of images on Twitter.

In response to the lack of general information about the types of images typically shared on social media, this article reports a content analysis of random samples of images tweeted in the USA and UK. Twitter was chosen as one of the most common social media services and one that is frequently used for image sharing. Twitter is also used to share images originally posted in other sites, such as Instagram, Pinterest, Flickr or Tumblr, giving it a central role in the image-sharing ecosystem. The UK and USA were chosen as they are amongst the biggest Twitter users (1st and 4th, according to Alexa.com in February, 2015) and are relatively similar in terms of shared languages and culture, allowing an interesting comparison. 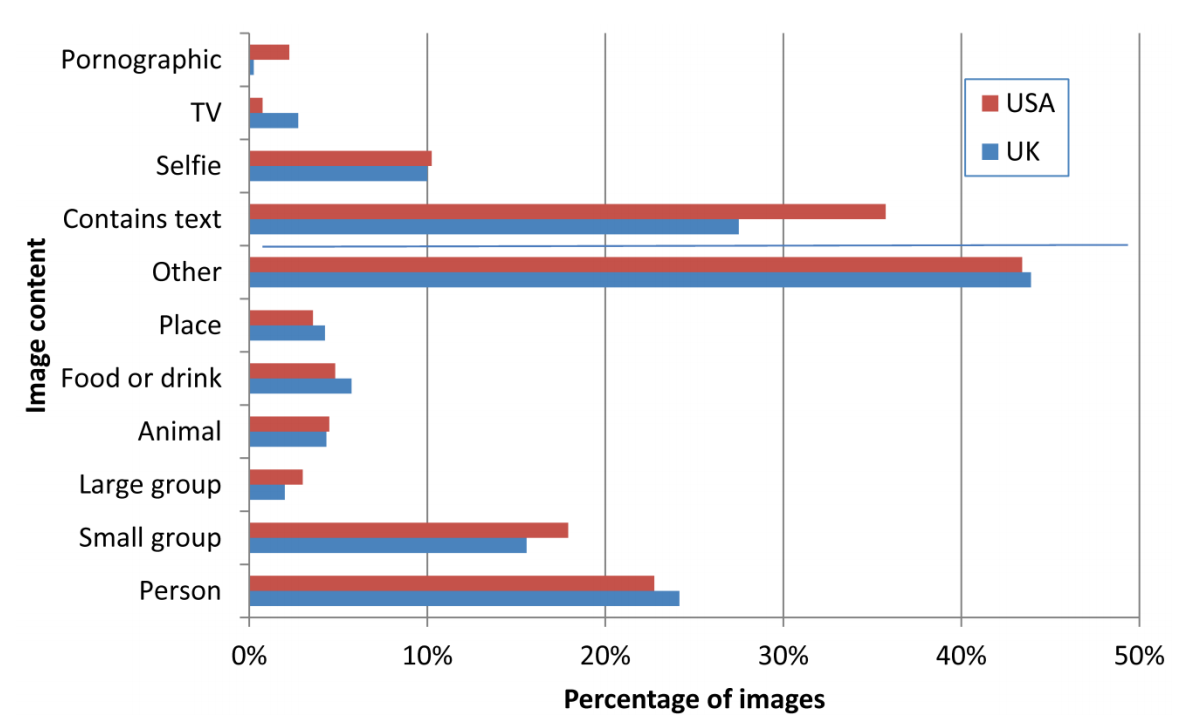 If you would like to demo Pulsar and experience its image analysis feature, please send an email to: [email protected].

Where gaming goes, the world is following
NewNormal 4 June 2020

Brexit’s Disappearance from the News Cycle

A timeline of how the UK's burning political issue vanished from online conversation
Audience Intelligence, in your inbox