Mutating from earnest, to ironic, to critical
Written by Davide Berretta

How did the “most successful” meme go viral? Lessons for viral marketing:

‪Our analysis shows that the virality tipping point for this meme (now at 32 million impressions and counting) was @sarah_edo’s clever spin on @APompliano‘s tweet‬.

‪Here’s a play-by-play of how it spread:

@APompliano’s list of the nine traits of successful people did well early on in its “earnest” version, also thanks to Pomp’s large following in the crypto community.

In yellow: retweets of the original tweets

The size of the bubbles is determined by Pulsar’s proprietary Visibility algorithm, which takes into account a mix of reach and engagement to make sure that we surface the most impactful content.

After Pomp’s initial hit, @sarah_edo “forked” that list, unleashing the ironic potential in this format with this tweet and opening the floodgates:

1. Study daily
2. Eat well
3. Thrive on others
4. Are literal sharks in the ocean
5. Are one of 7 horcruxes
6. Replace their DNA w/ blockchain
7. Have eagles take them to Middle Earth
8. Own 2 dragons, 1 undead
9. Eat only the middle of Oreos https://t.co/QKCcnzzxua

Others pushed the meme further into funny territory.

@KellyCates scored the most successful tweet of this bunch by leveraging the timeless words of Chumbawamba.

This was also the tweet that propelled the ‘successful’ meme to its ‘half-life’ point.

Pulsar VP, Product and Research Francesco D’Orazio explains: “A meme spreads more slowly when it appeals to a more generalist audience, one that is more fragmented than a niche, cohesive audience, so it takes longer for the content to travel from one group of the audience to another.

To understand this, we measure the speed at which a meme gets to 50% of its posts (the half-life of a meme) and in this case, that point was on Friday June 15th, four days after the original tweet on June 10th, telling us that this is a slow meme.

Using our proprietary virality model, we can distinguish between Spiker memes (memes that explore and die in hours) and Growers (memes that go viral in days if not weeks). This is clearly a Grower.”

Here’s a pretty view of how this meme, once it had spread through the network, visualized thanks to Gephi, building on Pulsar TRAC’s graph structure: 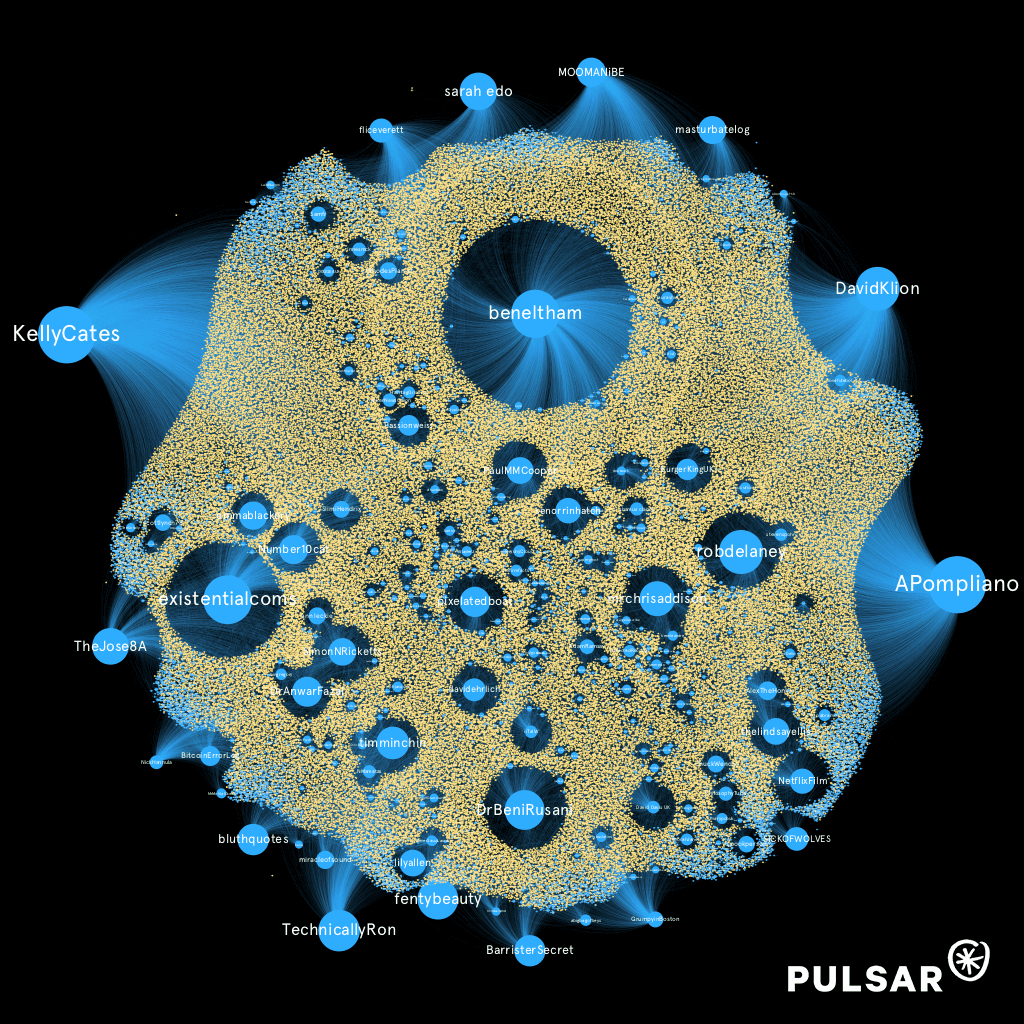 Spread of the ‘most successful’ meme, June 10th – 18th 2018 – Data visualization is to analyzing success of viral marketing

And after @KellyCates‘s tweet was when the brands jumped in.

Props to Rihanna’s @FentyBeauty for scoring this uber-successful interpretation of the meme – without even as much as a like from Rihanna herself (who has over 88M followers).

Honorable mention: Burger King UK – Great example of how brands sometimes ride the wave and introduce their own varial marketing elements into an existing topic

The most successful people I’ve met:

The meme quickly took a more serious turn, evolving into a criticism of capitalism, inherited wealth and our collective definition of success.

@Beneltham and @DavidKlion’s tweets were among the best performing in this category:

1. Were rich
2. That's pretty much it
3. A lot of them were really mediocre
4. Some were actually stupid
5. Most were boring
6. It didn't matter, they were 'succesful'
7. In a capitalist society, wealth determines success
8. $
9. It's money. https://t.co/4TaxWsXIeG

1. Were born between 1945-1960
2. Are white
3. Received debt-free higher educations
4. Have always counted on having publicly/lavishly subsidized retirements and health care
5. Own homes worth 10x what they paid for them
6. Have had "careers" https://t.co/OSGBOCIHhf

And here’s how each tweet we mention fits within the total lifespan of the meme: 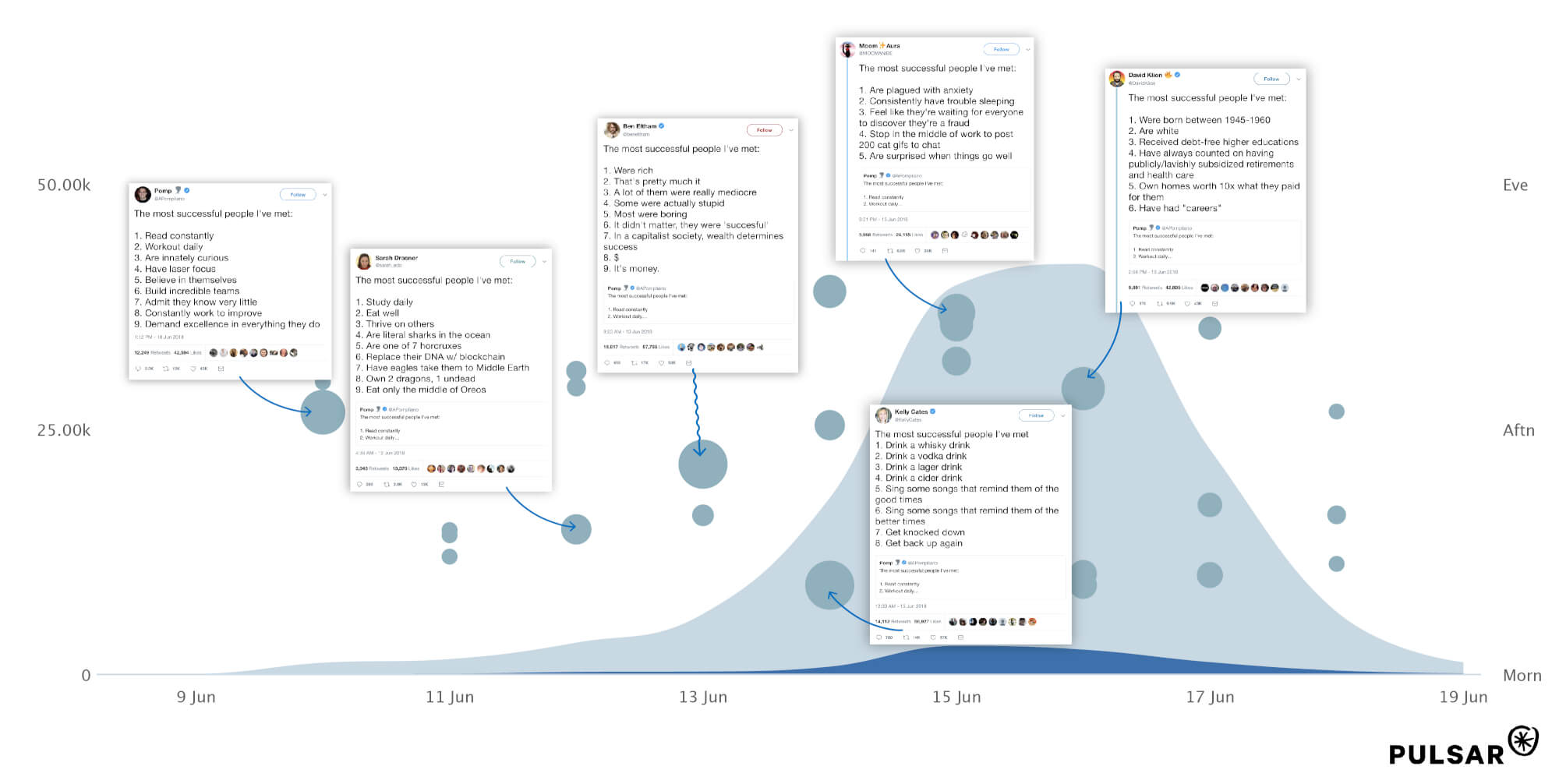 By the way, if you’re looking for official terminology, this meme is a “snowclone” meme: “a cliché and phrasal template that can be used and recognized in multiple variants.” Learn more on Wikipedia or Know Your Meme.

This wild ride was a bit too much for the Pomp though. He reports having received threats, and has decided to take a break from Twitter for a while.

The constant negativity, the ad hominem attacks, the intolerance of others’ opinion, the ETH giveaways and finally, the personal threats today. Just not fun right now.

Which incidentally, is a habit of several successful people we’ve met.