More reopenings mean more things to miss out on

In many countries and cities, as vaccination rates grow and many ease back into daily routines outside of their own homes, the pent-up demand for experiences is bringing with it the resurgence of that ‘Old Normal’ staple: FOMO, or the “fear of missing out”.

The idea that restrictions might be heavily scaled back has reawakened a dormant hunger for experience, across travel, nightlife and elsewhere. And all this is accentuated by the fact that steadily greater numbers are getting to enjoy these things.

It’s a surefire recipe for FOMO, and one that New York Magazine enshrined in this cover story.

The pandemic forced us to simplify our lives and look inward. Now it’s time to have fun again. That should be easy, right? @MatthewSchneier writes on the return of FOMO https://t.co/vkDn5WjtDW pic.twitter.com/N4rfrzZI7L

We thought we’d test this supposition using Pulsar TRENDs, which maps public interest in a term or concept across Twitter. And, sure enough, they were right (which gave us FOMO for not spotting it sooner). 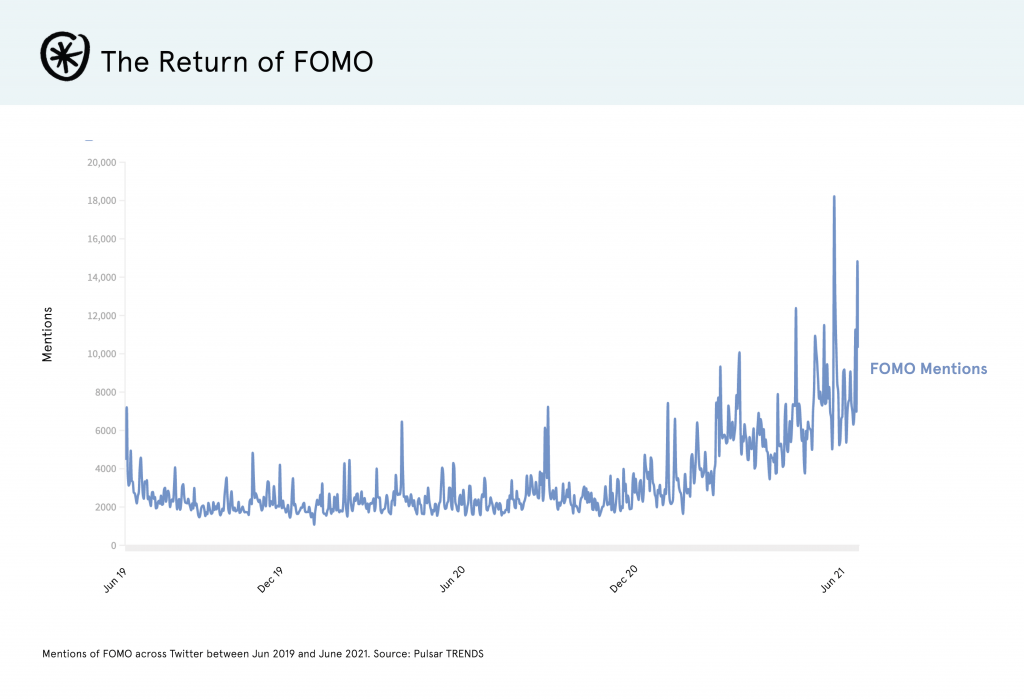 Within the overarching trend, there are clear FOMO subtypes, from straight-up event FOMO:

So much fomo from being unable to be at the shows this weekend, but I’m so happy hardcore is back. Once I’m back to attending and playing, I’ll feel whole again.

To the resurgence of social dynamics that were previously placed on hold by social distancing and lockdown measures:

I’ve been experiencing FOMO seeing friends or people I at least thought I was cool with at large gatherings they didn’t invite me to. But at the same time I don’t want to be in crowds so I probably wouldn’t have gone anyway. It’s weird.

In addition to this, the phrase has also been wholeheartedly picked up by various subcultures.

A couple of decades ago, seeing FOMO within a finance conversation might have led the reader to assume that a new exchange had achieved prominence (Fijian & Oceanic perhaps).

Now, however, the proliferation of retail investing, crypto speculation and other instances of non-traditional finance have bred a new informality, which has pronounced overlaps with meme culture.

I sense a bit of fomo this morning pic.twitter.com/AYzle9TFHt

With the first spate of lockdowns, numerous people discovered a joy in simple, home-bound activities such as bread-making. The current outbreak of FOMO is, perhaps, simply its long-gestating opposite reaction.