What do people complain about to airlines? And which airlines get the most?

People like to complain on Twitter. They also like to complain about the airline customer experience. Mix the two, and you’ll find a lot of passengers ‘taking to Twitter’ to express their anger about anything that’s not going according to plan with their air travel.

Picture the scene: you’re at the airport, your flight keeps getting delayed by 30m with each announcement. The staff are too busy sorting out the delay to listen to you, and everyone around you is at a loss.

Tweeting @the airline seems like an excellent way to express your frustration, and you definitely have the time – and who knows, it might make a difference somewhere down the line.

Hey @United, my new wife and I are trying to get to our honeymoon in Hawaii, but we’ve been delayed over 28 hours. We are beyond dissatisfied and disappointed with the lack of effort to get us there. Maybe @Southwest can get us there faster? Or even Allegiant?

Here’s another pupsetting story (with a happier ending)

Super cool of @AmericanAir to destroy our holiday travel plans because Lou is five pounds over the weight limit. Never had a problem on AA or any other airline, so I sure know which one I'm never booking with again. pic.twitter.com/ny8CSUvU8s

These are common scenarios, and an important topic in both the airline customer experience and in the general travel conversation, so we looked at the 6 airlines carrying the most passengers in the US –American Airlines, Delta, United, Southwest, JetBlue and Alaska Airlines– to see how many social media posts are complaints, and how many are compliments.

Here’s the breakdown of types of tweets sent to the @ (ie @Jetblue) or # (#Jetblue) for the 6 airlines over 10 days in June: 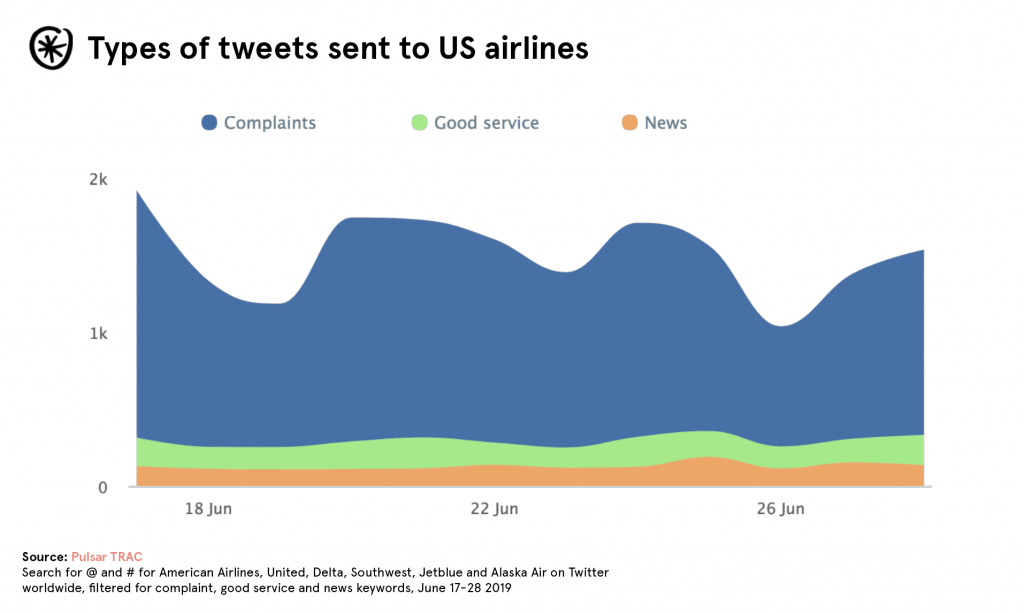 Surprise surprise, the number of complaining tweets made up the lion’s share of this conversation. There were eight times as many complaints compared to posts about good service. News and business posts about the companies themselves were even fewer, making up just under 10% of these mentions of the airlines.

But just what are people so upset about in their air? 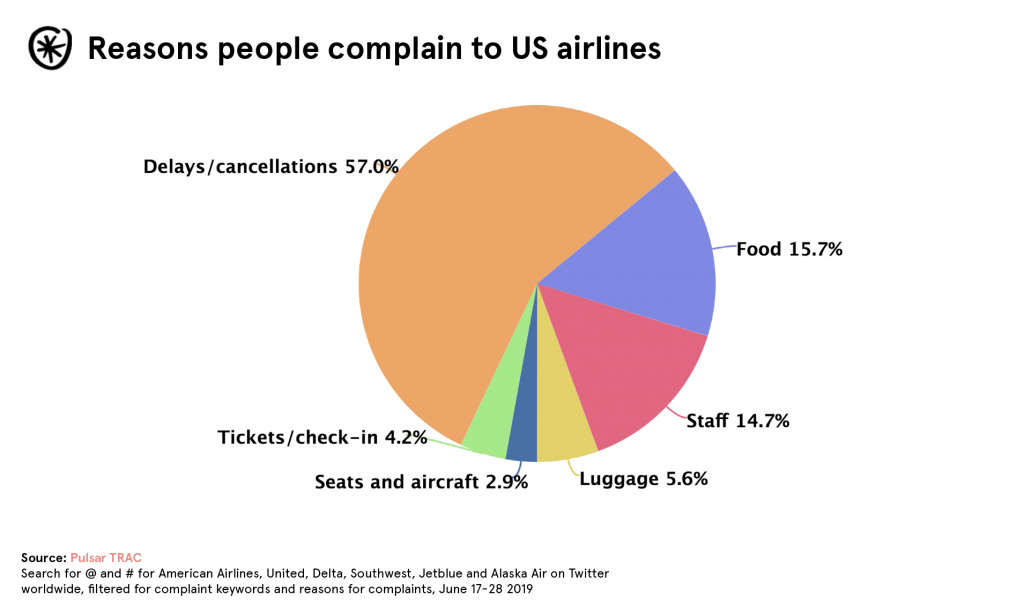 Delays made up more than half (57%) of the complaining conversation, with underwhelming dining options coming up second (15.7%), closely followed by unhelpful staff (14.7%)

Travelers complain throughout the journey, with tickets and check-in processes also showing up in the data, with 4.2% of tweets and luggage woes 5.6%.

So which out of those airline got the most complaints overall? 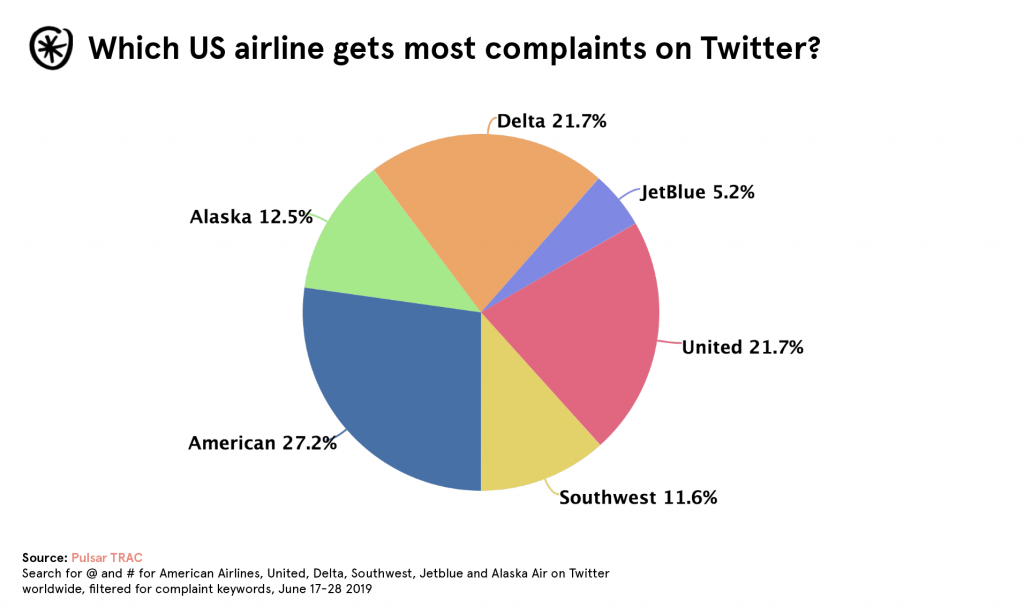 American Airlines comes out on top of this ranking with nearly 27% of complaining tweets, although that is not too surprising, since it is the largest of the 6.

United on the other hand, just the third airline by passenger load, comes in second, racking up almost 22% of complaints: the perception of United as an airline that physically abuses its passengers surely played a part.

If we weigh the number of complaints by passenger load, here is what we get: 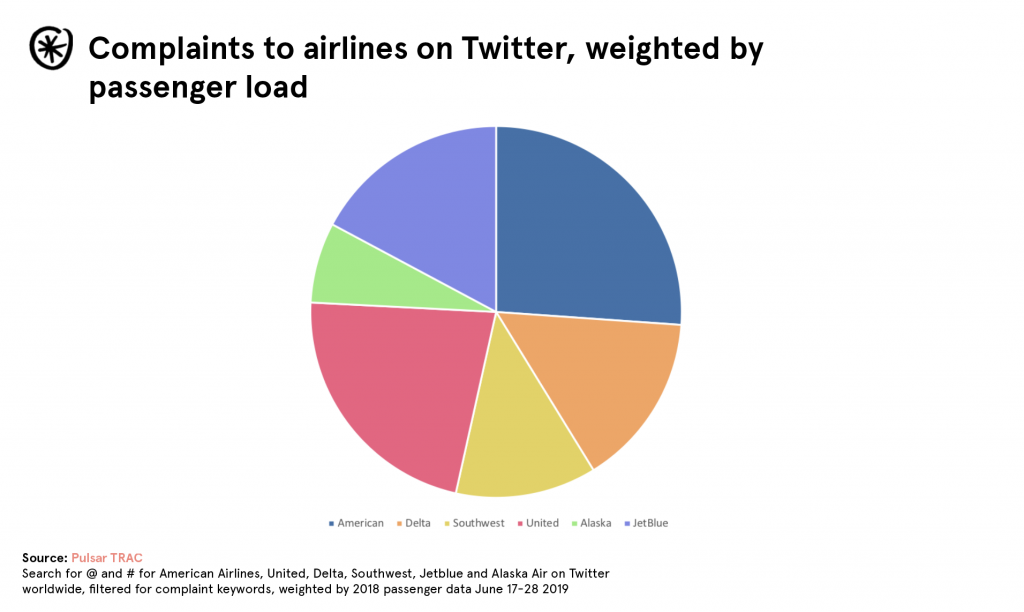 United and American are the most complained @ airlines, while Delta – the second carrier by passenger load, has less than half, coming out as the clear winner amongst the legacy carriers. While Southwest and JetBlue are close to delta in terms of ratios, Alaska airlines comes out of this as the least complained @ US airline out there.

Most of this data matches up well with recent survey data from the American Customer Satisfaction Index, which has Alaska Airlines as the most popular airline in America. The only airline whose Twitter complaints seem to mismatch with its customer satisfaction is JetBlue.

Each airline did “worse” in different categories. Here’s what people are complaining about with regards to American Airlines: 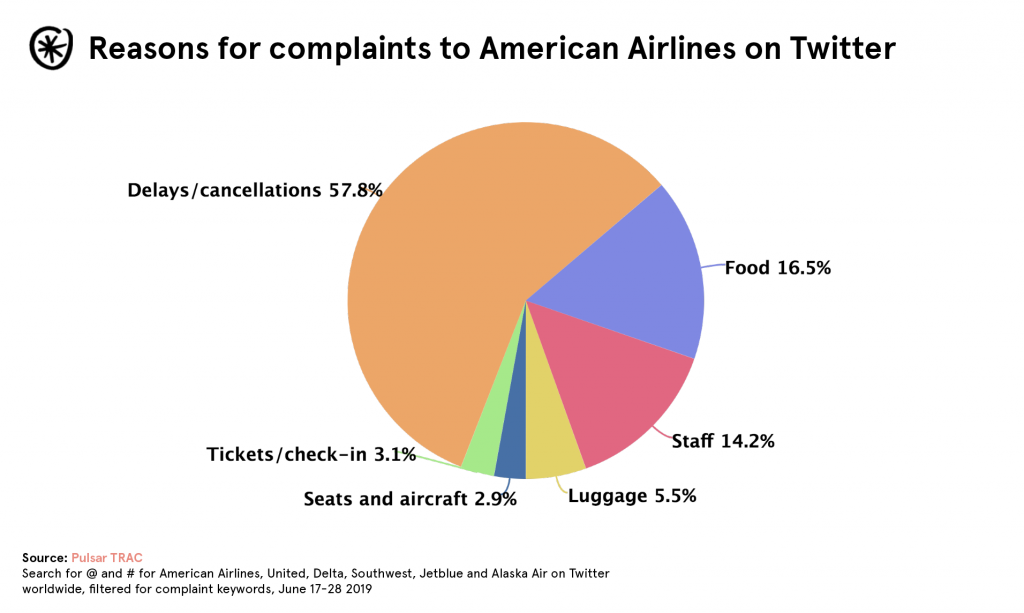 Problems with American are the same problems people have with all the airlines: delays, followed by food then staff and luggage loss, and this is true of all the airlines we studied, although they all seemed to come out on top in the various categories.

AMERICAN AIRLINES DELAYED MY FLIGHT TWICE and now my dad and I are going to MISS THE FIRST EVER BASEBALL GAME IN LONDON -Red Socks vs Yankees !!!!!! I hate you @AmericanAir @Yankees @RedSox #LondonSeries #AmericanAirlines

American also seems to have the worst food of the airlines studied, with 16% of complaint tweets mentioning the food, higher than the other six.

Alaska was not perfect either, seemingly losing the most luggage, and getting 6% of those complaints.

What about good service?

But it’s not all terrible customer experience. Here’s what people liked: 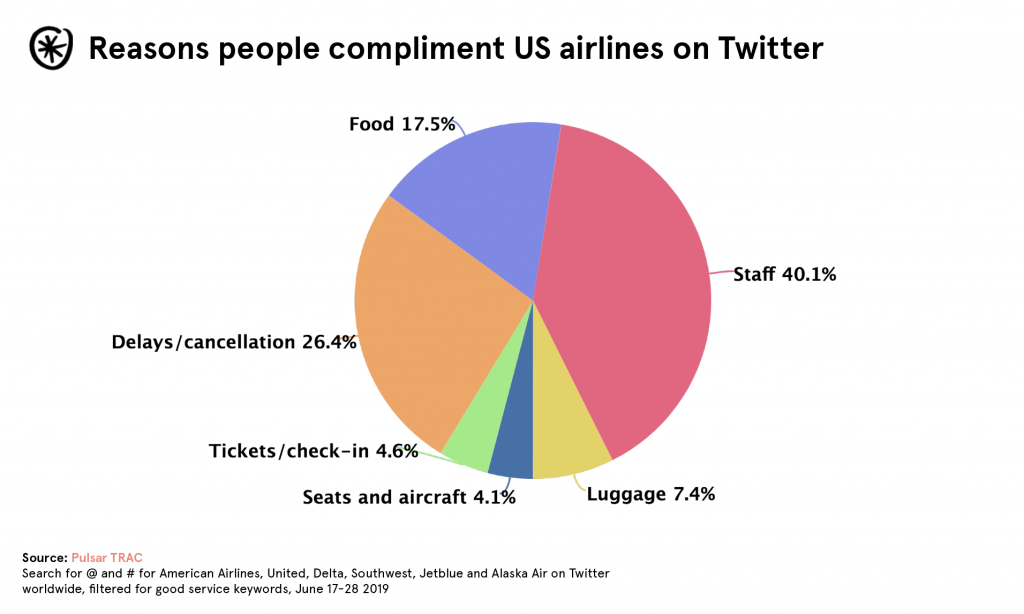 Friendly staff seem to make all the difference for airline passengers, making up 40% of reasons people send a nice tweet to an airline.

Uber impressed by our @united pilot who, in the middle of a weather delay on Flt 676, came out to explain the delay to all the passengers. That’s how you do it!! #kudos #customerservice #neverflythruIAH #thankyou

Finally, one complaint that didn’t feature heavily was sustainability: we expected this to appear in the data, given how that concern has taken over online and social media conversations across industries, from bottled water to clothes and fashion, and that people are starting to flight-shaming globetrotters for excessive polluting.

Perhaps because this problem is a given with flying, and many people are considering to stop flying altogether rather than finding an environmentally friendly airline.

header photo by VanveenJF from Unsplash.