It depends where you look.

Visitors numbers certainly tell one story, but for global museum brands in destination cities, Instagram is increasingly a crucial touchpoint in building long-lasting relationships with their target audience. 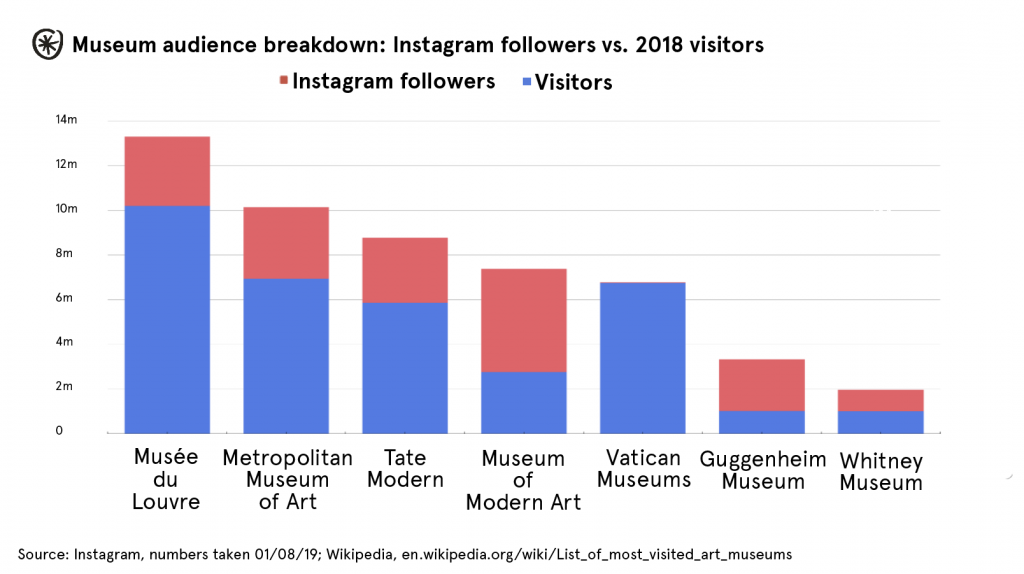 In NYC, the MOMA (Museum of Modern Art – 7m visitors in 2018) and the Met (The Metropolitan Museum of Art   – 2.8m visitors ) have seen an intense decade of competition over funding, spotlight, artwork, and visitors.

While other art museums with cult-like status, like the Guggenheim and the Whitney, attract their fair share of attention, most New Yorkers, and the 65 million yearly tourists making their way to NYC ask themselves one question: Met, or MOMA?

While rivalry has seen the Met taking the lead (MOMA is currently closed down for the summer, undergoing renovations which might give it an edge) competition has for years been playing out in another arena, one that is not geographically bounded. 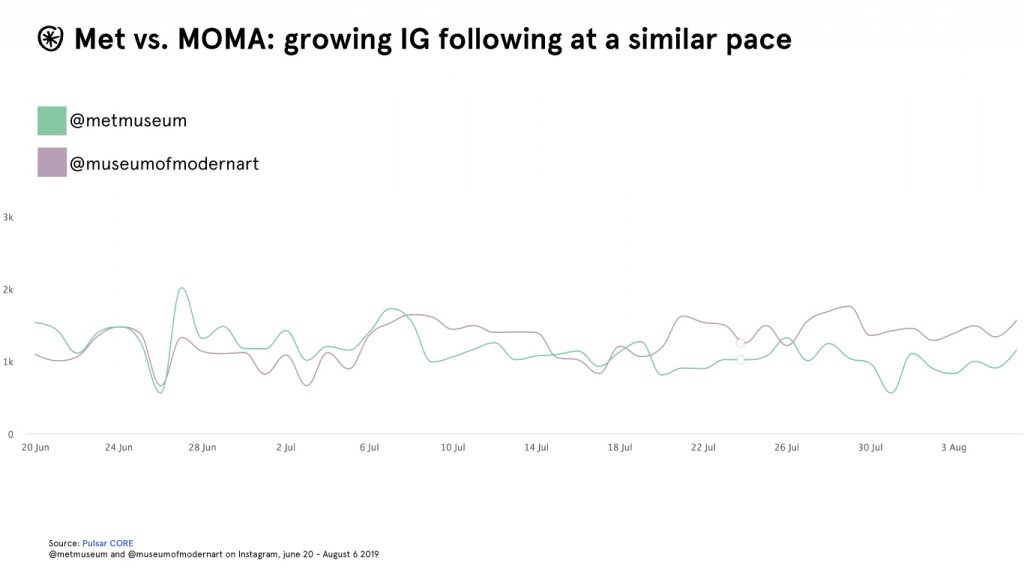 On Instagram – where MOMA is leading with 4.6m followers – both the Met and MOMA are gaining followers at a relatively steady, similar rate of around 1200 per day.

We can see MOMA pulling ahead by a bit, even during this closure: this hints at the fact that the art museum competition on social media plays out almost independently from what is happening in the physical premises.

In Pulsar’s work with museum clients, we have learned that for well-established art museums, social media is a space where to find new audiences to attract to exhibitions and events.  Having these new audiences visit their cultural space brings a new feeling to the space itself, feeding its brand evolution. Social media also a place to find feedback on things like ticket prices, queues, and to project an image of the brand, to an audience who wouldn’t usually engage.

Looking back for the past year using our brand monitoring tool Pulsar CORE, we get a very interesting picture of the strategies that have worked for both museums. 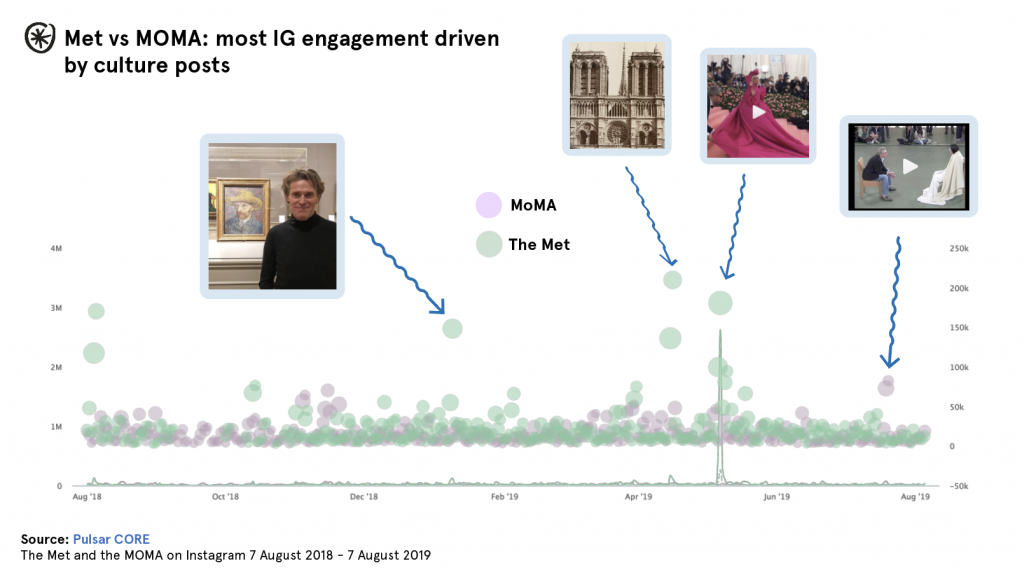 The Met’s most successful Instagram posts engaging with celebrities and broader culture – particularly during the Met Gala. The involvement of celebrities and fashion has gained the museum more followers, and visitors, but could be stretching the museum’s brand away from art.

MOMA, while it hasn’t had as many breakout posts as the Met, has had steady success with posts about its exhibitions past and present, staying ‘on brand’ as a modern art museum. And it’s clearly working, as people are following it at as steady a rate as the Met.

Which types of posts do best for the museums?

The two museums’ most engaged posts paint a very different portrait of why people are interested in their Instagram accounts.

MOMA’s most engaged post in the past 12 months was this retrospective of a groundbreaking exhibition from 2010:

“Nobody could imagine in New York—the most busy place in the world—that anybody would take the time to sit and just engage in [a] mutual gaze with me.” –#MarinaAbramović … In 2010, Abramović staged a new work in our Marron Atrium as part of a larger retrospective titled “The Artist Is Present.” The artist herself sat across from an empty chair. Anyone was welcome to sit across from her for as long as they wanted. By the show’s close, more than 1,500 people sat opposite the artist, lining up for hours to do so; some people even camped outside the Museum overnight. Did you get to sit with Abramović? Share your experience in the comments, and discover more stories from #MoMAhistory at moma.org/momathroughtime (link in bio) #TBT … [Image: Time-lapse images of visitors to the exhibition “Marina Abramović: The Artist Is Present,” March 14–May 31, 2010]

And the Met’s most engaged post was from the Gala:

#MetGala Co-Chair @ladygaga takes camp to a whole other level with four—four!—costume changes on the red carpet.💃 #MetCamp

In order to see like for like, we used Pulsar CORE’s filtering to explore all the posts mentioning exhibitions.

The MOMA’s most engaged post was the same using the exhibitions filter – showing that embracing the gallery’s history was working for their channel.

But the Met’s most engaged ‘exhibition’ posts were both about the recent exhibitions tied to the Gala, again showing the power of the Gala and the Met’s fashion audience that has been brought in from it:

“Camp: Notes on Fashion” opens tomorrow! How did the @metcostumeinstitute prepare these and other beautiful, extravagant garments for the exhibition? 👉 Visit their page to learn about their conservation process and get excited for camp. #MetCamp⁣⁣ ⁣⁣ 👗: Giambattista Valli (Italian, born 1966), fall/winter 2017–18. Courtesy of Giambattista Valli.

Our visual AI also tells us that Instagram posts featuring people were amongst the most engaged for the Met when discussing exhibitions.

So while the Met may be breaking new ground in real life, MOMA still seems to have a slight edge in the rivalry on social media.