Journey of an image: one year on

Exactly one year ago, the body of Alan Kurdi washed ashore on a beach in Bodrum, Turkey.

A Turkish press agency was first to publish pictures of the tragedy online at 8.42AM, and within 12 hours from the first tweet carrying one of them, the pictures had spread from a small, local circle of Turkish journalists and activists to a global audience of millions, thanks to Twitter and the power of the social graph, the platform’s ability to act as a catalyst and bring together like-minded people who care about similar issues. 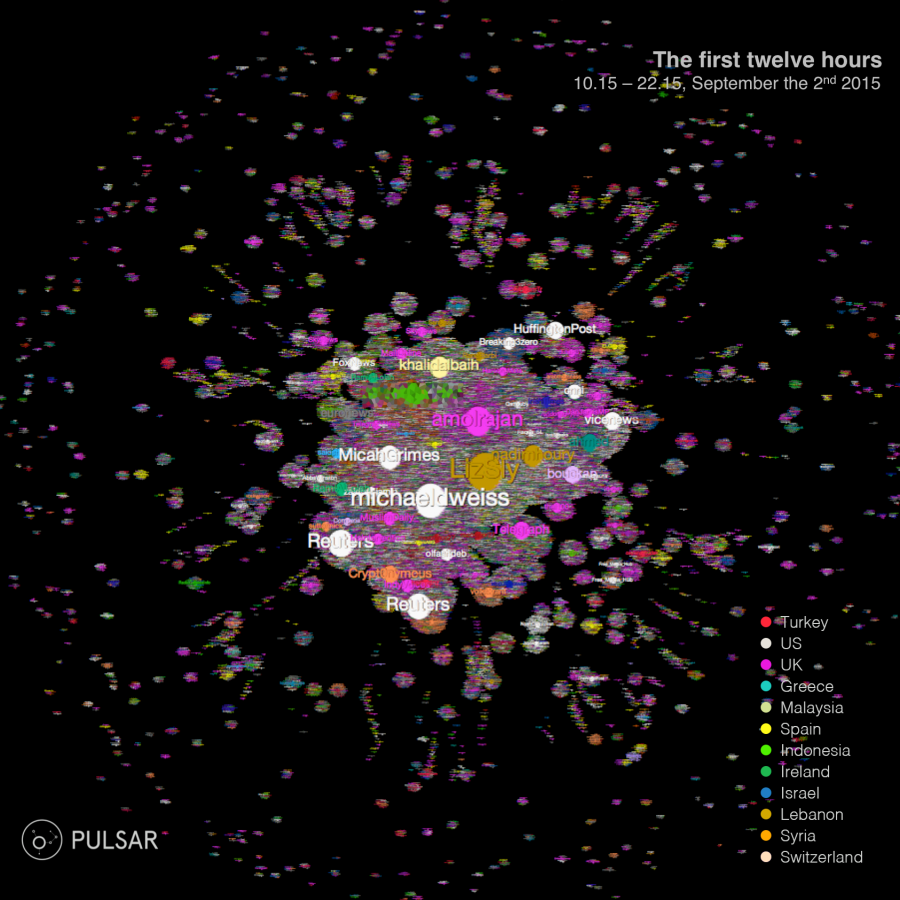 With the Visual Social Media Lab (VSML) we set out to study the impact of those pictures. One of the first things we noticed was that the people commenting on the story on Twitter and Facebook seemed to be using the word ‘refugee’ (rather than ‘migrant’) to describe what was happening a lot more often than before the tragedy. If that was the case, this could have been a signal for a significant shift of perception around the humanitarian crisis and migration in general.

So we looked at how over the previous 12 months the relative use of the words ‘refugee’ and ‘migrant’ on Twitter had changed (globally, English language only).

To make sure we took into account various types of discourse we tracked entities rather than just keywords, so for example instead of tracking simply the word ‘refugee’ we also tracked ‘refugees’, ‘#refugee’, ‘#refugees’.

The data confirmed the shift. While for the previous 12 months ‘migrants’ and ‘refugees’ had been head to head in public conversations on Twitter, accounting for pretty much the same volume of conversation (respectively 6.6M vs 6.1M tweets), from September the 2nd to September 12 usage radically flipped from ‘migrants’ to ‘refugees’ (2.9M vs 6.5M).

That’s a gap of 224%, meaning that in the 10 days following the tragedy, for every tweet mentioning the word ‘migrant’, 2.24 tweets started to mention the word ‘refugee’ instead.

But despite the global public outcry over the death of the three-year old in the Mediterranean, the number of refugees and migrants who have died while trying to reach another country has increased by more than a fifth in the last 12 months.

Today, Oxfam issued a press release VSML and Pulsar have collaborated with Oxfam on, detailing awareness of the crisis and calling on governments globally to step up and commit to taking action to help the refugees. 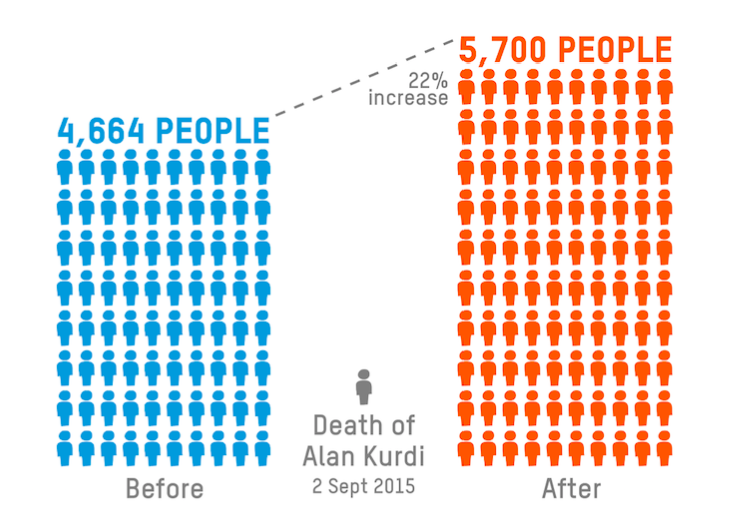 Have we already forgot about the crisis? Did the conversation die out or was it sustain? Did the gap between the ‘migrant’ vs ‘refugee’ conversations widen further or did it go back to pre-Alan Kurdi levels? We ran the analysis again, now on a two years timeframe, to find out.

Crisis awareness: the long-lasting impact of an image 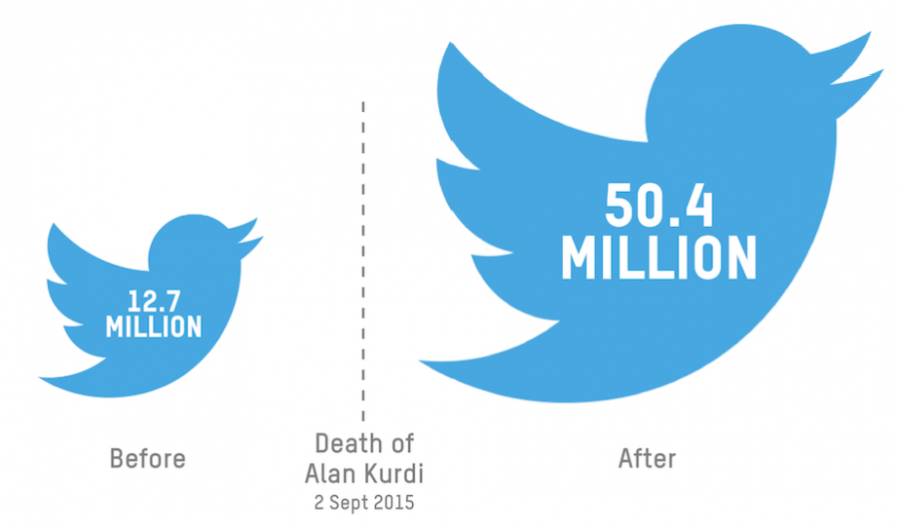 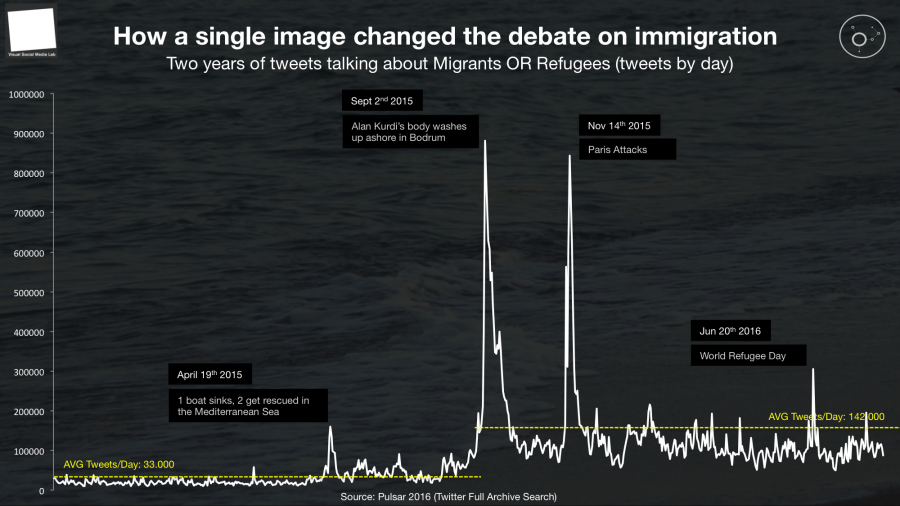 And when looking at search behaviour on Google Trends, we saw a huge 294% increase in the volumes of Google searches about the issue (combined ‘refugee’/’migrant’ queries) with correlating spikes along all the key events of the crisis over the 12 months following the death of Alan Kurdi.

So even though the crisis might have not improved as quickly as one would hope in the last 12 months, the awareness of the crisis has definitely entered a new phase. 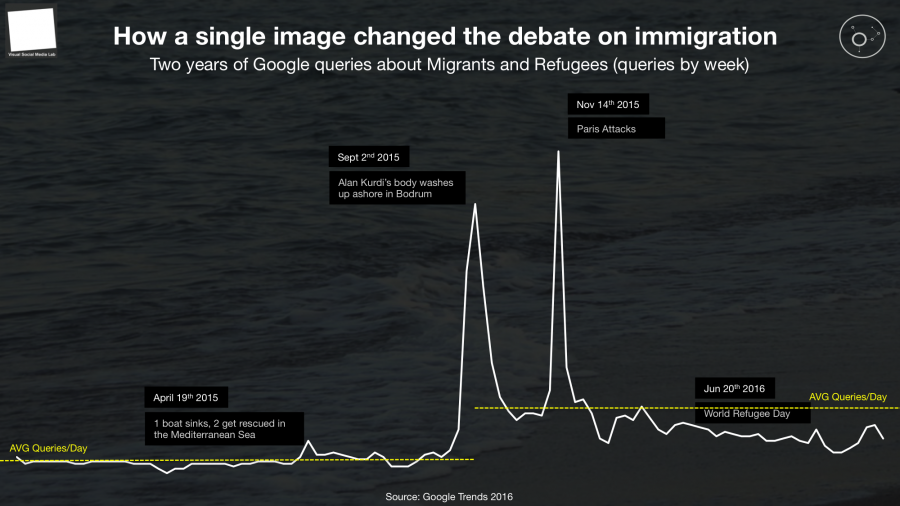 A shift in perception

This rise in awareness is not the only trend that’s persisting 12 months on. The migrant/refugee ratio in public discourse has also continued in favour of the ‘refugee’ conversation.

Over the last two years (18 Aug 2014 / 21 Aug 2016) people have been using the word ‘refugee’ almost twice as much the word ‘migrant’, but the shift really started to occur on the day the images were published and the ratio remained constant for the following 12 months. 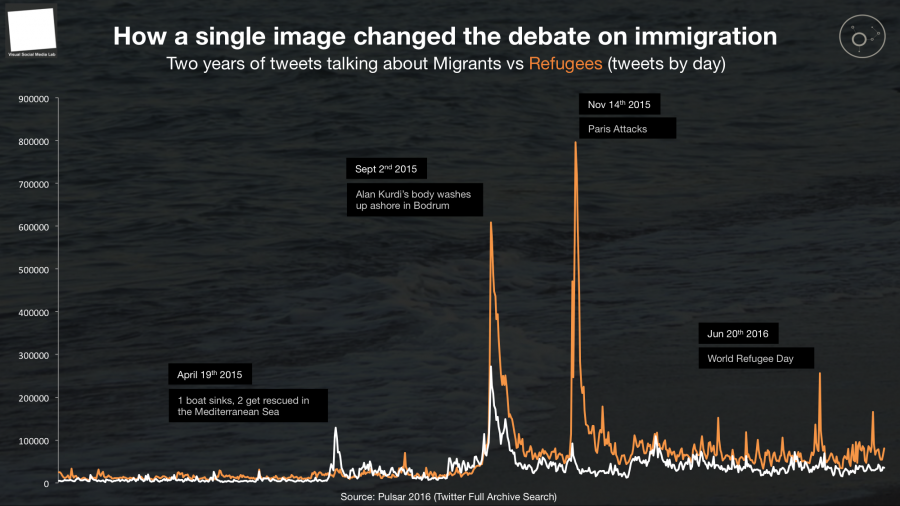 A shift in the perception of the crisis that’s again mirrored by the way people search it. Over the last 12 months (2nd Sept 2015 / 21 Aug 2016), Google queries about ‘refugees’ have increased by 338% while queries about ‘migrants’ only increased by 209% – although it’s interesting to note that ‘refugees’ queries were already almost double the ‘migrants’ queries even before the pictures of Alan Kurdi went viral. 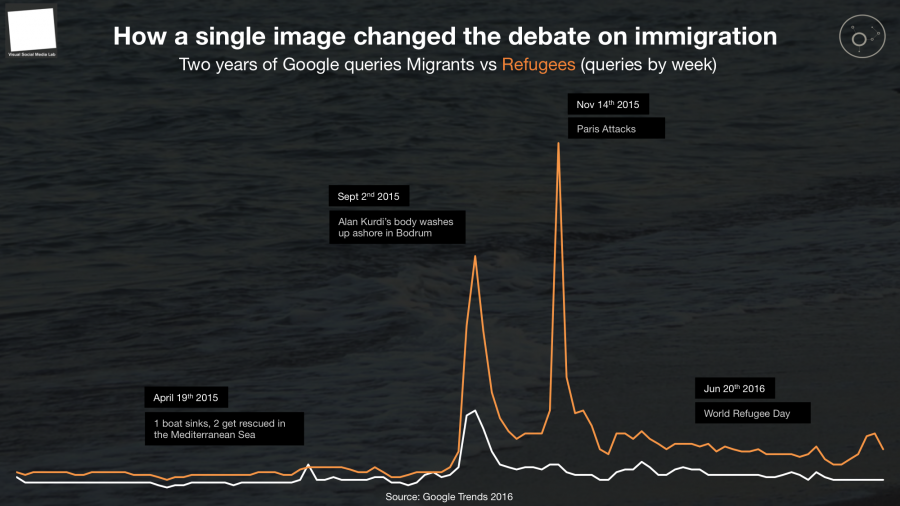 Beyond the news agenda

Now one might argue that it was the news agenda that influenced the way people talk and think about it. So we looked at how much the conversation has shifted from ‘migrants’ to ‘refugees’ in news and blogs. 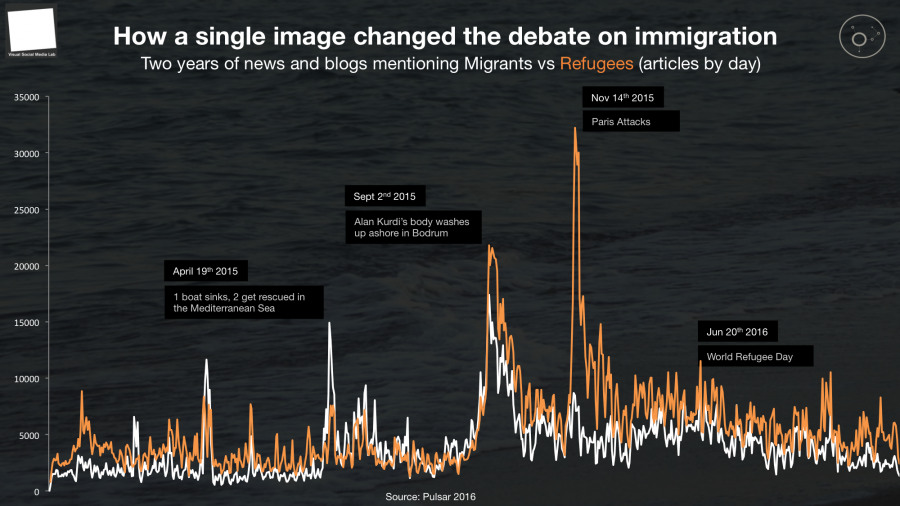 This suggests that while the news agenda played a key role in raising the awareness of the crisis, the shift in the public perception of the crisis has been potentially much deeper and has been echoed and amplified, rather than necessarily anticipated, by the media.

Of course all this could also imply a shift in the semantics of the word ‘refugee’ vs ‘migrant’, but these are changes that play out on a much longer time-scale – and we’ll be focusing the next update of the study on this aspect. Stay tuned.