Appeals and donations are increasingly made online. How has this evolution changed how we give, why we give, and what we give to?

More and more of this conversation is taking place in online spaces, as donation platforms account for an increasingly large proportion of money transferred. At the same time, charities have discovered that online virality can be an indispensable tool for spreading their message far and wide – with GivingTuesday’s journey from hashtag to institution the prime example.

And, as digital strategy becomes increasingly sophisticated, charities are better able to see how this information spreads, into which communities and via what kinds of appeal.

In this study, we used Pulsar TRENDS and TRAC to analyse millions of social posts made around the topic of generosity, to discover:

The growth of the generosity conversation

First, let’s establish extent to which conversation has grown. To illustrate the scale of the change, we’ve set all references to donating behavior against references to mentions of coffee. 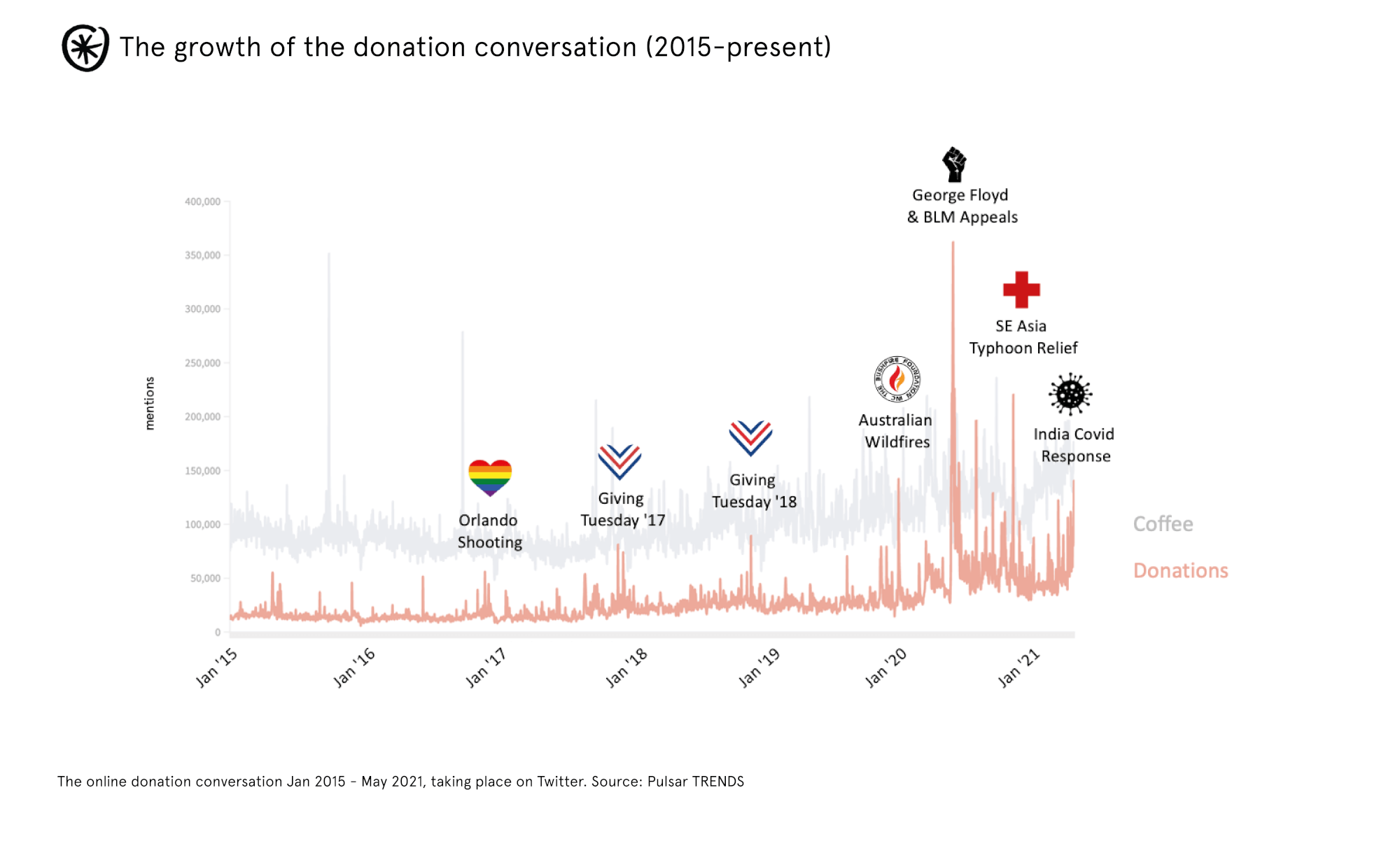 Clearly, GivingTuesday played an important role in popularising the online generosity conversation. At the same time, tragic events and crises often provide the catalyst for immediate spikes. In each case, conversation following the spike resumes at a higher level, in a possible indication that donation behaviors made in a crisis help to normalize the behavior.

The BLM protests of mid-2020 mark both the biggest spike and also the moment at which conversation sustained at its highest pitch. We are currently living through a revolution in how we give and speak about giving.

This change has been enabled in part by a proliferation of online donation platforms, which ensure that there is a tangible outcome linked with the spread of donation posts. 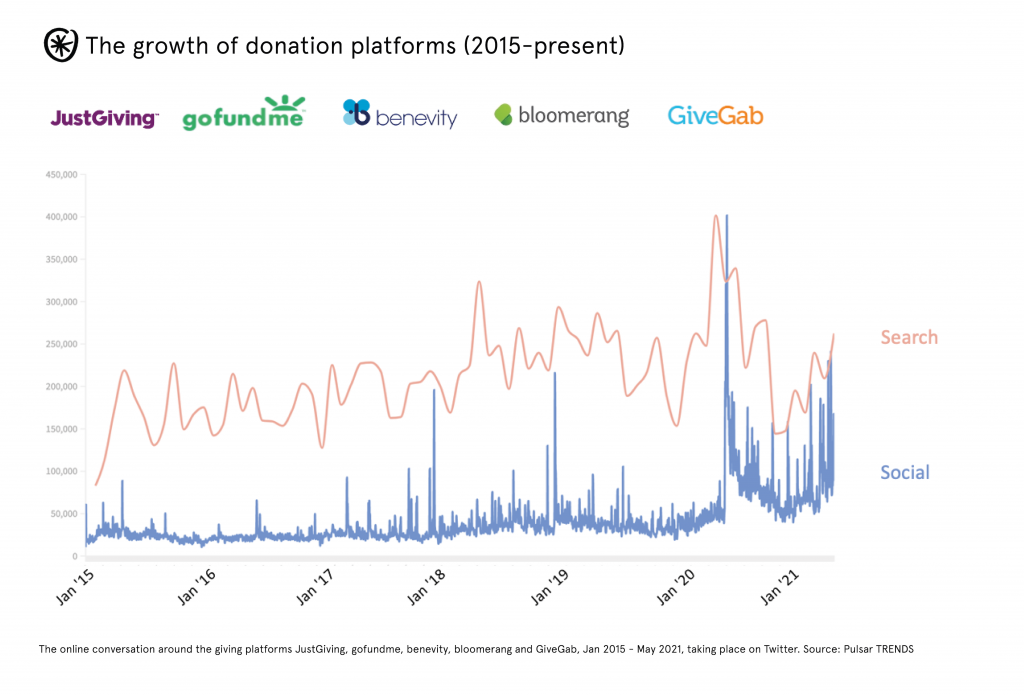 If search volume for these platforms has been set on a somewhat streaky incline since 2015, then the social conversation follows much the same pattern as that of the wider giving conversation. Again, we see pronounced peaks corresponding to Giving Tuesday, and – again – we see a new intensity of volume following the BLM movement.

Which causes dominate our attention?

As real world events impact the number of people engaging with donation as a topic, it follows that the share of voice split between different causes does not remain constant.

A growing conversation means almost every cause returns year on year growth in online interest. But which exert the greatest force on our collective attention?

Using Pulsar TRENDS to track the corresponding period across three distinct timeframes (May-April, which enabled a closer look at 2021) we see that Covid-19 has in many cases either accelerated existing patterns or else inverted them. 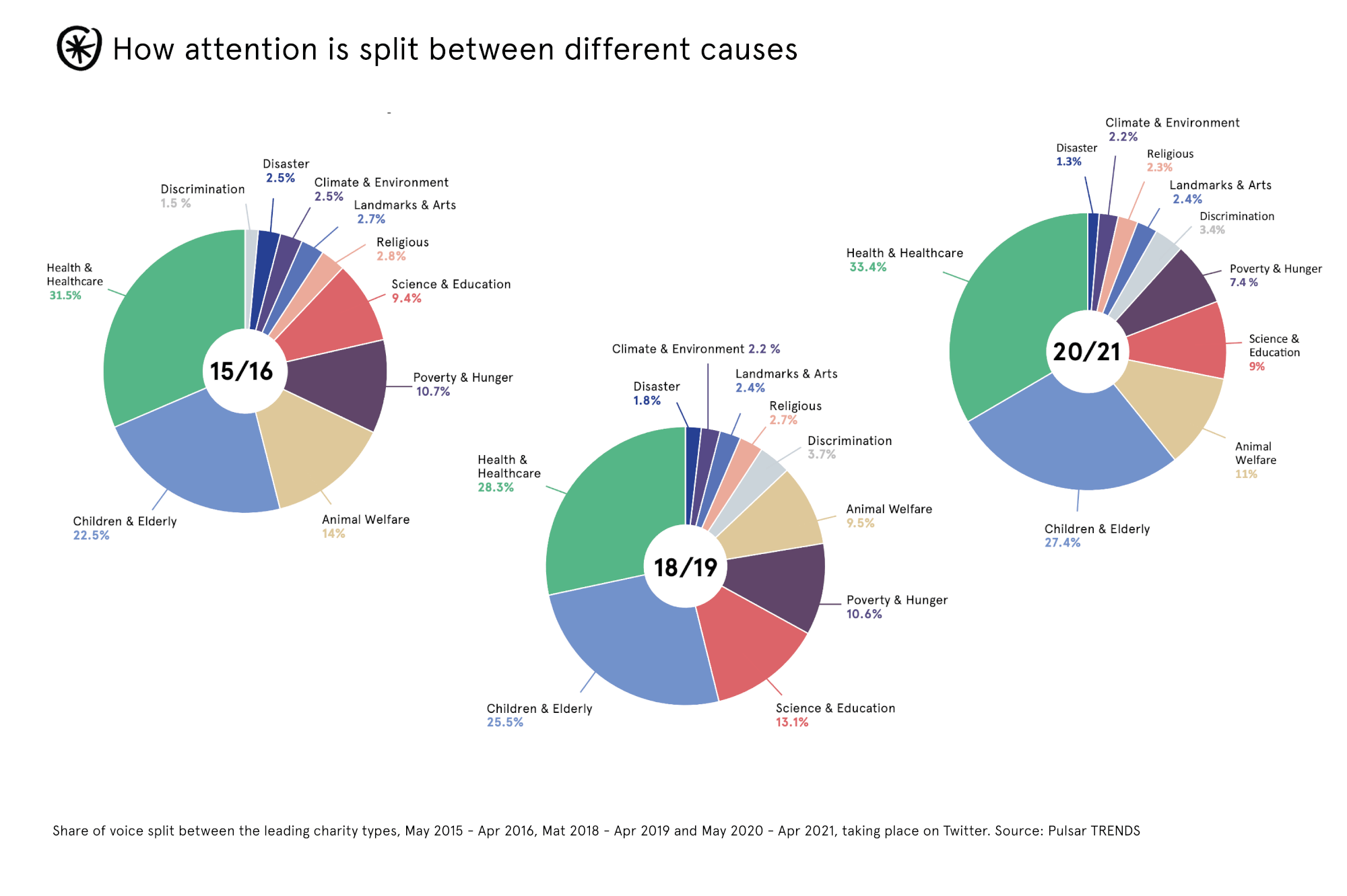 To hone in on several distinct trends:

Of course, this is not the only way of visualizing this shift in attitudes. Again using data from TRENDs, we can track whether these individual causes are ‘Heating Up’ or ‘Cooling Down’ (growing or decreasing in raw volume), and whether they’re Steady or Streaky (consistent interest in a topic versus intermittent bursts of attention).

One key takeaway from this visualisation is how specific causes exhibit certain inherent features.
Disaster, for instance, is streaky, as individual events cause spikes in volume. Children & Elderly, meanwhile, has only grown steadier as a cause as the total number of participants and posts grows. This stands as counterpoint to Animal Welfare, which has grown progressively more streaky as a topic over the same period, with viral videos spotlighting particular animals and causes a likely factor.
Equally, Disaster and Religious charities stand out as the only two to post a decline in levels of volume over any time period. If an inherent streakiness seems the likely cause in the case of the former, then it’s also possible that an increasingly decentralised charity conversation means a lower share of voice for traditional institutions – religious and otherwise.

The perennial question faced by charities is how to best solicit donations. What language do you use? And how does that change from person to person?

By applying syntactical analysis to the donation conversation within three distinct periods, we can see how the Calls to Action made by organisations and individuals alike have shifted over time. 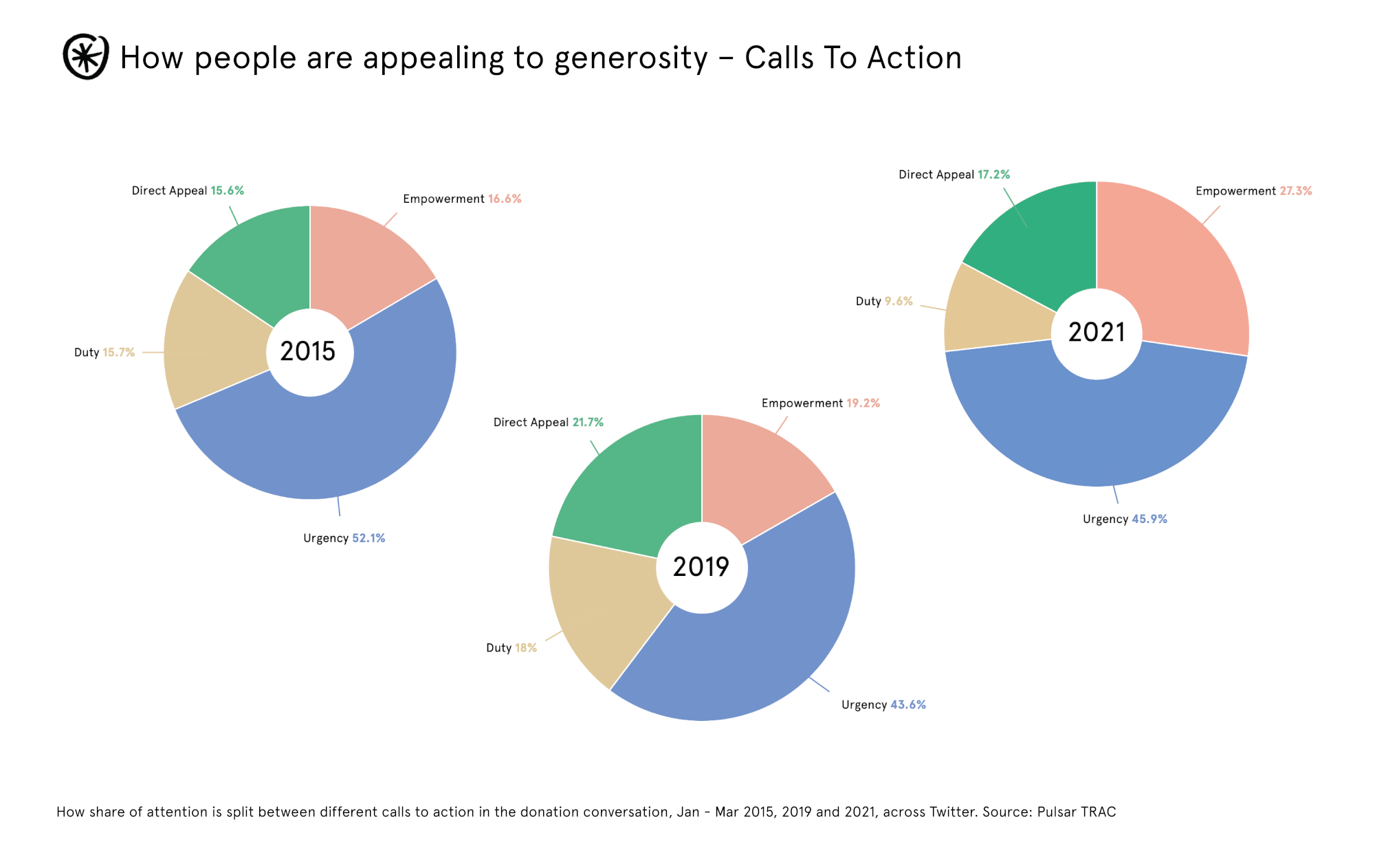 Here, there are two significant trends.

Firstly, Duty as a Call to Action has lessened between 2019 and 2021, suggestive of a process significantly accelerated by Covid.

At the same time, Empowerment has grown. These types of request confer agency and power onto the reader, in tactics that appear closer to the more traditional marketing playbook.

y'all stigma against homeless folks is leaving people dead in the cold… please donate clothes if you got it. please do what you can in your power to help people climate change is REAL, and it's getting colder on record every winter.

But do the same Calls to Action exert the same power on everyone? Emphatically, no.

Different people talk about the same topic differently. Using our Communities integration to first group segments by affinity and behavior, and then discover how these distinct segments engage with the topic, we can see how different Calls to Action resonate with different people online. 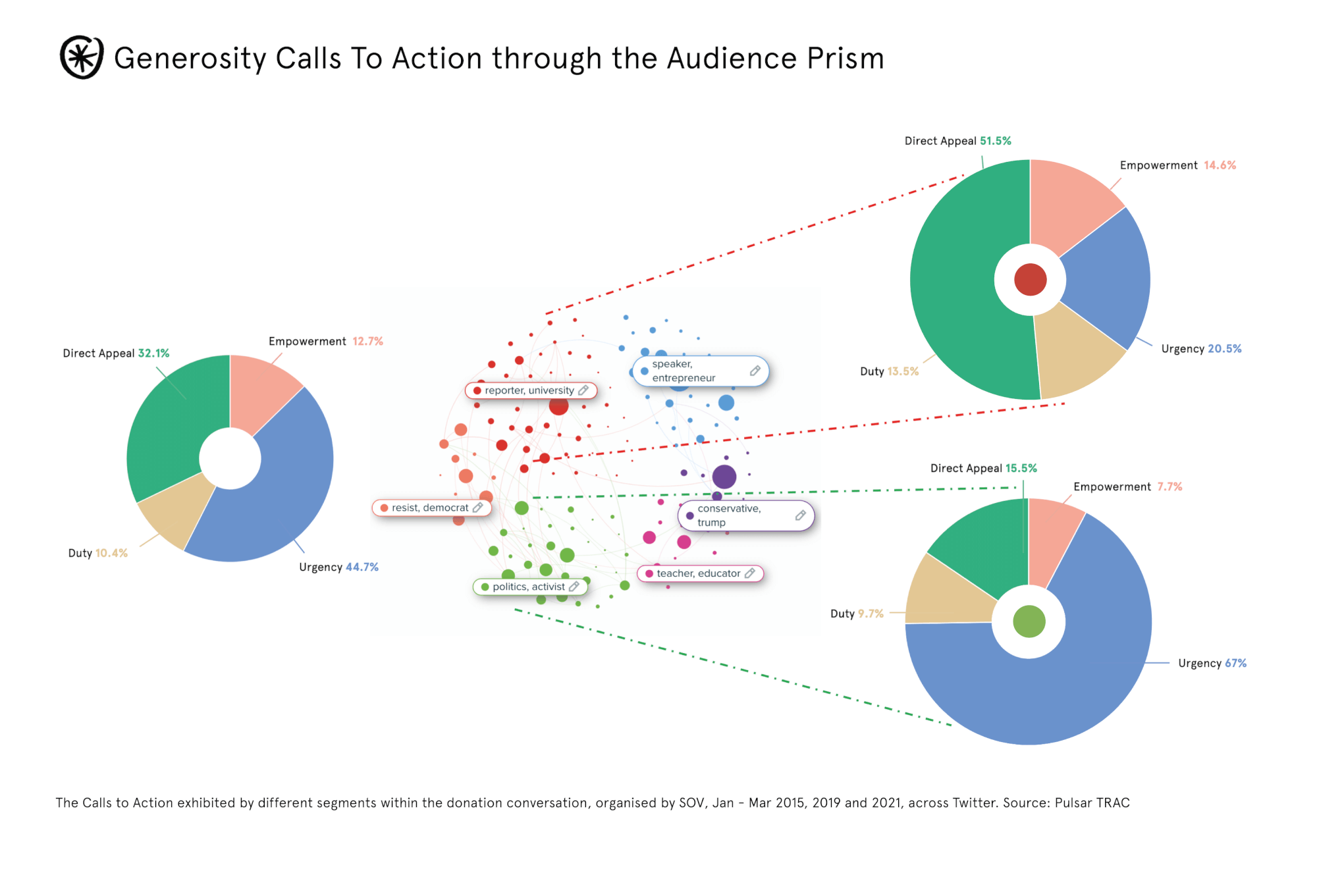 In this case, there are two immediately identifiable trends. Firstly, that a political activist community are inclined to make or amplify appeals couched in urgency. And second, that a young, liberal audience with affinities for current affairs and academia are more likely to engage with direct appeals.

We can also use this same methodology to compare the participants within 2015’s generosity conversation with who is engaging with the topic in 2020. 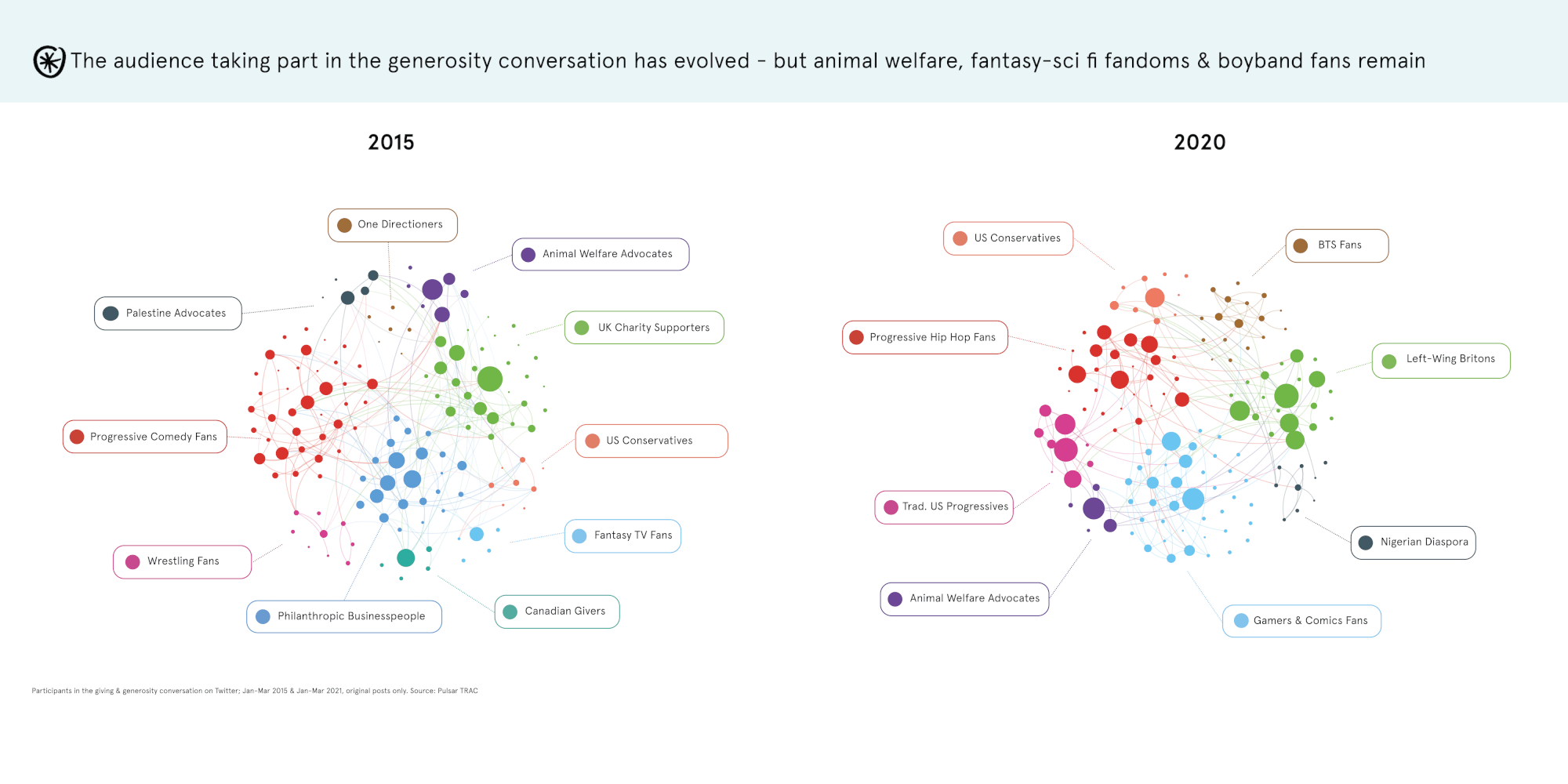 First, the similarities. Because while the precise audience make-up and points of interest may have shifted, there is a shared pattern behind the formation of several audience segments. So, Progressive Comedy Fans share many characteristics with Progressive Hip Hop Fans, likewise Fantasy TV Fans display similarities with Gamers & Comics Fans.

And then there’s the not-inconsequential-matter of boybands. One Direction were a point of common interest for some of 2015’s youngest participants, and their replacement with BTS speaks to both the continued importance of certain fandoms, and how the generosity conversation has evolved.

For one thing, it’s grown much more international. The english-language generosity conversation was once dominated by the US, UK and Canada, and – while the nations still account for the largest percentage of participants – communities with roots in Nigeria, Korea and elsewhere are playing an increasingly important role.

At the same time, the conversation’s growth means that communities that form around single issues have been subsumed into much larger groups organised by affinity, which each contribute members to individual causes.

Naturally, the conversation around generosity is one steeped in emotion.

Inspired by previous work our research team carried out into building a public emotions framework, we looked to identify which emotions dominate the topic of donation, and how these shift over time. 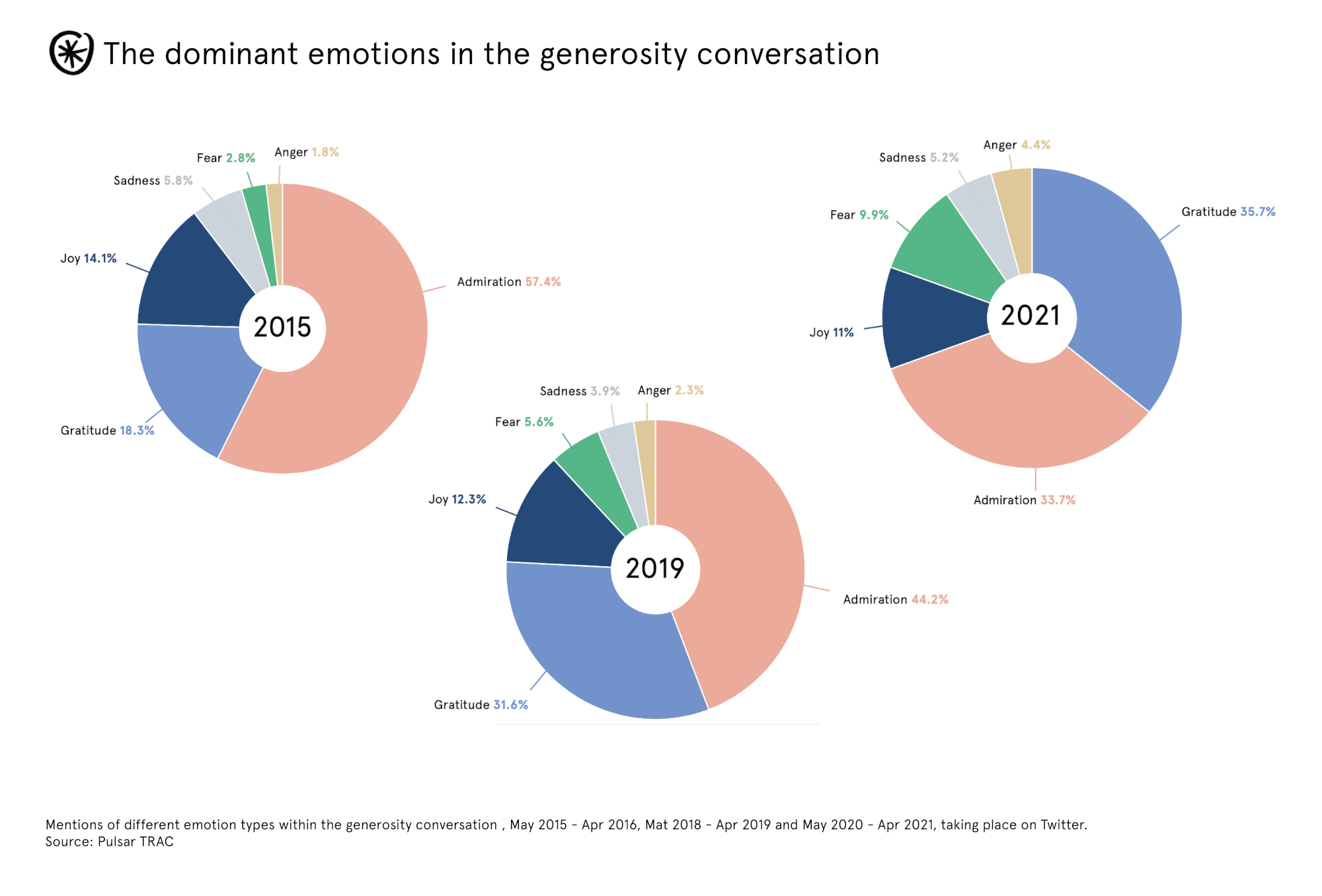 Clearly, Gratitude and Admiration remain the most consistently expressed emotions within the donation conversation at large. The balance between the two has shifted over time, however, a trend that was well-advanced even before the outbreak of Covid-19.

There has also been movement amongst the more viscerally-felt emotions. We see a gradual decline in joyful language, for instance, while fearful and angry language have both sharply increased. For the most part, this remains a conversation that couches often horrific events and situations in hopeful language, but there has nonetheless been a very notable rise in negativity.

This is, perhaps, not surprising, given recent global events. But the very definite rise in the online donation conversation strikes a more hopeful note, indicating a global, durable instinct to help one another.

If you’d like to learn more about how Pulsar can identify long-term behavioral trends, both within the non-profit space and elsewhere, across a spectrum of different data sources, you can request a demo by filling out the form below. 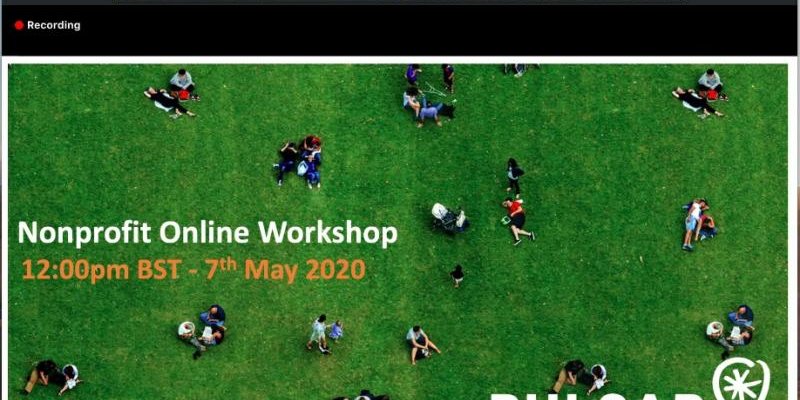 Marketing to a Nonprofit Audience: a Pulsar workshop