An always-on snapshot of how we are feeling, collectively
Written by Sameer Shah

Besides bringing extraordinary challenges and disruptions to our daily routines, this pandemic has forced us all to share in a broad range of emotions, as we seek to regain control over our lives and our futures.

Research has already shown that periods of confinement, loss of routine and reduced social and physical contact with others frequently cause such symptoms as post-traumatic stress, avoidance behaviors and anger, as well as boredom, frustration and a sense of isolation. Even the prospect of lockdown easing brings little relief; fear for one’s financial future has been pinpointed as a risk factor for numerous different psychological disorders.

On an individual level, these stories range from interesting to tragic. But collectively, the billions of emotions felt will be key elements in defining how our societies react to this, as both citizens and consumers. They will directly shape the state of our New Normal.

To understand this in greater detail, we set built a specific public emotions framework for some of our advertising and retail clients, focusing on the US and the UK.

How did we do this?

We might consider the emotional response to the stress of lockdown not too differently to the five stages of grief, moving from anger and sadness to the holy grail of acceptance and dare we say it, even optimism. An emotional journey, in other words.

We selected a broad spectrum of emotions, each with a corresponding opposite, then designed keyword signals to measure the overall emotionality of the online sentiment as it plays out in real-time. 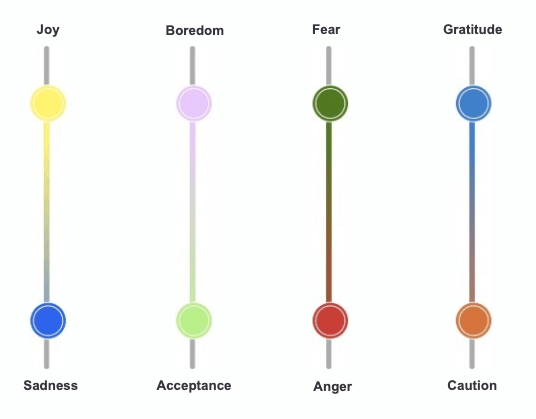 We’ve applied this emotional framework to the UK and the US, using Pulsar TRENDS to evaluate how the Twitter conversation around each emotion has fluctuated since COVID-19 was declared a pandemic.

The timeframe analysed encompasses the “Old Normal” during January and February when coronavirus was not top-of-mind; subsequent outbreaks of the virus; plus the implementation of lockdowns and social distancing guidelines.
Now let’s look more in detail at the UK.

Despite the UK’s first case occurring in late January and first death in early March, the negative emotions of Fear and Caution only started to notably grow after the World Health Organization declared COVID-19 as a global pandemic on 11th March. Both of these emotions peaked a week later, as there remained no government-mandated lockdown period. Some businesses, however, had already begun to close their offices, which gave rise to both Boredom and Acceptance from early adopters of working-from-home.

It was only after plans for furlough, together with the closure of restaurants and pubs, were announced on 20th March that Fear and Caution started to decline, as the public regained a sense of safety around their health and finances.

The announcement of the official lockdown on 23rd March saw Boredom gathering momentum and peaking within a week of people’s routines being dramatically disturbed. Simultaneously, Gratitude also reached its highest point as people expressed thankfulness towards key workers – which was undoubtedly boosted by the #ClapForNHS and similar initiatives to rally around. Elsewhere, incidentally, we’ve seen this feeling of nationhood coalesce around the way we shop.

Now back to the United States. 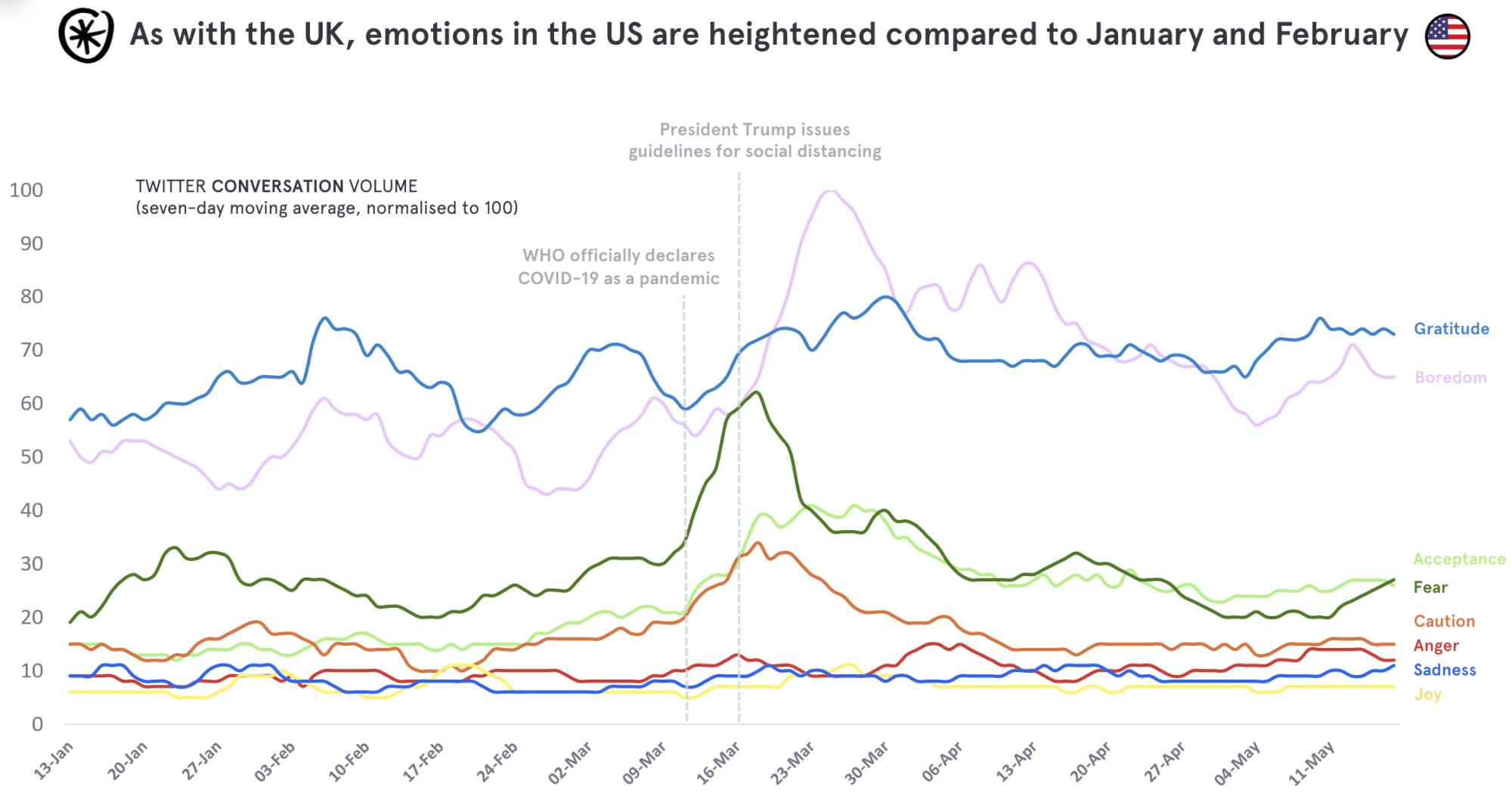 Unlike the UK, Fear in the US initially rose following the emergence of cases (first recorded on 20th January) and deaths (first reported on 29th February).

With government decisions being more decentralised in the US, and no nationwide lockdown officially in force, it is intriguing to see that the later fluctuations of Fear and Caution mirrored the UK almost identically. This speaks to the globalisation of media coverage and the myriad of different news sources available to the public, less tethered than ever before to regionality.

A further commonality between the UK and US? Boredom peaking in both countries within a week of people starting to stay home – offering a lens into human nature around the length of time it takes to adjust to change.

As the pandemic has progressed and lockdowns or social distancing guidelines remain in place, the emotion for which the UK and US has diverged the most is Acceptance. April data within the UK illustrates how this emotion has been on the rise, almost equalling the extent to which people have been expressing their Boredom online.

In contrast, Acceptance in the US declined during April – and this behaviour has manifested in the pockets of protests throughout the country. Indeed, some would attribute this to the different political environments in the countries – with much of President Trump’s rhetoric focused on opening the economy as soon as possible, compared to the UK’s more consistent and cautious #StayHome messaging.

All scientific evidence points towards the vital role a vaccine and immunisation will play in the complete removal of restrictions and a return to business–as–usual. Going forward, in the near future at least, we are all presented with the challenge of living alongside COVID-19.

As consumers, we get the opportunity to rediscover pleasures, previously overlooked; as researchers, meanwhile, we are interested in understanding how we will emotionally cope:

We will be working to help our clients tackle these big questions, sharing our thinking along the way and focusing specifically on what this means for advertisers and retail.

Communities and Solidarity in #newnormal times