Audience interest in Pete Buttigieg is surging after his very strong performance in the Iowa caucuses, inching closer to Bernie Sanders, who continues to drive the largest online conversation volume, according to the latest data from our Primary Index.

Interest in Pete Buttigieg has rapidly increased after his very strong performance in the Iowa caucuses according to the Pulsar Primary Index which analyses social media and online conversations around each candidate.

Buttigieg is now inching closer to Bernie Sanders, who continues to drive the largest online conversation volume of all candidates in the Democratic Primary. 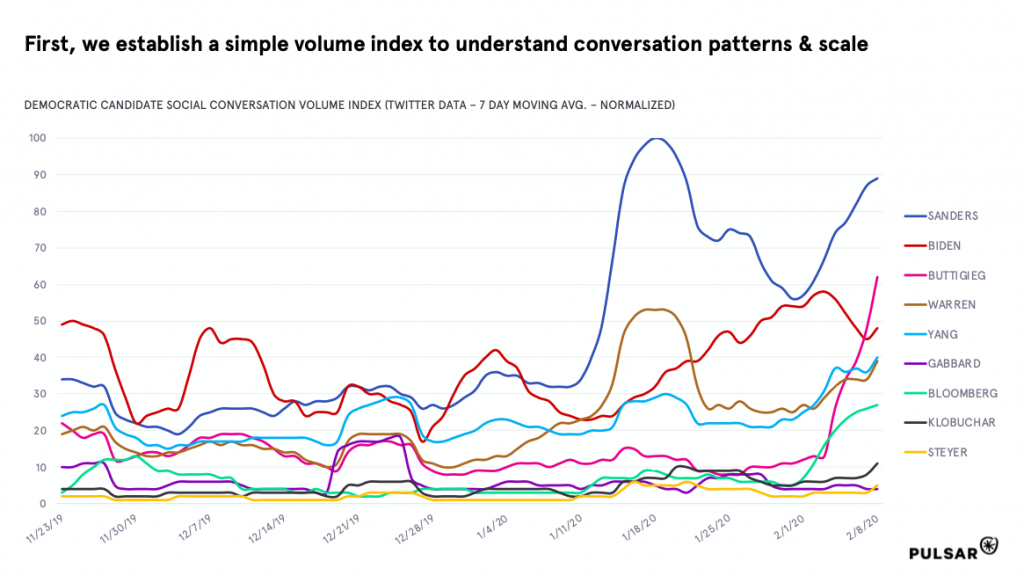 “Audience interest in Buttigieg has skyrocketed after Iowa, and his momentum has continued to grow even after the New Hampshire debate. While Sanders is still the leader of the pack, it’s the first time in our tracking that we’ve seen another candidate generate a higher Velocity of buzz than Bernie – prior to this, no one else had even come close to attracting as many posts per hour” said Marc Geffen, our VP of Research and US Strategy.

“The big swing in momentum for Buttigieg suggests that the Iowa caucuses remain a pivotal moment in the primary process and can shift audience perception in a big way. In the last week, Bloomberg has also experienced a huge bump in conversation following the caucuses, benefitting from mainstream media analysis about his prospects given the debacle in Iowa.”

Over the past week (Feb 2-8th) Sanders continued to drive the largest volume of conversation (more than 1.37M mentions, to Buttigieg’s 0.95M). But interest in Buttigieg has been growing faster, with a week-on-week growth rate of 440%. Conversation about Buttigieg also showed the fastest velocity (a measure of how much conversation each candidate is able to drive within a given hour) of any candidate.

The Pulsar Primary Index also shows that audience interest has grown around Mike Bloomberg after the Iowa Democratic Party’s inability to accurately report results of the caucuses and the consequent chaos and uncertainty about who had actually won. Bloomberg benefited from mainstream media’s analysis about his prospects following the Iowa fiasco seeing a huge week-on-week growth (+290%) in mentions, the second largest after Buttigieg’s.

We will be updating this page with new data as the primaries carry on: you can sign up below with your email to be kept in the loop.

If you are an editor or reporter interested in this data or in the methodology behind it, please reach out to [email protected]