A few bad apples: the vocal, tiny (1%) minority starting most wars on Reddit

Can social media platforms do anything about online conflict and abuse without restricting free speech?

Two new, unrelated accounts published in the past few days studying the weirdest and wildest large social media platform (Reddit) may help us get a bit closer to an answer.

Just how that process plays out on each platform becoming increasingly important. As more and more of people’s private, professional and social life moves online, so do malicious actors aiming to influence, confuse, persuade, disturb and harass.

The result is an in-depth, outstanding article, which you should go ahead and read. But Reddit’s approach to content moderation is well synthesized by this quote by Reddit co-founder & CEO Steven Huffman:

“I don’t think I’m going to leave the office one Friday and go, ‘Mission accomplished—we fixed the Internet.’ Every day, you keep visiting different parts of the site, opening this random door or that random door—‘What’s it like in here? Does this feel like a shitty place to be? No, people are generally having a good time, nobody’s hatching any evil plots, nobody’s crying. O.K., great.’ And you move on to the next room.”

The piece raises more questions than it gives answers, but if we pair it with a recent Stanford study about conflict on Reddit, we can begin to see how Reddit’s strategy might be a promising one.

Nipping conflicts in the bud

The study set out to “examine cases of intercommunity conflict (‘wars’ or ‘raids’), where members of one Reddit community, called “subreddit”, collectively mobilize to participate in or attack another community.”

The study is encouraging because it shows how it is a few small, vocal minorities who tend to start most of the fights online. Here are the main takeaways from the study (full paper here): 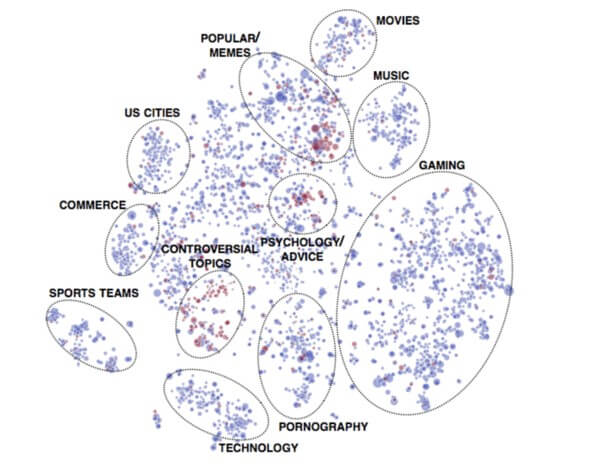 The early-warning system for conflicts

The authors of the study, researchers from the Computer Science & Linguistics department at Stanford, also created a “model to predict whether a link from one community to another is going to lead to conflict,” which “could be used to create a ‘raid’ early-warning system for moderators to inform them of a potential impending influx of toxic users.”

Huffman might consider looking into these techniques, in order to keep Reddit an interesting, humorous place where the mostly-non-belligerent 99% of the communities sometimes come together to create beautiful things.

On April Fools’ day last year, while most tech companies amused themselves with predictable marketing-driven parodies, Reddit set out to create, what Marantz calls “a genuine social experiment”.

“It was called r/Place, and it was a blank square, a thousand pixels by a thousand pixels. In the beginning, all million pixels were white. Once the experiment started, anyone could change a single pixel, anywhere on the grid, to one of sixteen colors. The only restriction was speed: the algorithm allowed each redditor to alter just one pixel every five minutes.”

The result is below (the .GIF is a heavy one, so let it load)

The entire Time Lapse of r/place

Marantz of course yesterday held an AMA –a crowdsourced interview that is one of the trademark formats on Reddit– discussing his article.