The “future of work” is here, but it’s a bit different from what we expected. The Covid-19 pandemic has created the conditions for one of the biggest shifts in how we work in recent history: the changes happening now will reverberate for decades to come.

So crazy that few years ago everyone was talking about how the future of work will be virtual going forward… and now we actually in that future.

We set out to take a deep dive into how people are talking around the future of work, to discover:

Before answering these questions, let’s take a look at how the volume of conversation around future of work topics has grown over time in the US and the UK.

As lockdowns and other measures and regulations were first rolled out in various countries in mid-March, people started thinking about what this meant for their commutes, their colleagues, their daycare, the state of the economy, and the overall viability of their jobs.

It’s interesting to note that while the UK had more stringent (and cohesive) regulation than most of the US, the conversation developed in synch across the Atlantic. As people adjusted to the new normal, interest in the topic settled, but remained well over double pre-pandemic levels, with individual spikes occurring around such business-related news as the unfurling of the UK furlough scheme.

So, as the future of work conversation evolved, which topics came to the fore, and which receded? 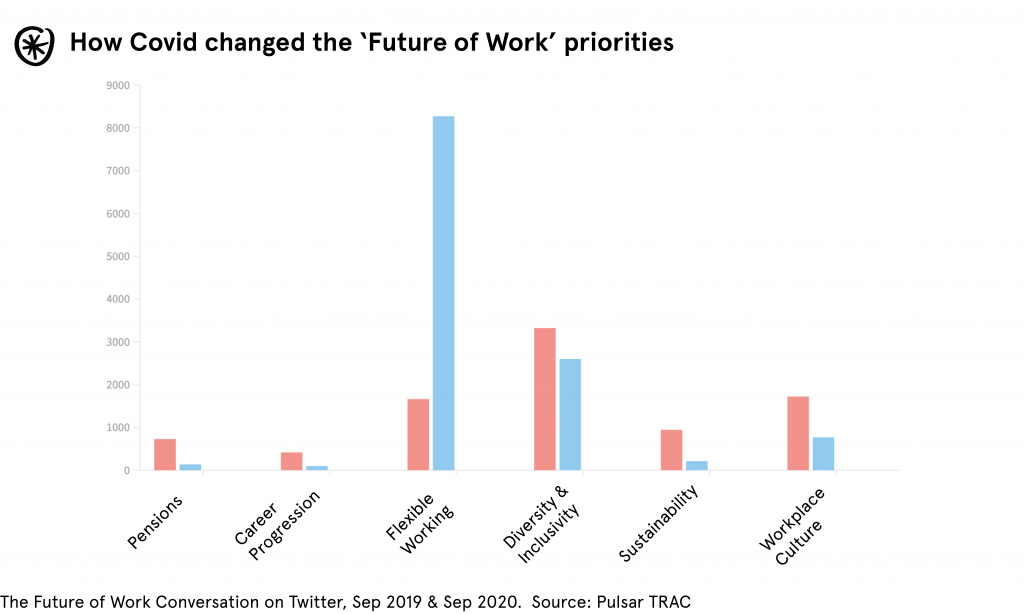 By sampling data from a pre-pandemic September period in 2019, and comparing it to a period a year later, we see a significant shift in focus.

Across the board, every single topic we tracked (flexible working, career progression, sustainability, workplace culture, and pensions) decreased, with two notable exceptions.

Prior to lockdowns coming into effect, ‘future of work’ conversations were most often focused around Diversity & Inclusion, the single largest topic of the bunch. In the wake of BLM and renewed focus on women’s work-life balance, this become the only topic to not cede major ground to Flexible Working.

Nice one @Hachette . As one of your authors I completely approve of equalising parental leave and promoting flexible working. Nice one. https://t.co/mf4EtcDTiP

It remains to be seen whether its continued presence will to relaunch related Sustainability and Workplace Culture back into the reckoning, after a year in which they were forced off centre stage.

How we did this

Different communities talk about the same topic differently. Our feature Communities allows you to segment the audiences behind any public topic of conversation, and a get a demographic and behavior profile for each one.

“WFH” and associated terms, meanwhile, soared to outstrip all other concerns, as the world adapts to onetime peripheral matters like video calls becoming the backdrop and medium for more established issues.

But it’s not just the topics. The communities participating in this conversation also underwent a radical shift. 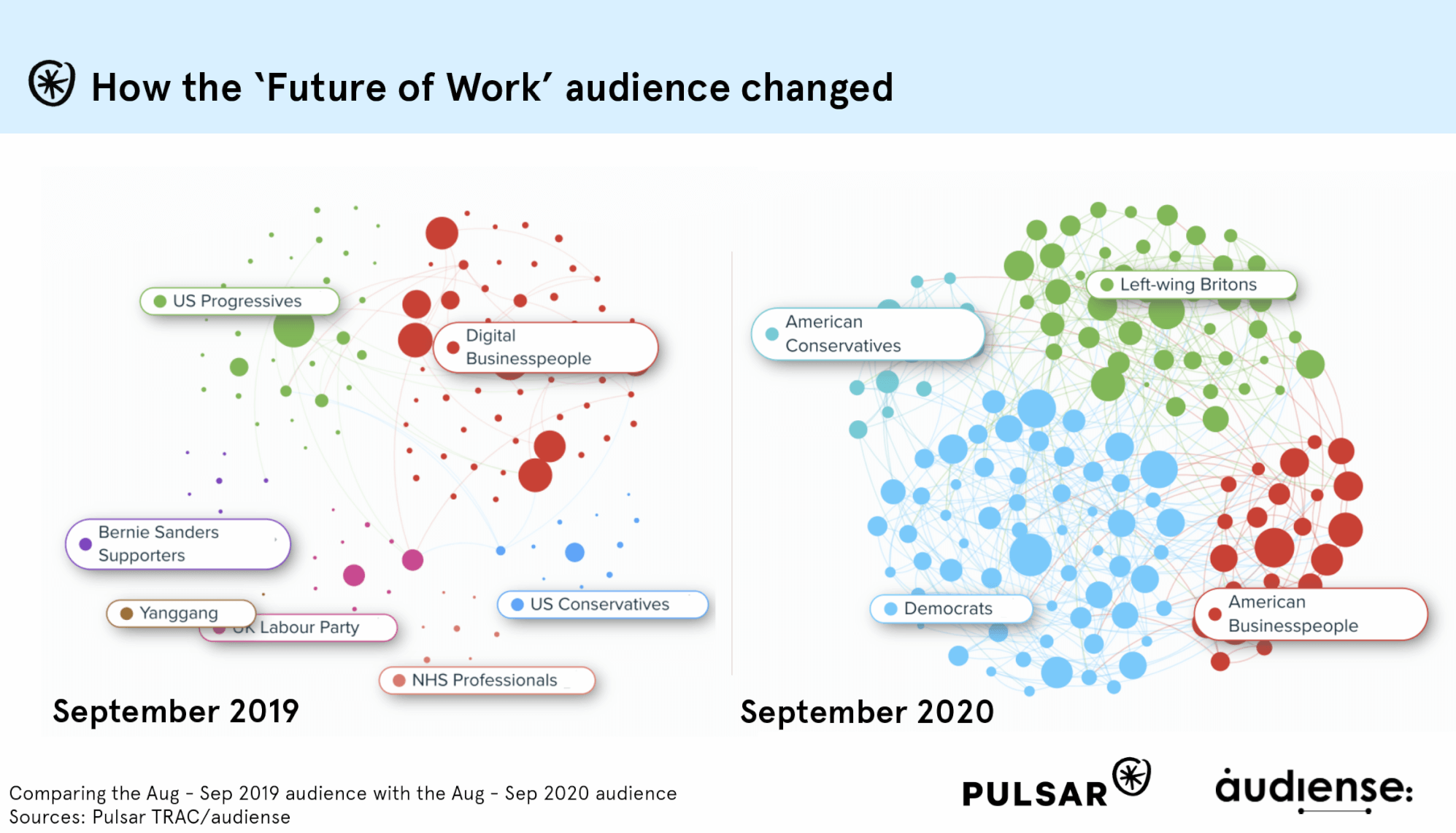 The conversation before Covid was largely dominated by a group we’ve labelled Digital Businesspeople, individuals from fields as diverse as HR and marketing, linked by an interest in technical solutions and innovation.

In the background, meanwhile, the conversation was largely split along political lines. Followers of US Presidential candidates such as Bernie Sanders or Andrew Yang amplified these politicians’ proclamations on subjects such increased automatization, worker benefits and universal basic income.

I hope Andrew Yang will consider running for some office other than president. He has some good big picture ideas about the future of work and what life should look like in the richest country on the planet. Plus we need more fight fans in the government.

In direct contrast to these communities orientated around either professional interest, or specific affinity for single politicians, the latter-day audiences are far broader and more inclusive. In other words, the future of work conversation has massively expanded in participants – bringing into the fold communities which were not too concerned about the topic before experiencing first-hand the seismic changes in the way we work.

Those new members also share more online habits as an overall community, when compared to their more splintered antecedents. This is naturally driven by the pandemic’s enormity, and the ubiquity of shared events, experiences and news sources.

That doesn’t lead to any single coherent viewpoint, of course. Left-wing Britons, for instance, take a scathing view of their government’s response, clustering instead around posts by influential centrist and left-of-centre journalists.

Boris Johnson picks up the reins of government today. His to-do list includes Brexit, Covid, fixing the economy and reshaping the future of work and society. This is like asking Noddy to come up with Einstein’s theory of relativity.

Conservative Americans, on the other hand, are more likely to embrace the narrative advanced by the Republican party.

The future of work that the American Workforce Policy Advisory Board has long been discussing is no longer on the horizon—it is here & now.

Yesterday we learned about exciting, new & innovative platforms the private sector has created to upskill & reskill our Nation’s workforce! pic.twitter.com/5zmUKgKgmf

It’s also revealing to see how these groups differ in terms of political priorities.

Early on in the pandemic, working parents quickly discovered how hard it was to work from home while also taking care of children staying at home for extended periods of time. While smaller than others, this topic intersects Diversity & Inclusion (as working women are often double-duty as primary caregivers) as well as Flexible Work arrangements.

It turns out, the concern for this topic within the ‘future of work’ is not distributed evenly among the participants. 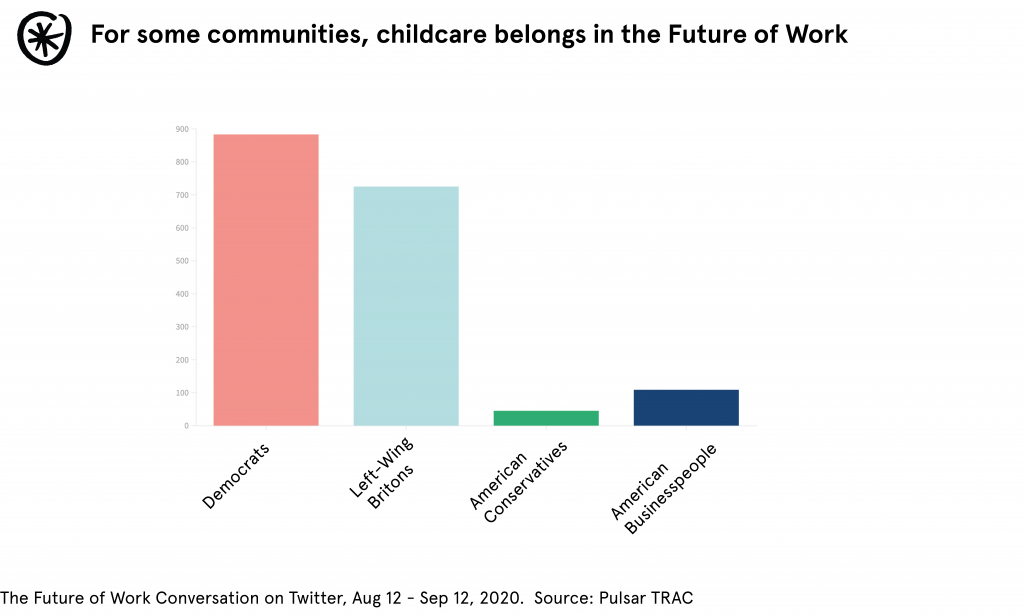 The disparity is striking, and in large part down to the understanding that this new future of work might constitute a regressive one for women, who have had to take up household responsibilities to a disproportionate degree, often at the detriment of their careers.

The future of work is figuring out childcare not slack integrations.

The Consulting firms redesigning the future of work

As ways of working change at an unprecedented scale, companies need to understand how to navigate and implement changes to the way they are working, something we already covered in our analysis of how CIO priorities have shifted. This is an enormous challenge, often involving tens of thousands of employees around the world.

Consulting companies know that, and are ready to equip their clients with the tools, ideas, and processes to help them navigate this stretch: this is reflected in their marketing, communications and thought leadership, which since the beginning of the pandemic has been focused on becoming authoritative voices on these topics in uncertain times.

We tracked mentions of 15 leading consultancies, aggregating their share of voice across the two periods studied to discover which had the highest share of voice online, and which, therefore, had achieved the greatest degree of influence. 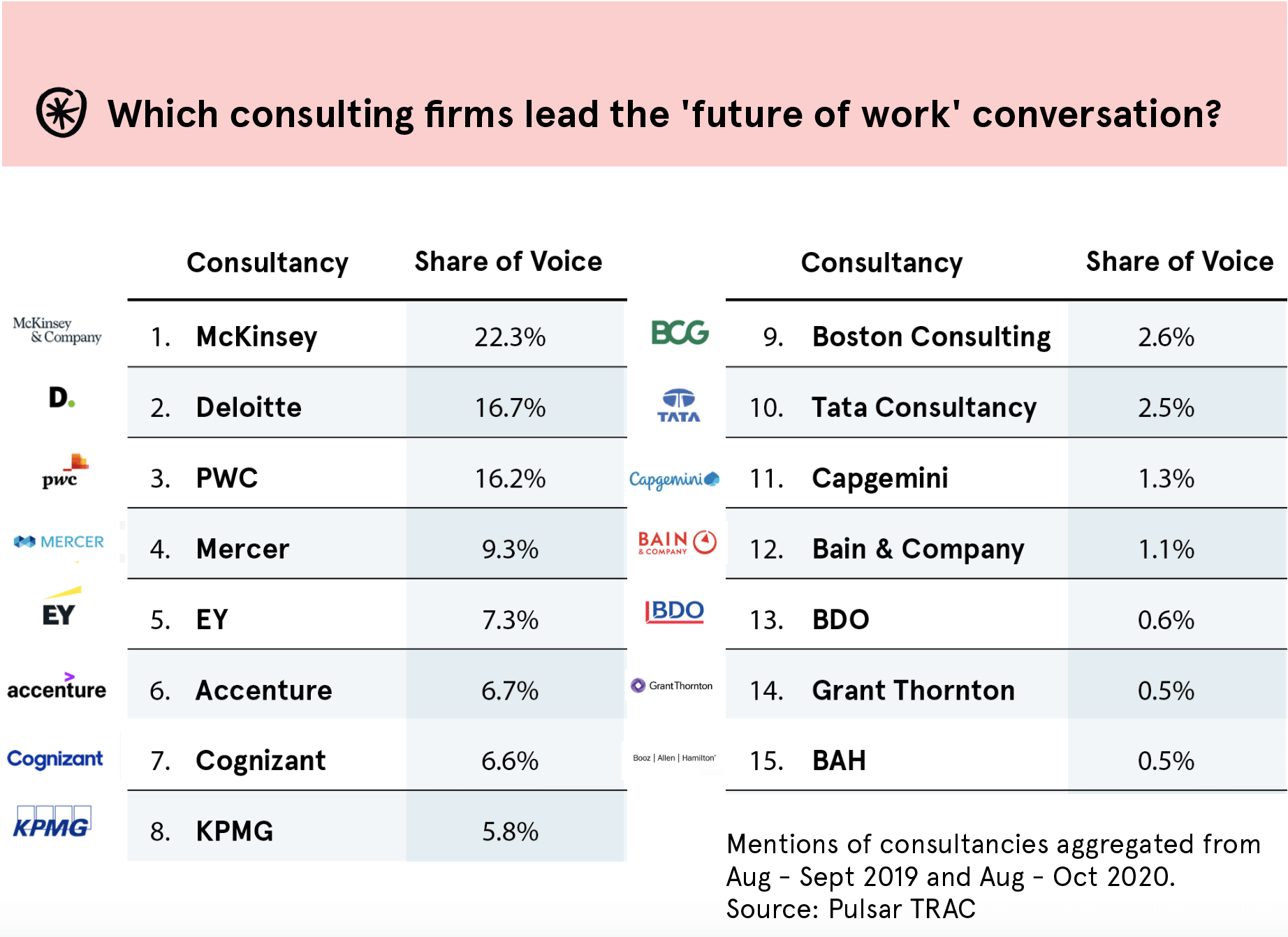 Our analysis shows that the vast majority of the conversation is driven by a limited number of companies.

While KPMG and EY have struggled to capitalize on their global image in online presence, Mercer, has clocked in 9.2% total share of voice, outperforming in relation to size and market share.

There are two reasons for this, the first being the relatively prosaic reality that, as a human resources consulting firm, Mercer simpler engages with ‘the future of work’ more regularly.

In addition to this, though, Mercer was able to source original, fresh data related to pandemic challenges from an HR perspective, which traveled far in the news and on social media.

PWC, meanwhile, was able to ascribe its own relatively high standing to the publicizing of its own internal efforts to become an inclusive, ‘anti-racist’ space.

That the movement towards greater inclusivity remains a key factor within future of work conversations implies a certain staying power ― and the prospect of significant change not only in the working practices of global offices, but in the individuals who carry out that work.

To find out how audience intelligence might help your brand, you can book a demo with one of our specialists here.

Can we see burnout online?

What’s the world saying about the economy?