We ran 1M #fashionweek posts through an apparel AI

There’s a lot of data in a fashion week.

In each of the four cities hosting the main fashion weeks, there are over 100 shows, each showing about 30-40 outfits. That adds up to roughly 16,000 official looks, resulting in up to 45,000 official images, seen by over 100,000 attendees. And that’s just for one season.

To spot trends among this deluge of information, newspapers and magazines employ expert sets of human eyes: fashion critics, whose brains and eyes have been trained on decades of shows, from the front seats of the runway.

But as soon as these fresh ideas hit the runway in New York, London, Milan or Paris, they begin to spread much further online, spawning even more data: the biggest audience for fashion week is on Instagram, with 709 million posts, stories, likes and comments generated by 143 million people over the September 2017 fashion month alone.

How do those trends spread from the catwalk through the rest of the fashion audience online and to the street? Do they even?

We combined the crowdsourced data from #fashionweek posts with the all-seeing eye of artificial intelligence, to find out how the fashion audience has begun to make sense of the trends it saw on the runway as inspiration for their own outfits and social media posts.

Here’s what we found:

Here’s how we did it.

What the critics saw

The expert human eye (Vogue) declared the following to be the Spring/Summer ‘19 trends:

These trends are more or less consistent across several publications (although they’re often given different names by different outlets), giving us a good indicator of what the critics’ eyes spotted. But did the crowd see the same thing?

The method: #fashionblogger vs #streetstyle

We applied vertical AI modules, powered by Clarifai, to analyze 1.09 million images from Instagram and Twitter using the #fashionweek hashtag, collected via Pulsar TRAC over the month of September 2018 – when fashion week shows take place in New York, London, Milan and Paris.

Within the set of #fashionweek posts, we zoomed in on two subsets: those including the #fashionblogger hashtag: 423,000 image posts in total, and those which used #streetstyle, 192,000.

#fashionblogger, which was used by 34% of the #fashionweek audience, denotes the personal perspective of an account aiming to become a publisher or brand, along the footsteps of Leandra Medine of Man Repeller, Susie Lau of Style Bubble and Chiara Ferragni of The Blonde Salad.

I loved Marc Jacobs tonight so much. This is unilateral luxury! Dressing to appease the gaze of no one but your own mirror’s! It’s private, but also joyful in the way it serves as a game of dress up. This wearing of clothes that serve no utilitarian purpose out of your own home. I imagine throwing a party on a set of paper plates (because I don’t have dishes but do have ruffles!) just to wear them. It’s harmless hedonism. Suspension of reality. The sum of youthful imagination occupying the crevices an exposed mind. I love it so much.

Common hashtags used alongside #fashionblogger include #style, #fashionable, and #beautiful – showing they’re focused on looking good and using ideas from the runway to stay ahead of the trends.

Posts using #streetstyle made up 15% of the total #fashionweek posts: the hashtag aggregates what ‘real’ people supposedly wear. During fashion week, streetstyle diaries – capturing looks from people attending the shows – have become as much a part of the tradition as the looks from the shows themselves and the attempts to pick up how fashion permeates into society.

They focus more on the entire look and feel of what someone is wearing – hashtags used alongside it include #outfitoftheday, #outfit and #vintage.

Cross-referencing a few of the trends Vogue spoke about with our dataset, we found that (perhaps unsurprisingly) cycling shorts were not on anybody’s radar yet – with fewer than 100 mentions across the month, and not showing up on our Vertical AI analysis at all. 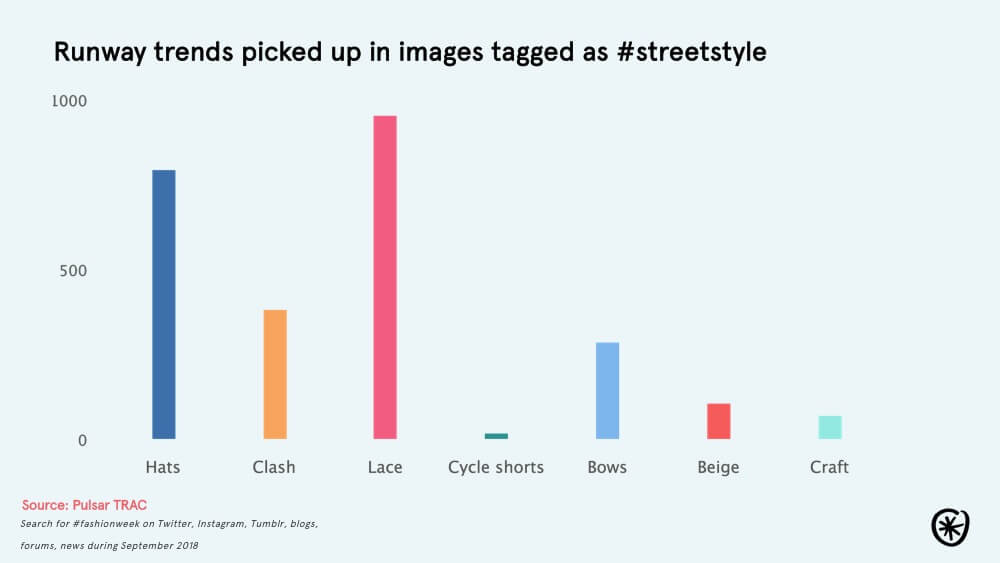 The ‘print clash’ trend was mentioned sparsely amongst those who tagged their posts #streetstyle, but we found that people using #fashionblogger were much more keen on taking inspiration from the catwalk on this front: looking at the apparel items singled out in print clash posts by #fashionbloggers, using the Clarifai AI, we found that ‘bottoms’ (trousers and skirts) were the most frequently used statement piece for this print clash, rather than ‘tops’.

Similarly, lace was much more utilized by the #fashionblogger set, often a key part of an outfit, used on cocktail and other formal dresses. When used alongside #streetstyle, the AI module found that lace was featured mostly on tops alone. 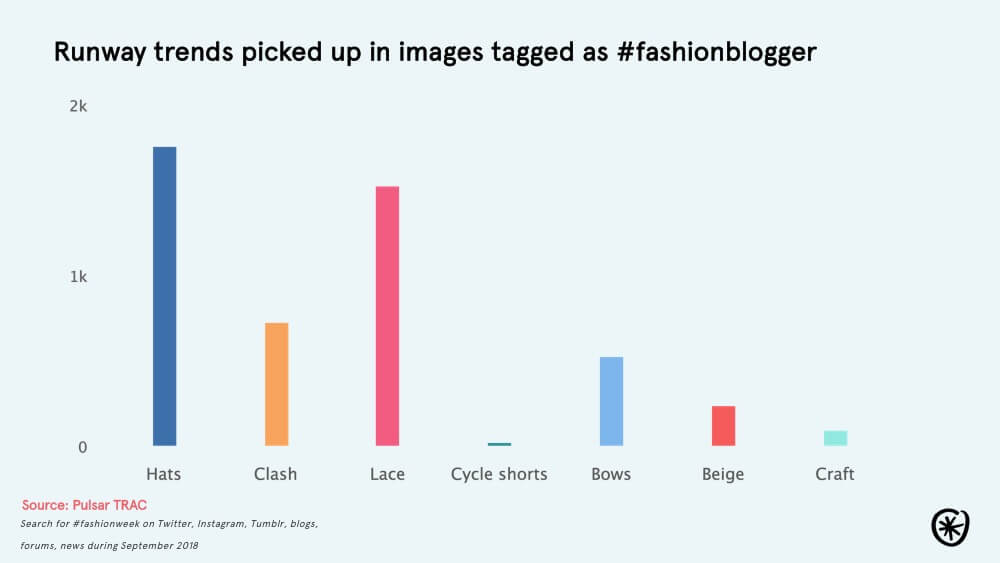 As far as hats went, there were more (56% more to be precise) mentions of hats amongst the fashion blogger crowd, although street style posts riffed on them more freely, often matching them with more casual outfits like T-shirts and hoodies.

We’re still months away from anything resembling Spring/Summer, but the fashion world has been ready for months – and the crowd’s eye is training its eye on some of these trends, deciding which ones from the catwalk will find their way to the streets.

Politics are in fashion: how lifestyle brands navigate the risky mix of advertising and politics