Mercury is going into retrograde on July 26 – and you know what that means. The memes will be endless.

Mercury retrograde, if you’re not in the know, is an astronomical phenomenon that –astrology fans would have us believe – causes disruption in communication, from people to bumbling sentences, to phones and computers breaking.

The phenomenon happens around three times a year and generally lasts three weeks – at which point we can see social media going into overdrive with people blaming it for everything from awkward social moments to genuine disasters.

The expression has spread from the tighter-knit groups of astrology fans to a broader community of social network users who use it as an ironic scapegoat for life’s annoyances and disappointments, connecting communities that wouldn’t have otherwise been interlinked.

Mentions of the term spike each time Mercury retrograde occurs, as we can see in the past year:

We looked into trends, behaviors and conversations around Mercury retrograde, and here’s what we’ve found:

The astrology community has been growing online amongst millennial and teen groups.
Looking on Pulsar TRAC and Audiense, 87% of the audience who mentioned Mercury retrograde on Twitter during the period April – July 2018 were under 34. Using segmentation technology, we found distinctive sub-groups within the audience. 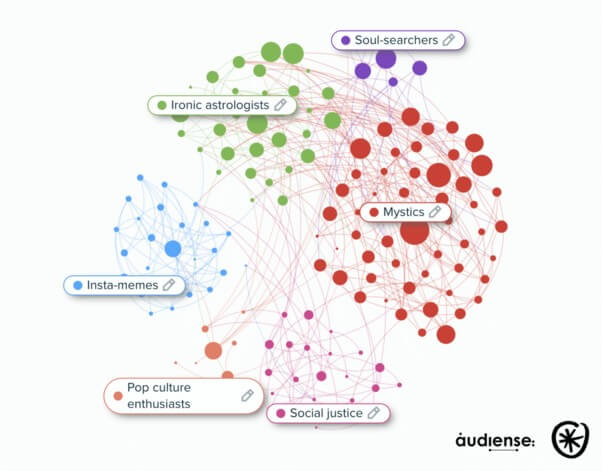 The largest sub-group, the ‘mystics’, are also interested in tarot readings, witchcraft and reiki – showing the “woo woo” side of astrology, people looking for alternative belief systems. This is an interesting contrast with the ‘social justice’ segment, who use bio keywords like “feminist” “queer” and “#blacklivesmatter” and might be looking to astrology as one shade of their political disillusionment. Both of these audiences also have a level of crossover with the ‘ironic astrologists’, who use memes and snowclones to communicate with their audiences. A fourth community operates in a similar way but with more emphasis on Instagram and Facebook memes than Twitter.

Mercury retrograders like to mention their age in their bios, with most of them declaring an age between 19 and 30. They also, unsurprisingly, tend to mention their star sign and their Myers-Briggs personality type in their Twitter bios.

Different groups also gather around various influencers – including the ironic account @poetastrologers which writes short poems about the individual star signs as well as tweeting out memes, as well as slightly more ‘serious’ accounts like @happycapricorn, a working astrologer, whose account offers advice on how to apply astrological readings to situations like work and dating.

Astrology influencers connect otherwise unrelated sets of communities. The influencers we identified from our search appeal to different groups, from humor and full out irony, to fashion, using astrology as a common denominator. Interestingly, there was no overwhelmingly dominant star sign amongst people discussing Mercury retrograde – of those who stated their star sign in their bio. 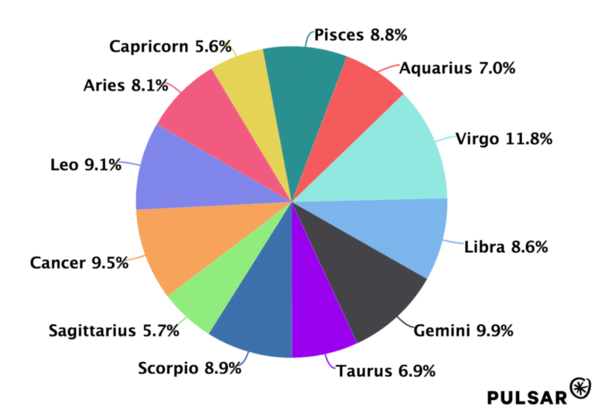 Astro-memes are the new star signs

Easily translate-able occurrences like Mercury retrograde are easy to turn into memes or for people to relate to their own lives. One of the biggest memes we saw shared was the idea that Beyonce had ended Mercury retrograde in April with her awe-inspiring Coachella performance: two universally popular ideas meeting.

Despite a lot of research and ‘proof’ to the contrary, astrology continues to be popular – and has translated itself online thanks to the ability to deep dive and share via memes.

Below are some of the keywords discussed alongside Mercury retrograde, where we can see a lot of skepticism still abounds with the usage of “supposedly” and “perhaps”. 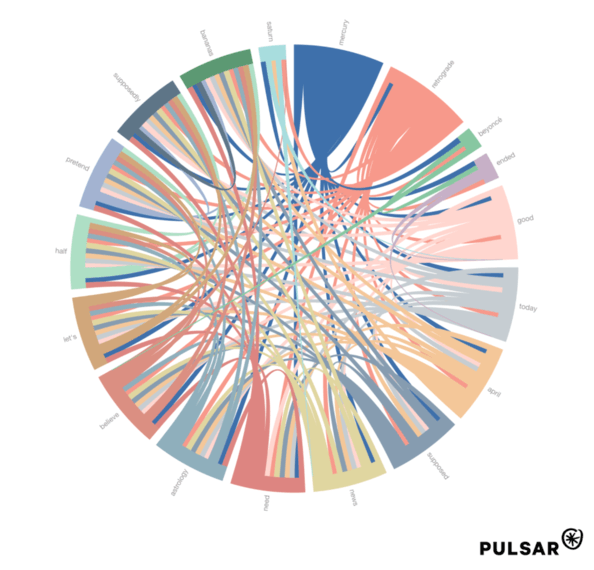 Why are people drawn to astrology online?

The answer may live in Tumblr, which is home to some of the most active and dedicated astrology communities.

From a deep dive into the world of teen astrologists on Tumblr: “what is new to the astrology scene is the ability to organize its concepts on vast, searchable social networks of both amateur and experienced enthusiasts. The teen astrologists … said that Tumblr’s horoscope-obsessed community began to form around 2011 or so, and was bolstered by a tagging system that made it particularly easy to discover in-depth posts on niche topics.”

Zing Tsjeng, UK editor of the site Broadly, whose astrology section is extremely popular, argues that astrology may offer a way to cope with uncertainty:

“My personal belief is that people tend to turn to mysticism, spirituality and the occult in uncertain times, and I feel that young people, especially, are living in one of the most uncertain times ever, at least in my living memory. There’s an increasing willingness to question the arranged order, break out of pre-defined social norms and look for answers elsewhere.”

In the face of a rising backlash against round-the-clock updates, data sharing and social media itself, there’s a refreshing level of commitment to caring about astrology, it requires diving deep.

Using your star sign as shorthand for your personality, and discussing how phenomena like Mercury retrograde affects your day-to-day life, allows people to express themselves via a sidestep, just in the way memes do. This might be why the two meet so easily.

From an excellent piece by Pulsar research director Jay Owens on why memes matter: “The format acts as a kind of Trojan Horse, then, for sharing difficult feelings — because the format pre-primes the audience to respond in a hospitable mode. There isn’t that moment of feeling stuck about how to respond to your friend’s big emotional disclosure, because she hasn’t made the big statement quite directly, but through irony and cultural quotation.”

So whatever your beliefs in astrology, it might be worth paying attention to what happens during Mercury retrograde.