Who’s talking about Podcast Adverts? We listened to the listeners

How effective are podcasts at communicating brand awareness?

As podcasts exert ever greater influence on culture, advertisers are alive to the possibilities of reaching recurrent, and highly immersed, listeners.

These shows combine the portability of social media with the kind of deep, continuous relationships that were once formed with beloved television or radio personalities. Over the course of lockdowns, many even reported podcasts acting as a substitute for interactions with friends and family.

The intimacy of that relationship with the host and their guests is often broken up by podcasts ads – brief (or not so brief!) readouts of food delivery offers, new media releases and a myriad of business-focused tools & services.

And of course that’s getting people talking.

Quite aside from the familiarity and trust listeners establish with their favorite hosts, listeners often sort themselves organically into communities with shared, sometimes niche, affinities, simply by downloading the show in the first place.

As such, the opportunities for brands are many. But how do listeners react to hearing adverts within these aural spaces? Does this approach appear to work, or do users react against a perceived invasion?

Using Pulsar TRAC, we analyzed the conversation around adverts within podcasts from Jan 1, 2022 to March 23, 2022 – bringing in all mentions as they occurred across Twitter, Blogs, Forums and Review Sites. In addition, we also looked at the relevant conversation on a selection of podcast-specific subreddits, which tend to incorporate users who are especially invested in popular podcasts (such as r/podsaveamerica or r/myfavoritemurder) or else the medium itself (r/podcasts).

This allowed us to map how audiences reacted to these adverts placed within podcasts:

Conversation on Reddit is generally more negatively inclined, where an increased level of engagement can reflect in posters demanding higher standards of production. It follows that these individuals, who rank amongst the most dedicated fans of each podcast, also clock up hours of listening which can accentuate the idea of ‘too many’ or ‘annoying’ ads.

A number of different words and phrases have become entrenched in the wider lexicon, most notably ‘host-read’, together with others familiar from other forms of advertising, such as ‘programmatic’ and ‘pre-roll’, which are four times more likely to occur in the more specialized Reddit platform.

We can also see how often different platforms are discussed in conjunction with podcasts & ads, a mode of analysis we previously applied to the AirPod conversation (in which podcasts were the second most cited medium behind music).

Spotify and Apple are, unsurprisingly, the platforms most often cited in the advertising conversation.

The former’s acquisitions within the space are reflected in the platform overtaking Apple’s podcast application in the wider conversation. This has also led to a certain amount of blowback, however, with users questioning the business’ model relative to its competitors.

A not so gentle reminder if you are a fan of podcasts:

– Stats on virtually any other platform just… don't matter. Spotify & Apple are the big guys in the room

Perhaps the single most famous – and important – advert within the space took place in Serial ‘s 2014 run. Playing with the pronunciation of email marketing tool MailChimp (Mail… Keemp?), the ad was not only listened to by millions of people, but also spawned its own memes and in-jokes.

Today, the most-cited advertisers run the spectrum from e-commerce to counseling services. 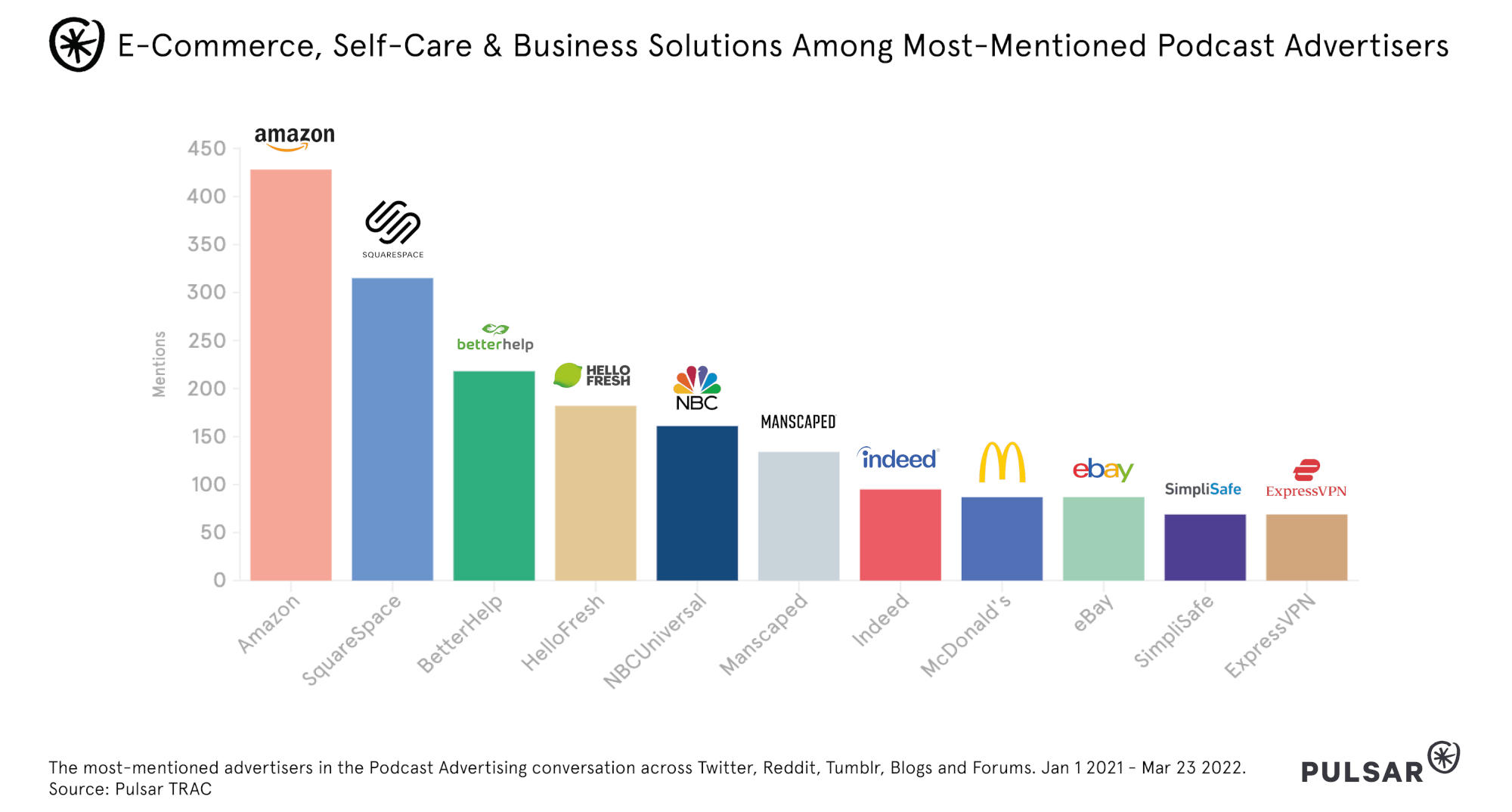 In SquareSpace, Indeed and ExpressVPN, meanwhile, we see the continued presence of business solutions long after the notorious Mailchimp ad. Clearly, advertisers view podcasts on subjects such as technology, business and politics as a prime opportunity for targeting professionals and company decision makers.

Amazon’s high mentions are partially attributable to its sponsorship of My Favorite Murder.

Amazon buying the rights to the popular true crime podcast "My Favorite Murder." Amazon lining up a few of these network deals, where it controls ad inventory & uses the 1-wk window to entice more people to make Amazon Music their main podcasting app
https://t.co/e4R0wlhmlV

This has encountered some spirited responses, with the company’s sponsorship of Fan Cult Membership provoking defensiveness amongst groups who tie their membership of the fandom to bonds made over the pandemic. Elsewhere, however, Amazon are frequently written about by industry insiders as the prospective ‘Netflix of podcasts’, thanks to rapid expansion in the space that includes the acquisition of Wondery and its 8 million monthly listeners.

Elsewhere we see brands mentioned as a source of ubiquitous ads:

Me listening to my 12th BetterHelp podcast ad of the day https://t.co/9hES39Ihxw

… as well as sponsors of shows facing boycotts, such as The Joe Rogan Experience.

Of course, if advertisers can negotiate the complications that arise from dedicated fandoms and wider cultural movements, the benefits to appearing on the right podcast can be enormous.

By way of example, we can look at the Twitter followers of HelloFresh, the most recalled brand in podcasting, and My Favorite Murder, the show that played host to its most recent advertising campaign.

Each of the rounded pale circles indicates an audience segment in which ‘Mom’ is the word most frequently used in bio descriptions. This chimes with HelloFresh’s own disclosure that its customer base is largely between 30-50 years old – and 80% women. Through targeted influencer campaigns, including paid Instagram posts from the likes of Mandy Moore, the brand have looked to increase awareness amongst this societal segment.

Naturally ‘Moms’ are not a monolith, and we see other commonalities between the two audiences in terms of affinity and behavior. In addition to being largely female, each of the two audiences shares an affinity for prominent Democrat politicians, as well as influencers like Chrissy Teigen.

The two accounts share a little over 320 followers, and so advertising on My Favorite Murder provides HelloFresh with a great opportunity to reach the same profile of person who is already engaged enough with their brand to follow their owned account.

And, tracking mentions of the two brands, there is evidence that the partnership is prompting the desired kinds of purchase behavior.

lol I only went with HelloFresh because i kept hearing the My Favorite Murder ads and I was too lazy to see what other meal kits existed. I hope your cooking joy comes back!

Understanding the individual segments, meanwhile, adds an extra level of nuance. We can see, for instance, that Euphoria is a topic of discussion amongst every segment within The My Favorite Murder following, while Celebrity Big Brother is of interest to distinct communities like Irreverent Nerd Moms.

As new research commissioned by The Guardian suggests podcasts command the highest levels of attention of any media channel, it’s likely that advertisers will only become more sophisticated in their advertising efforts.

If you’re interested in learning more about how Pulsar can help your brand understand audiences and emerging trends, simply fill out the form below.