The latest on how we're feeling, collectively
Written by Alex Bryson

2020 has been a year of unprecedented, awful numbers. For the population at large, however, life is not played out in the pages of an account book, but in a succession of powerful, individual emotions.

And, since we last indexed public emotions across the US and UK, the world has faltered in its recovery, begun to feel the crisis’ full economic implications, and seen mass scale protest in the wake of George Floyd’s death.

That’s why we’ve continued to update Pulsar’s Public Emotions Framework, which mapped the emotional states of Americans and Britons as they fluctuate across the coronavirus pandemic. By tracking the occurrence of key semantic signifiers across social media, the team were able to paint a comprehensive picture of the nations’ shifting moods, and provide a model for different analyses.

So we’ve revisited the numbers, to gauge once again the emotional response of the two nations.

The US has seen consistently high levels of emotional flux, with fear and fatigue in particular proving especially volatile. In fact, the leap in fear following the death of George Floyd signified the single greatest change in any value over the course of the study. In the space of two weeks, the normalised score leapt over 70% upwards, before returning to pre-existing levels.

This can partly be attributed to the nature of the protests in the US, which saw significantly more civic unrest, and casualties, than those within the UK.

Since the protests, emotions have remained relatively unstable, showing more week-to-week irregularity than they did in the early stages of the pandemic. The US’s difficulties in arresting the tide of COVID-19, coupled with the creep of November’s Presidential election, appear strong contributing factors.

As a larger, more diverse country, we can expect a certain degree of increased instability when comparing the US to the UK. But the volatility of July US relative to the US of three months ago suggests a country struggling to provide satisfactory answers to the questions in finance, governance and social justice that 2020 brought to the surface. 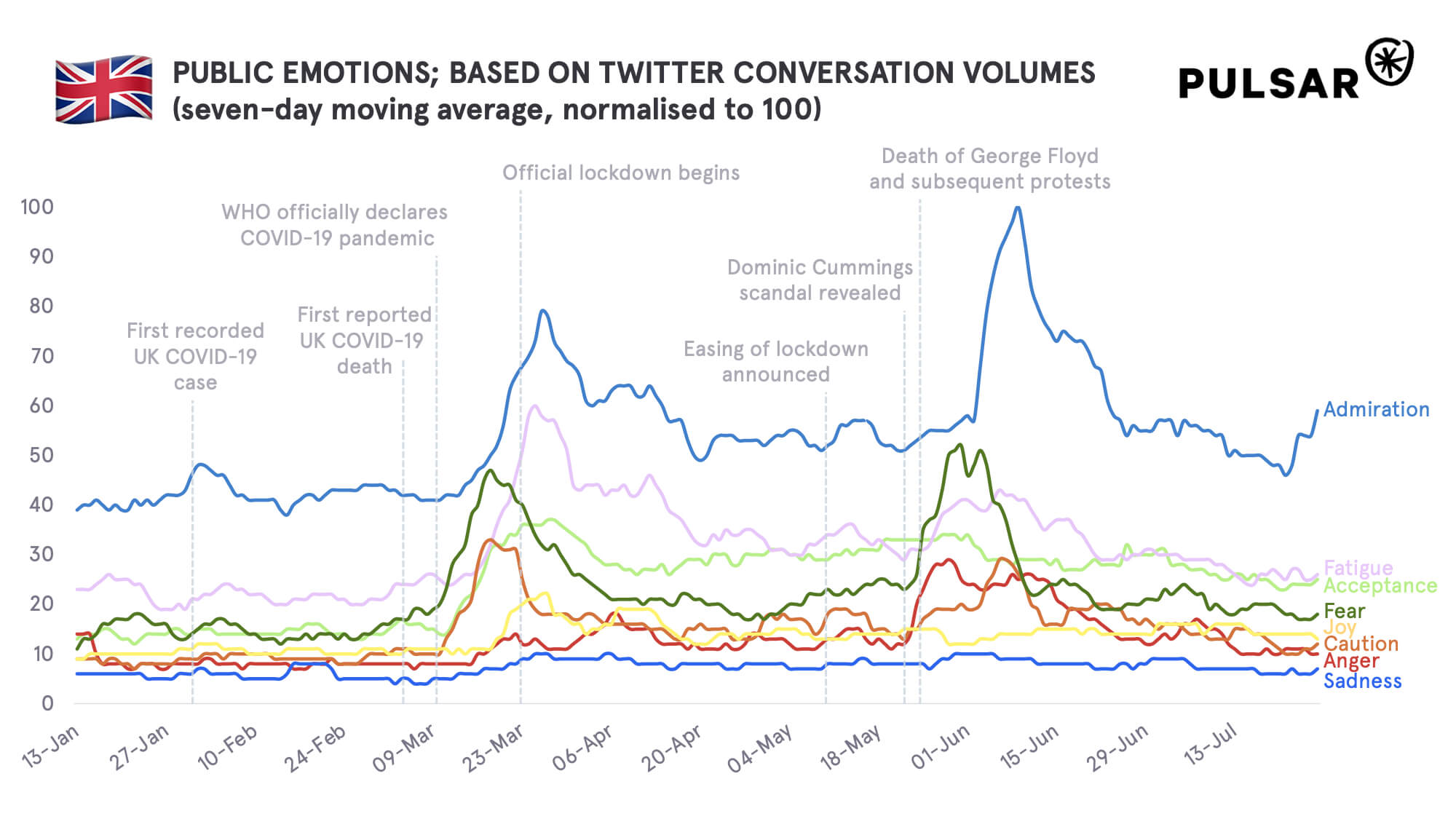 From mid-April onwards, emotions within the UK ran high but relatively stable. This changed with the death of George Floyd and subsequent protests.

A spike in anger was almost immediately followed by an upswing in fear, before coordinated and individual responses saw a massive increase in admiration, to peaks that exceeded even late March, when the country was unified in its support of the NHS.

Fatigue and caution were also slightly elevated, as questions arose around methods of protest and the impact of proposed new initiatives.

In keeping with the UK response to coronavirus, however, these spikes were relatively short-lived, with emotions returning to a relatively stable state by July. The exception here is admiration, which can be explained in part by the higher volumes involved, which contribute to volatility, but also to the return of the sports seasons, and the victories of Liverpool, Leeds and the english cricket team.

We’ll continue to monitor the emotions of the UK and US, as well as the trends and behavioural responses these provoke, which you can track on our New Normal page.

Brexit’s Disappearance from the News Cycle

What’s the world saying about the economy?