In recent years, many industries have come under pressure to be more inclusive, just as the increasing polarization of American and European politics has taken over many social and web conversations.

The gaming and movie industries are no exception, and we looked at two mainstream releases to see how the conversations about inclusivity impacted the success of two large franchise: the Star Wars Last Jedi movie in late 2017, and the video game Battlefield 5, a first-person shooter game set in WWII, which was released in 2018.

Both of these releases faced substantial backlash because of ‘unexpected’ female presence in their narrative: that of a female Jedi in Star Wars, and that of female WWII fighters in BFV. One franchise however, came out unscathed (and possibly stronger) from the backlash, while the other faced a substantial slowdown in sales.

We tried to answer why that was the case, by analyzing the structure of the audience (which our research has found to be an important factor).

But first, a bit of background.

Star Wars: The Last Jedi (from now on, SW), a highly anticipated sequel to the Star Wars saga, garnered a substantial negative reaction for its assumed pushing of a feminist or political agenda, by deciding to cast a female as its main character. The very large audience interested in the film also took issue with the plot, jokes and brushings of legacy characters, as well as a more ‘modern’ adaption of the story.

The film was released on December 14, 2017 and there were two major spikes in negative conversation, on the 15 and 18 of December that year. The first spike shows “the right’s” response to the presence of a female character and its perception of the quality of the film, followed by a positive spike, where the ‘left’ enter the conversation. 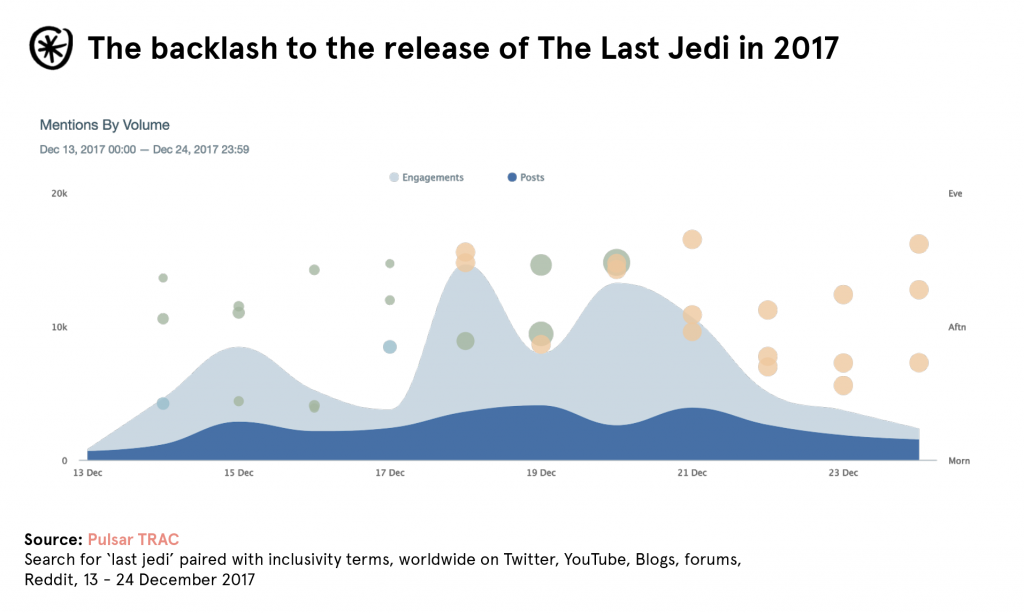 Part of the response of the right died out after the 18th because of the creation of an online petition, “Have Disney strike Star Wars Episode VIII from the official canon.” With 116,925 supporters, this petition moved a good chunk of the conversation off of social media and onto a new platform.

Battlefield 5 (BFV from now on) is the 16th installment of a very successful franchise by Electronic Arts (EA), one of the largest video game companies in the world.

In May 2018 EA released a trailer featuring women soldiers in a WWII game, receiving a similar backlash. This precipitated when the Chief Creative Officer of EA , the game publishers, gave the dissenting & on-the-fence fans an ultimatum, “accept it, or don’t buy it.”

In late May and early June, 6% of the total conversation about the game was about this topic.

The result? Unlike Star Wars, BFV’s sales figures substantially, underperformed by about 1 million units, even after EA dropped the price of the game by half two weeks after release. EA CEO Andrew Wilson did not mention the controversy as a cause of low sales.

The BFV backlash follows a similar pattern to Star Wars, with discussion about it starting off on forums and Twitter on the 24th of May (when the trailer was released) and then dropping off the next day on those platforms. 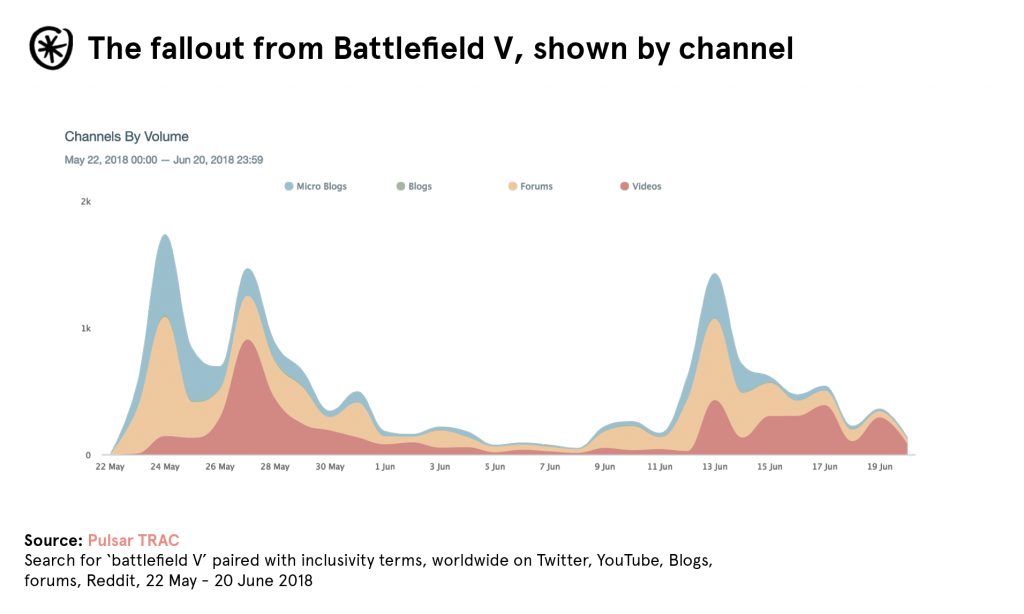 But just a few days later, by the 27th, engagement spiked again on Youtube. Between the 24th-26th original content was being posted on Youtube at a constant level between 45-46 videos per day. By the 27th the number of comments massively spiked and tailed off by the 31st.

A petition was created but currently sits at around 3,000 signatories and the conversation certainly did not leave social media because of it, unlike with Star Wars. It picked up once again on the 13th of June after an EA executive made the comments “either accept it or don’t buy the game.”

Though there was no major spike in original content being produced on Youtube at that time, there is a huge spike in comments, which were not particularly positive.

A polarized conversation, on the left & on the right

Both of these controversies were immersed in a very polarized political conversation where #Resist and #MAGA have become shorthands for political affiliation and often help easily determine which side of a controversy a group will side on.

The following analysis seeks to analyze the structure and development of these conversations along the broad lines of “left” and “right” which will be used to define the two groups on the polar ends of the discussion, whom we identified through a digital audience segmentation.

Using Twitter audience data, we identified the make-up of left and right in this discussion as:

Right: Right-Wing Gamers and Conservatives. With only 3.78% of these Twitter conversations, and 3.29k unique users.

First, we will look at the networks, structures and conversations of the left vs right. Secondly, we will analyze the structure of the immediate response to the controversy, and finally a brief note on how those in the centre engage with these kind of conversations. Scaling out both sides provided a similar amount of content given their relative sizes.

What is most important to immediately note in this is that the polar extremes of the left and right have little to no engagement with one another.

Here is the makeup of the Star Wars: The Last Jedi audience 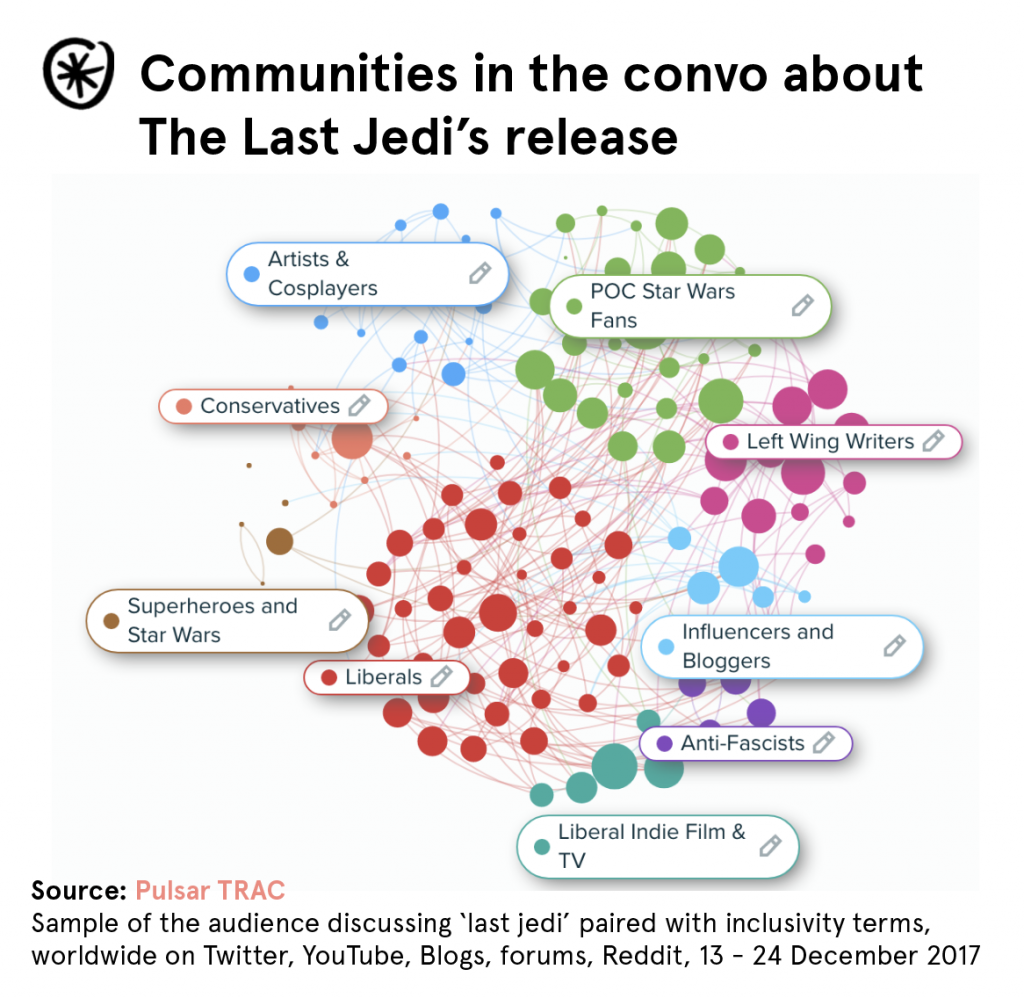 And here is the audience for Battlefield 5: 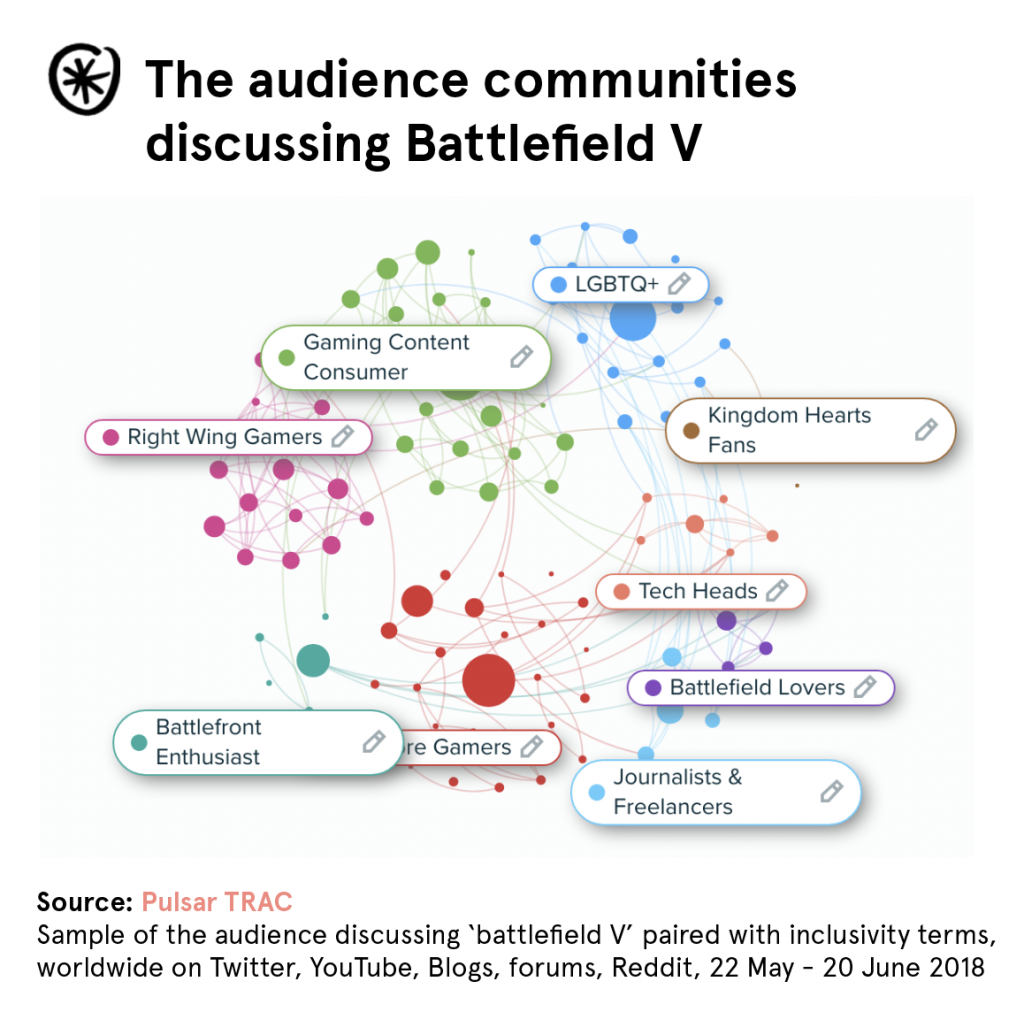 Both groups engage with the opposing arguments through 3rd parties, either a news source or an individual tweets, usually over-simplifying it for humor and then dissecting it within their isolated community. What this leads to is a proliferation of many multiple “truths” in each community, which are infrequently or never challenged and then accepted as facts.

Star Wars guy is still trying to convince me that Last Jedi is terrible and sexist against men and that he can’t understand why any feminist would like it because if we want true equality then film needs to portray men in a positive light. Okay, dude.

The key difference between the left & right communities in the SW and BFV conversations was the structure of their response in terms of posts vs. engagement:

What this graph shows is that the left side of the conversation is far more engagement-led. The community is more agreeable and supportive of one another, sharing and engaging positively with one other’s opinions.

The right on the other hand, is considerably more post-led. Essentially is shows how the left congregates around “party-line” opinions whereas the right provides their own opinions, though these are generally similar to one another. Interestingly, this behavior maps to ideas present in the traditional left/right divide, such as collectivist (left) and individual (right). This is an important point going forward in understanding how either side react and the structure of their reaction.

Looking at the top content across both the controversies, the general sense is that this is left-leaning or matter-of-fact reporting of the events through Youtube, precisely for the reasons described above, since the left comes together in an engagement-led conversation.

Did these two controversies overlap?

We decided to study these two controversies because they were close in time (less than a year apart) and both had to do with an ‘unexpected’ female presence in the game/movie. This gives us a unique opportunity to analyze the cross-fertilization of communities within the discussions and answer whether the BFV right or left wing were also talking about the Star Wars controversy, and vice-versa. The answer: no.

The Star Wars left made up 0.06% of the total conversation in the BFV discussion, and their right made up the same, with only 20 less posts. Whereas the BFV left created 0.02% of the Star Wars conversation and the right 0.07%. Essentially statistically irrelevant. Being either pro or anti-female Jedi in Star Wars has little to no bearing as to whether you would care to engage with BFV’s discussion about women in WWII.

The “Center” conversation for Battlefield V

The BFV conversation had a large centre audience. Made up by people with a love of gaming. This centre group (labelled in red in the graph below) is made up of communities identified as: Hardcore Gamers, Gaming Content Consumers, Tech Heads, Battlefield Lovers and Battlefront Enthusiasts (Battlefront is a Star Wars version of Battlefield, also made by EA).

This group exhibits similar tendencies to how the general audience engaged with top-content, however they do have room for some counter points too.

EA employee telling us if we don’t like women in BF5, don’t buy it.. but didn’t tell their daughter “if u don’t wanna be a man, don’t play it”? interesting 🤔.. regardless EA STILL thinks it’s about sexism. Yikes.. https://t.co/YKxn8BDtQ2

Hardcore Gamers are fairly well connected to the Right-Wing Gamer audiences. While the LGBTQ+ group, despite including an Engagement Editor of Polygon, a gaming news site, in the community, are not at all connected to the wider gaming community, though they are in a spatially central position. 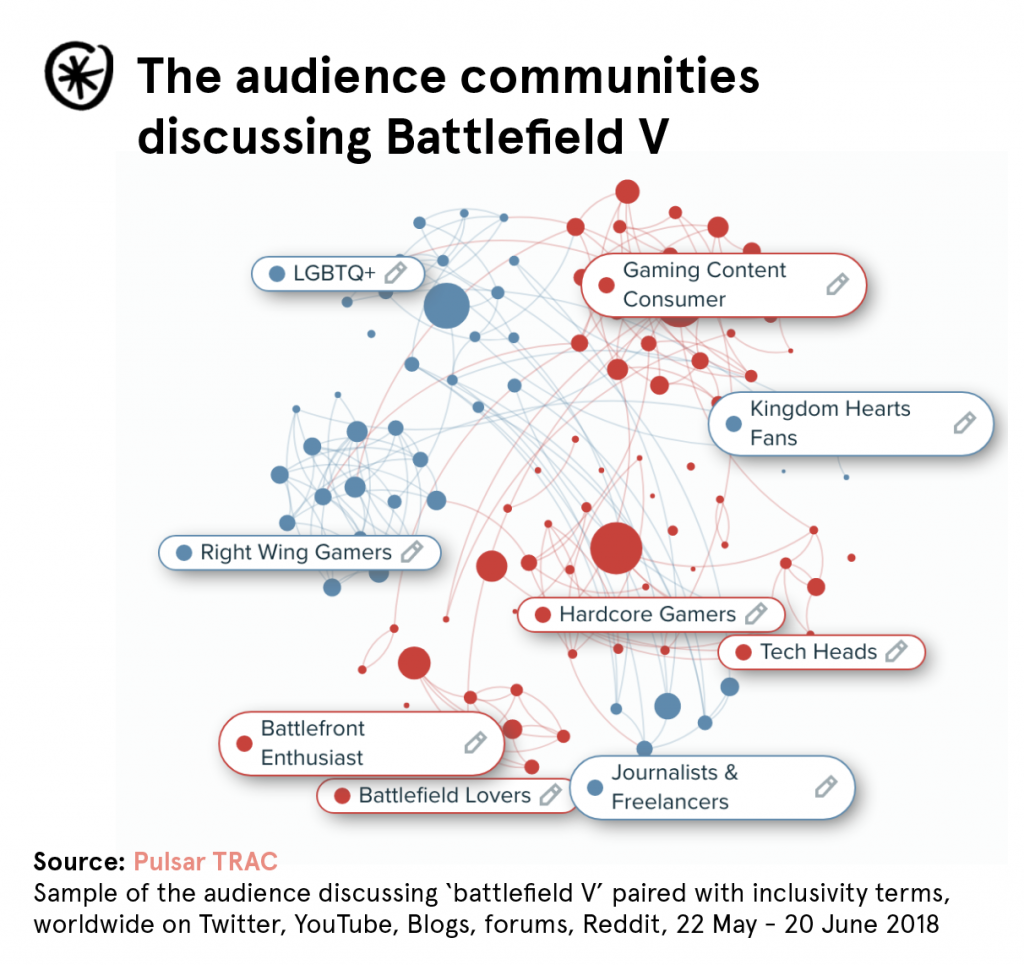 The center group’s response to the Battlefield trailer was relatively smaller than the general response, but 20 days later there was a huge spike in engagement, triggered by the “don’t buy it” comment – with a 198.73% post to engagement rate at the peak.  The top performing content is all different people sharing articles regarding the comments.

While this center was not particularly polarized on the original discussion, a newsworthy comment like this one helps the build an opinion about it. In this case, it seems like the “don’t buy it” comment became the focal point of the conversation – hardly ideal for EA.

What does this mean for release strategy?