How politics took over the DNA test conversation

Direct-to-consumer DNA testing kits have become increasingly popular over the past 5 years, and the conversation around them has grown substantially.

But the nature of that conversation has undergone a large-scale mutation, going from a science and benefit-oriented one in 2014, to a highly politicized one today, ensnared in identity politics and concerns about privacy.

The online conversation about direct-to-consumer (DTC) DNA kits has grown 6-fold since 2014 (we looked at it worldwide, but 88% of it took place in the US and UK).

Five years ago, it was dominated by the scientific development of this technology (36%), as well as by people interested in discovering their heritage (33.3%), and insights about their genetic predisposition to certain kinds of conditions (14.7%). 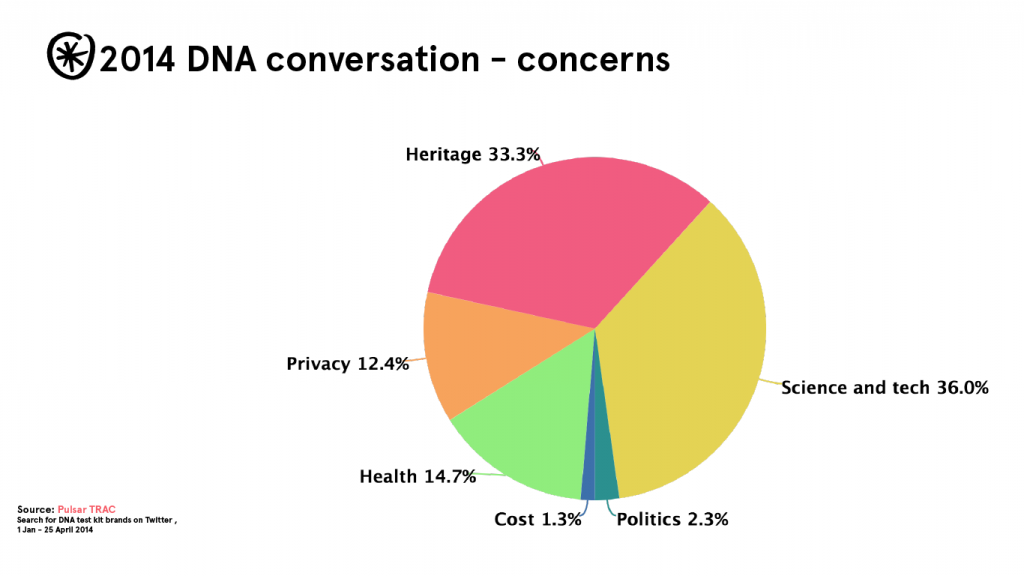 Besides the DTC DNA kit brand names (23andme, ancestry.com), many other heritage-based keywords popped up: country, people, research, blog, family, tree, record. Flashes of ‘health’ ‘data’ and ‘Anne Wojcicki’ (the founder of 23andme) were discussed too.

At first glance, the DNA kit conversation today does not look too different.

For instance, 31% (compared to 33% in 2014) of recent posts also mentioned heritage, and the health segment has grown by a few percentage points (from 14.7 to 18.2%), while the politics and privacy segments grew roughly 10% each, eating into the share of science/tech conversation. 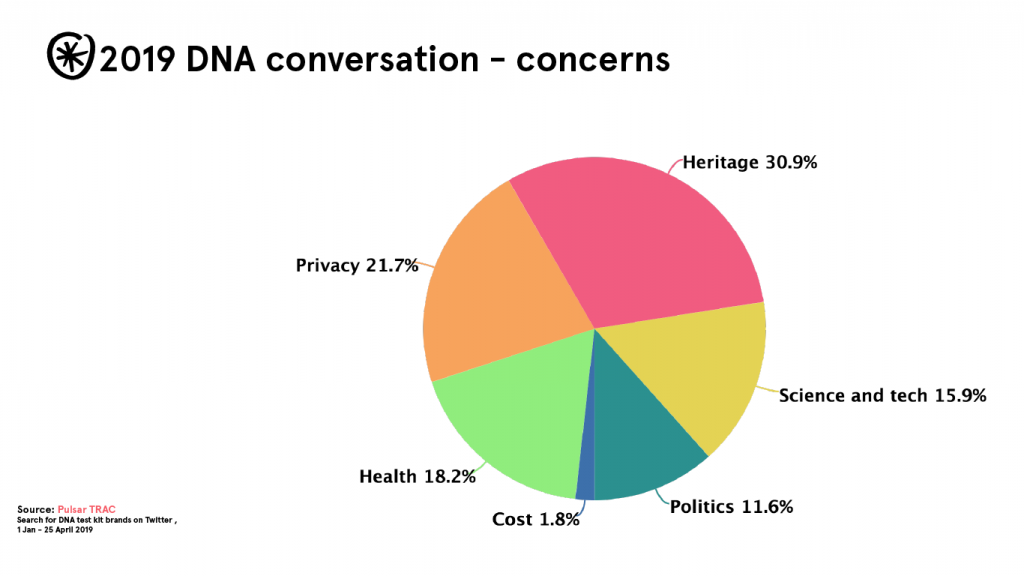 But while on the surface the conversation may look somewhat similar, it is in fact very different.

We uncovered these differences –which would have not been evident by running a simple social listening and historics query– by using our newest feature, Communities: this is an integration we developed with our partners at Audiense that allows you to match the results of your conversation analysis tool with the segments of the audience that make up that conversation, and then use those audience segments to filter the conversation.

Thanks to this tool, we were able to see how over the past 5 years, the heritage conversation has for the most part merged with the broader, extremely polarized political one.

Topics within this conversation range from Democratic presidential candidate Elizabeth Warren’s heritage (she has claimed Native American heritage, discovered through a DNA test, to much controversy), to the history of slavery and poorly thought-out advertising campaigns.

We were also able to see how different communities express their identity concerns in different ways: let’s take jokes, for instance, something that both the socialist and the comedy fans communities take part in. Socialists crack political identity jokes using DNA as the butt of the joke….

…while comedy fans joke about their own identity and status in the world.

Or let’s take K-pop fans, one of the smallest communities in this conversation, who seem to have a very politically engaged view of the US government’s involvement in DNA. conversation, seen through the lens of their favourite bands, of course:

yoongi, bodily dragging bts away from 23andme: don't you fucking dare let the US government get your DNA https://t.co/L8mpvHFYTU

It turns out, they care about this mostly because of threats to the band BTS, rather than because of the risk to their own security or privacy, as some other members of the political conversation. (BTS do also have a song called DNA).

Understanding how the various strands (sorry) of conversation (the “concerns” in the graphs above) map to the communities that participate in the conversation (see below) allows us to understand at both the global and granular level the texture of this complex conversation.

Today, the DNA conversation happening on Twitter is made up of 9 main communities divided into 3 larger interest areas: science, privacy, and identity. 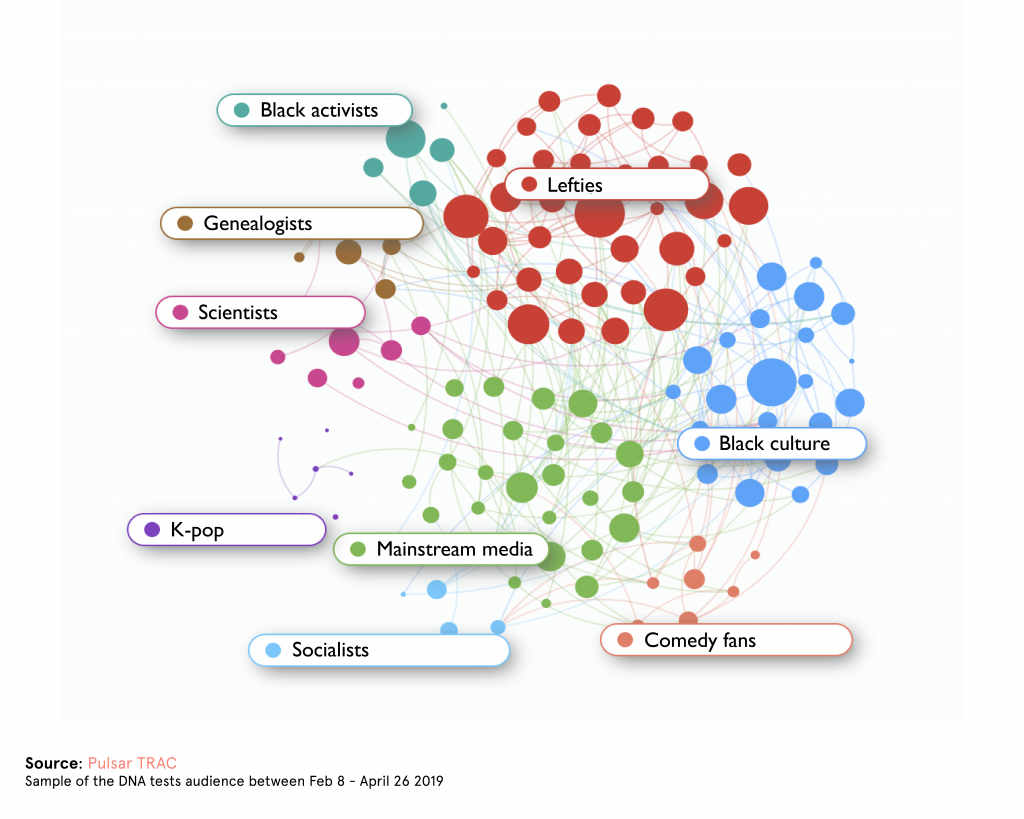 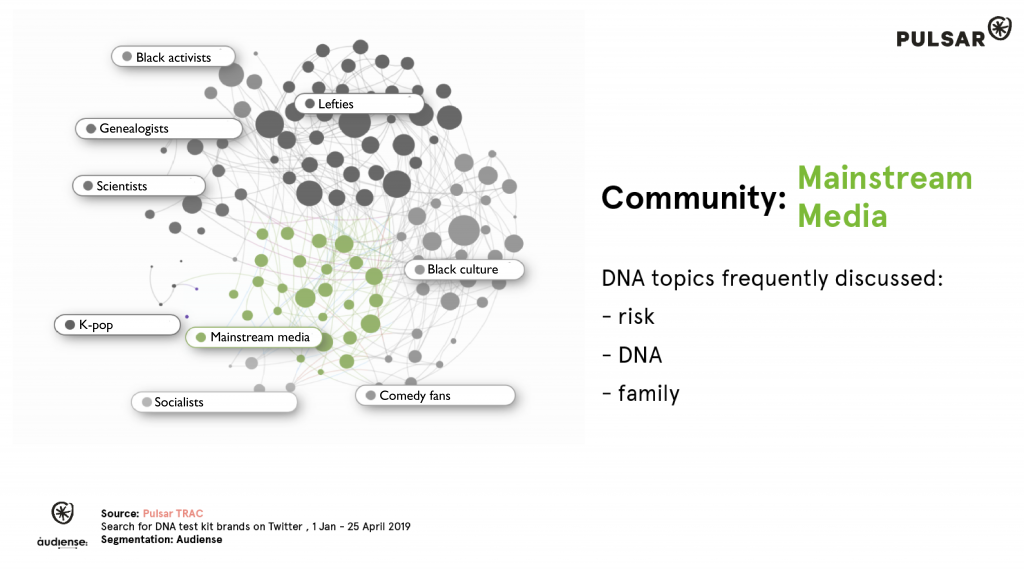 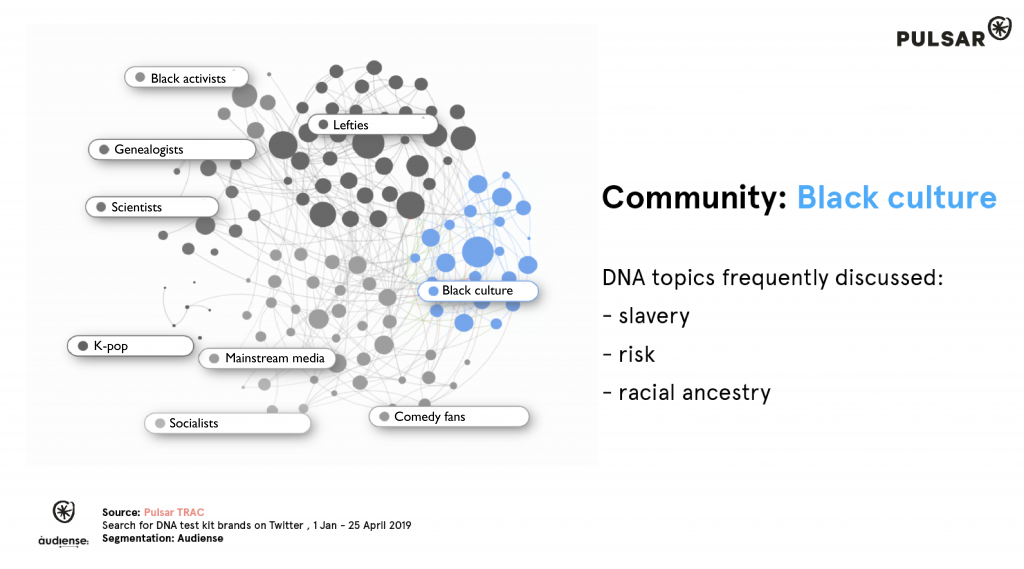 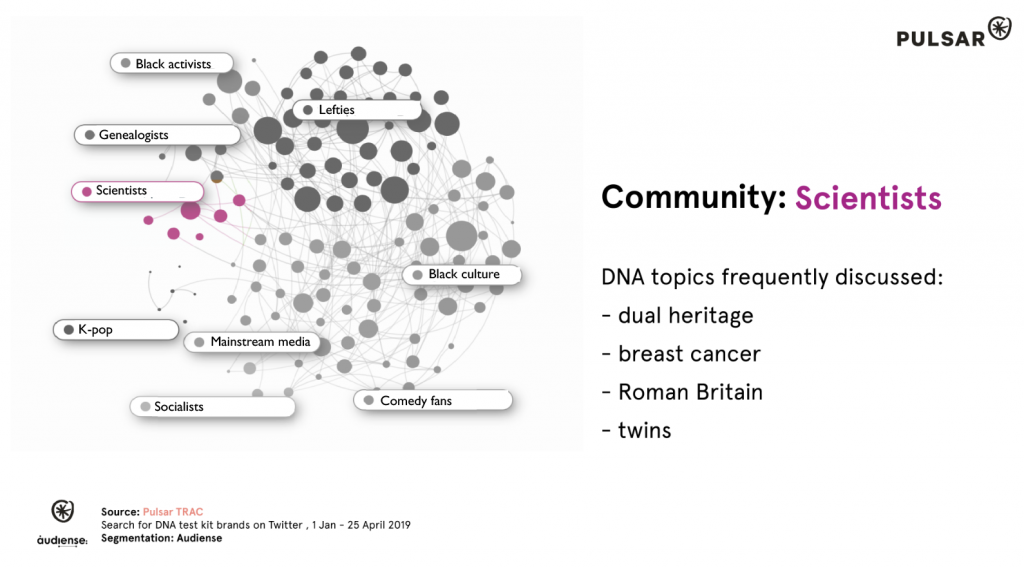 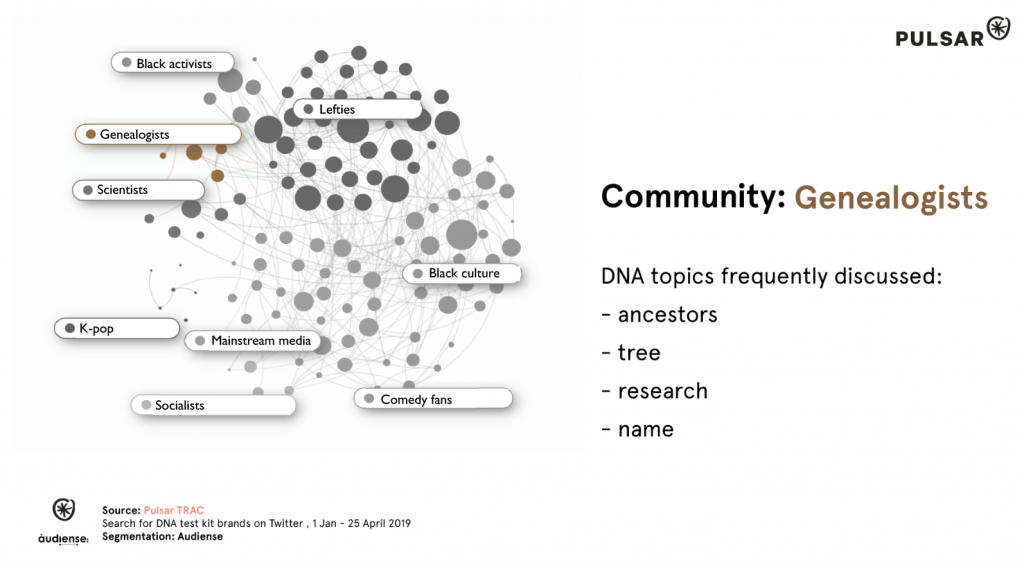 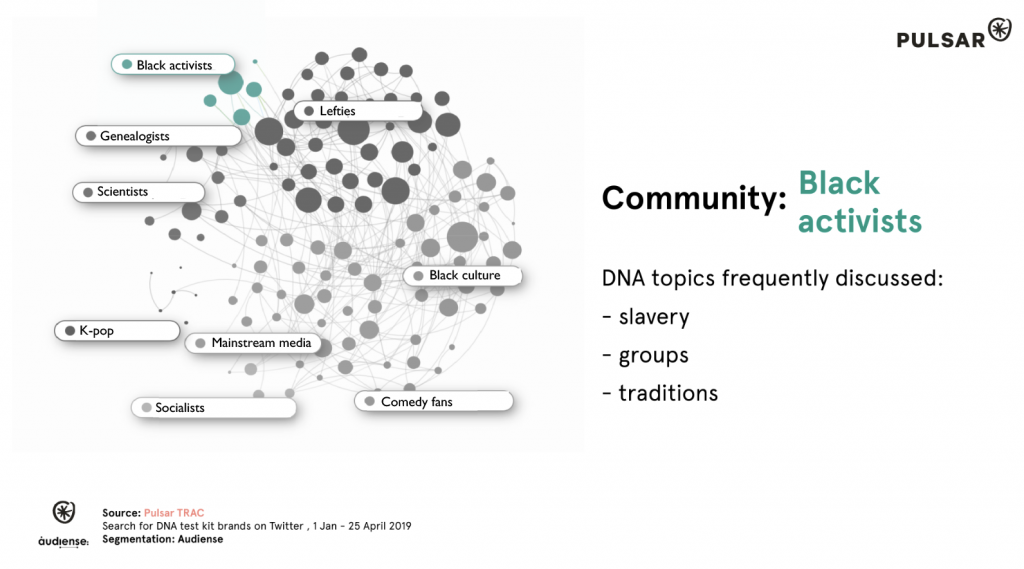 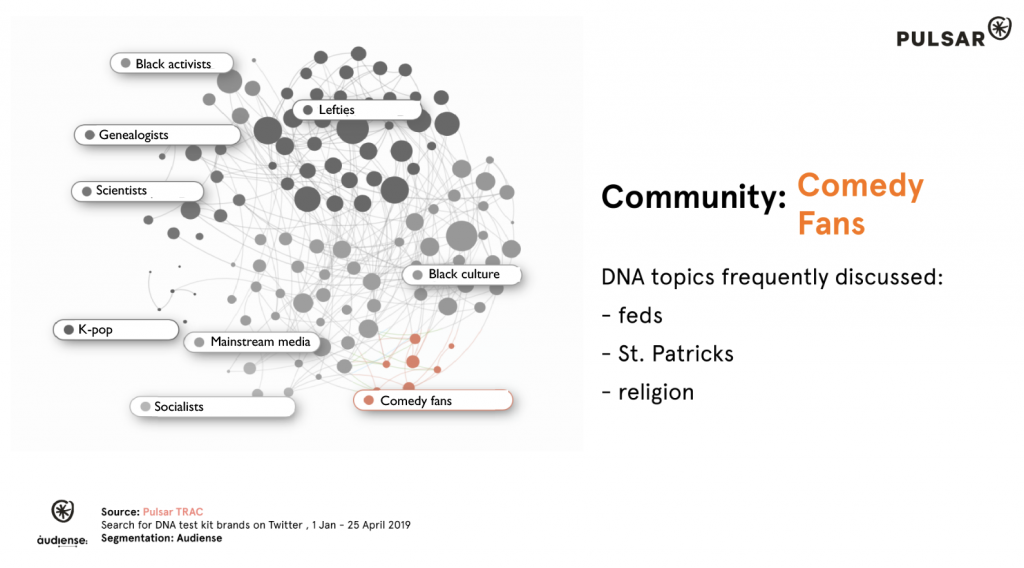 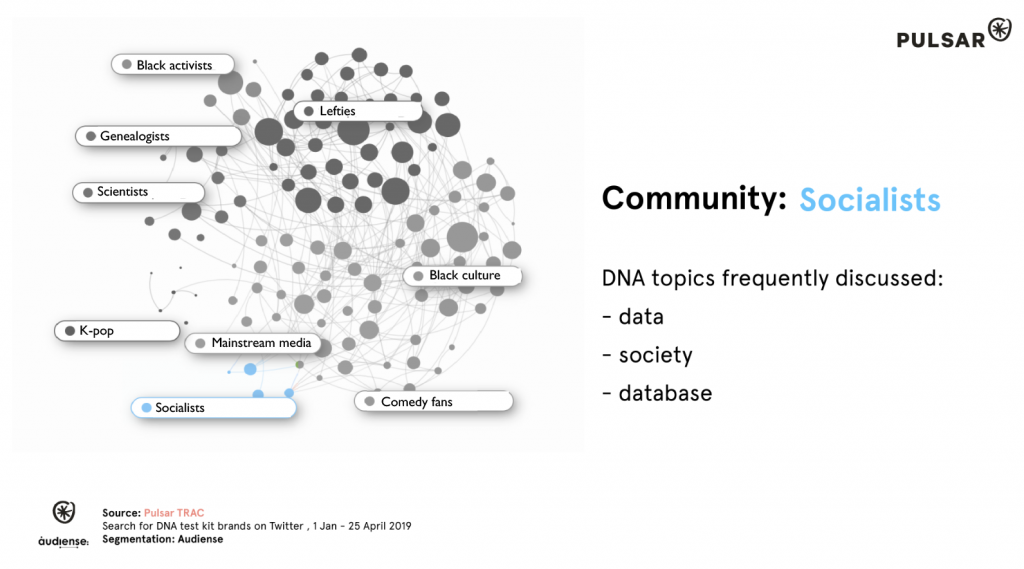 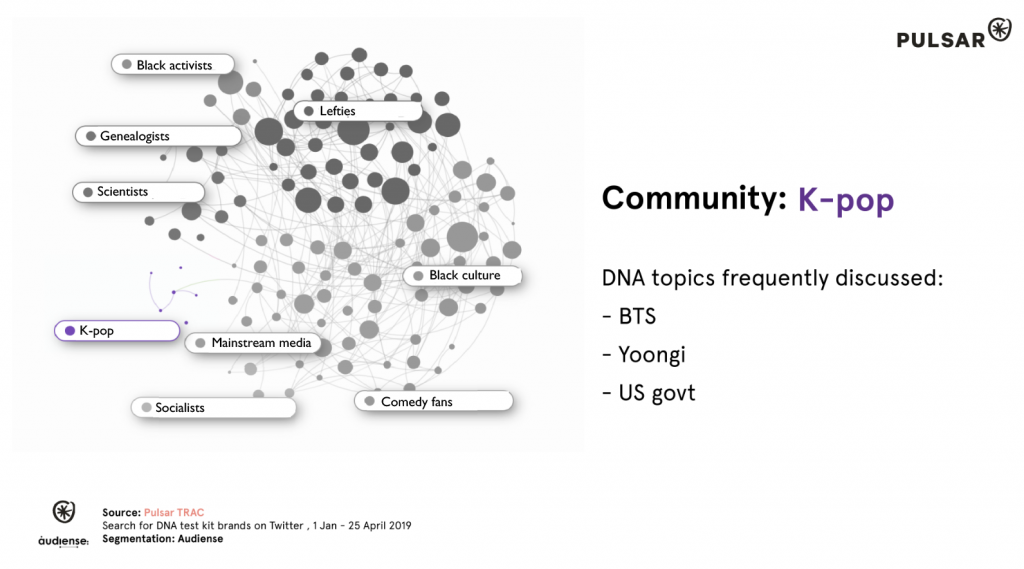 23 and Me and Ancestry.com were certainly the biggest names out there: 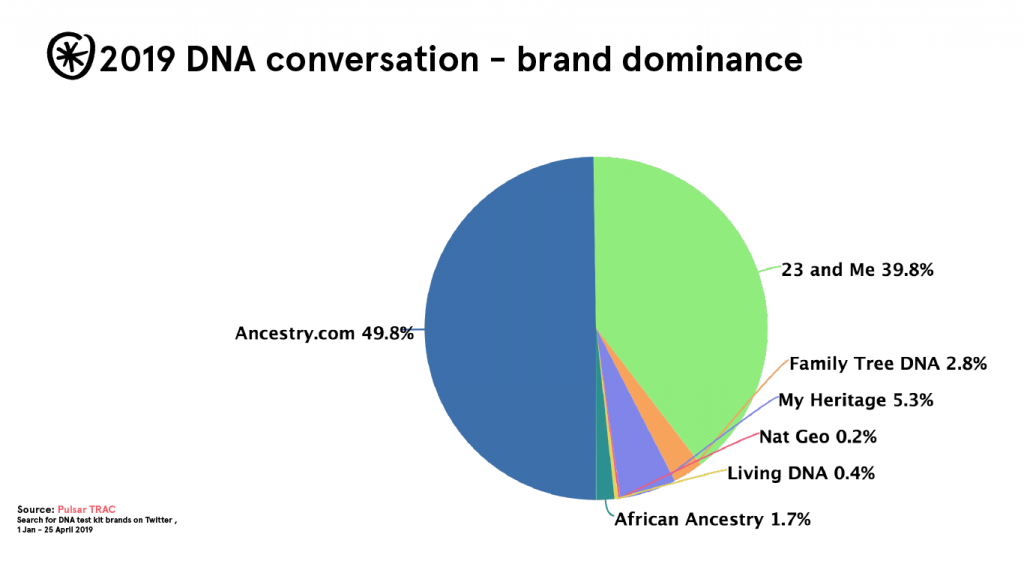 Although My Heritage have recently made a valiant attempt for more recognition by helping the Backstreet Boys to find out about their DNA:

We love sharing our #BSBDNA with you!  Now it’s time to take this whole journey literally, so we partnered with @MyHeritage to explore our individual DNA. Watch the video, then go to https://t.co/L2at5NTXmQ and use coupon code BSBDNA to get free shipping. #BSBDNA #MyHeritageDNA pic.twitter.com/2qeqhogibR

Brands like 23 and me and Ancestry are normalized, popping up at events like the Grammys and having people criticizing their latest ads and affiliations, making them easier than ever to politicize, and even meme-ify: