Does posting about them on social media increase your resolve?
Written by Victoria Gray

People love to talk about their new year’s resolutions.

Without being announced to your friends and family, a resolution hardly seems worth making.

On social media, a majority of posts we analyzed seemed to simply be a declaration of the resolution itself; a way to convince yourself you’re doing it.

Or in other words, people like to take a sort of pre-emptive pride in their imagined, resolution-following selves.

– Keep a plant alive for a full year. Any plant.
– Actually watch one of the Netflix documentaries I say I've seen
– Don't let the cat pee on my suede shoes anymore
– Kill it at everything all the time
– Stretch

I think it's doable except maybe the plant

This isn’t just bragging. Posting up what your new year’s resolutions are is a great way to be held accountable to them: everyone else has seen what you want to do, so you had better do it. Right?

Thought I’d throw out my New Years resolutions in public so I stick to them:

But those resolutions, or at least conversations about them, fizz out very quickly.

On Twitter, conversations about resolutions become significant only around late December, and quickly return to lower levels around mid-January.

Over the course of 2018, mentions of resolutions held quite steady at an average of 20k mentions per day that occur between February and November, starting to build up in December, growing to 119k after Christmas finished, and peaking at 656k on January 1. 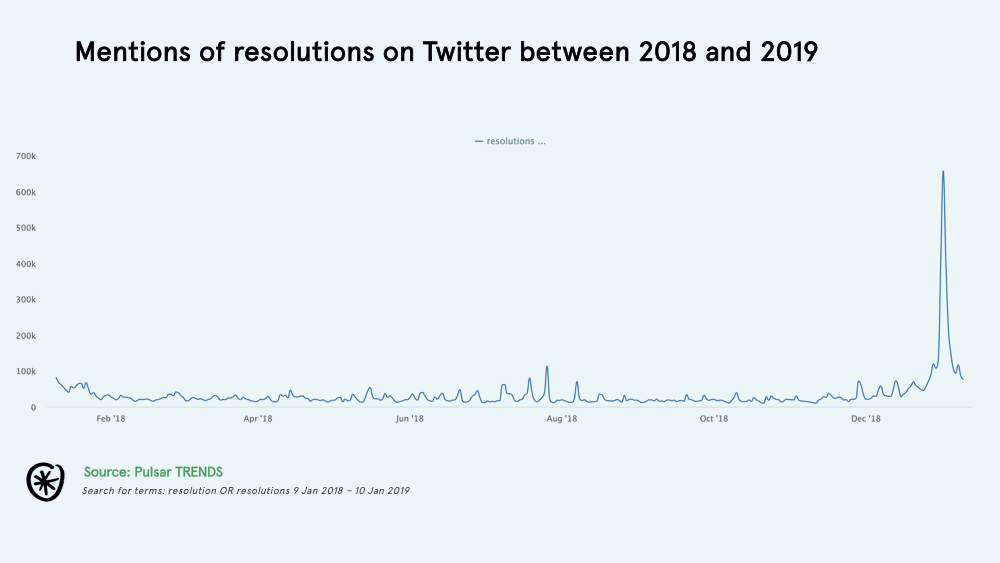 This year saw a more conversation that was more distributed throughout the holiday period, compared to last year, when mentions of “resolutions” were concentrated mostly in one big spike of 617k posts on January 1. 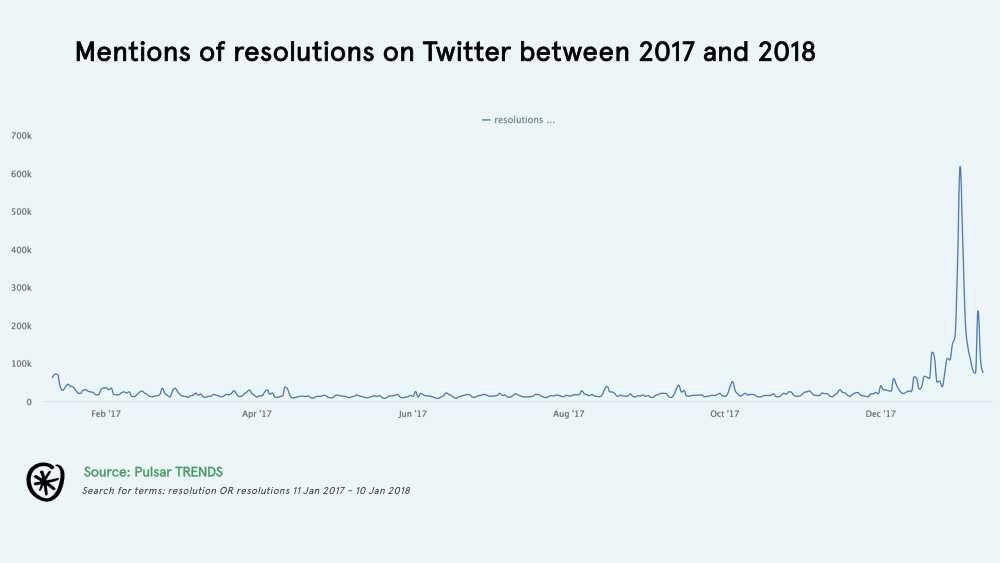 And what are the resolutions are people fantasizing about? Two of the classics are quitting smoking and losing weight, and both did pick up in conversation around January 1.

But perpetual self-bettering habits like joining the gym and stopping smoking also trend up and down throughout the rest of the year – ultimately the ‘new year’ hook doesn’t seem to help. We can see that there are different spikes for both habits at various points in the year: 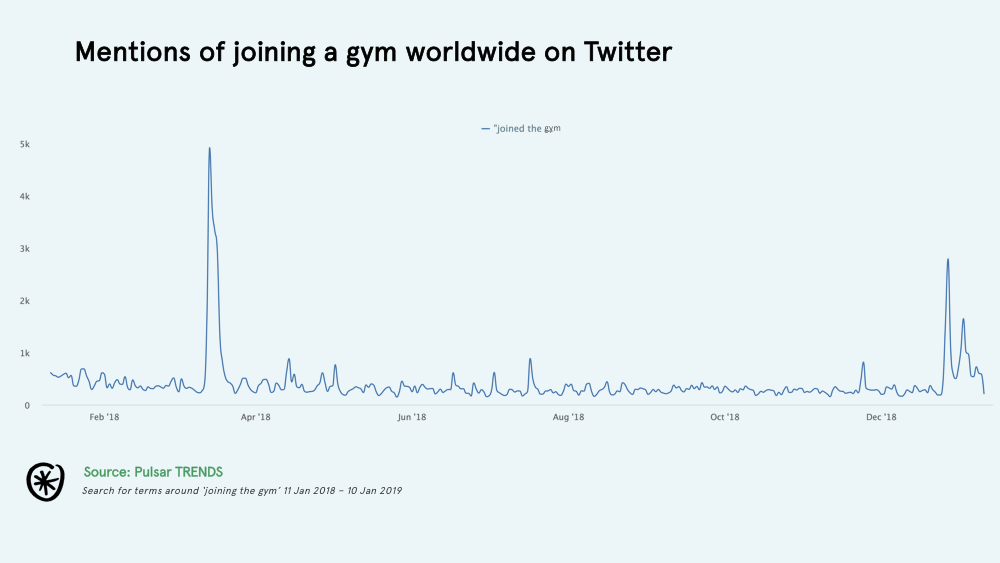 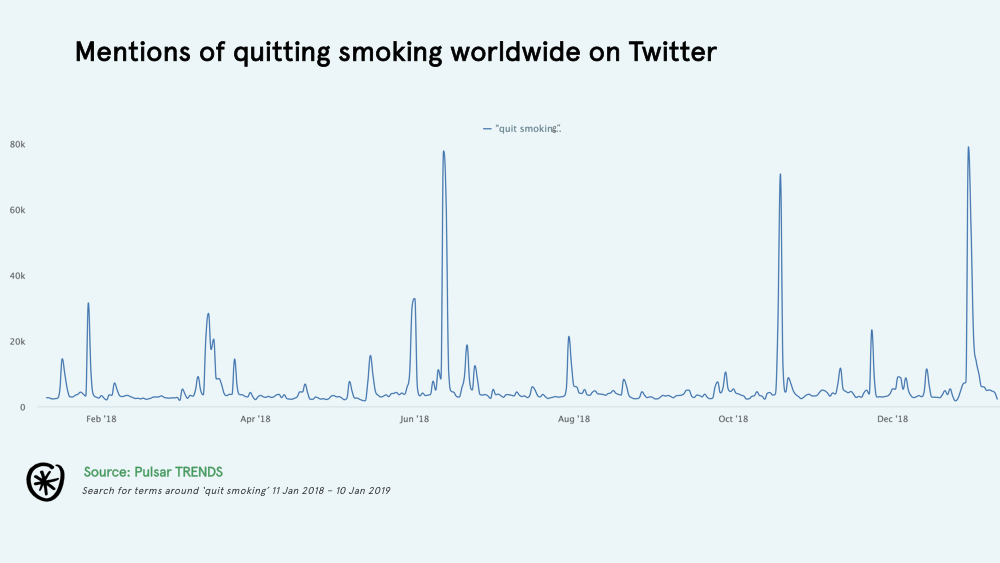 Although there’s a host of habits people want to pick up, from posting more memes to petting more dogs, a few of the most popular resolutions that were mentioned on January 1 this year included: 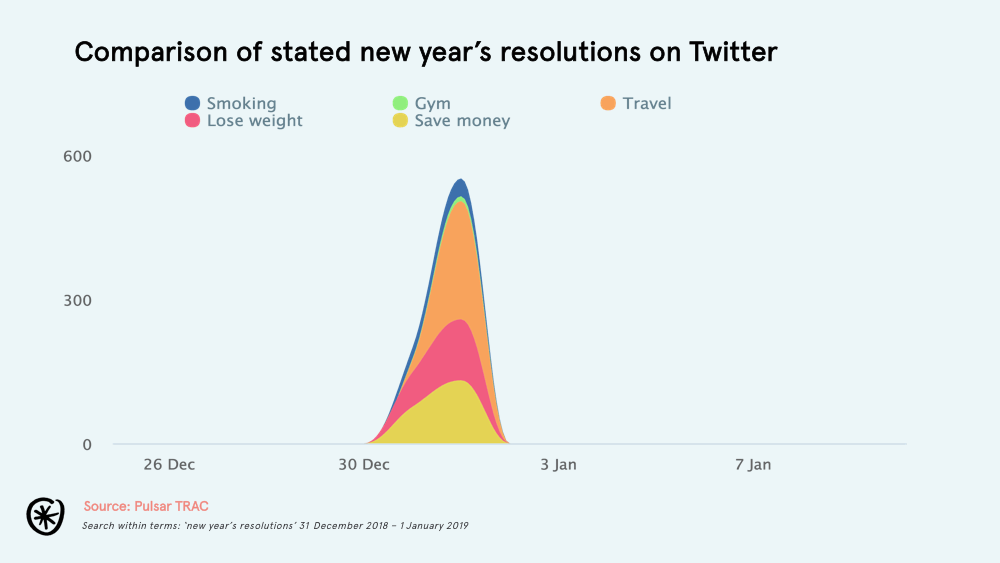 And some virtuous people even began tracking their progress via social posts, posting updates about their Day 1s, but most quickly betrayed their lack of resolve to post about Day 2 and Day 3… 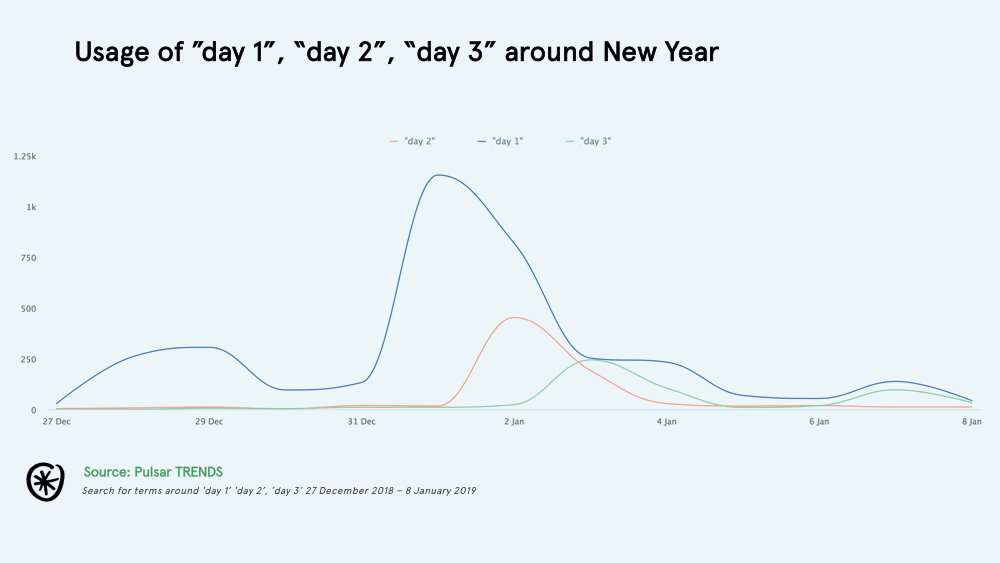 Mentions of “first day” alongside “resolutions” spiked on New Year’s Day, but usage of second and third day paired with resolutions steadily dropped as the days went on.

And if the posts about how well these resolutions are holding up are starting to disappear as we enter the second week of the year, it can probably be assumed that the resolutions themselves are probably not holding up either.

After all, why wait for the new year? Day 1s seemed to be scattered throughout the year, tracking progress on things like habits, jobs, and experiences, with little correlation suggest what the significance of the starting line is. 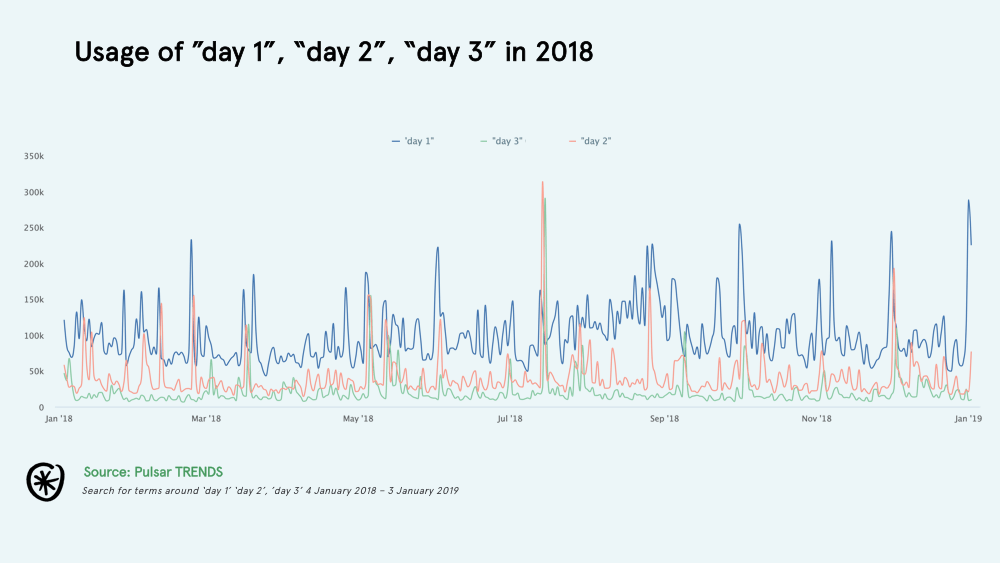 The rule that people won’t stick with their resolutions is now so well accepted that many new behaviors, ideas and resolutions-lite have sprung up around resolutions:

Don’t think you’ll be able to go without drinking all year? Try #dryJanuary. Need to declutter? Try Marie Kondo’s KonMari method and clear out your junk – once. Need more specific goals? Try the 19 for 2019 list, or monthly resolutions.

Last two beers of the year. I’m going to give #DryJanuary a try. pic.twitter.com/wIWtHM9Cbn

Here’s a breakdown of some more structured methods which people are directly comparing to the concept of new year’s resolutions: 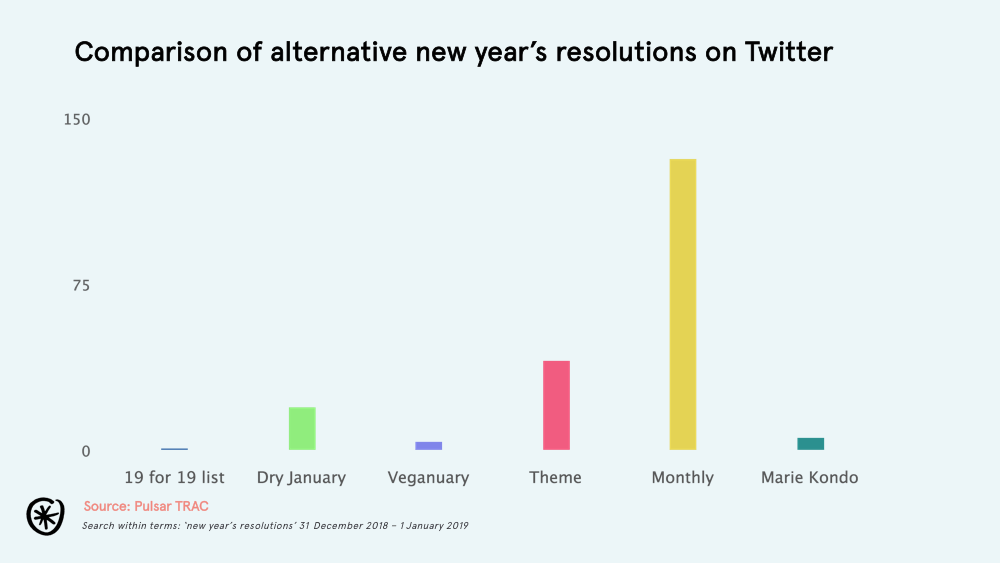 And of course those on Twitter who are too cynical to embrace even just those two weeks of optimism about human nature can stick to Twitter’s most reliable habit: sarcasm.

2019 Resolutions:
1) Develop no new interests or hobbies.
2) Consider being Hot For My Age.
3) Light villainy.

The meaning of TFW, a bittersweet acronym that’s here to stay