My Aesthetic: the fashion & interior trends behind an expression

Identifying emergent cultural trends & behaviors around the cool, the beautiful and the ‘aesthetic’

Two words, ‘my aesthetic’, have become a colloquial shorthand by which a person can express a powerful affinity for looks, imagery and ways of living.

I don’t have to keep up with an aesthetic. I am my own aesthetic. Everything about me gon move and make sense.

In this context, an aesthetic is frequently deployed as an indicator of something stronger than preference or interest. Instead, it frames a trend or series of images as building blocks in an individual’s sense of selfhood.

So, I didn't know that Dark Cottagecore is a thing??? This is, together with Green Academia, MY DREAM AESTHETIC ok, as a witch, this is EVERYTHING TO ME pic.twitter.com/se3pvRwahR

As the phrase has become more embedded in the wider culture, it’s variously used humorously, as a signifier of design, styling or buying intent, and even to describe user interfaces.

When did it slip into common usage? Google search data indicates that a 2020 uptick has since translated to enduring interest.

But when we explode this idea of an ‘aesthetic’ into topics and distinct subcultures, what do we find?

First, we looked to establish the context in which the phrase is used. Which medium attracts the most conversation around personal aesthetics?

Fashion and interiors emerge as the two leading categories, thanks to the active sharing of outfits and decoration ‘inspo’. Because while users shared media around fashion or interiors they themselves have pieced together…

… it appears far more common for the imagery and opinions shared to focus on more aspirational content. We also see a smaller, but notable, gaming segment. Conversations within this space appear linked to more consciously stylised games, as well as personalization on the part of the user.

This game is so my aesthetic that I'm considering getting myself checked to make sure they haven't secretly recording me and made a game based entirely on the cute stuff like this I love. ♥ https://t.co/2CnfVnaDly

In fact, this idea of personalizing an interface links back to the most significant search spike we saw earlier, which revolved around the ‘aesthetic’ of an IOS screen.

But what’s in an ‘aesthetic’? We can break this down into a number of different trends that emerged within our dataset.

A quick survey of these trends points to what’s been described as ‘Nowstalgia’, in which millennium aesthetics are adopted by Gen-Z. The retrospective optimism of the period, both economically and technologically, together with the absence of smartphones or social media, makes it a source of curiosity for those who were either very young or not yet born at the time.

Similarly, styles rooted in pastels and pink are breaking away from their association with 1950s domesticity to become associated with new, more feminist concepts. K-pop fans have played an important role in popularizing the aesthetic.

And finally, we’ve also seen Tumblr-centric aesthetics propelled further into the mainstream, with Cottagecore an instance of a community that doesn’t simply share a common affinity, but also supports one another through affirmation and horizontal economies. We explored this previously in our deep-dive into the Witch subculture.

Over time, these distinct notions of ‘an aesthetic’ have grown within the wider consciousness.

Clearly, each of these trends is associated with different mediums of expression, whether that’s fashion, interiors, gaming, music or beauty & hair. In the interactive visualization below, we can illustrate how a distinctive aesthetic can find varying degrees of expression and association.
It’s clear that Y2K is an influential trend across numerous different mediums. The top Reddit post on the topic, written by a graphic designer, highlights how impressive the ‘branding’ of Kpop group NewJeans is. On the face of it, this appears to be a hagiographic response from an already very engaged fan. Equally, it also speaks to an intersection between Korean aesthetics, global pop music and branding. These ‘New Retro’ stylings are already emerging across brands in the web3 space, and appear within the spheres of technology, media, and entertainment.

Cottagecore, meanwhile, is most strongly referenced with regards to interiors and fashion – notwithstanding its intersection with Minecraft creation ideas. Cottagecore interiors are commonly discussed across Pinterest, both in reference to realistic redecoration plans, and sometimes simply as escapism and a point of difference with the user’s own, perhaps more hectic and urban lifestyle.

Against this backdrop, we also see individuals debating the inferred ‘political’ aspects of a given style.

As seen elsewhere with Barbiecore and Old Money, these aesthetics bring political connotations as they are re-contextualised and appropriated across platforms and communities.

On that topic, we can also take a closer look at which distinct communities are driving the ideas and concepts currently under discussion. 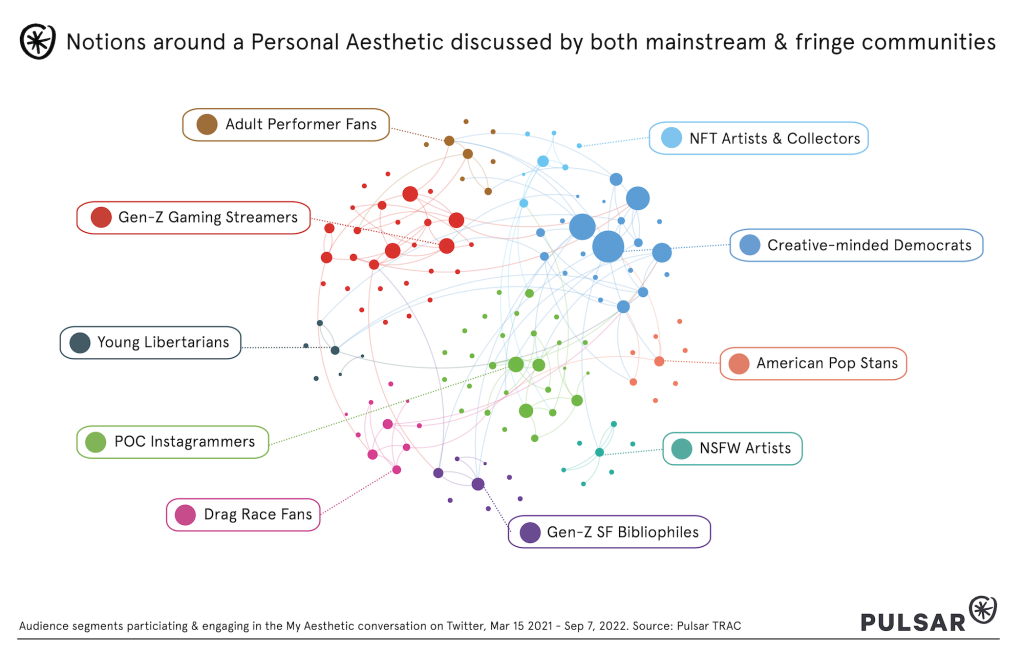 Not only do streamers use the term to refer to games, they also deploy it in reference to more inchoate ideas:

I bet later games even get more my aesthetic anyway so

Here, the phrase is doing a lot of heavy lifting, combining a lot of hard-to-describe feelings about preference and intangible ‘goods’ into a pithy phrase.

At the same time, the Creative-minded Democrat and POC Instagrammer communities use the term in a more openly politicised way:

“Uncomfortable white people is my aesthetic” – me 2014

This recurrence of ‘my aesthetic’ acting as a shorthand for more complicated feelings is similarly present amongst NFT artists and collectors, where it is used almost interchangeably with concepts like ‘my personality’ or ‘my value system’.

Very few artists in web3 are willing to break the law every time they create art. People often ask me how I feel about arranging legal access, and the answer is it simply isn’t the same. The stakes makes the art greater. The outlaw vibe is part of my aesthetic

Naturally, these groups engage on a more everyday basis with posts around fashion, interiors and beauty. But it’s striking that many of the most popular posts reflect an evolution and ‘opening up’ of meaning.

Finally, we can also use Pulsar TRAC’s AI image recognition to surface which picture formats occur most regularly across social platforms. Of the different image types we can detect, we selected the three most common within this particular dataset: Mirror Selfies, Unboxing and Interior Design.

Twitter sees the highest occurrence of Mirror Selfies, which appears linked to the sometime notion of the platform as a reflection of one’s ‘personal brand’.

Instagram has the most even distribution, but the highest number of posts marked as ‘unboxing’. This appears to be correlated to the presence of brands, retailers and influencers, who use the phrase to build interest in the aesthetic they are looking to sell.


Pinterest is home of interior posts, partly because this posting behavior crosses demographic lines. Unlike fashion posts, which appear on Pinterest slightly more linked to younger communities, interiors are a popular topic among both older homeowners and students looking to personalize whatever space they have available to them.

Even as the conversation around “my aesthetic” provides an invaluable entry to point to wider conversations around fashion, beauty and interiors, it’s also notable that a semantic and perceptual shift is taking place around the phrase, one that is likely to have long-standing impacts on how individuals, brands and communities talk.

Vegan Leather Alternatives are in: but do consumers see them as sustainable?

How Haircare came to resemble Skincare: Audience Behavior in the Self-Care Space

Sustainability: what does it even mean today?