Which brands have been exposed to the highest levels of misinformation?

Dahye Lee
& Alex Bryson
It’s been almost three months since we first introduced the Brand Misinformation Index, allowing us to visualise the exposure of some the world’s leading brands to misinformation.
So which brands have endured the most time at the business end of the index?
The most recent iteration of the index, updated week by week and accessible here, has Tesla at the top – suggesting that the car manufacturer has seen the most mentions across untrustworthy sites, relative to the total conversation across news and blogs. 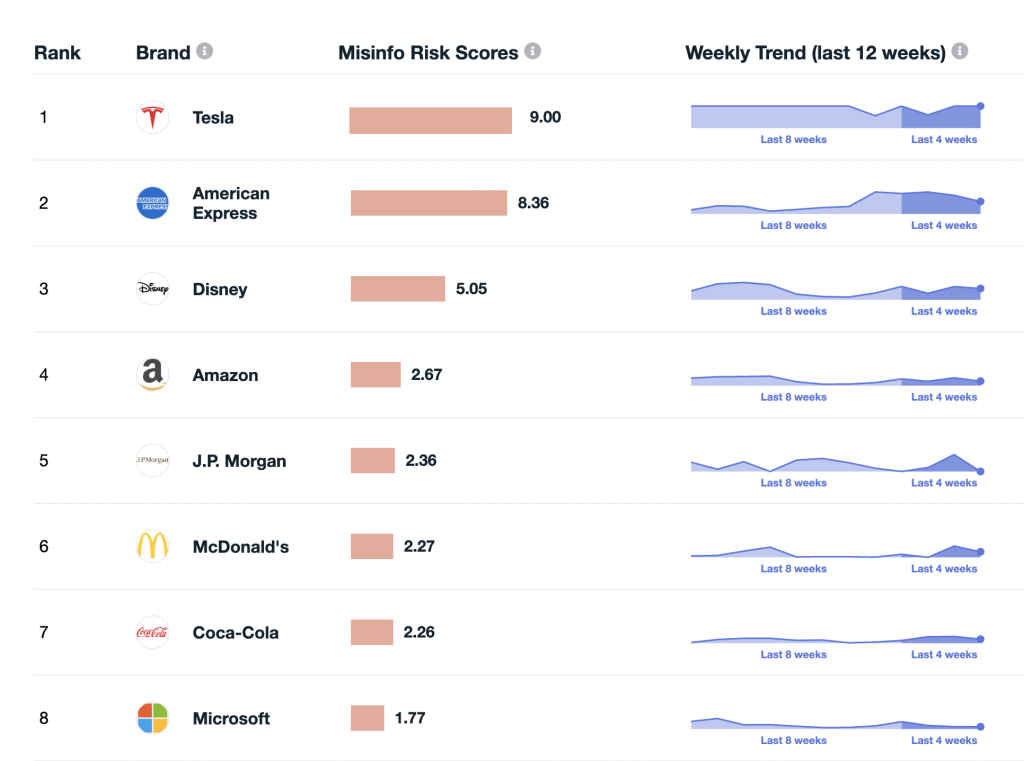 But the EV manufacturer has shared that rather dubious honor in recent weeks, thanks to shifts in the wider political, economic and societal context.
Twice AMEX has taken top spot from Tesla, thanks to the adoption of a new merchant category to track gun sales. This story came in two waves, the first of which reframed the story as an assault on civil liberties, while the second incorporated hyperbolic claims as to the scale of the reaction, using terminology such as ‘nearly half US states issue warning to credit card companies for tracking gun sales.’
So what pushed Tesla back to the top spot?
In part, this change was driven by wider conversation around the Biden administration’s Inflation Reduction Act, as various finance and trading publications detail the manufacturer’s seeking of U.S Tax Credits at the expense of Berlin. The loose structure of the reporting, which hinges on ‘people familiar with the matter’ as the primary drivers of narrative, creates the potential for misinformation within a community primed to make financial investments on the basis of information received.

If you would like to learn more about the Misinformation Risk Index, or how access to this data can help you to safeguard your own brand, simply fill in the form below.