Much like the rest of society, healthcare and the medical system have been designed by men, mostly for men. From early psychiatry’s obsession with “female hysteria” to the mystery of gut health and IBS, to hormonal issues and endometriosis, to sex education, pregnancy and menopause – misdiagnosis and a lack of solutions to deal with common conditions has taken a toll on women’s health and well-being for centuries.

But as healthcare undergoes its own revolution thanks to better awareness, personalized medicine, advances in DNA science, self-tracking through applications, at-home-testing and devices, a new space is emerging where entrepreneurs are trying to address the unmet needs of women’s health.

After seeing her friends struggling to understand, an 11-year-old creates an app to spread information about menstruationhttps://t.co/N6x4NZ5wh0

We analyzed public conversation at this intersection across Instagram, Twitter, TikTok, Forums, Reviews and more in September and October 2021, looking more broadly at the women’s health conversation, and how that conversation shifts once we start looking at apps, devices and the like. We also zoomed in on the “Femtech” – a new term, and one not without its complications– which turns out to sit at a remove from authentic, female-led conversations about health.

Within this analysis, we’ll be covering:

The main topics in the overall women’s health conversation

Our analysis brought in English-language posts made across the US, UK, Australia and New Zealand. And while certain trends, such as the relative popularity of periods as a topic, endure beyond national boundaries, we also see significant variation in topics such as the menopause and women’s rights.

For all these discrepancies in share of voice, underlying the global female health conversation is the shared perspective that women are not adequately served by existing practices. 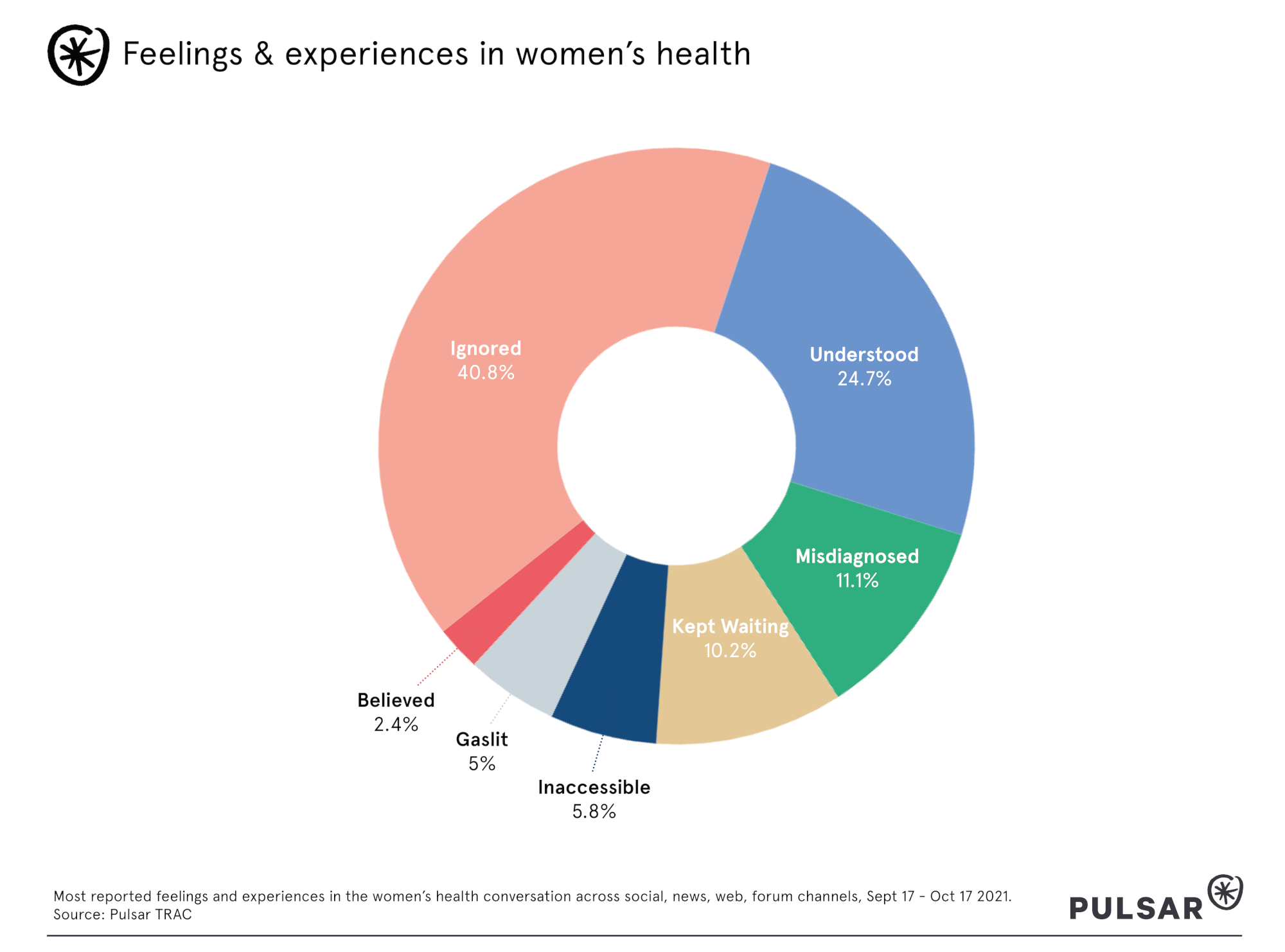 While individual practitioners are praised, and online conversation will tend to highlight the extremes of experience, it’s clear that significant discontent has built around the idea of being ‘ignored’, ‘undiagnosed’ or even ‘gaslit’.

Thanks for listening. It takes 9-10 years on average for a woman to get diagnosed with endometriosis. It‘a disgusting.

Naturally this presents a very real unmet need among women. So what form will a solution take?

Femtech: an emerging, but complex trend in healthcare

‘Femtech’ is a phrase coined by the CEO and founder of period-tracking app Clue, to better describe the emergent sector.

Clearly, the trend is on the rise, crossing over into common usage sometime in 2020.

However, there’s confusion over what it actually means. By looking at the most popular Google searches, we see queries range from the fundamental (‘What is Femtech?’) to the misguided (‘Who owns FemTech?’) to the nonsensical (‘Femtech phones and price’). 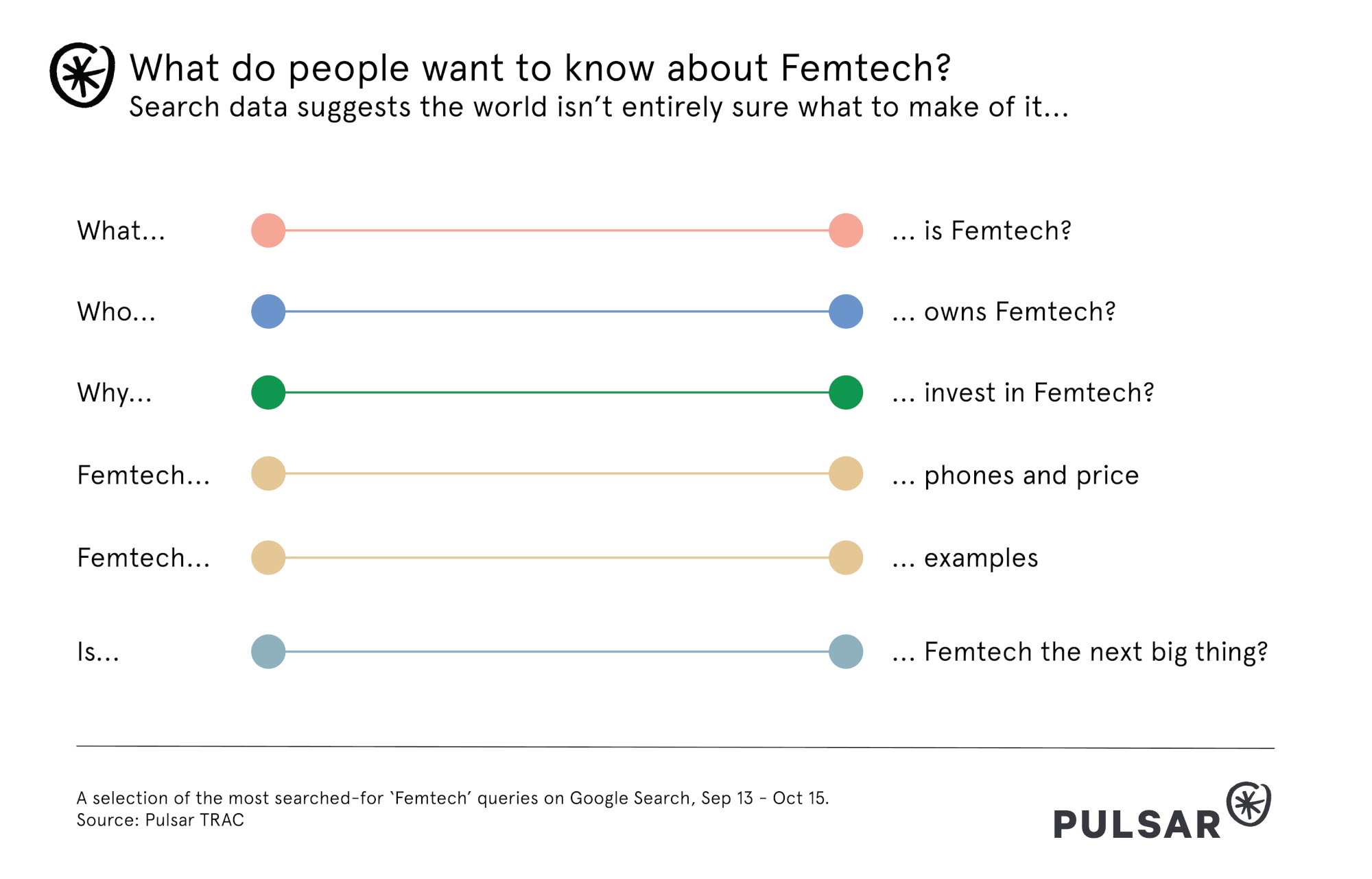 And it’s little wonder that the phrase’s associations have become muddied, when you analyze who is engaging with it online. 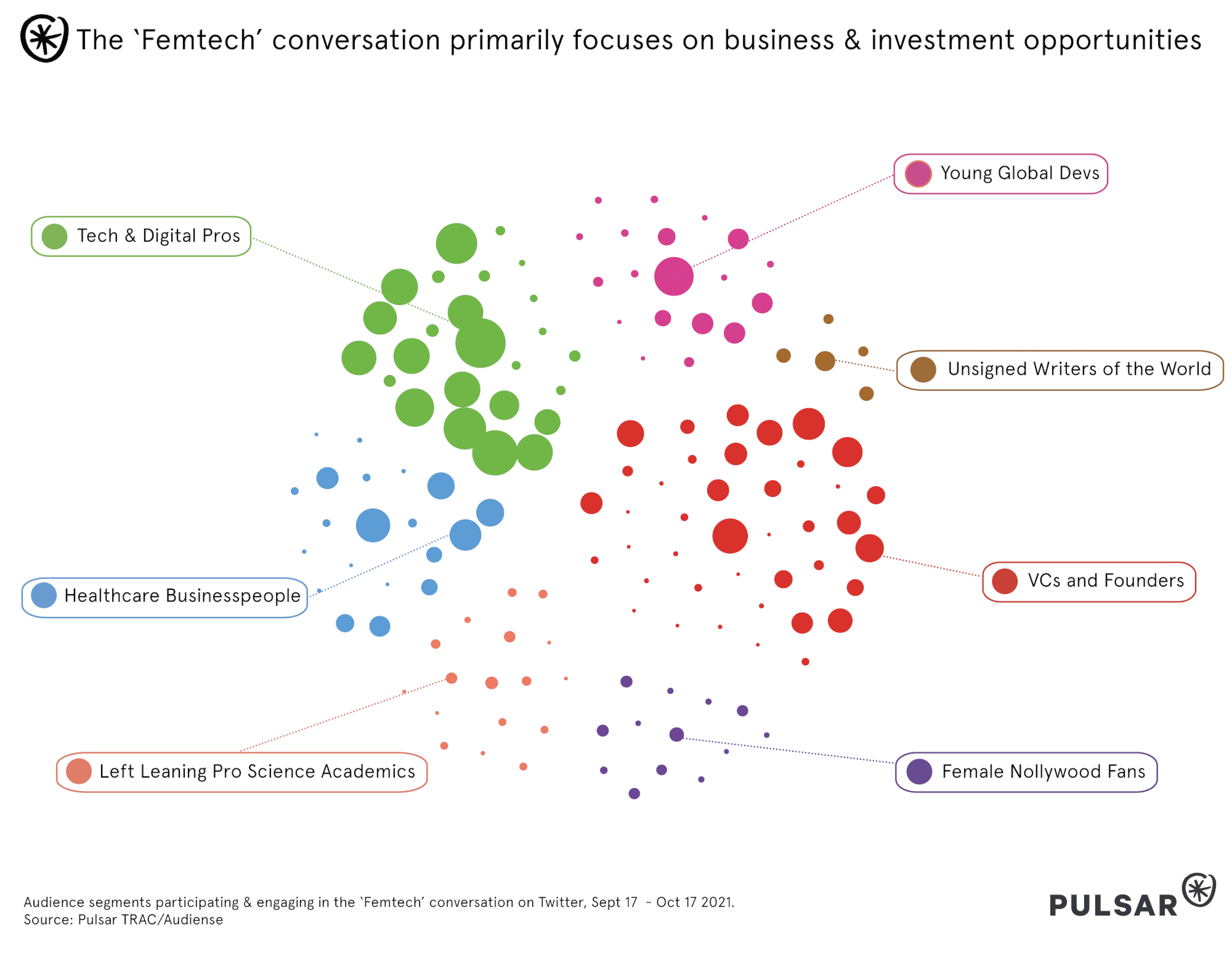 While this conversation may have begun with female-backed business, it has since shifted to incorporate a high proportion of male participants. In Healthcare Businesspeople and Tech & Digital pros, meanwhile, it includes individuals who are more interested in the technology as a vehicle for investment than FemTech as part of lived experience.

#FemTech is still misunderstood to be about female-founded tech startups. It is not.

FemTech is a technology ("tech") sector focusing on women's health and wellness ("fem").

And it's not just a tech sector, it's a women's health innovation movement!

So, if ‘Femtech’ gives us a very partial view, we can achieve a better understanding by simply returning to our analysis of the overall women’s health conversation  – and focusing our attention on the parts that contain any reference to technology. 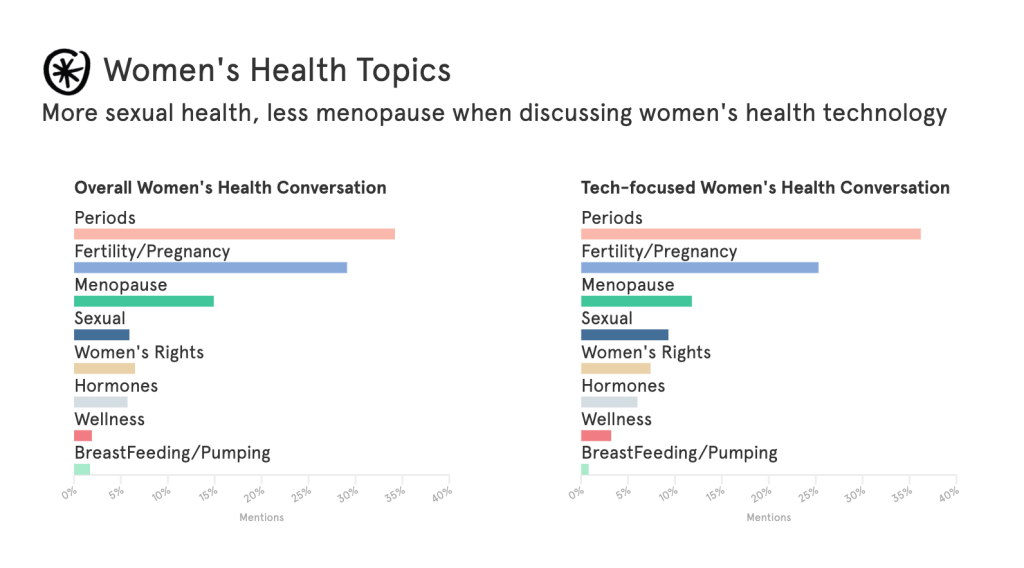 That said, periods over-index within the female health and technology conversation, which is little surprise given the age of participants and the existence of a number of app-based solutions.

The existence of these apps can create positive outcomes that are not simply practical, but also foster feelings of control, empowerment and self-learning. 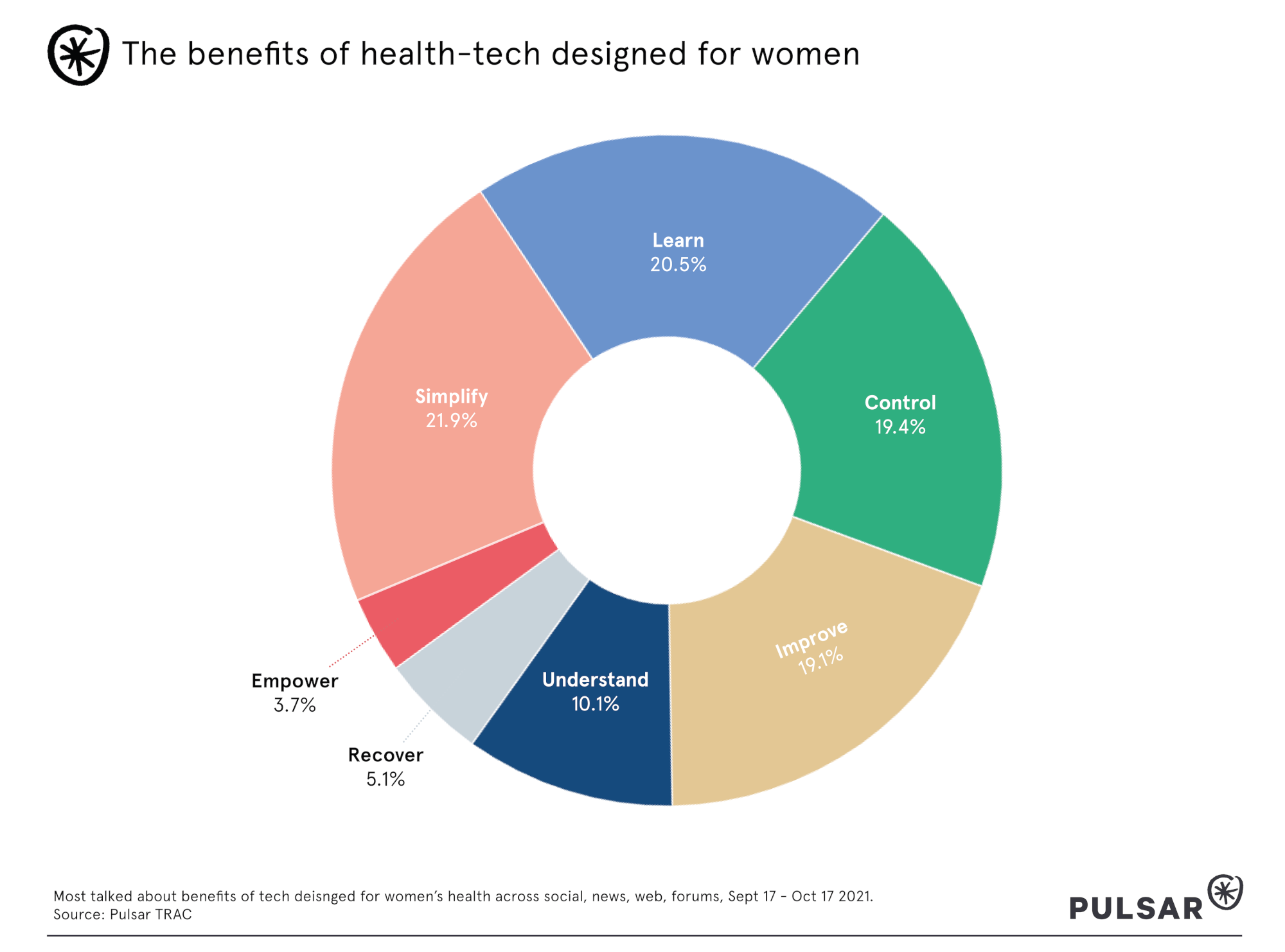 These apps are regularly cited within the wider female health conversation, with particular emphasis falling on Flo, Clue and period-tracking apps more generally. 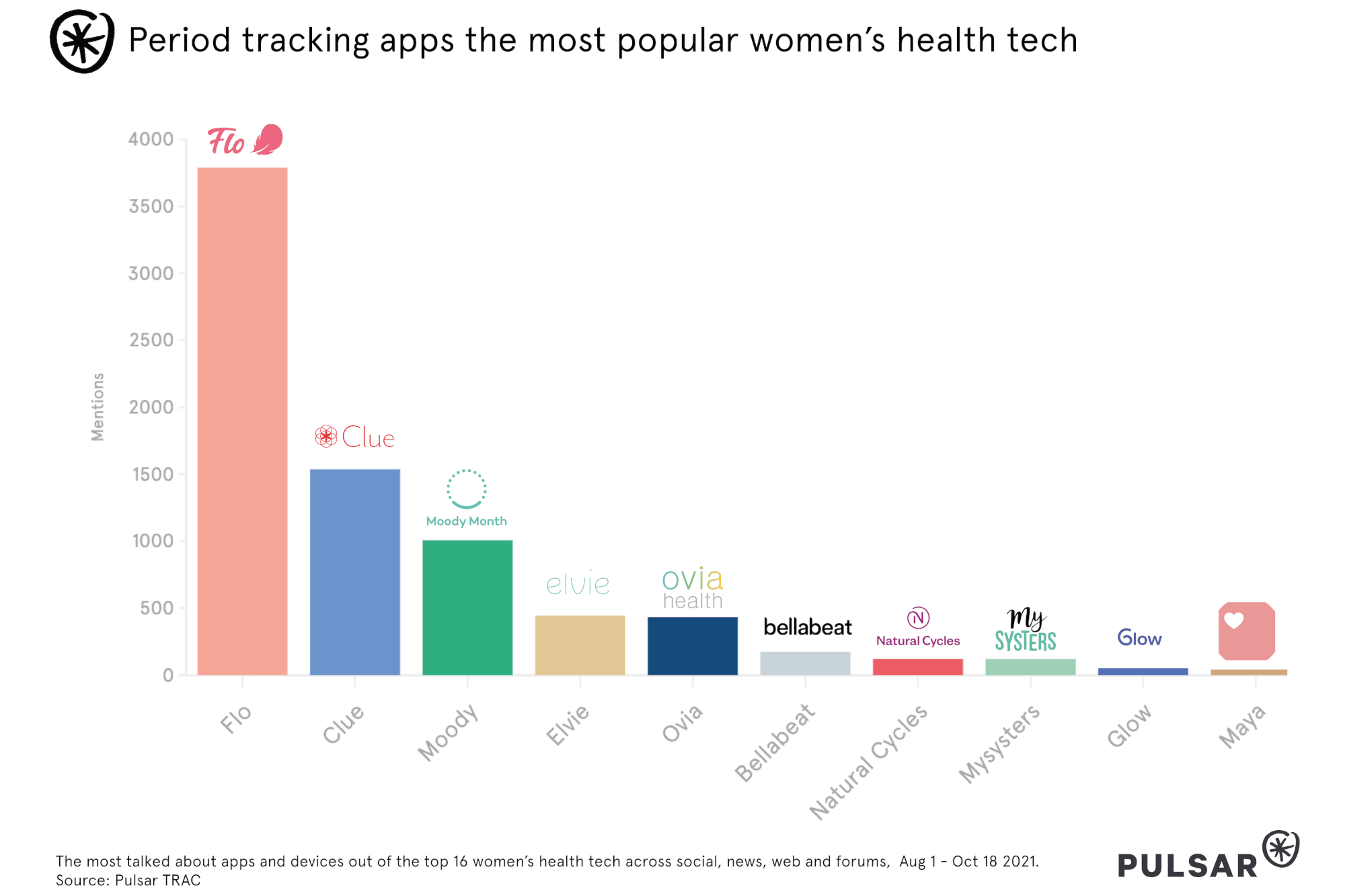 This suggests that these apps have crossed over from the slightly ephemeral idea of ‘Femtech’ into the everyday, lived experiences of numerous women across the world, complete with a brand of humor rooted in shared observations.

The audiences in the Women’s health & tech conversation

Naturally, this conversation does not take the same form across different online platforms.

Looking at the types of content most-commonly engaged-with, we see that Pinterest, for instance, hosts a lot of conversation around fertility and wellness. Hormones and fertility follow, with little else resonating.

Instagram, on the other hand, spotlights conversations on menopause and sexual health, Facebook fertility and menopause, while Reddit plays host to discussions, questions and advice on periods and fertility.

Our exclusive data partnership with doctor’s network Sermo also enables us to hone in on the conversation amongst doctors and healthcare professionals:

Having already examined the limitations of the ‘FemTech’ audience, we can ascertain a more accurate picture by focusing on the women who engage in conversations at the intersection of female health and technology. 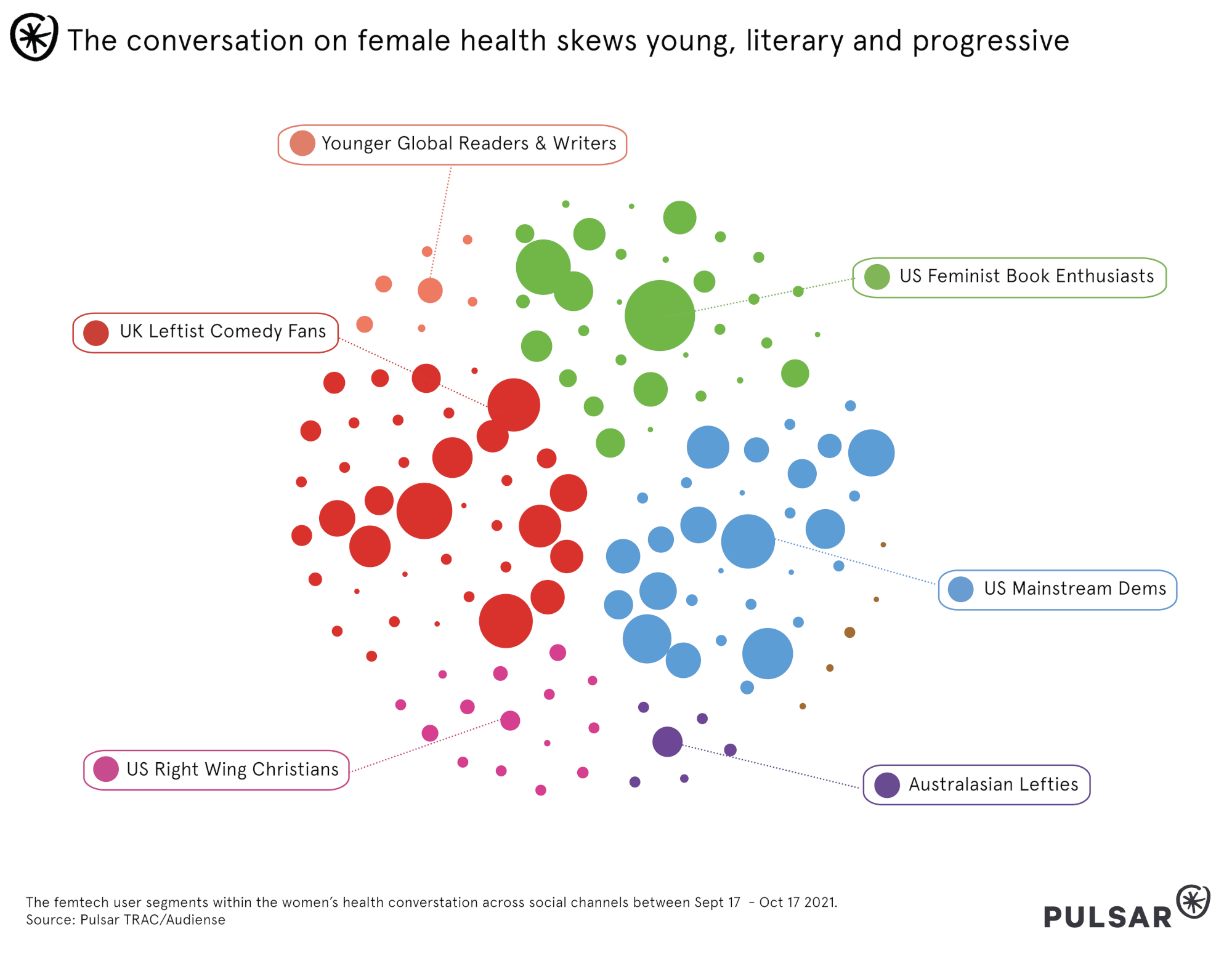 We see that it’s UK leftist comedy fans who are really driving the conversation around menopause.

Global Fans and Stans, meanwhile, display an openness in talking about periods, and PMS in particular – accentuated by viral posts from South East Asia and the Caribbean.

But why do Younger Global Readers & Writers talk about the menopause, given their youthfulness? Contrary to other communities, this group isn’t so concerned with sharing lived experiences as it is with discussing menopause experiments carried out on Marmosets.

Marmosets don’t experience menopause. So why is @UMassAmherst subjecting them to cruel and useless experiments about menopause?

As elsewhere, we see younger communities exhibit a desire to better their health – but not at the expense of their values.

The vibrant conversation around period-tracking

If we want to view the intersection of female health with technology, then it makes sense to explore periods specifically, given both the popularity of period-specific apps and the social indicators that these are impacting behaviors and perspectives.

By comparing the wider conversation about periods with the women’s health and technology overlap, we can chart how these apps help to create a positive attitude in which learning, understanding and a sense of community are all fostered.

Naturally, this conversation is not entirely utopian, incorporating as it does concerns centred around data and privacy,

The conversation around menopause and (lack of) tech

Menopause, on the other hand, is far less associated with technology.

And this would appear to constitute an opportunity for new solutions within female-facing tech, given that some of the most discussed topics within menopause are those that incorporate elements of mental wellbeing. We’ve seen within the period-app conversation how apps are perceived to aid with community and education, both of which would be invaluable in supporting women through this stage in their life. 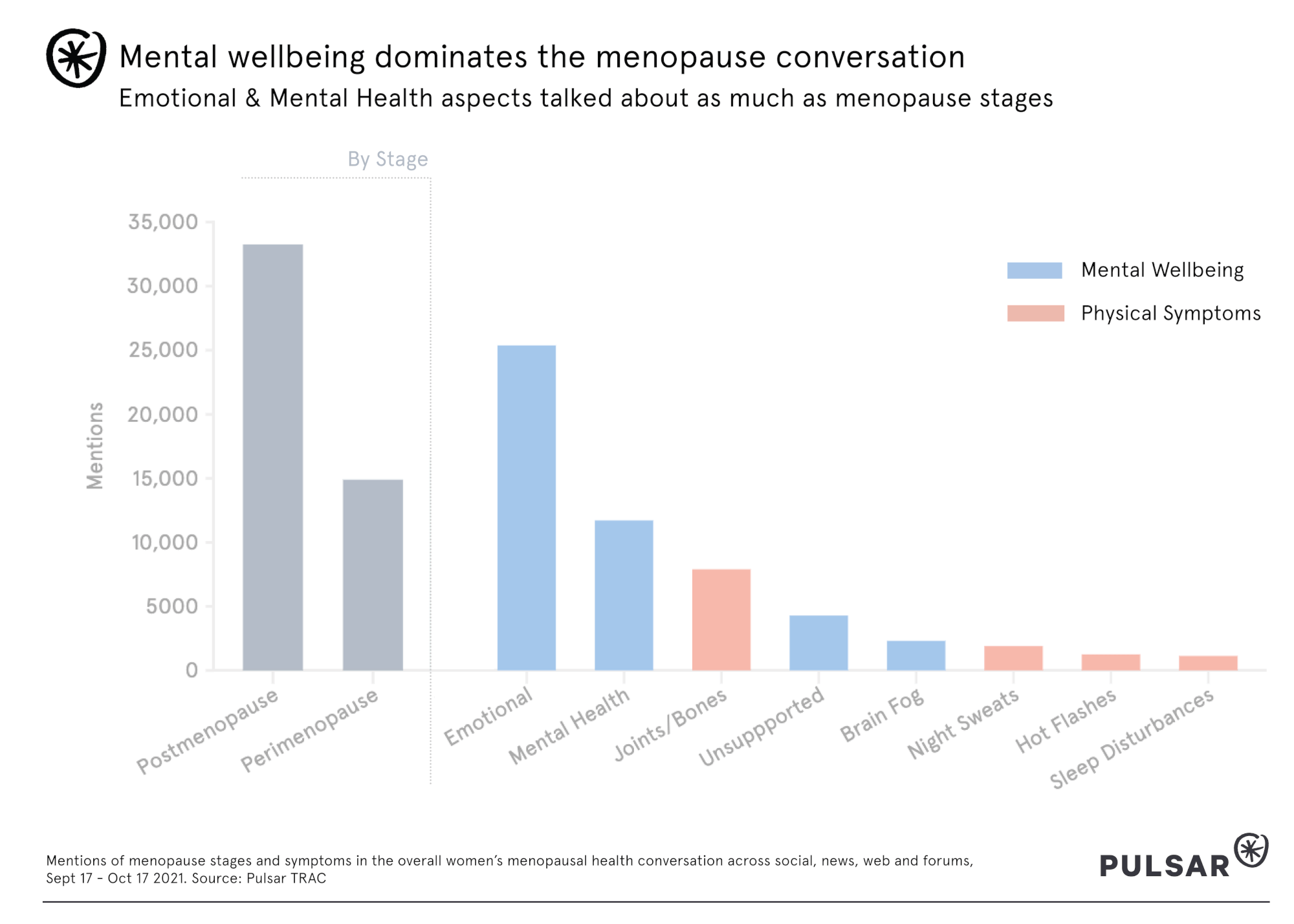 And this is accentuated by the fact that menopause is the topic most commonly linked to feelings of misdiagnosis and ‘gaslighting’ in our analysis.

People talk about the same topic differently, however. If we view how this same menopause conversation plays out amongst Leftie Comedy Fans, the single-most engaged group within the global discussion, we see how they differ from the norm. 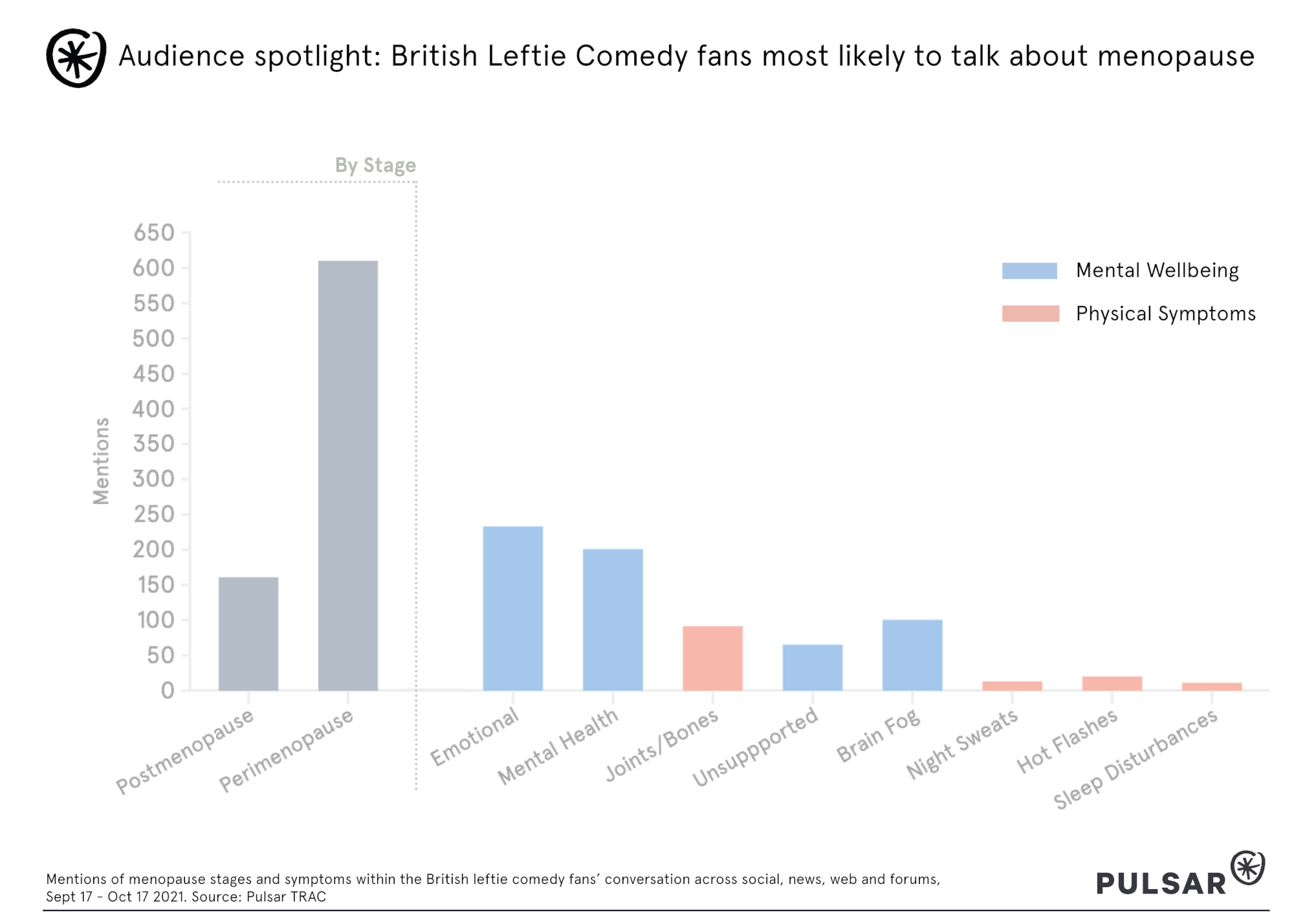 In this instance we see perimenopause, elevated above all else – in large part thanks to the proliferation of posts urging education and understanding.

If you are a woman and you are heading towards 40 in order to look after your mental health properly you need to understand the perimenopause.

There isn’t enough training on this so it’s up to us to educate ourselves & others. Great book 📚💗#WorldMentalHealthDay @hayleylever pic.twitter.com/2gUwlBM2nw

Much-needed changes are finally beginning to take place within the space, as emergent technology helps provide services beyond traditional institutions and structures. The evolution is far from over, however, and listening to the genuine experience of women is going to play a major part in ensuring this new wave of technology, whether it’s called ‘Femtech’ or otherwise, remains fit for purpose.