When lockdowns came into effect, high streets, offices and schools emptied. Where did everyone go? Increasingly, the pixellate landscapes of video games. And, when they weren’t playing games, the world was talking about them more and more.

Using Twitch mentions as a barometer for the wider gaming conversation, the Pulsar research team saw a vertiginous leap in volume between stringent restrictions coming into place and their fazed easing. Prior to 22nd March, the date the UK locked down, worldwide volumes for Twitch conversation sat at around 213k daily. From 23rd June, however, this had soared to north of 400k, a 91% growth. And with that growth – came important changes in the makeup of the audience. 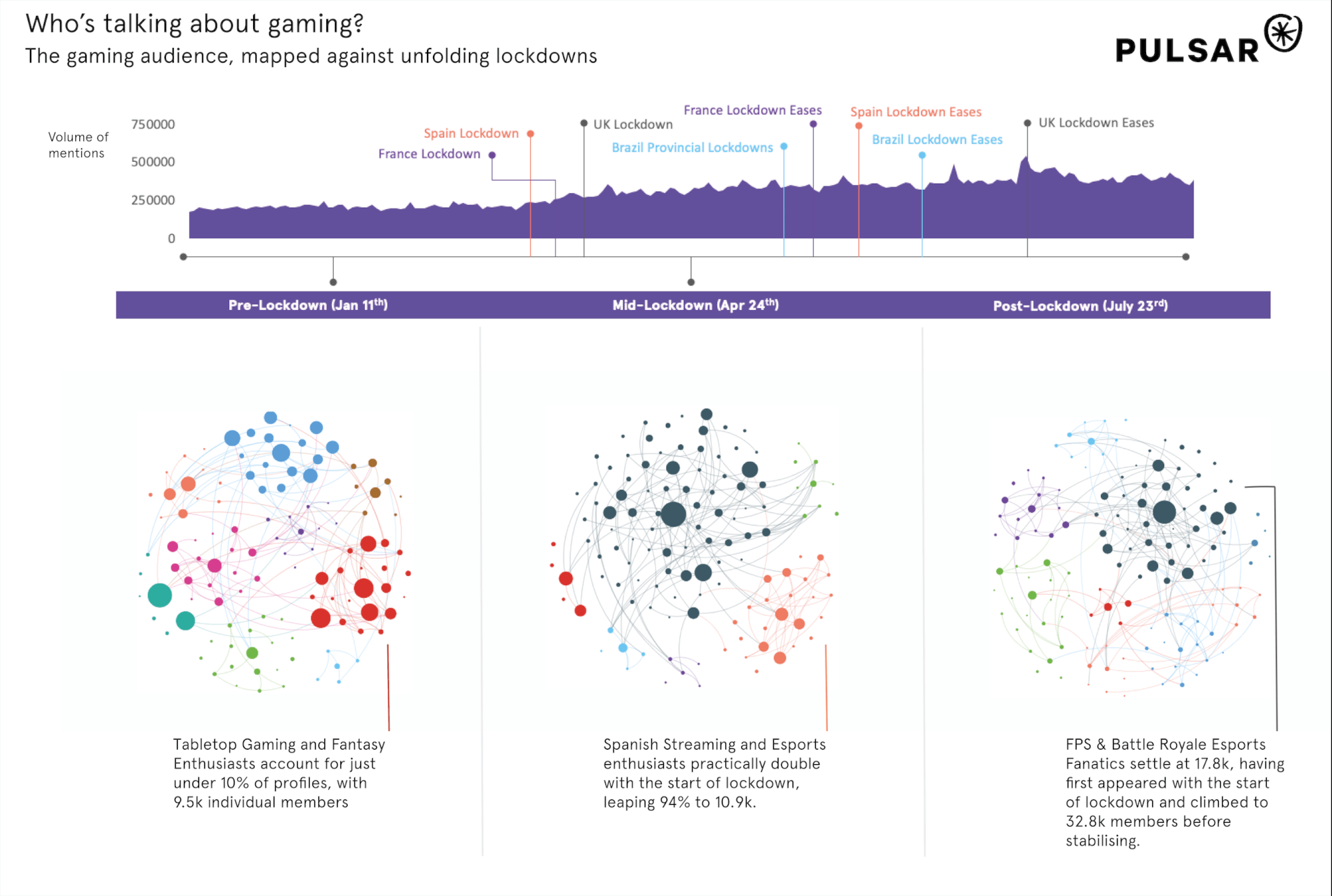 What happened? On the one hand, it’s self-evident. The lack of opportunity for other forms of socializing or entertainment saw gamers lavish more time and attention on activities that could provide those things. 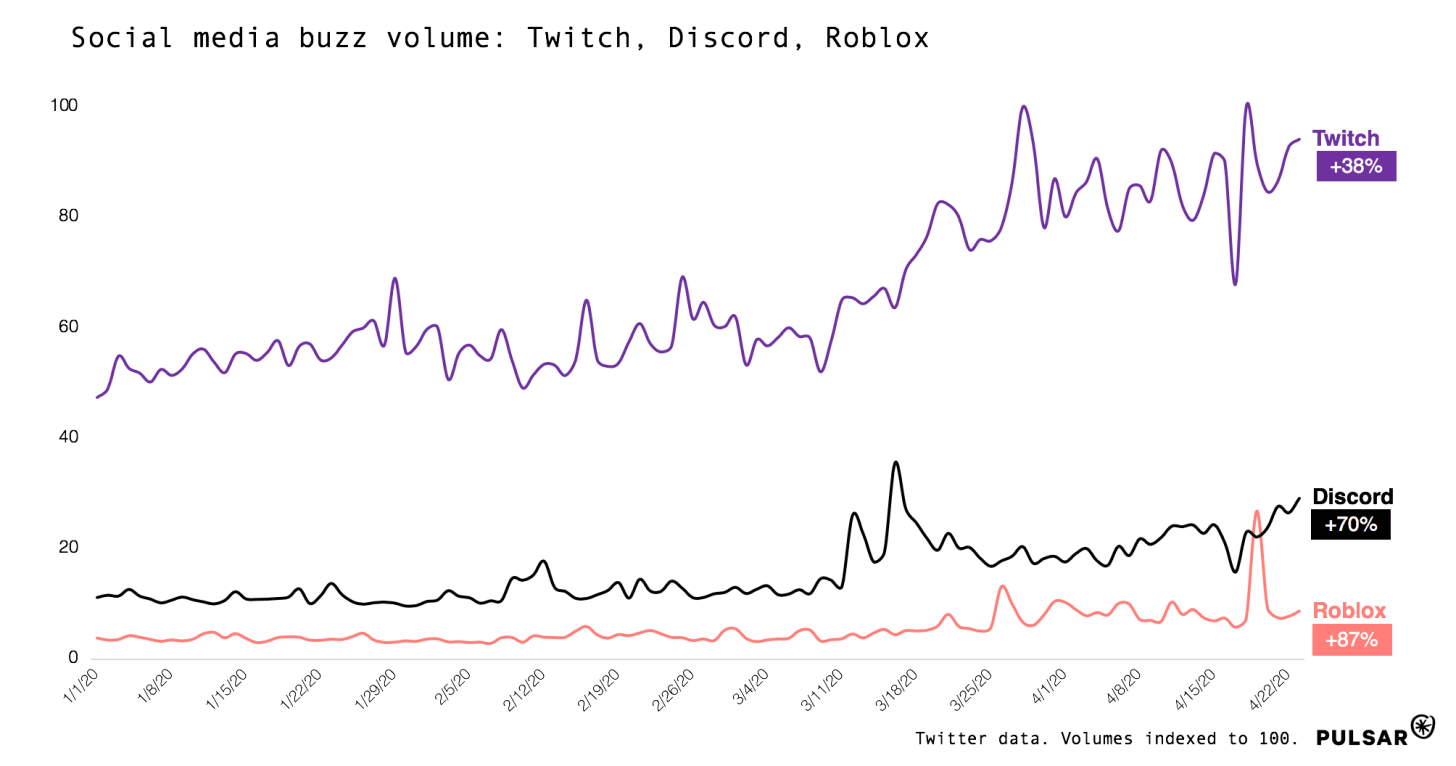 The familiarity of certain games, together with their inherent order and predictability, also saw them picked up as a form of comfort blanket.

If that explains why games were adopted en masse, it doesn’t necessarily account for their continued popularity. On that point, we only need to analyze the growing volumes of conversation centred around Twitch to see evidence of how vibrant gaming communities, sharing common languages and affinities, incorporate new members, encouraging them to sustain their current levels of engagement with the medium.

So what do we mean by conversation ‘centered around’ Twitch?

You can file Twitch alongside Twitter and Tinder as T-words now synonymous with socializing online. The Amazon-owned platform is used by professional and casual gamers to broadcast their in-game performance to an audience.

We combed Twitter for mentions of Twitch across set times within January (pre-lockdown), April (mid-lockdown) and July (post-lockdown), which pulled in both conversation about the platform itself and links that redirected to it. As owning a Twitch account is indicative of a certain degree of engagement, the conversation around the topic served as a convenient proxy with which to measure increased video game engagement.

Here are the key takeaways, explored in more detail: 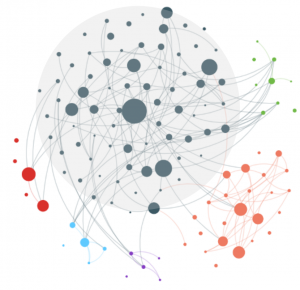 1 – Conversation skews in favour of shooters

Prior to lockdown, Tabletop Gaming and Board Game Enthusiasts accounted for the most Twitch conversationalists, with just under 10k participants.

Over the course of worldwide lockdowns, however, this community was dethroned by First-person-shooters (FPS) and Battle Royale Enthusiasts. Through analyzing the conversation within the group, we can see how titles such as Fortnite and Call of Duty leveraged their existing positions as market leaders to dominate the playing habits and dialogue of the community. (here’s more on how the Call of Duty audience grew over lockdown alongside that for Animal Crossing).

The immersion and cathartic violence within these games, which had already seen mass engagement prior to lockdown, was likely even more of a powerful incitement for gamers given the intangibility of the pandemic, boredom and looming economic catastrophe. 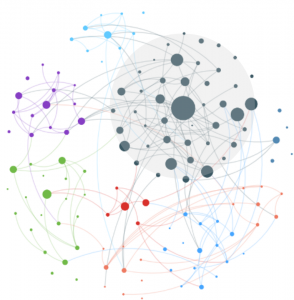 2 – Spikes in activity settle into behavior that appears more sustainable

The ascension of FPS and Battle Royale Enthusiasts was not linear, however. Instead, the community rapidly coalesced from the existing gaming community at the start of lockdown, at which point it leapt to around 33k members from something of a standing start.

And yet, despite the steep increase in conversation around Twitch, this particular group contracted by 46%, to 17.8k by the time lockdowns began to wind down. Why? The simple answer is that much of this behavior was conditioned by context and circumstance. Although the wider conversation has grown, many of those who populate it will have gamed due to the lack of other available leisure and social opportunities – opportunities that began to return over the latter part of summer.

i’m done gaming, i’m over it, sick of gaming for now. doing book stuff only

As some of the highest selling, most culturally-embedded and intuitive-to-use games available, titles within this category as disproportionately likely to be taken up by first-time gamers. 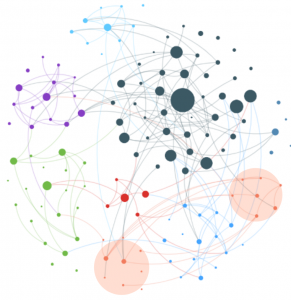 At first glance, the arc of Spanish Streaming & Esports Fanatics appeared to move in a similar direction to that of FPS & Battle Royale Esports Enthusiasts, peaking over lockdown before precipitously dropping away. As one of the nations first hit by lockdown in Europe, and one especially judicious about any outside excursions, this would seem another instance of external circumstances compelling the community to take up a short-term behavior.

Except on closer inspection we see that the community’s reduction from 10.9k to 3.6 members has occurred simultaneously to the appearance of Casual Spanish Gamers as a group, numbering 3.2k. So although total numbers have dipped, the coalescing of a more loose group linked predominately by nationality, language and some key affinities into more niche groupings, orientated around specific patterns of behavior, suggests more cohesive communities better able to sustain long-term interest and adoption of the medium.

Lockdown has accelerated the conversation around gaming, something that has both made the medium ubiquitous and opened the door onto new ways of experiencing it.

But it’s not only a one-way street: gaming and its ‘stack’ have permeated both everyday life and productivity to become much more important in everyday life.