Twitter, the company, has found its voice, which is very much in tune with Twitter, the platform.

This is a recent development.

For brands, ‘winning at Twitter’ usually requires a confident, “Twitter-native” voice, and over the years, @Twitter struggled to find it, oscillating between different strategies – from light but a tad off, to using cute animals and celebrities, likely scripted exchanges with other brands, and lots of GIFs in replies. None of those seemed to quite work, or stick, and the account’s standalone (i.e. non-replies) tweets often fell flat.

In early 2018, the account almost stopped tweeting (if not replies or product updates), before coming out guns blazing in September.

The graph above, from our analytics tool Pulsar CORE, shows total likes, replies and retweets for @Twitter between Jan 2018 and Jan 2019.

…with pitch-perfect one liners

Each of @Twitter’s hit tweets brought loads of new followers. Here’s a zoomed-in view of the month of October 2018: the larger blue bubbles represent the hit tweets, while the line charts the growth in followers (again from Pulsar CORE): 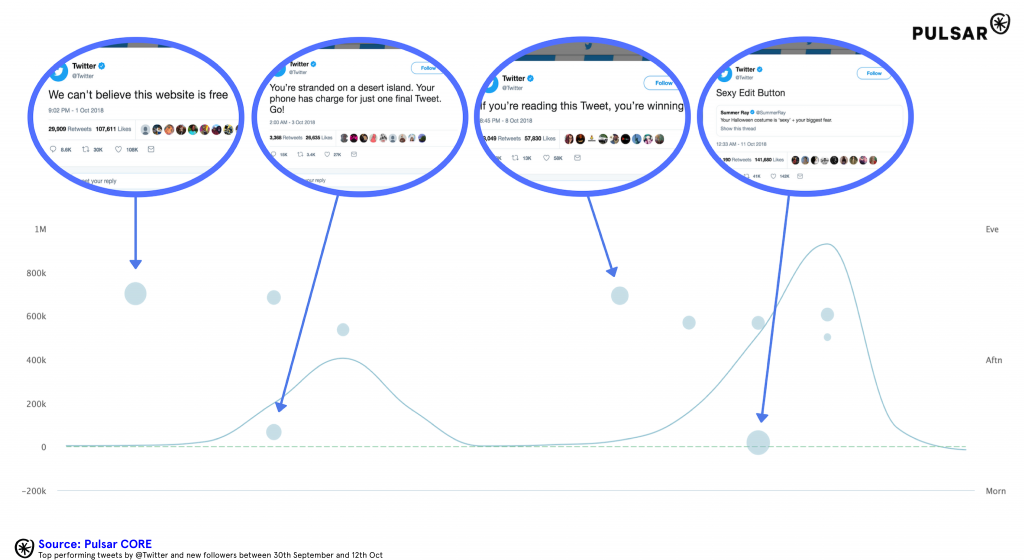 So how did this happen?

This social content strategy surely has something to do with changes in the team: the brand’s new Global Head of Social Media, Helen Lawrence, for instance relocated from Twitter’s London office to the San Francisco HQ in early 2018 and seems to be executing the change of voice that Twitter’s CMO Leslie Birland resolved to make when she joined in 2016. The team has had a spate of new hires, and more recently brought in some heavy GIF artillery.

Who's behind this? Replies are brilliant. And funny. And naughty. And natural. https://t.co/jZs7jvL3Ul

And the press is welcoming the change too.

“If you’ve been paying attention to @Twitter for the past few weeks, you’ve noticed an undeniable transformation. An account best known for posting almost comically remedial education to its user base — it was still instructing followers on how to retweet as recently as 2016 — suddenly felt a bit more alive,” said Casey Newton, a reporter at the Verge, soon after the change in strategy.

We think it started with a DM battle between @leslieberland and @jack, as many amazing things at the company do.

What about the rest of the flock?

These accounts range from country-specific, to accounts serving verticals like film or sports, to job functions within the company, like comms or recruitment – but most seem to be starting to join in on the fun.

Twitter’s comms and marketing accounts are attempting to increase engagement, but haven’t quite got the tone of voice down in the way @Twitter now has:

Over in the verticals, the music account is well aligned with the best @Twitter tweets, and benefits from engagement from artists’ fans: