One social post at a time.
Written by Victoria Gray

People are starting to care about climate change.

How do we know? Well, the conversation on Twitter is –ahem– heating up.

The reason for this comes down to 2 women, both killing it on social media.

The first is Alexandria Ocasio-Cortez, who after normalizing socialism, has imposed a debate on an ambitious Green New Deal in the US.

A Swedish 16-year-old, who talks to politicians like this: “You say you love your children above all else, and yet you are stealing their future in front of their very eyes.”

Over 6 months, 183 Instagram posts and a handful of viral videos like the one above, Greta Thunberg has become the serious, driven face of the grassroots climate change movement.

These days, the New York Times and Financial Times are profiling her, and the EU has proposed to spend billions of dollars to address climate change, right after one of her speeches.

Here’s a timeline showing, in both search interest and in Twitter mentions, how she came to dominate the growing conversation around climate change on the web:

The peaks above correlate with her most viral speeches, one of which (the last, largest one) came from the World Economic Summit in Davos, Switzerland: she arrived there by train, camped out, and protested outside until she was given the opportunity to speak her truth to power inside.

Goodnight from Davos. -18° and we’re sleeping in tents at the @arcticbasecampdavos #wef

Her journey started on a Friday last August, when she decided to go on a school strike to protest inaction against climate change.

Today, her posts engage a movement of thousands of school-age kids around the world, who congregate around her hashtags #ClimateStrike and #FridaysForFuture, skip school and take to the streets. 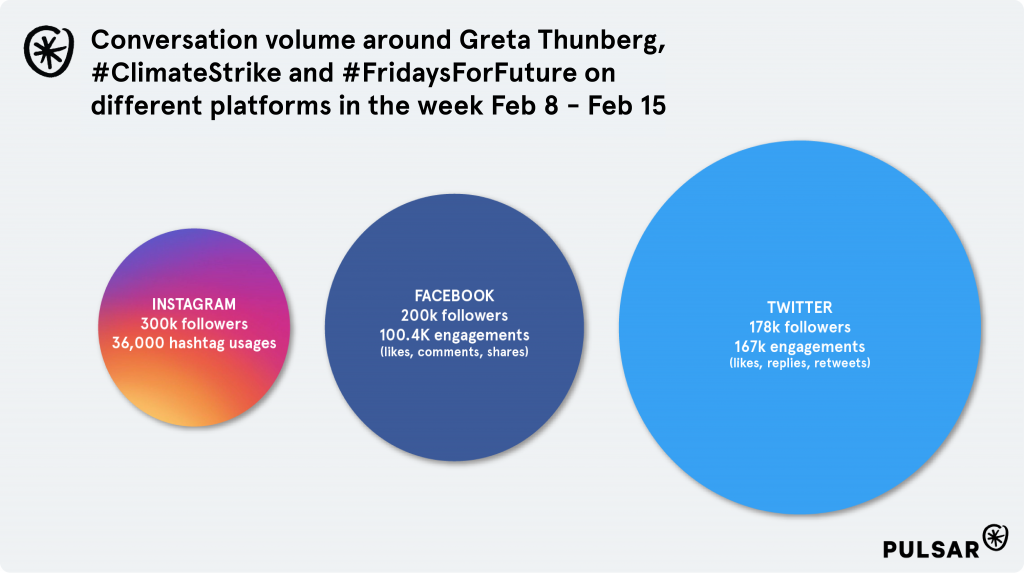 #ClimateStrike is growing weekly: a huge strike took place in the UK on February 15, but strikes are taking place everywhere in the world, with an upcoming worldwide one on March 15th.

And here’s a visualization of where #ClimateStrikes have taken place:

On Twitter, the movement’s audience is mainly made up of climate change activists and politicians, who seem to be using Greta’s recognition to boost their own agendas, whether climate-change-related or not. 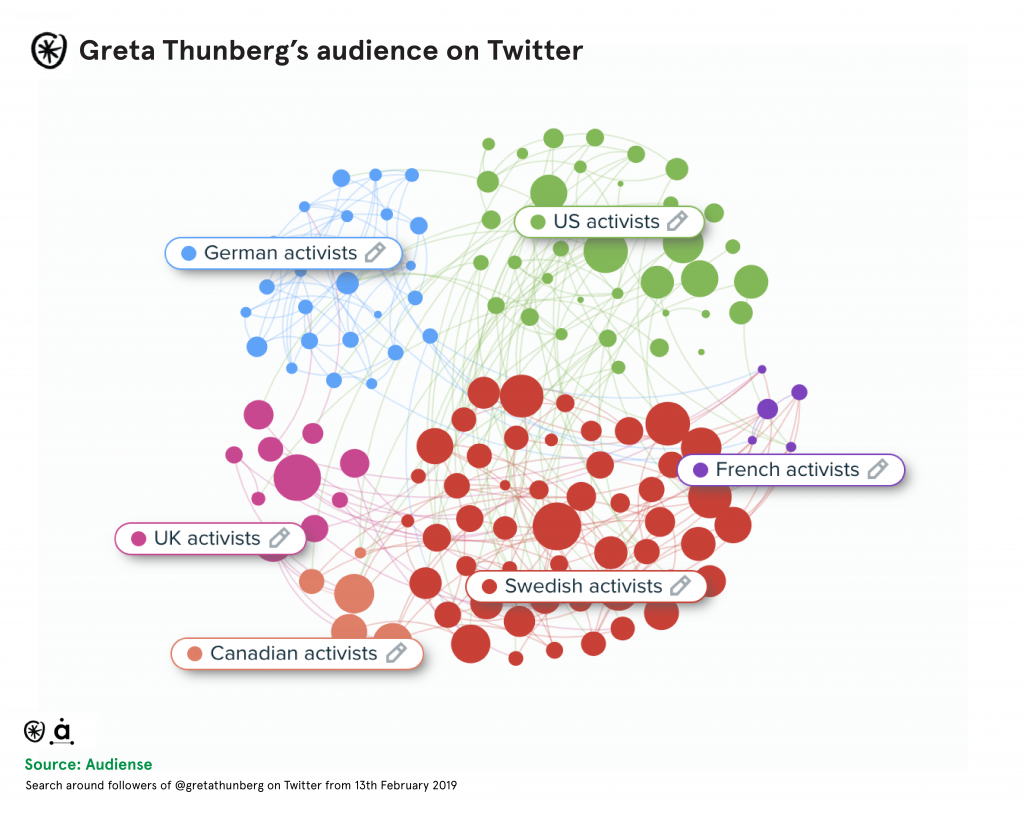 Her following is split pretty neatly into sub-communities along national lines: Swedish activists make up 30.5% of her following, while US and UK activists clock in at 23.59% and 6.25% respectively.

The UK, US and German sub-communities participating in this debate in wider bipartisan and current political debate, following leading left-leaning politicians like Kamala Harris, Caroline Lucas and Kevin Kühnert, whereas her followers in Sweden, France and Canada seem to be more grassroots-based, with unique influencers including think tank leaders, activists and researchers.

But on Instagram it’s a different story. This is where teens are posting evidence of their own Greta-inspired activism.

A post shared by Soil Destroying Capitalism (@soildestroyingcapitalism) on Feb 15, 2019 at 2:29am PST

The number of people using the hashtags #FridaysForFuture (25,000 mentions) and #ClimateStrike (15,000) on Instagram are smaller than the mentions on Twitter, but crucially, the users are directly involved in the movement: Instagram users of #ClimateStrike are the local strike chapters and is where a lot of the organizing is done.

Greta also uses her platforms to amplify others. Her Instagram Stories give recaps of each strike, and ones that shows how active the movement is in different countries.

“It’s all from Greta, yeah. It’s gone viral,” every teen involved in this protests says.

But at the local level, each chapter has its own Greta: in the UK, it’s Anna Taylor, the  founder of Student Climate Network, while in the Netherlands it’s 10 year-old Lily Platt. These are the people responsible for getting people onto the streets in each city.

Greta has said that the Parkland teens  –also known for how they used social media to amplify a deadlocked message and mobilize each other– are amongst her inspirations.

Now her influence is circling back to the United States, where just a few days ago a confrontation between a group of children activists and Democratic Senator Dianne Feinstein over her lack of support of the Green New Deal has gone viral.

This is how @SenFeinstein reacted to children asking her to support the #GreenNewDeal resolution — with smugness + disrespect.

This is a fight for our generation's survival. Her reaction is why young people desperately want new leadership in Congress. pic.twitter.com/0zAkaxruMI

Greta has Asperger’s, a developmental syndrome which she is very open about (it’s on her social media bio) and which she calls “a gift.”

“I don’t really like being in the centre of attention. I’m not used to that. All my life I have been like the invisible girl at the back that no one sees or listens to.”

Here she is, back on August 20th, on Day 1 of her #ClimateStrike.

Why memes matter: our best shot to talk about the world in the post-truth era