Recently we introduced our work with Twitter, uncovering a series of audiences on the platform who are united by their interests. We found that it is simply not enough to approach audience targeting by generic demographics, and by delving into the ways audiences group themselves, you can learn a lot about how to communicate successfully with them. Take a look at the full whitepaper for more details.

Now we’re taking a closer look at the community whose main passion is identified as TV & Film.

The TV & Film passion community is a varied audience. Although on average about 60% of this passion community are men aged 22 to 32 living in English-speaking cities such as New York, London and LA, its sub-communities cluster around genres and less around geography.

This is a contrast to most of the other passion areas whose sub communities are often focused around local interests, and indicates a progressive Twitter audience which resonates with media in a global fashion.

The four largest sub-communities in the TV&Film area make up around 30% of the total users we sampled and can be defined as: 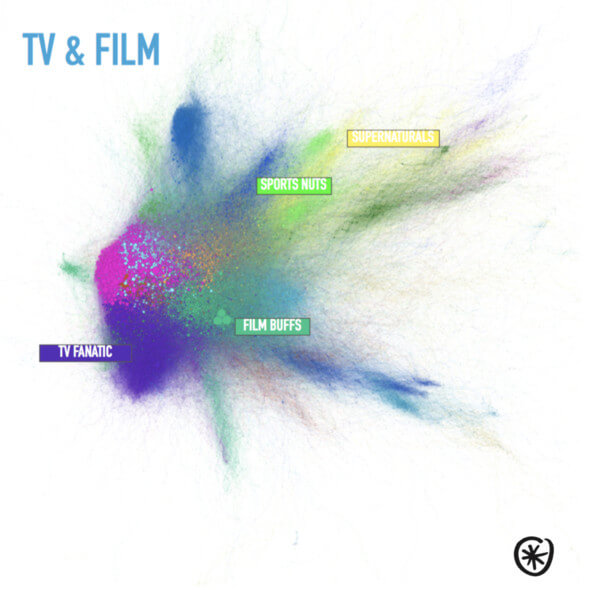 An overlay graph of the sub-groups within this Twitter community

Each sub-community is rather unique in its conversations and interests, so for brands to successfully resonate with them through strategy and advertising, it’s important to dive deeper and learn from these audiences.

For instance, the film buffs group tend to mainly talk about large movie franchises such as Star Wars, and consider iconic actors such as Tom Hanks as influencers. As well as films, they tend to enjoy comedy and big-budget TV shows, such as Game of Thrones, a natural evolution as the TV and film worlds become more and more similar. This creates an interesting cue for brands to take on how to get the film buffs’ attention.

Since the start of TV advertising, we’re used to seeing celebrities taking part in commercials, usually the biggest film actors and models. However, consumer brands seem to be utilising the rise in big-budget TV shows, and they are starting to star niche actors who are part of these shows in their campaigns. And what show is bigger than Game of Thrones at the moment?

Let’s move on to another sub-community: sports nuts. The main sports they enjoy watching are football (the American kind) and basketball. But as well as sports, they actually talk about their eating likes and dislikes – presumably while watching the game – and one brand they particularly enjoy is the Mexican chain Chipotle.

To see if Chipotle has picked up on this, we looked at some of its latest creatives and marketing activity. In recent years the brand has begun to engage the sports communities through the backing of soccer teams as well as the eSports (video game as a sport) world, by becoming the official sponsor of Optic Gaming.

However away from this activity, we’ve failed to spot any examples of creatives being generated to specifically target this demographic. This is a great example of where brands and agencies need to be a bit smarter and utilise audience intelligence to uncover new target markets.

As we can see, the demographics of this passion community are rather broad. For example, the age gap between opposite ends of the scale is 10 years. And a difference in average income is $30,000! However, their overlapping general interests include other shows, books and arts rather than specific brands or activities.

An assumption we can make is that this passion group is so ingrained with paid online streaming services or cable TV and satellite channels as well as cinema that they’re not as engaged with commercials. Brands will need to get creative in regards to what channels they try and target in this Twitter passion network. To get their attention brands must out which stars are influential for the sub-communities around the world.

Download the full Twitter Passion Networks report here. Keep checking back for more in this series about Twitter passion networks, and how brands are connecting with them