The new MacBook Pros are here, and while Apple walked back on a few controversial design choices such as the TouchBar, it doubled down on both performance and its positioning of the MacBook as the best place to do creative work.

We analyzed over 2.5 million posts mentioning MacBooks over the course of 2021 on Twitter, Facebook, TikTok, YouTube, Pinterest, Review sites and elsewhere, to understand the ways in which people interact with the defining laptop of the 21st century.

Let’s start off by looking at what people say they are using MacBooks for – and whether consumption, or creation, of media dominates. 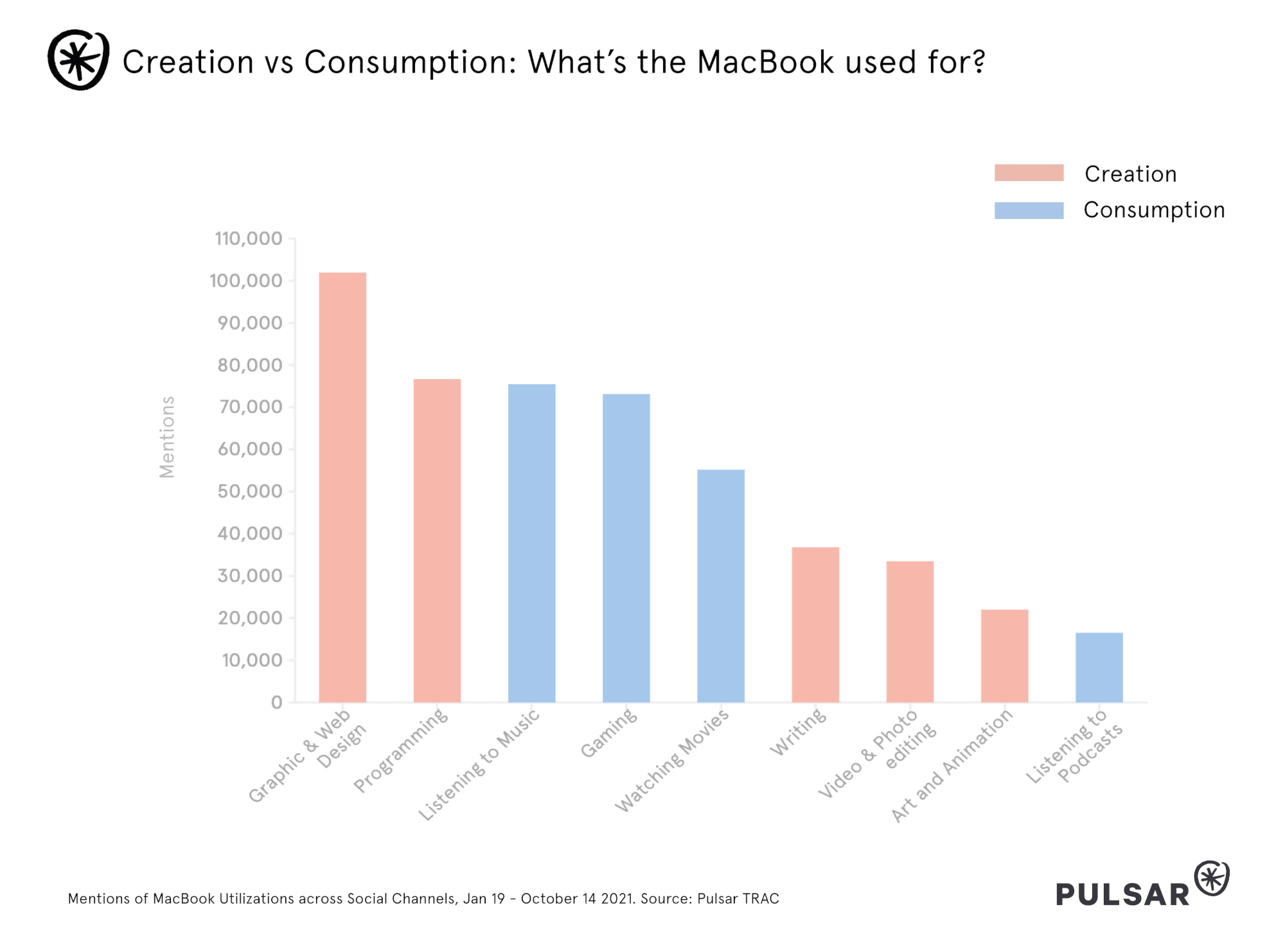 The total mentions of consumption activities (blue) are remarkably close to those of creativity (coral) – remarkable because the nature of online conversation might be expected to foreground hot takes on movies or music.

But creativity has been at the heart of Apple’s marketing strategy for decades now, and the focus Apple is putting on the performance –from the chip to battery life to display resolution–
is closely tied to how Apple imagines it being used: creating immersive games, music, software and much more.

Given this emphasis on performance, we isolated the conversation that referenced the MacBook alongside terms relating to performance, or the new M4 chip. Our audience segmentation grouped these individuals according to their shared online affinities and behaviors. 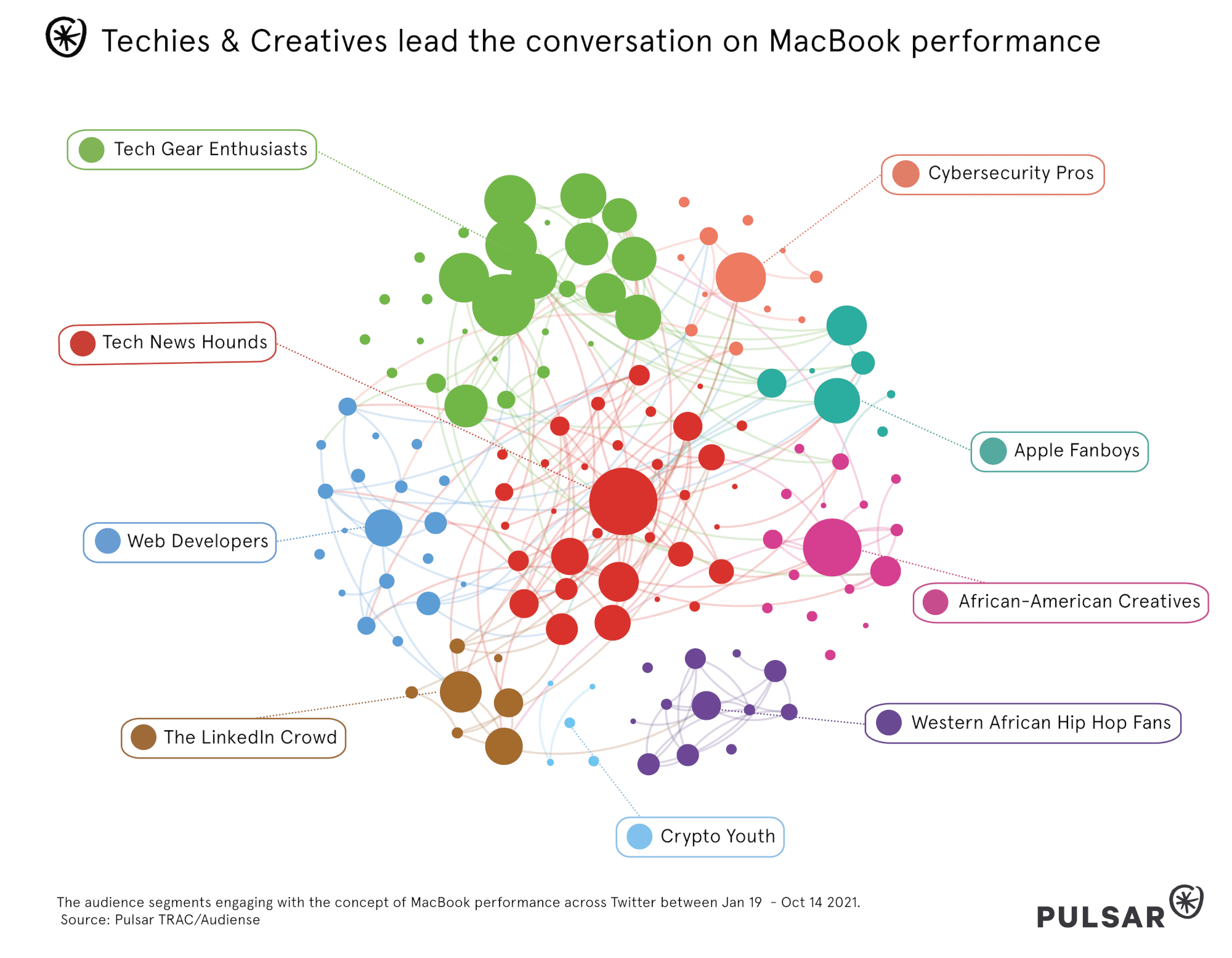 Having identified these engaged communities, we can map them to the wider MacBook conversation to discover how each community gravitates towards a specific activity. 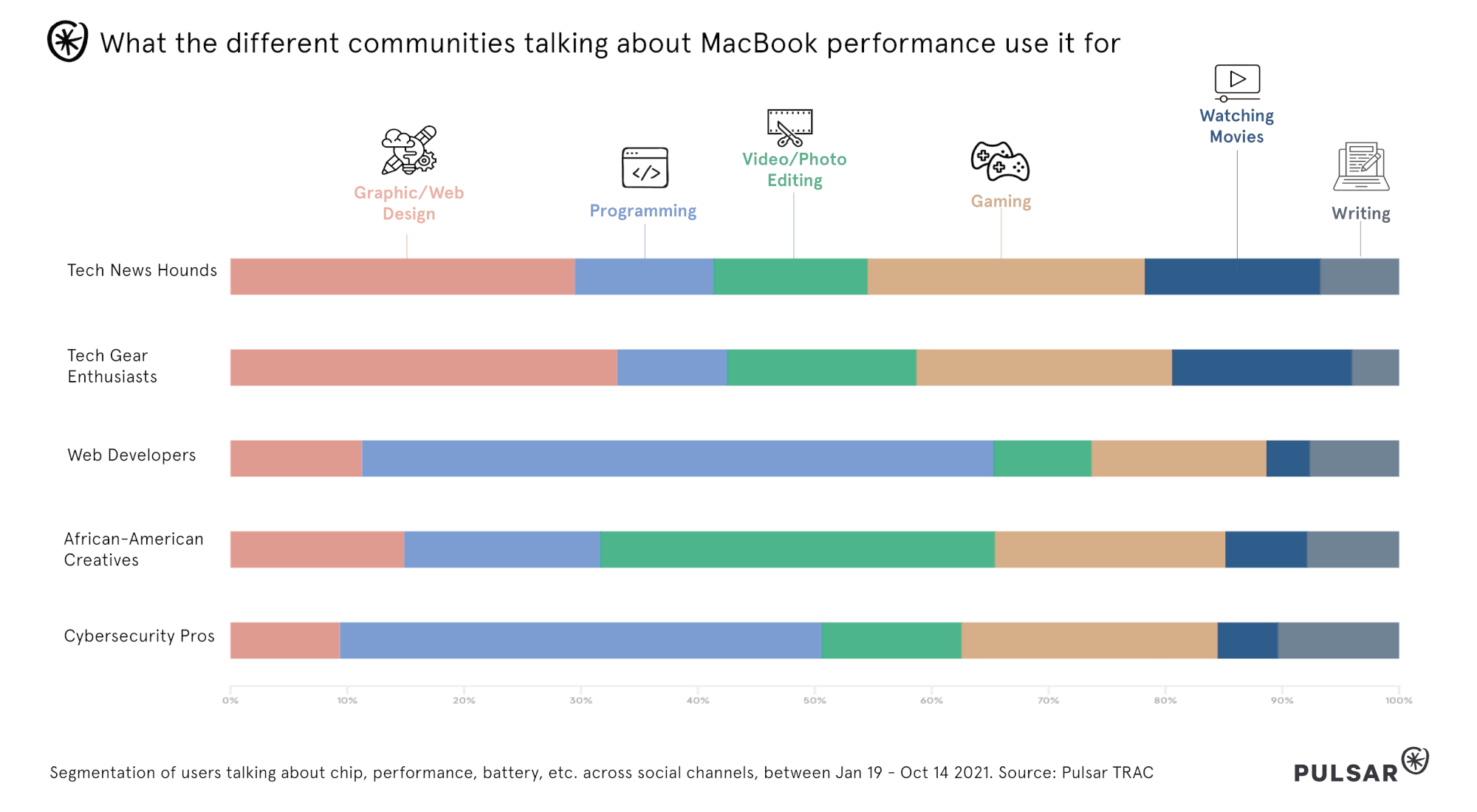 These communities typify Apple’s vision of creativity backed by high performance – making use of the MacBook’s power to create something out of nothing, whether that be programmes, web pages or graphics.

While some creative activities, such as Graphic or Web Design, retain relatively similar interest levels across all groups, others like Programming and Video/Photo Editing oscillate wildly depending on who it is doing the talking.

But what’s clear is the existence of highly engaged communities who intend on using the new MacBook in precisely the way Apple intended.

And social chatter suggests their numbers are only set to grow…

At this point, my 10yo daughter spends more time in front of her laptop than me.
10yo me would have loved that, but as a parent I have mixed feelings. That said, my old machine isn't enough for her and she'll get a m1 MacBook Air which I hope will help her unleash her creativity.

The MacBook as a personal computer

Viewing social search data, we see the Macbook’s place in public discourse leap upwards in 2008, strengthen through the 2010’s, and reach unprecedented sustained levels in the 2020s.

This growth coincided with, and accelerated, the mass ownership of laptops, which became viewed less as a tool of work and more a personal appliance akin to a TV.

Naturally, this has seen the MacBook become more closely associated with the home than the office. 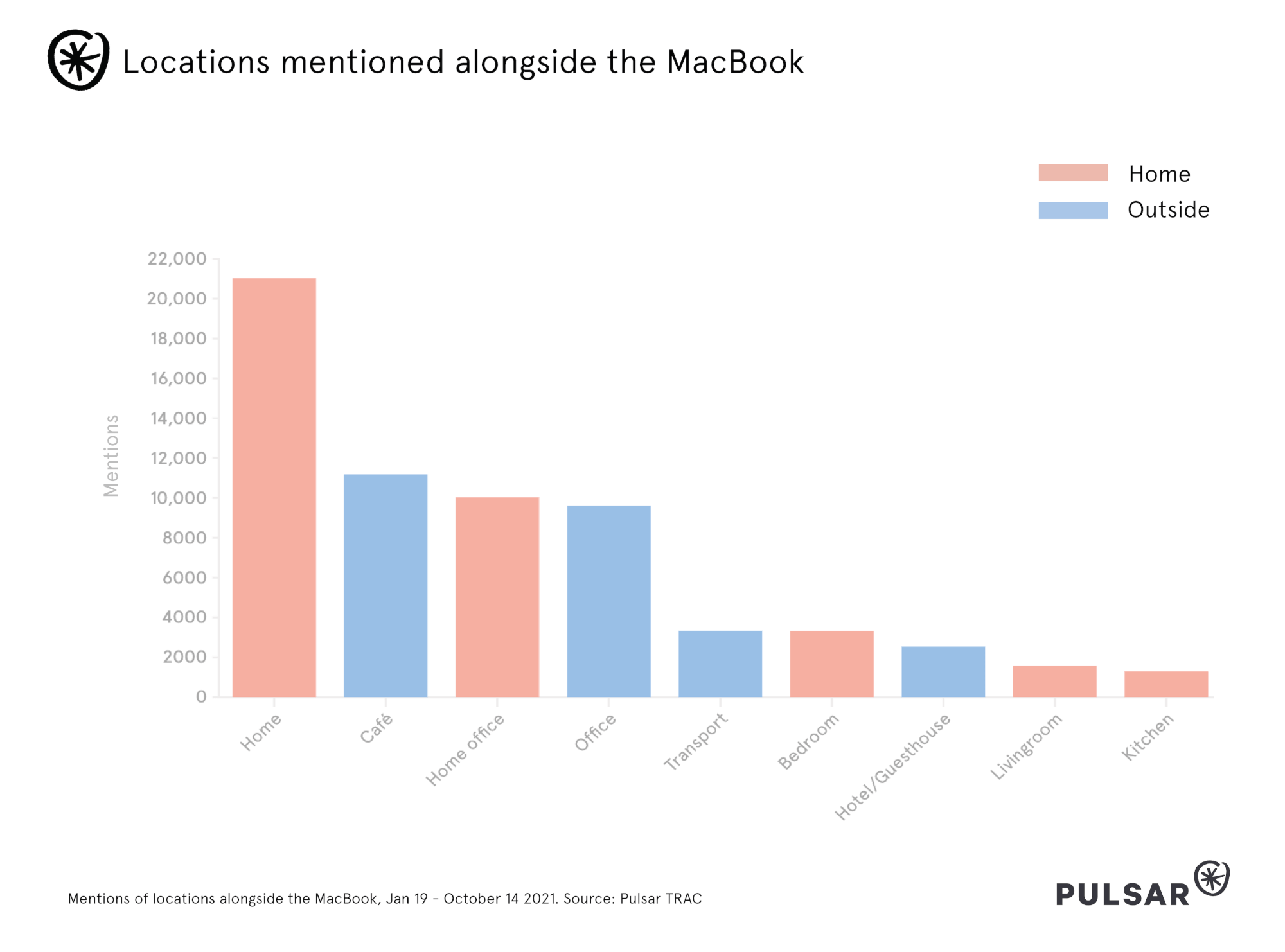 However, within this we also see significant volume attached to locations that fall outside of the office-home axis, in Transport and the Cafe (which is significantly boosted by globally shared conceptions of laptop-meets-coffee shop culture).

Sending thoughts and prayers today to everyone who works in a coffee shop but doesn’t have a MacBook.

These underline how the notion of laptop as TV is also a deeply outdated one, replaced by something more akin to laptop as phone.

For further indicators of how omnipresent the MacBook has become, we can isolate the days mentioned in conjunction with the device. 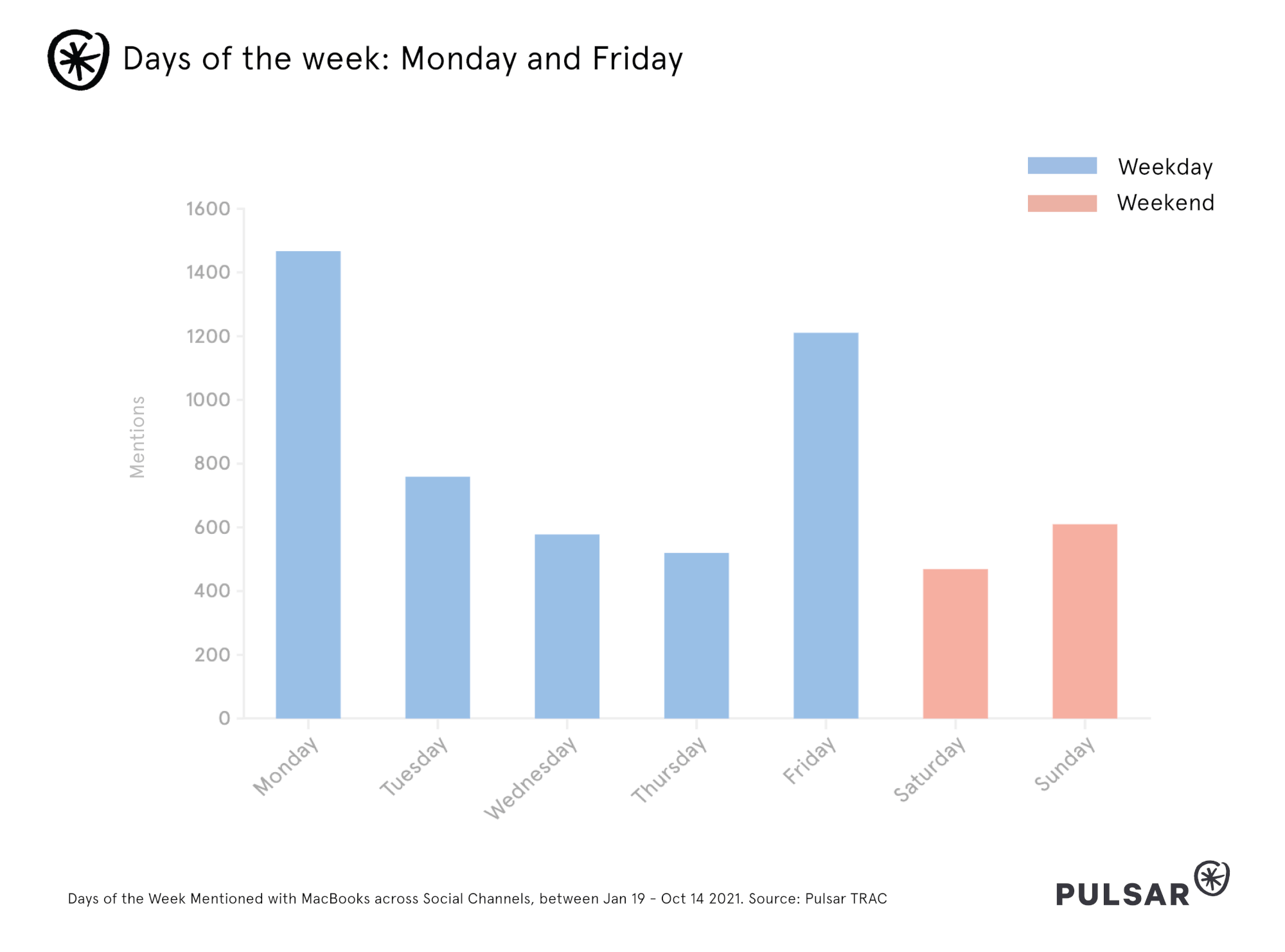 Notwithstanding a ‘Monday’ spike prompted by the new MacBook being announced on a Monday, the split across different days suggests a product that’s equal parts weekday and weekend. And it’s Friday, the gateway between the two, that draws in the most mentions beside.

View this data in conjunction with mentions of Night or Day….

… and it becomes clearer still that the MacBook is an ever-present, the ‘personal computer’ through which many filter their interactions at any time, at any location, in any context.

Part of the MacBook’s hold stems from the fact it integrates with the rest of Apple’s product stack, many of which are more immediately identifiable with strictly personal use (such as the iPhone or iWatch).

One theme that emerged within the MacBook conversation, is how the Apple ecosystem acts like a “walled garden” or a “crystal prison”. The deeper the consumer moves into the garden, the more difficult it is to find their way out.

Essentially, once consumers own one product it becomes easier to justify buying a complimentary Apple product. Even though consumers have the choice between competitors who might provide equally good, if not cheaper products, Apple’s seamless integrations between products makes daily activities more efficient and is an enticing option. Once a consumer has bought two or more products, it’s easy to see how Apple’s ecosystem might trump any single offering from a competitor.

This is reflected in the fact that even within a conversation specifically comprised of ‘MacBook’ mentions, the iPhone and iPad still accumulate more individual mentions than the MacBook Air. 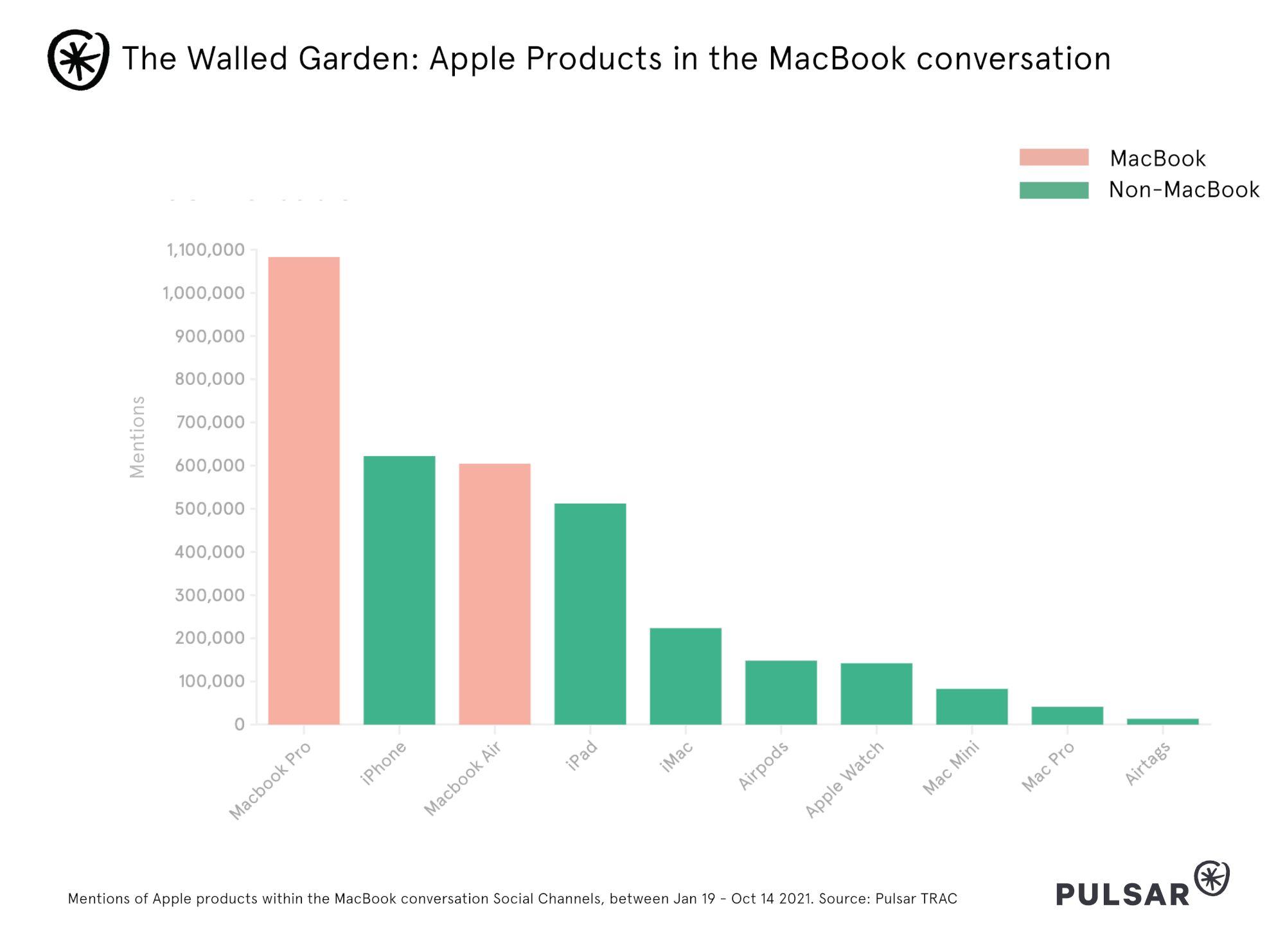 That same concept of a ‘walled garden’ can be applied to the applications created by Apple for use on the MacBook.

In some cases it appears a walled garden that various occupants are only too happy to escape.

I really like Outlook for Mac. I’ve always been an all-Apple app person, but here lately I have hated the native Mail app. It’s just the worst lately.

But, comparing mentions of Apple’s applications with equivalents either owned by or linked to Google and Microsoft (Cloud, Spreadsheet, Music), and we see how the company wins the battle for various elements of their user’s productive or leisure behavior – and loses others.

The enduring popularity of Microsoft Office, and the ubiquity of the Microsoft-aligned Spotify, help beat the brand into second place on its own device. Google products, meanwhile, lag some distance behind.

We can also leverage this dataset to give a better understanding of how individuals approach buying a MacBook.

We’ve already underlined the importance of performance to the MacBook conversation in 2021, but design, cost and quality all play an important part in public perception – and individual calculations.

By overlaying syntax that suggest a will, or intent to purchase, a want to purchase, or having already purchased, we can visualise the attributes that matter most at different stages of the purchase journey. 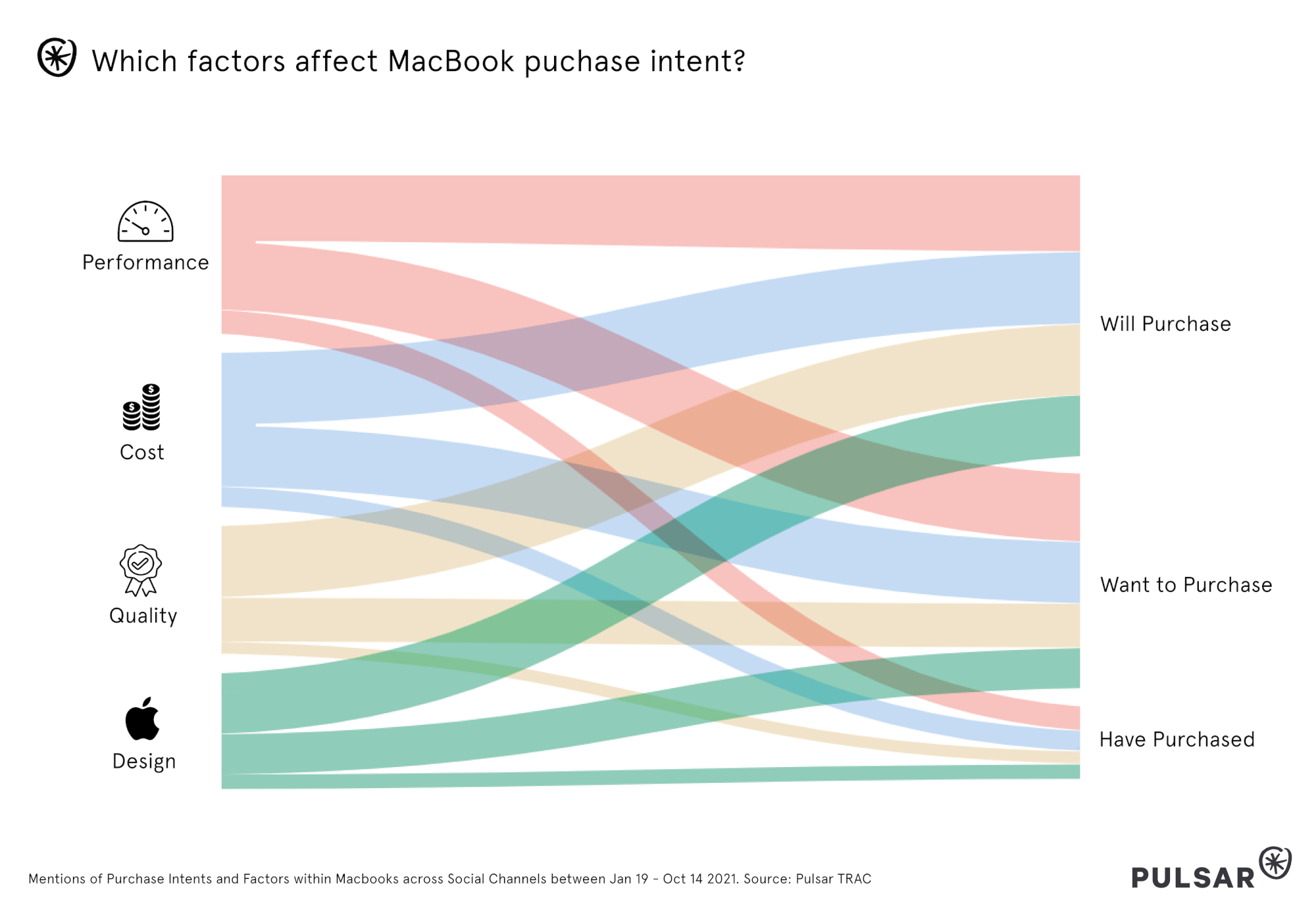 Performance narrowly beats out cost in both ‘Will Purchase’ and ‘Want to Purchase’. And, given the MacBook’s new emphasis on performance, it’s unsurprising that its release corresponded with the year’s sharpest uplift in comments suggesting an imminent intent to buy.

Counterintuitively, the want or desire to purchase did not similarly spike, suggesting that while some consumers appear to have skipped a step of the consumer journey in their eagerness, others haven’t been impacted in quite the same way, and might take a little longer to fully embrace the technological possibilities of the new MacBook.