How local concerns are evolving during the pandemic

We tracked 2.5 million posts to understand the shifting perspectives around the 'local'

The global pandemic has changed people’s relationship to their surroundings.

For almost a year now, the vast majority of the population in most countries has been spending more time in their own cities, their own neighborhoods, and immediate surroundings. What’s around us matters much more than before.

Here’s mentions of “locally” over the course of the year on Twitter – a large spike in March, followed by a sustained increase that held at roughly double pre-pandemic levels.

We tracked 2.5 million posts from the first week of 2021 relating to the ‘local’ topic, to understand the new perspective on the local, and what it means. Within this, we identified the word ‘locally’ as the most reliable gauge of perspectives, behaviors and intent.

Local concerns are of course topped by the number of Covid cases (32.6%) but are followed by a substantial number of posts revolving around news, shopping and sports – suggesting interest in local activities is strong even as some of them may be paused until further notice. 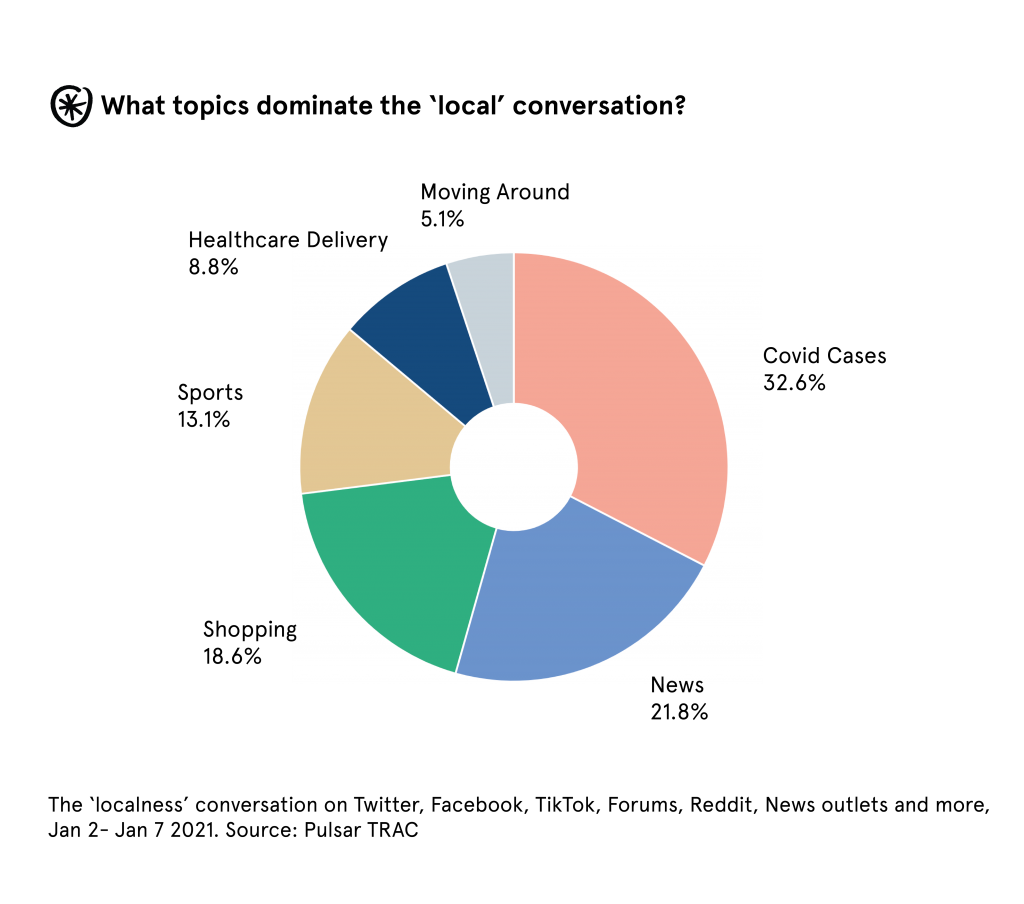 Concern for local businesses, while not a dominant factor in this conversation, pops up consistently in many different shapes or forms, with users across platforms encouraging support and highlighting initiatives.

My local indie cinema has been in business for 35 years. They are auctioning off decades worth of movie posters to stay open during COVID-19 from movies

Food in particular is the one sector where this kind of raising awareness is most prevalent – both at the level of local institutions, private citizens, and businesses themselves.

During the past year, the restaurant and foodservice industry has been hit hard by pandemic regulations. Consider supporting a local restaurant through delivery or pickup tonight. #OceansideCA #Oceanside #stepuptothetable #ShopLocal #eatlocal pic.twitter.com/90w06uAlKS

.. with farmers markets highlighting locally sourced ingredients and an open-air setup which now becomes appealing – even in winter.

Local food concerns extend from the business side to consumption, of course. The two food options most people have access to are equally top-of-mind, with mentions of delivery from local restaurants just slightly lower in volume than those of grocery stores supermarkets. 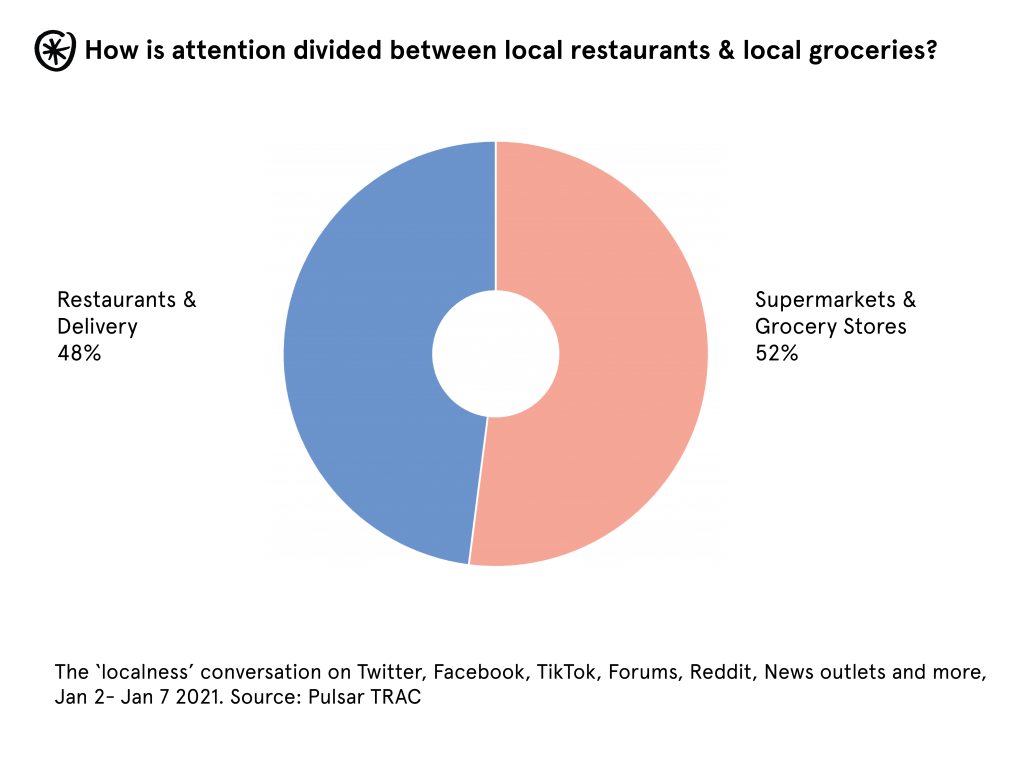 The most commonly associated emotion with living and engaging ‘locally’ was one of joy. So dialled into the occurrence of this emotion within the UK, segmenting the audience behind those posts to understand who is approaching this topic with a more upbeat perspective. 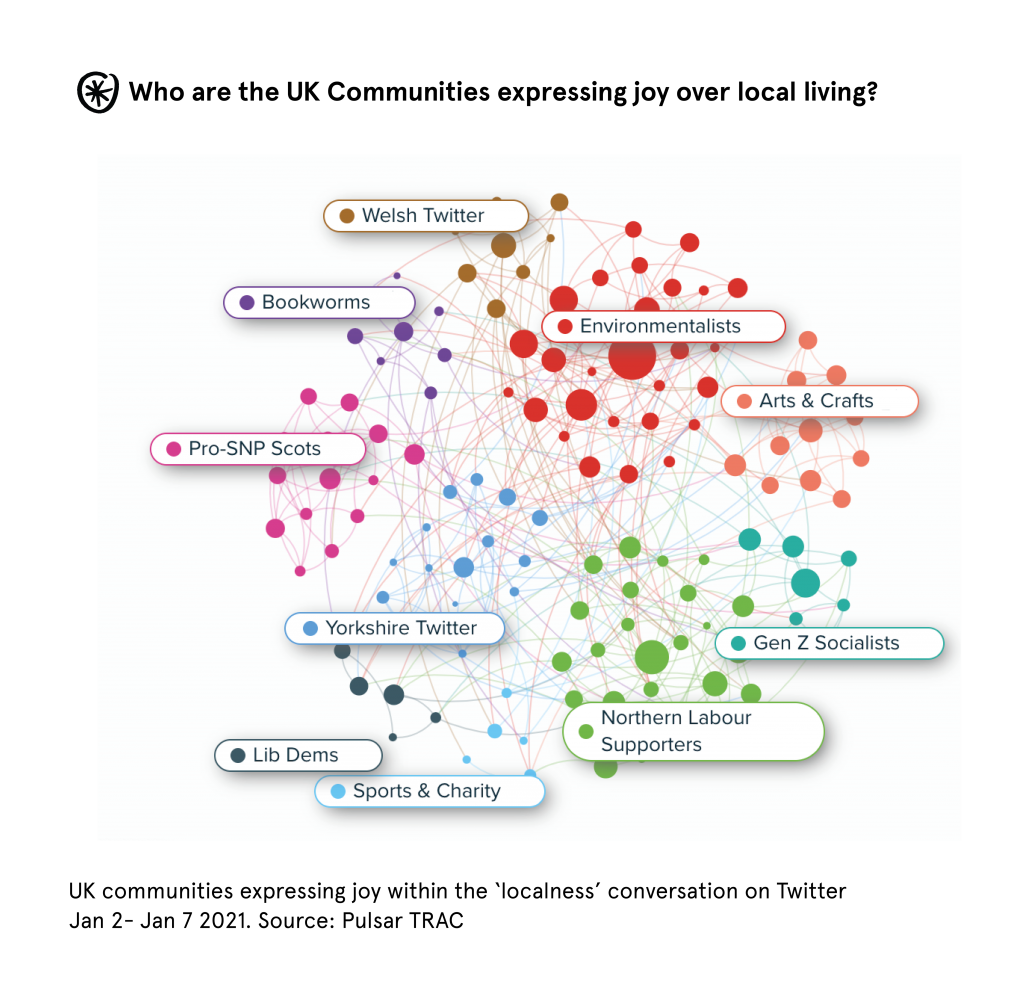 The age breakdown of the largest communities expressing joy in the local conversation points to a young and typically liberal audience.

Not only does this upend stereotypes about local, communal living, it also is indicative of new generations coming to a – admittedly rather forced – appreciation of what is around them: institutions, options, businesses and food.

I’m the same, I live quite rural and the local farmers really saved me in the first lockdown, time to really support local.

The shift to local is not affecting only businesses and individuals, of course. The necessity to curtail movement has also had a knock-on effect on policy ideas for large cities which are still engines for the economy – as the idea of the 15-minute city found a second wind.

Dubbed “la ville du quart d’heure” or 15-minute city on its inception in Paris, the idea of reconfiguring  an urban landscape in which all daily necessities are within a quarter hour walk or cycle is showing signs of continued audience interest.

Attitudes to the Covid vaccine across US cities

How local concerns are evolving during the pandemic