Which audiences are talking about the new IPCC climate report?

The communities reacting to the UN's climate change report

The new climate change report by the IPCC – the UN body dedicated to climate change – was published a few days ago, the work of hundreds of scientists trying to assess the state of our planet and ecosystem.

The new IPCC report contains no real surprises. It confirms what we already know from thousands previous studies and reports – that we are in an emergency. It’s a solid (but cautious) summary of the current best available science. 1/2

But while the voices of climate activists are growing tired and weary from decades of inaction, many seem to see this “official” and “scientific” report as one last opportunity to catalyze public opinion, and marshal the urgency and resources needed for radical change in how humans conduct themselves on this planet.

Conversation around the report peaked sharply on the day of its announcement. In fact, the number of posts continued to grow into the following day, but engagement was at its highest on August 9, driven in part by posts from Greta Thunberg, Boris Johnson and John Kerry.

As the social buzz begins to slow down, interest in the report continued to grow and sustain, a phenomenon we call “The Twin Peaks of Attention”. In essence, a substantial spike in public conversation in a topic visible through social data will cause, a few days later, a spike in a more “private” interest, visible through search data.

Search interest is not just the IPCC and the report, but also around climate change as a topic in general, suggesting news and conversation about the report is catalyzing more interest in the topic at large. 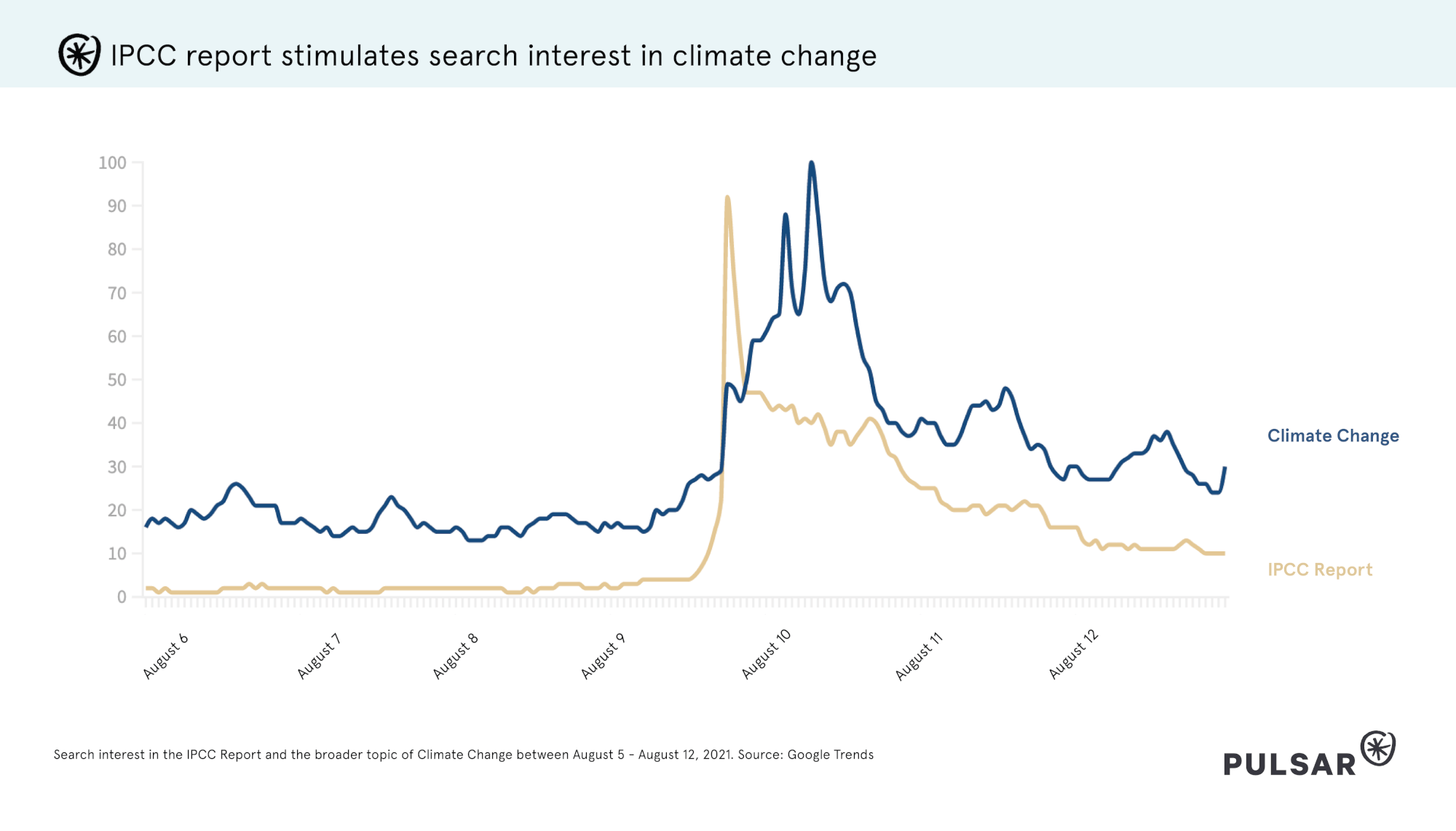 While the posts of Greta Thunberg attract the most engagement, the top posts are otherwise issued almost entirely by political figures, particularly (although not exclusively) those on the left.

The presence of Thunberg also helps illustrate the international nature of the conversation, with Dutch, German, Spanish and Korean posts all featuring amongst the most engaged.

Any sense of global coming-together, however, is punctured by the popularity of this post, among others.

Why didn't the UN Climate Report call out China for emitting more greenhouse gas emissions than all of the world’s developed nations combined?

But who are the people involved in this conversation?

Upon initial analysis, it seems like a news-driven conversation segregated into smaller language and national-defined boundaries, reflecting just how much amplification the release of this report has received within national news media.

Limiting the search to English-language posts, to hone in on shared affinities rather than shared language, helps understand the types of people to engage with the report.

It suggests a deeply politicised conversation, but the predictability of the segments, with liberal metropolitans and climate activists set against male conservatives, is also indicative of a conversation that has failed to bring in wider interest beyond the same old combatants. 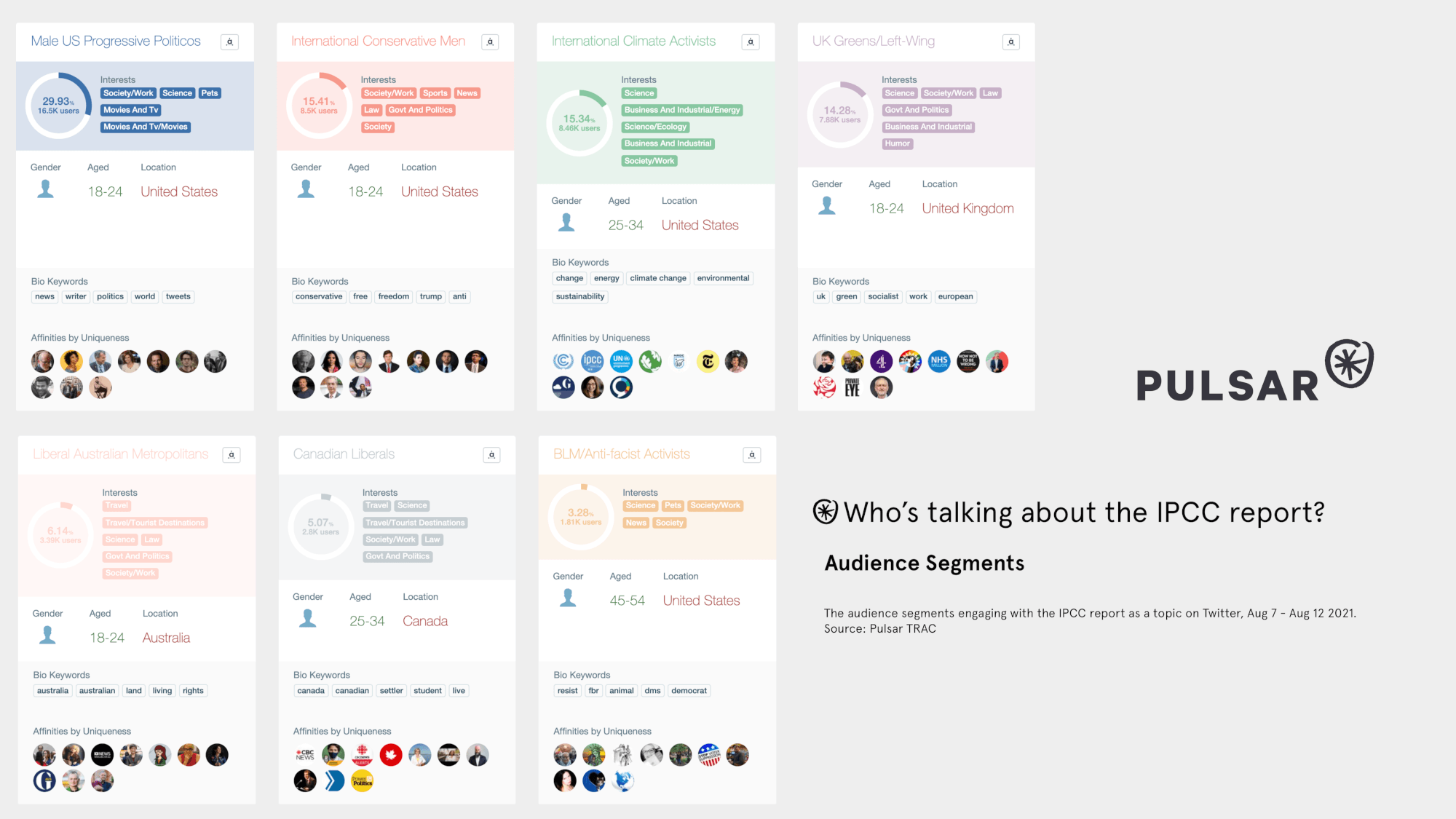 This being a highly-anticipated report relating to a global public policy conversation, it’s not surprising to discover that online, this is a conversation that is highly driven by news media and institutional voices.

The most dominant news media voice in this conversation is the Guardian’s, with links to its site making up more than twice as many as any other publication. Other influential voices include NYT, BBC, Washington Post and NHK, Japan’s public broadcaster.

Despite the massive surge in interest that the IPCC report generated, however, and despite the terrifying imminency of the prognostications, contextualising the the topic alongside other leading news stories proves how hard it is for climate issues to maximise attention. 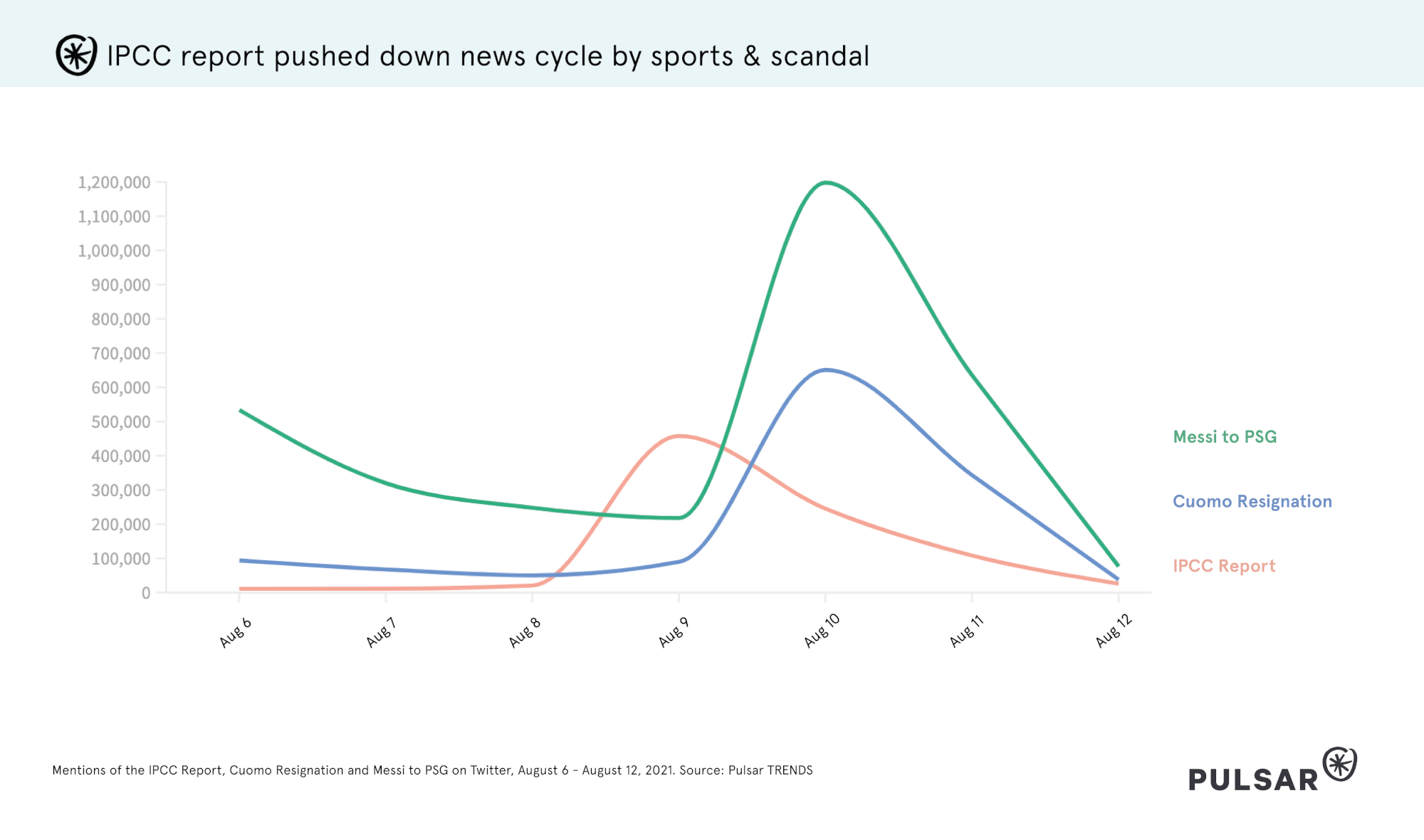 The report generated less attention than the resignation of New York Governor Andrew Cuomo, and also the transfer of Lionel Messi to Paris Saint-Germain F.C.

If there is cause for hope, however, then it lies in the resurgent interest towards climate change as a topic. The IPCC report may fade quickly from the news cycle, but if it shifts the dial on individual and public perceptions, then much-needed change becomes a little bit closer.

The audiences behind Seaspiracy