Monday may be cyber, and Friday black, but the charity sector has claimed Tuesday for its own. Over the past decade, Giving Tuesday has become steadily more entrenched in the period following Thanksgiving, an alternative to the commercialism of both Cyber Monday and Black Friday.

With distancing measures meaning a dip in in-person fundraising just as many needed it the most, the move towards online campaigns and hashtag activism has been accelerated this year. From November 30th to December 4th, there were upwards of 600k mentions of Giving Tuesday.

So how did that engagement translate into patterns of behaviour?

Comparing social data to search volumes, we can see that a pronounced peak on December 1 was followed by an upswing in search data, as the wider world belatedly caught up. An indication, perhaps, that the already popular movement still has the potential for massive expansion. 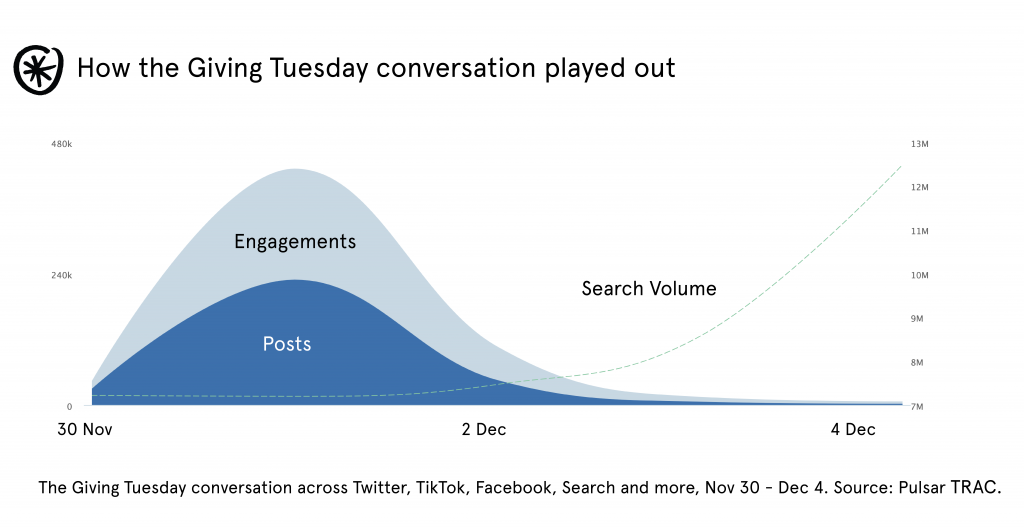 That initial surge across social channels, however, contained a diverse array of different behaviours, as evidenced from the disparity between top-performing posts. 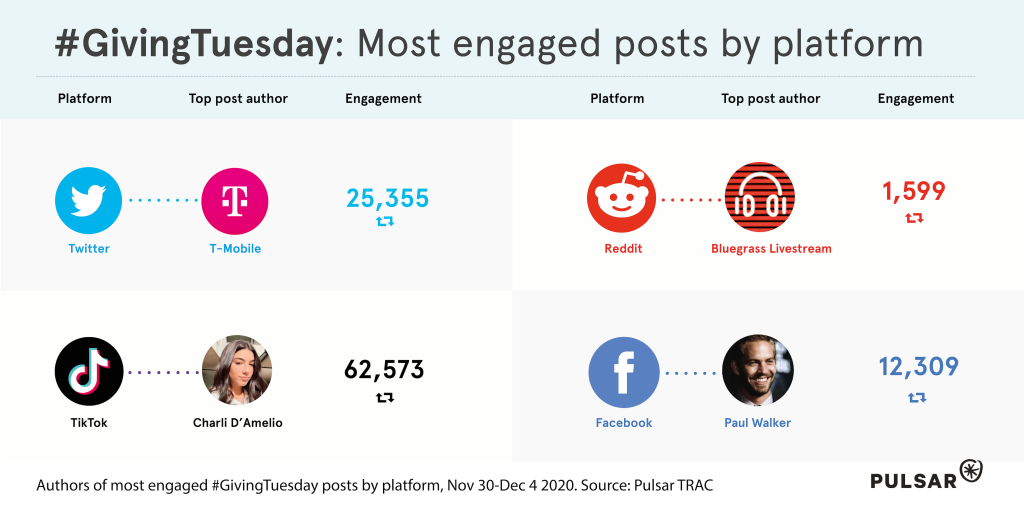 Yes, ‘Giving Tuesday Rockabilly Bluegrass Bass Slappin Sea Shanty Kazoo Hour of Harmonica and Pepsi’ emerged as the most visible piece of content across Reddit. A livestream on Reddit Public Access Network, it contrasts with the sincere appeals made across the other major channels, from authors as diverse as telecoms giant T-Mobile to Charli D’Amelio, TikTokker with a 100-million-plus followers.

Elsewhere, we see White House denizens past and present embrace the day’s message….

We started the @ObamaFoundation to help a new generation build a better tomorrow. And many of them already are, stepping up through the pandemic and protests to demand real change.

On Giving Tuesday, I'm asking you to invest in them: https://t.co/EmEqSufrBP pic.twitter.com/DqXKqypaU7

… while also noting US pop star Halsey’s prominence on Russian social channel VK, and a confectionary company’s somewhat tenuous use of the hashtag to attain mass visibility on Instagram.

In amongst this, we use also prolific use of hashtags.

Away from the primary #GivingTuesday hashtag, which accounted for almost 40k mentions, we see numerous instances in which longstanding hashtags, such as #worldaidsday or #cybermonday, are leant either fresh impetus or context by association. 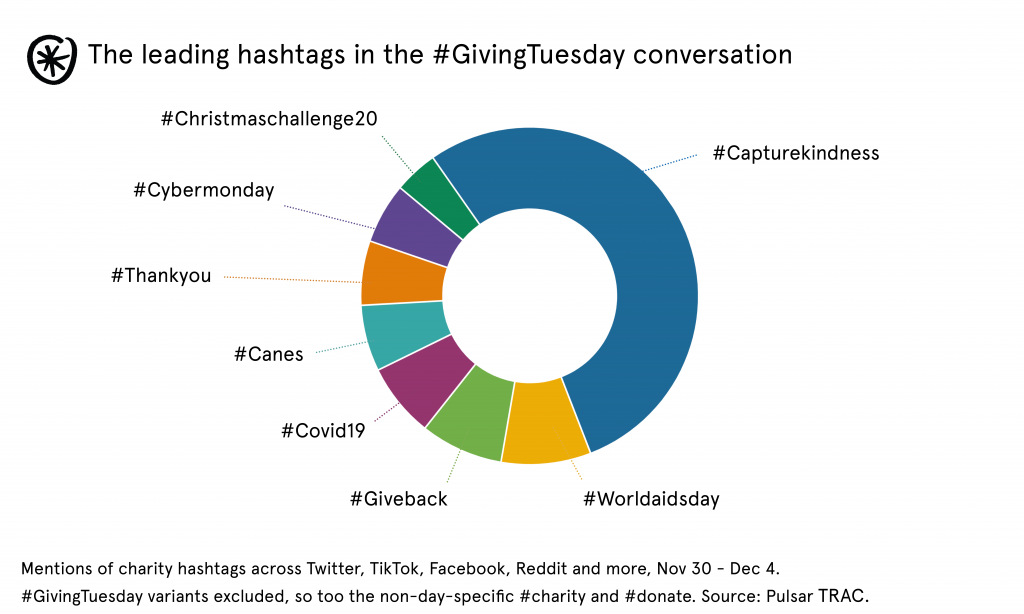 Across the day, many of these hashtags were used in conjunction with posts about children’s charities.

And it was in this conversation, touching specifically on fundraising for society’s youngest members, where we saw especially high engagement. If we zoom in on the conversation’s make-up, several clear communities emerge as participants. 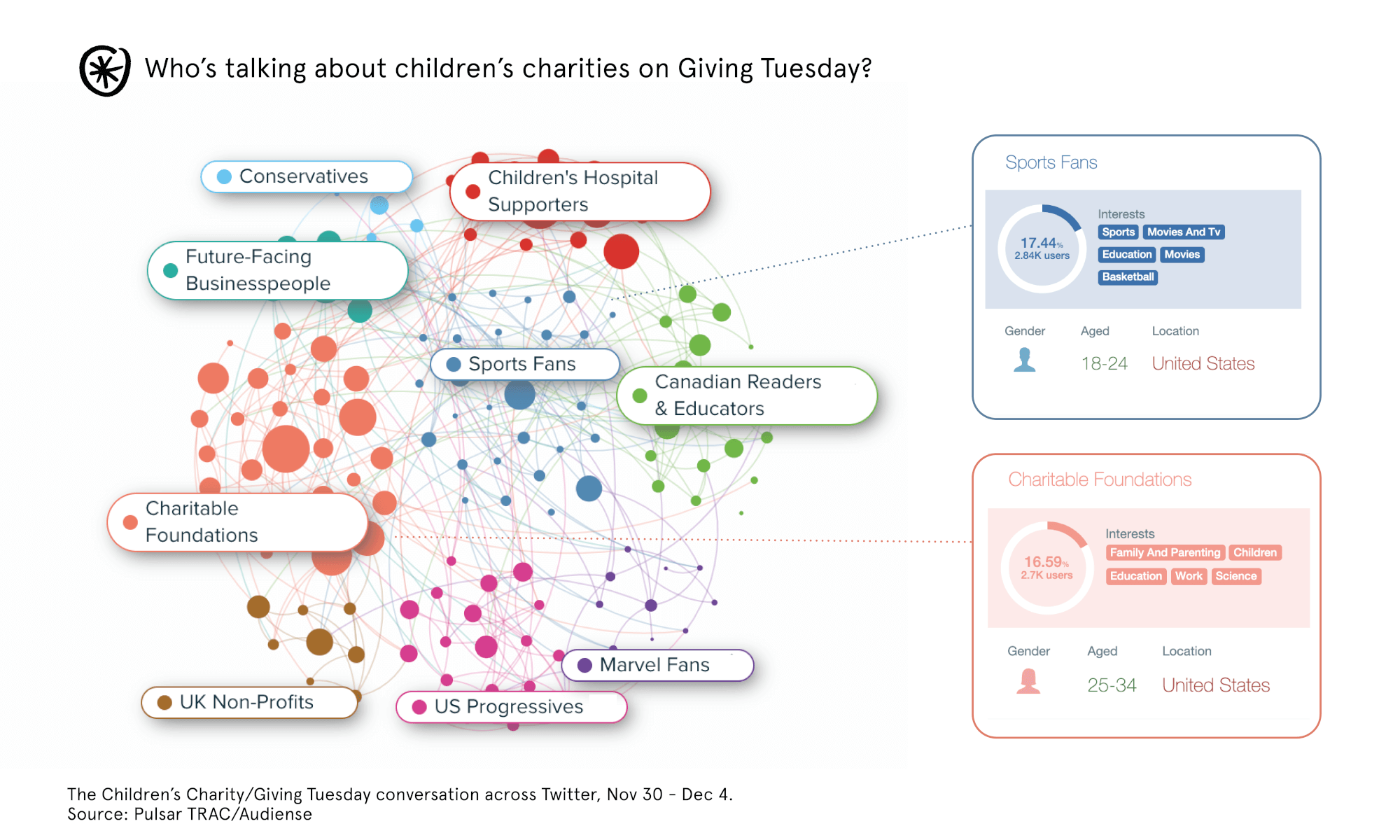 The conversation is unsurprisingly US focused, excepting some activity in the UK and Canada. Sports Fans, the largest segment, are a marginally more male group who display an affinity for outlets such as ESPN and The Bleacher Report. 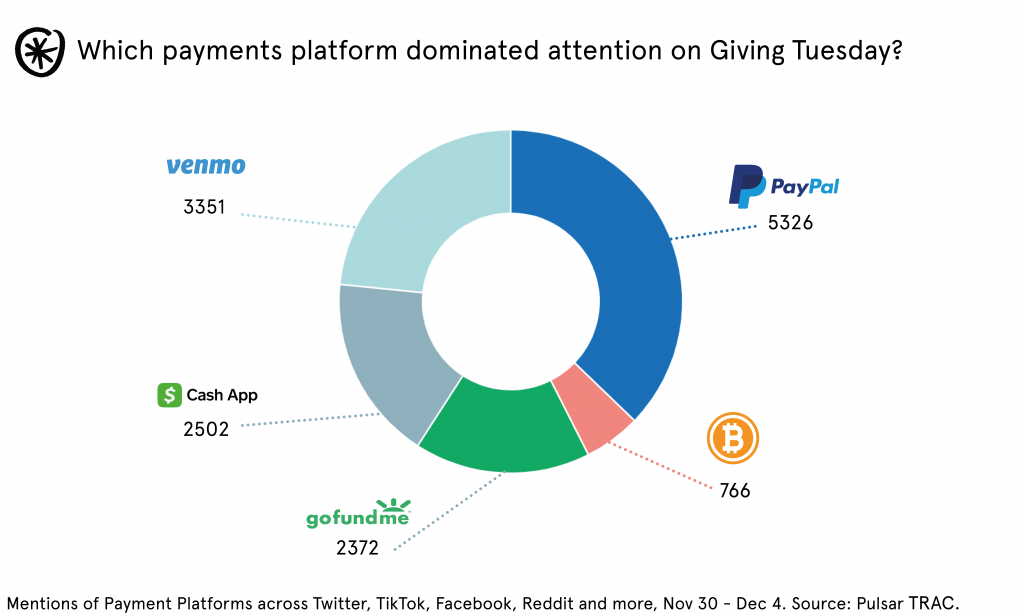 To add another layer of analysis. we can also see how interest in the largest platforms corresponds to mentions of various charitable causes. 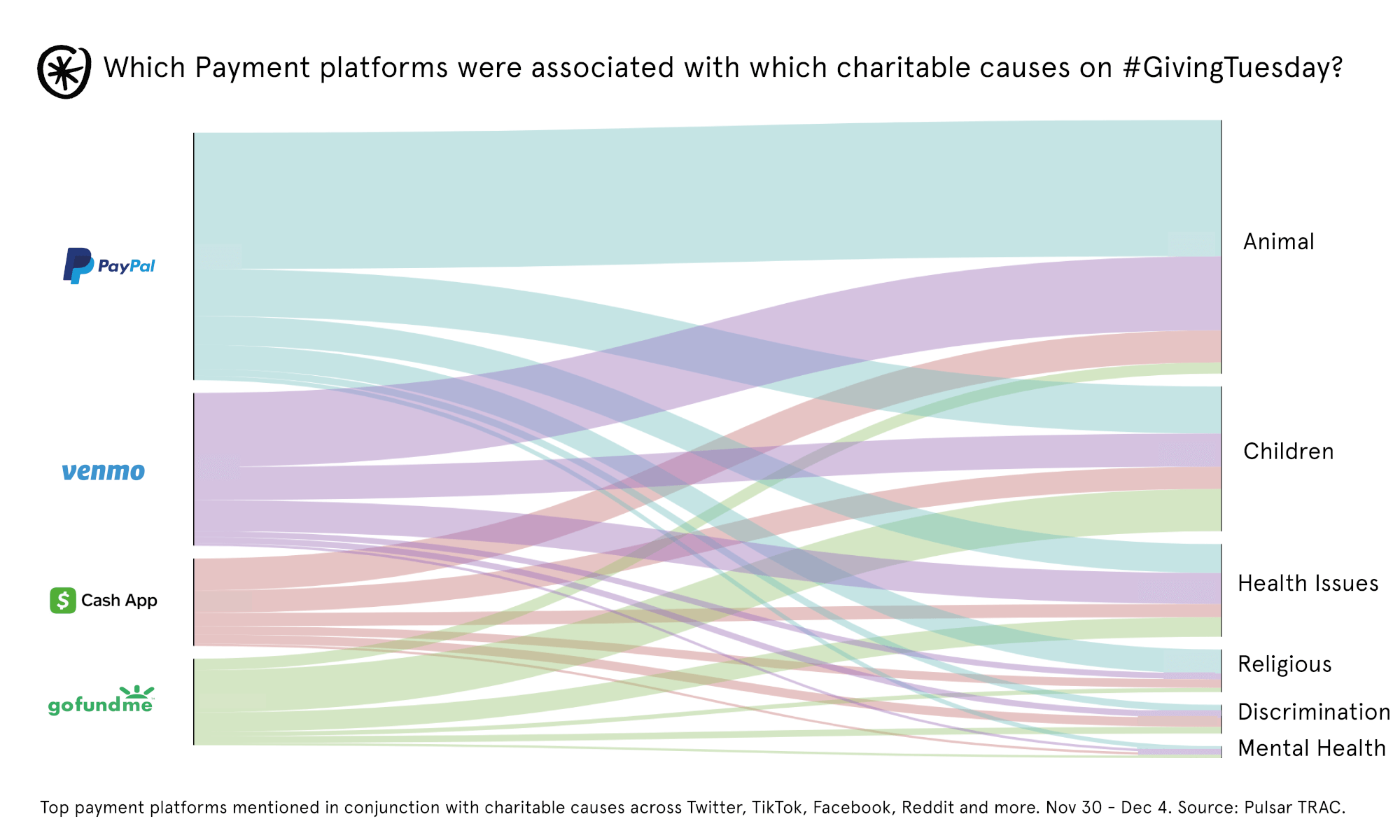 In addition to signifying the over-representation of children’s and animal charities, we see the dominance of non-charity-specific platforms like PayPal, Venmo and Cash App.

Want to take a look at this dataset and how it has evolved, and learn more on our methodology? Book a demo with one of our specialists today👇