Analysing the social conversation around GivingTuesday2021

Pulsar have partnered with global generosity movement GivingTuesday to better understand the different ways in which people give, from the causes most spoken about to the audiences who engage with topics.

On GivingTuesday 2021, this partnership led to Pulsar collaborating on a live dashboard, hosted on the movement’s homepage, which provided hourly updates on keywords, hashtags, causes and types of appeal.

Looking back on the data generated over the course of the day, we see the continuation of several trends spotted in previous years, particularly in the case of language choices.

Empowerment has become an increasingly important CTA, or Call to Action, over successive years. This trend is continued within the 2021 GivingTuesday conversation, and appears driven in large part by posts about both children and animals.

At the same time, we also see the language of empowerment used frequently in reference to charity goals, not just as means of generating donations and engagement:

When we take a closer look at how different Calls to Action map to different causes, meanwhile, a couple of trends begin to emerge.

First of all, we can establish which causes dominated discussion on GivingTuesday 2021.

Comparing the split between causes to previous Pulsar research into Charity and giving, it appears that GivingTuesday 2021 slightly over-indexed for Animal Welfare, and did so quite spectacularly for Science & Education.

If we want to explore why education in particular attracted so many posts, we can look at some of the most engaged posts within the subset of the overall conversation: posthumous accounts that emphasize educating future generations.

"I believe the responsibility for tomorrow is in our hands today." #MayaAngelou

There are so many ways to express gratitude this #GivingTuesday. To learn more about how we impact education, healthcare, and community-based initiatives, visit: https://t.co/nQZYZ1oMFh pic.twitter.com/ORMojXXoAR

We can can then map these two filters against one another, to ascertain how the most-mentioned-causes attract different types of discussion: 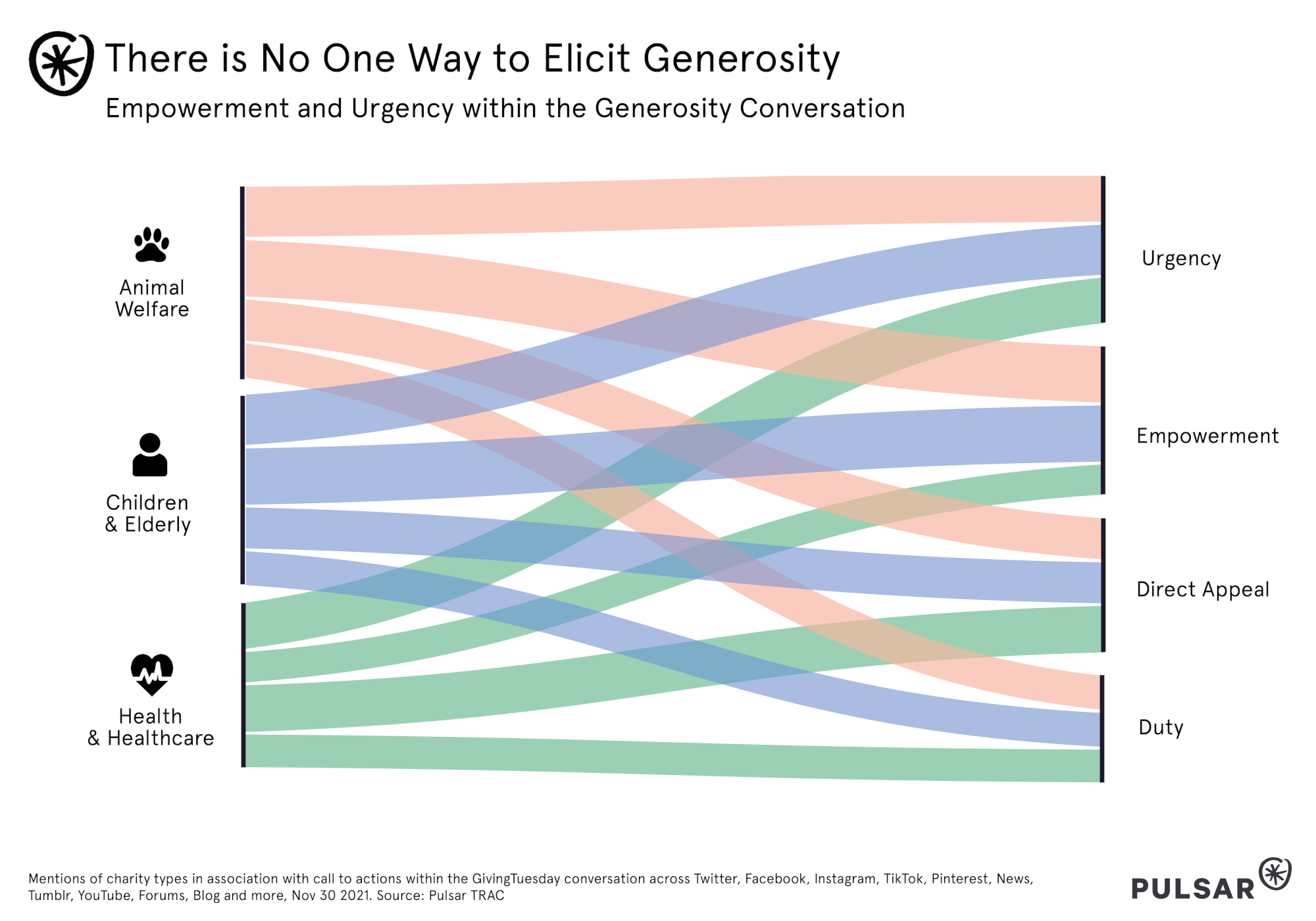 No one cause has a monopoly on any one method – charities and individuals aligned to a particular cause tend to use a variety of different language types.

Within this, however, Health and Healthcare over-indexes for direct appeals, whereas Animal Welfare and Children & Elderly tends to empower the reader.

Taking a step back to look beyond the year in question, we can also track monthly mentions of generosity over a series of years:

While overt Twitter mentions of GivingTuesday are slightly down in 2021, the wider donation and generosity conversations within November & December are actually higher than ever, suggesting that the spirit of giving engendered by the movement is only on the up.

And so, can we delve a little deeper into that GivingTuesday-specific tier of the column, to highlight aspects of the conversation unique to the movement?

From platform to platform, there is huge variance in the types of post and content that generate engagement. Twitter’s top few posts include both politicians and novelty cat accounts, while TikTok skews, unsurprisingly, towards posters in their early twenties and teens. 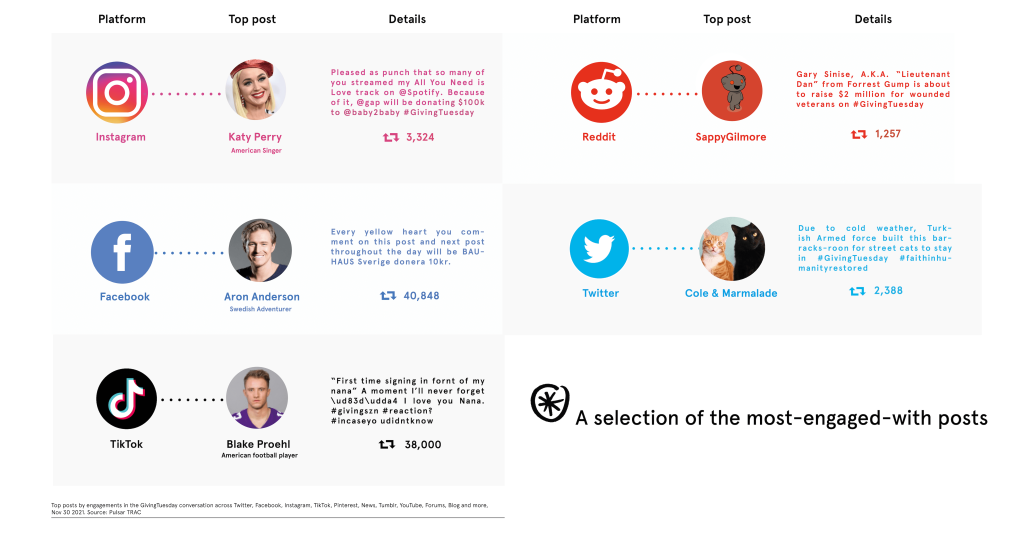 One observation is that, while most posts involve links to donate and feature appeals on the part of the poster, #GivingTuesday and #GivingSZN are also being co-opted for use within conversations that talk more generally about kindness and interpersonal connection.

A notable addition to this chart is #cryptogivingtuesday, a nascent trend driven by influential figures within the crypto space.

Another, that did not this year gain enough traction to make the most-used hashtag list but nonetheless grew in online presence, is #GamingTuesday – a streamer-centric initiative that appears largely aligned with children’s charities.

As far as keywords are concerned, it’s striking that ‘support’ is the second-most-mentioned keyword, more than help, donation or Tuesday. Aside from anything else, there’s a sense that the word affords more dignity to the group or cause in question. In some ways, this corresponds to the rise in empowerment as a CTA; in both cases a positive contextualisation of both giver and recipient appears the goal.

Finally, who is it who’s taking part in these conversations? 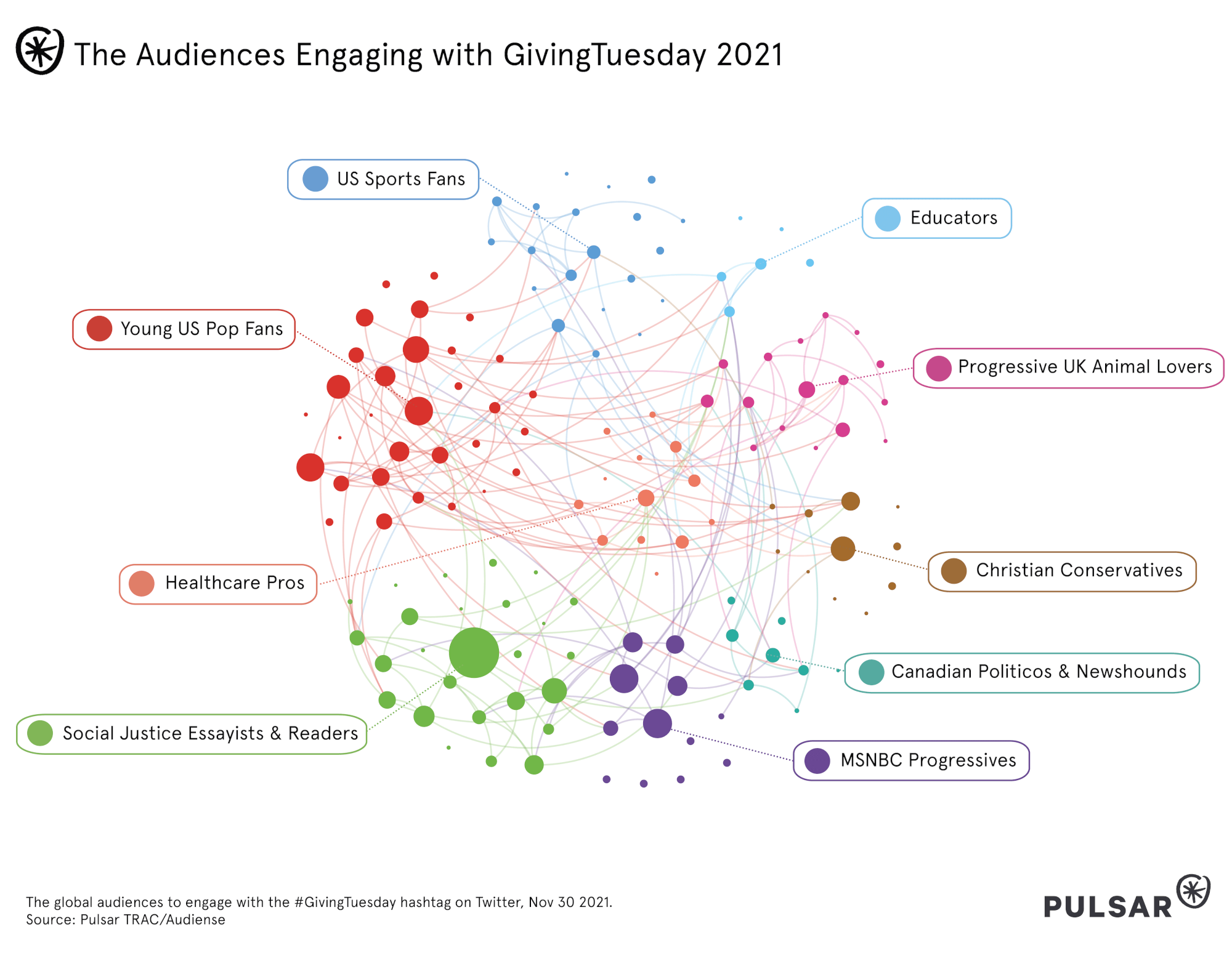 In terms of audience segments, we see see several groups with a strong affinity for news and comment publications, from Progressive UK Animal Lovers and their affinity for left-of-center UK commentators, to Social Justice Essayists & Readers, who consume articles written across the New York Times and The Atlantic by writers of color.

Clearly, being plugged into current affairs seems to correlate to giving behaviors. At the same time, communities which interact with the recipients of charitable giving are understandably active across socials, with Healthcare Pros and Educators being examples.

If you’re interested in learning more about how Pulsar can help your brand understand audiences and emerging trends, simply fill out the form below.