How shifting norms altered the group’s composition, outlook and behavior

Remote working meant seismic change for businesses everywhere. Well, almost everywhere. Because a number of workers and companies had long embraced the idea of ‘Digital Nomadism’. And suddenly, these outliers were no longer living in parallel to society; instead, they were at the vanguard of a transformation in the way we work.

Who are these people? Where are the jetting off to? And what jobs do they do?

Using Pulsar TRAC, we analysed the conversation around digital nomads across the equivalent period in three years: 2016, 2019 and 2022. 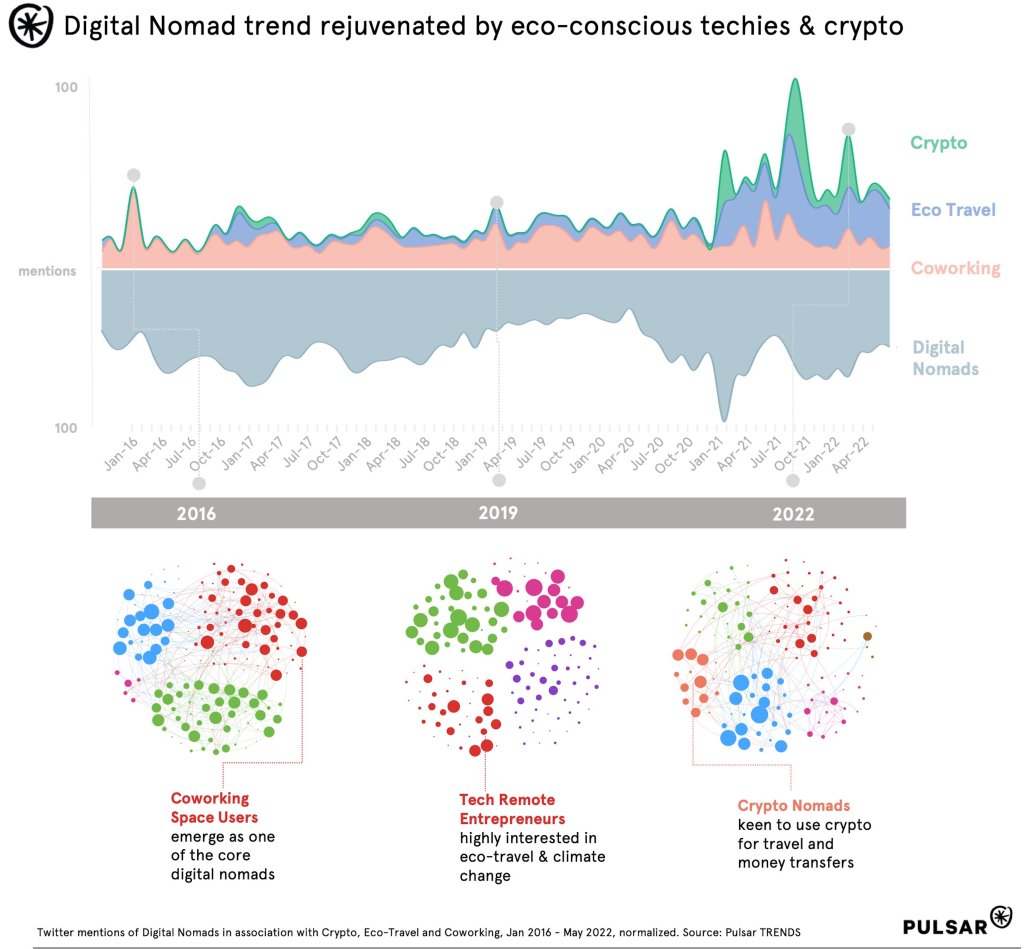 The number of people identifying as or talking about digital nomads fell steeply from 2016 to 2019. Social data suggests several possible reasons, including a gradual disenfranchisement from the heyday of 2016:

Most digital nomads I know settled down after a few years 👨‍🚀
Why?
Unless you have close nomadic friends, it gets lonely 🤷‍♂️
Awesome weather doesn’t make up for friends & family 🤗#remotewok locally + occasional trips feels more durable to me.

At the same time, the term ‘digital nomads’ was also becoming more contentious culturally, used either politically to take aim at an unrooted ‘elite’, and also to stereotype all manners of grifters and trustafarians.

He writes about people changing jobs regularly as if it's been created by demand, entirely driven by arrogant digital nomads, who don't want any ties and think they're citizens of the world.

As a direct result, many individuals who displayed the behaviors and lifestyles of a traditional digital nomad began far more reluctant to describe themselves as such, for fear of association.

The pandemic, or more accurately the normalization of non-office working, subsequently delivered a shot in the arm to a trend that had begun to lose a little lustre. But the most interesting things about this resurgence were the people and topics driving it. Co-working, for instance, does not appear to have gained any traction in this time, given the fact that international co-working hubs were subject to many of the same restrictions workers faced in their own countries.

Instead, we see the increased participation in the wider trend of eco-conscious tech workers, who don’t simply wish to see the world, but wish to do so ethically and with a minimum of environmental harm.  While this group first emerged in 2019, it would help define the conversation taking place some three years later, in the post pandemic boom.

We also see the emergence of an entirely new group: Crypto Nomads. These individuals are wholehearted adopters of crypto and web 3.0 technologies, similar to many other similar groups to have emerged from 2021 onwards, except that their affinity is as much defined by utility, and easier transfers, as it is by investing behaviors.

In addition to who’s doing the travelling, it’s also illuminating to see where it is people are going, which we can do by exploring the interactive visual below:

With a few notable exceptions (such as Japan) every one of the top countries featured on Nomadlist has seen an explosion of online conversation linking it to digital nomadism. And, for all that Thailand and Indonesia place first and second respectively, it’s in Europe, and most notably the Iberian peninsula, that we see some of the greatest growth in conversation. Not only have Northern Europeans seized upon the chance of working in warmer, cheaper spots, local authorities have also begun to seize on the trend’s economic impacts.
And that brings us to the issue of jobs, and what precisely these Digital Nomads are doing to justify the ‘digital’ half of their nomenclature.

From 2016 – 2022, we see a distinct evening out between the different types of job, as the stereotypical view of nomad-as-blogger gives way to a proliferation of roles like software engineer, business consultant and e-commerce professional.
Clearly, this evolution has followed on from the greater degree of flexibility afforded to onetime office workers, especially within technology jobs.
It’s also a direct consequence of how the host nations are thought of and experienced by the workers themselves, as evidenced from the shifting perceptions around challenges to the nomad lifestyle.
The surging conversation around visas is largely tied to conversation around the rise of ‘slowmad’-specific visa, which enables workers to stay in particular destinations for an extended period of time without becoming subject to a nation’s taxes or laws.

So apparently, there’s a visa type that European embassies offer. 👀

If it is Croatia, you’re exempted from tax.
Greece and Spain are also lenient.

I honestly don’t know what you’re waiting for.

In tangent to these developments, workers with full-time, otherwise regular jobs are less worried about fundamentals such as accommodation or internet speed. The gradual decline in loneliness as a concern, meanwhile, appears to reflect the fact that previous iterations of nomad often were stepping out of office cultures and existing social circles. Over the course of the pandemic, these points of contact both diminished, to make looking the rear view mirror that much less painful.
The entrenchment of remote and hybrid models has also had a distinctive levelling effect amongst globally distributed workforces; it doesn’t matter whether you live down the road, or on the other side of the continent. So long as you’ve got an internet connection, you’re good to go.