A Moveable Feast: How do consumers talk about food delivery?

Digging into the social trends behind DoorDash, Deliveroo, JustEat and Uber Eats

Through obliterating the distance between consumers and restaurants, the online food delivery industry is set to reach a valuation of $126.91 billion in 2021.

Delivery as a service is not itself novel, having accommodated the Dabbawalas of Mumbai, deliveries of Korean Jajangmeyon and countless casual workers. But the consolidation of drivers under international companies, and the digitally-native interfaces presented to users, constitute a shift in economic and societal norms.

DoorDash, Deliveroo and the JustEat conglomerate (which also includes the US-based GrubHub and Australian Menulog) were listed as PLCs between 2020-2021 following increasing user numbers – and a corresponding lift in both recognition and engagement:

Naturally, each brand has different degrees of global exposure, meaning that the share of voice differs by territory and audience.

Pulsar TRAC, which leverages social, search and news data, including Twitter, TikTok, Reddit, Facebook and Google Search, allows us to view the disparities in share of voice across the US, UK and Australia.
Uber Eats and the Just Eat family of brands have a worldwide presence that DoorDash and Deliveroo can’t match, but the latter two dominate discussion within the US and UK respectively. In fact, DoorDash even has a respectable conversation share in the UK, thanks to pop culture detectives.

Throwback to when a DoorDash employee leaked that Andrew Garfield was in #SpiderManNoWayHome 😭 pic.twitter.com/Hr47eCoQ9z

For the average consumer, these brands are not hugely differentiated from one another, which has the potential to impact brand loyalty.

In lieu of genuine novelty, we can look at the five qualities consumers associate with brands over the course of their interaction with the apps: speed, ease (the degree of friction in the delivery process), price, attitude (friendly or unfriendly drivers and customer service) and rewards (is there any benefit to brand loyalty?).

Interact with the visualisation below to see how the relationship between brand, country and point of value or differentiation intersect (with JustEat incorporating GrubHub and Menulog):

The first and most obvious observation is how much of the chart is taken up by the US-only Doordash. This reflects the maturity of delivery services in the US. Compare this to Australia, where the market is in its relative infancy, with younger Australians driving adoption.

Back to differentiators, speed stands out as the unifying factor across brand and territory both. Clearly customers see a quick delivery time as a motivating factor behind choosing a service, given how it impacts on both food warmth and overall convenience.

I have got to stop using #UberEats or at least cut down, but it's so quick and convenient #UberEatsAddiction

There is, however, much more variance in terms of secondary priority. Within the USA, and setting speed to one side, each service is identified most with a different quality: DoorDash with ease, Uber Eats with price and GrubHub (under Just Eat) with Rewards.

Within the UK, meanwhile, speed is not only the most cited quality, but also, in the case of both Uber Eats and Just Eat, attracts as many mentions as all other qualities combined. Only Deliveroo, the largest, bucks the trend.

Viewed alongside the greater spread of emphasis within US markets, and the Australian focus remaining very much on expediency and delivery time, it suggests that only when online conversation around a brand reaches a certain volume does speed become deemphasised.

@Uber_Australia I’m really not happy, I ordered a meal that normally comes on a bike, tonight a guy on a motor bike decided to pick it up, not only was it 15 mins late I had to walk up the street as he said there was no parking, now my food is cold.

Of course, a brand’s ability to deliver on these qualities can sometimes fall short of what the consumer expects. And, given the distance between delivery and social media apps across the width of a screen is miniscule in terms of either millimetre or pixel, it’s second nature for individuals to express instant dissatisfaction.

Once again, the relative similarity of interface and surface means a general pattern, with Quality of Service (relating to delivery time and interactions with staff), edging out Condition of Food (Cold, Spilled or otherwise damaged) and Wrong Order. 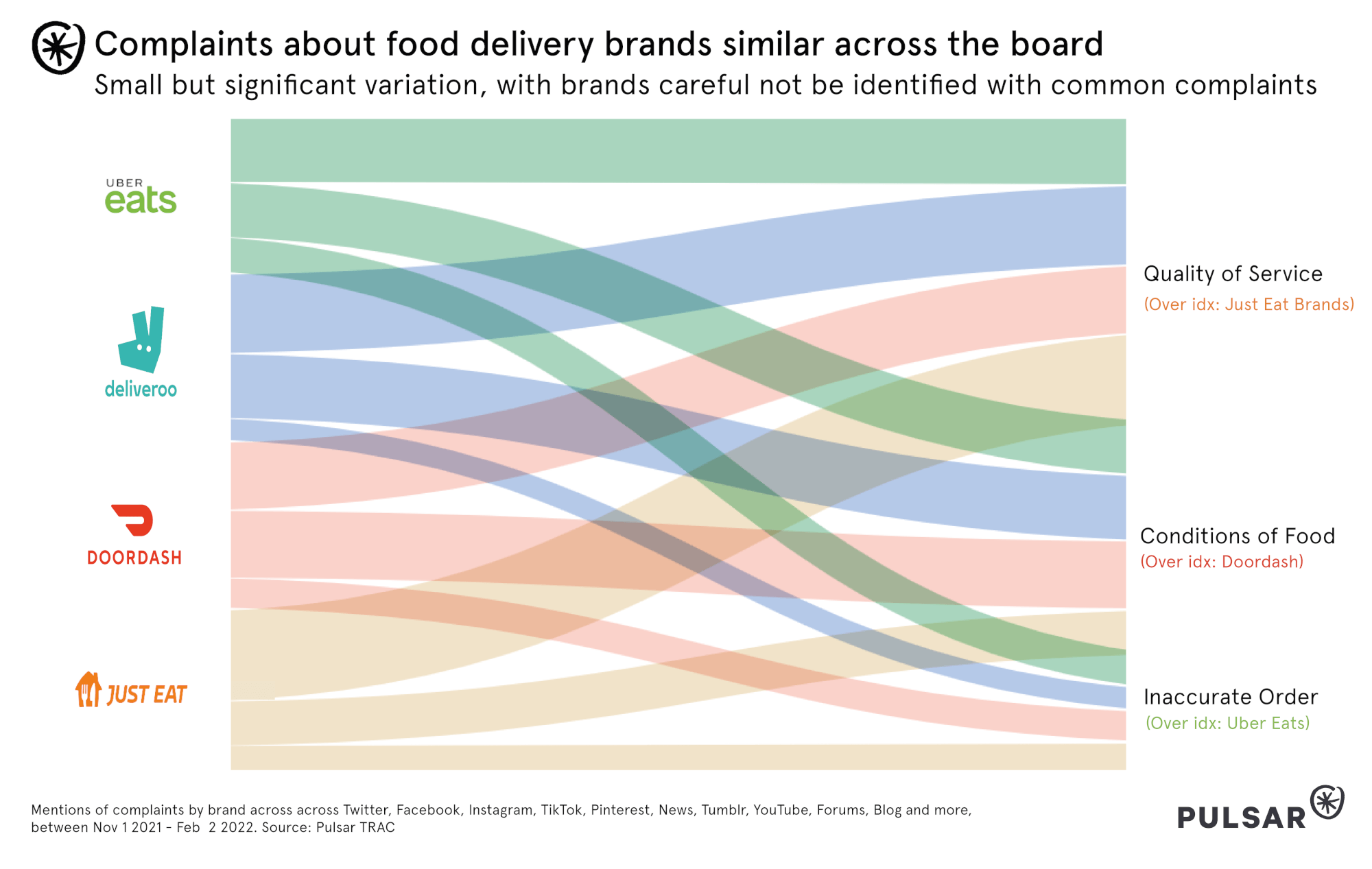 Within this, however, various brands over-index on specific complaints. In each case, the brand itself has relatively little control over the issue at hand, which is rarely a result of technological fault and more likely human error on the part of either restaurant or delivery person. But as issues mount up, and are reported either as one-off complaints on Twitter, or else as part of continuous conversations on Reddit, brands can find themselves becoming associated with specific complaints.

Quality of service can also have a profound impact on tipping etiquette. It takes a back seat, though, to the nationality of the prospective tipper:

Clearly the United States was always going to come out on top here, thanks to its more established culture of tipping. Australia, meanwhile, has a comparatively loosely defined tipping culture, reflected in its low showing, while many posts emanating from the UK appear related to effects of the pandemic and an appreciation of key workers.

Thank fuuuuuck for @Deliveroo during my festive self-isolation. Especially the driver on Christmas Day who put my food on the doorstep but waited until I opened the door to make sure I was ok, which was so nice it made me cry. Tip your delivery drivers, peeps. Especially tonight

More illuminating is a move away from national lines and towards segmentation by affinity and behaviour. When we split the participants within the conversation by their interactions online, we see distinct communities within both the largest US conversation (Doordash), and the largest British equivalent (Deliveroo).

There are clear commonalities between the two. In both instances, the male:female split is approximately 60:40. President Biden and Alexandria Ocasio-Cortez rank as among the top influencers for both, losing out to Lil Nas X in the US, and Marcus Rashford in the UK.

The two audiences also share a clearly defined community in LinkedIn Business Bros, while in Daily Show viewers and Guardianistas, Gaymers who stream and Gay Millenial Only Fans users, Conservatives and GB News Fans, there are clear parallels.

So what happens when we filter discussion of charges not by country, but by community? 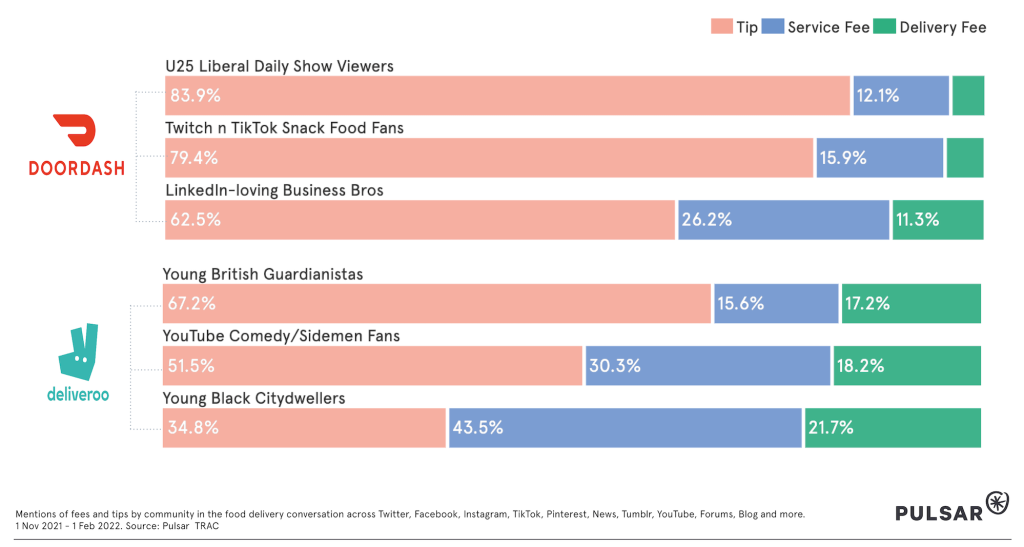 Other groups, meanwhile, cite accumulating service and delivery fees as a major reason for deleting the applications.

Do the maths on all the delivery charges plus service fees. You won’t even need to delete. You’ll throw up. https://t.co/AvZFkFUnTH

Tipping is, naturally, not a one-sided interaction, but also one that involves the driver.

And nowhere is the driver’s experience more clearly mapped than on subreddits such as r/doordashdrivers, r/deliveroos and r/couriersofreddit. Within these forums, drivers exchange frank opinions on their day to day activities and perspectives on the brands who commission them, as well as pursuing more niche topics like investing money earned within trading schemes.

Negative experiences with customers occupy first place. Whether ultimate fault and accountability lie with the customer themselves, or else with the brand and its operational model, drivers use the subreddits as an opportunity to vent irritation, shame and anger with individuals able to relate.

Customer change address through doordash as soon as I arrived. That was not the mileage I agreed to for the pay from doordash_drivers

This sits in comparison to Twitter, which tends to host more consumer-centric content about drivers, focusing on incidents that range from humorous interactions to unionisation and collective action.

These concerns can seem quite removed from the consumer at times, particularly when they’re ordering in something of an ‘altered state’:

Deliveroo and DoorDash are the outliers here, with the latter over-indexing for drunk orders, and the former for hungover orders. The latter likely stems from the British preoccupation with ‘hangover busters’, a concept that Deliveroo themselves have leaned into, while DoorDash’s association with drunkenness appears the results of anecdotes incorporating inebriated riders and monumental drunk orders.

Clearly there are a number of motivations behind individuals and communities ordering certain foods. And, by using Pulsar’s Communities integration, we can see how specific audience segments show an affinity for specific types of cuisine.

Sidemen/YouTube Comedy Fans talk a lot about chicken. In part this is because other prominent British YouTubers have called out their orders, each containing chicken of some type, for being late or in bad condition. Simultaneously, posters make frequent reference to wings and nuggets in both anecdotes and references. Clearly, chicken is central to both this demographic’s ordering habits, and their online vernacular.

Both U25 Liberal Daily Show Viewers, in the US, and LinkedIn Business Bros, in the UK, express interest in grocery. But while the latter report their experiences of ordering groceries:

I’ve been using @Deliveroo since they started but the service has got worse and worse – just has a grocery delivery from @waitrose with missing item which happens- but now they are saying,sorry no refund ! We are currently isolating with Covid and now don’t have food for everyone

… the former are more likely to amplify posts that take a dimmer view of the whole enterprise, and the driver-customer relationship.

As delivery brands consolidate and expand their presence globally, the gourmets, grocery shoppers, cheat-mealers, and drunk orderers who make up their user base remain unified on fundamentals (such as speed), but wildly diverge on everything from tipping etiquette to which food types end up in their order – and on their social channels.