Vegan Leather Alternatives are in: but do consumers see them as sustainable?

From Mushroom to PVC to Apple

Leather is a fashion staple, tightly bound up with our ideas of cool, practicality and many different subcultures.

But as consumers’ ethical concerns and choices pop up all over the economy –around dairy for instance, as well as behaviors like flying– they are starting to pop up around leather as well. While there is still considerable appetite for leather itself, audiences are showing growing interest in leather alternatives, especially those made out of natural materials, from cork to mushroom, to mango. 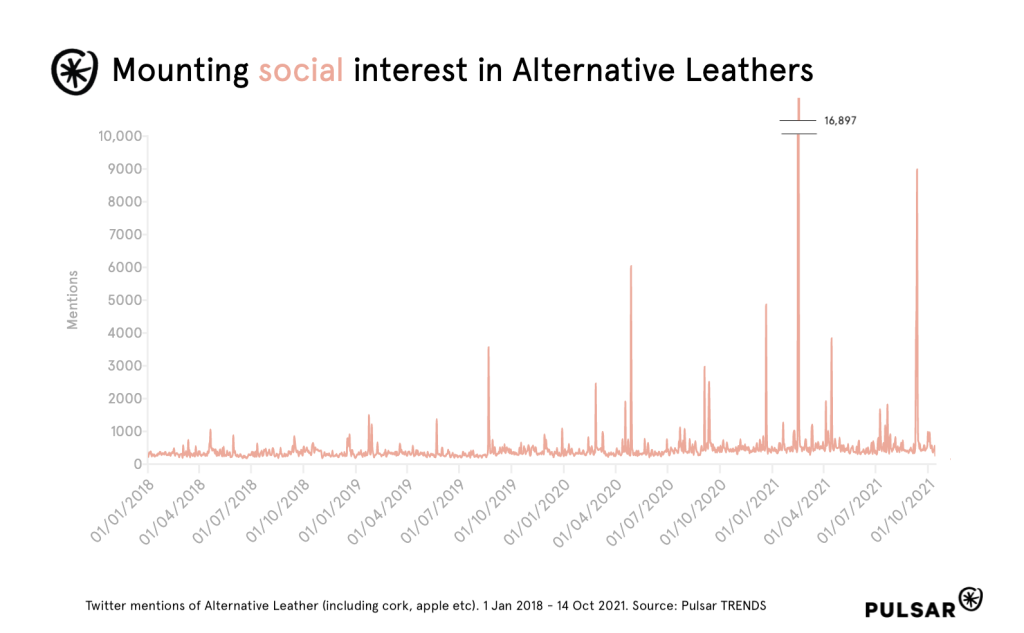 Though pleather and other synthetic alternatives have been around for years (more on those later), a new generation of materials branded as natural, vegan leather alternatives are sparking the most buzz. Using Pulsar TRAC, we quantified how much conversation each has attracted across Instagram, Twitter, TikTok, Pinterest and beyond.

But what are these leathers used for? What final form does the pineapple take in its journey from plant to wardrobe?

Turns out, bags are leading the way. Vegan leather might be the future, but for now it’s largely being bought and used in forms familiar to us from centuries of leatherware.

Jackets and outwear emerge as the most popular clothing type. This matches our findings elsewhere, which indicate durability is the most-mentioned feature of vegan alternatives across social platforms. 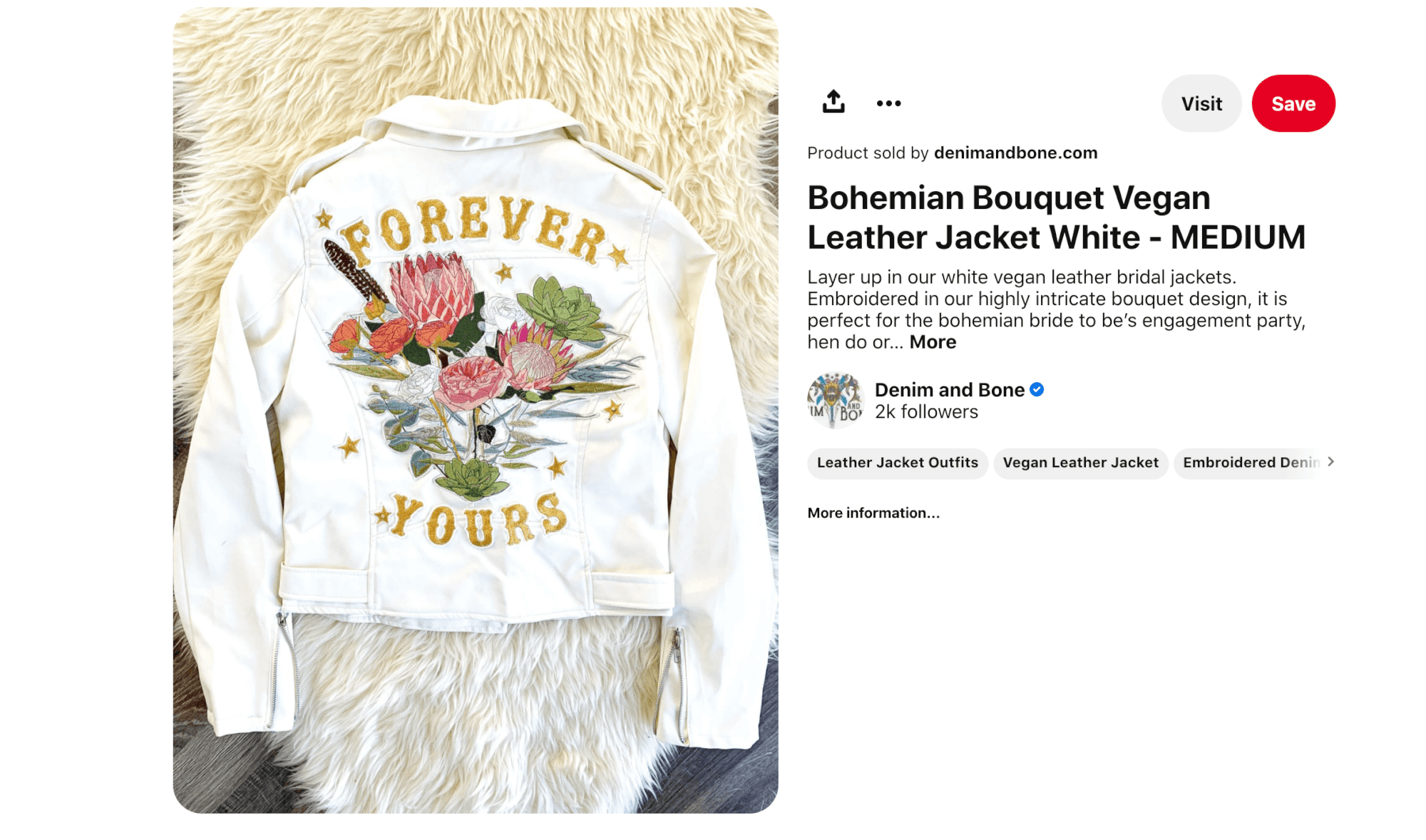 The retro feel of this jacket also speaks to another, broader trend – the styles in which vegan leather is worn and displayed.

Again, this suggests that the originality of the material has not, at this point, led to a corresponding shift in wider styles and aesthetics. Instead, individuals are recreating traditional looks according to their own, modern ethical standards.

Ethical concerns around using animal products have been a driving force behind the adoption of these leather alternatives.

The lack of any clear consensus of labelling, however, has prompted no little debate online, with many opining that harmful plastics have acquired an undeserved stamp of approval through loose association with the broader veganism trend.

Wheennnnnn did pleather get rebranded as vegan leather. Like, who decided this?

Growing search interest in artificial leathers reflects in part increased enthusiasm on the part of consumers – it also, however, suggests elements of uncertainty of the precise composition and ethical standing of various vegan leathers.

Over on social, meanwhile, we’ve already seen that the conversation is prone to sudden spikes and elevations. These are largely accounted for by viral posts declaiming the trend…

"Vegan leather" is even worse for the environment than Leather. It is literally unrecyclable plastic. Leather is a byproduct of the beef industry. If we are going to keep eating beef, which we will, we should make use of the hides. It is extremely wasteful to do otherwise.

… or else distinguishing between nature-based alternatives and opportunism on the part of low-quality plastic manufacturers.

It’s clear that, for now, synthetic materials account for the majority of online mentions.

Within that, Polyurethane and PVC are the two materials that comprise most synthetic leathers.

This leaves Polyutherane as the most-mentioned of any individual material. The gathering of momentum around natural-based leathers, though, suggests that this may not be the case for long.

Who’s the audience for alternative leather?

Vegan leather alternatives have not achieved the same degree of cultural penetration across society. So which are the communities that are most-engaged with the topic, both as supporters and critics? 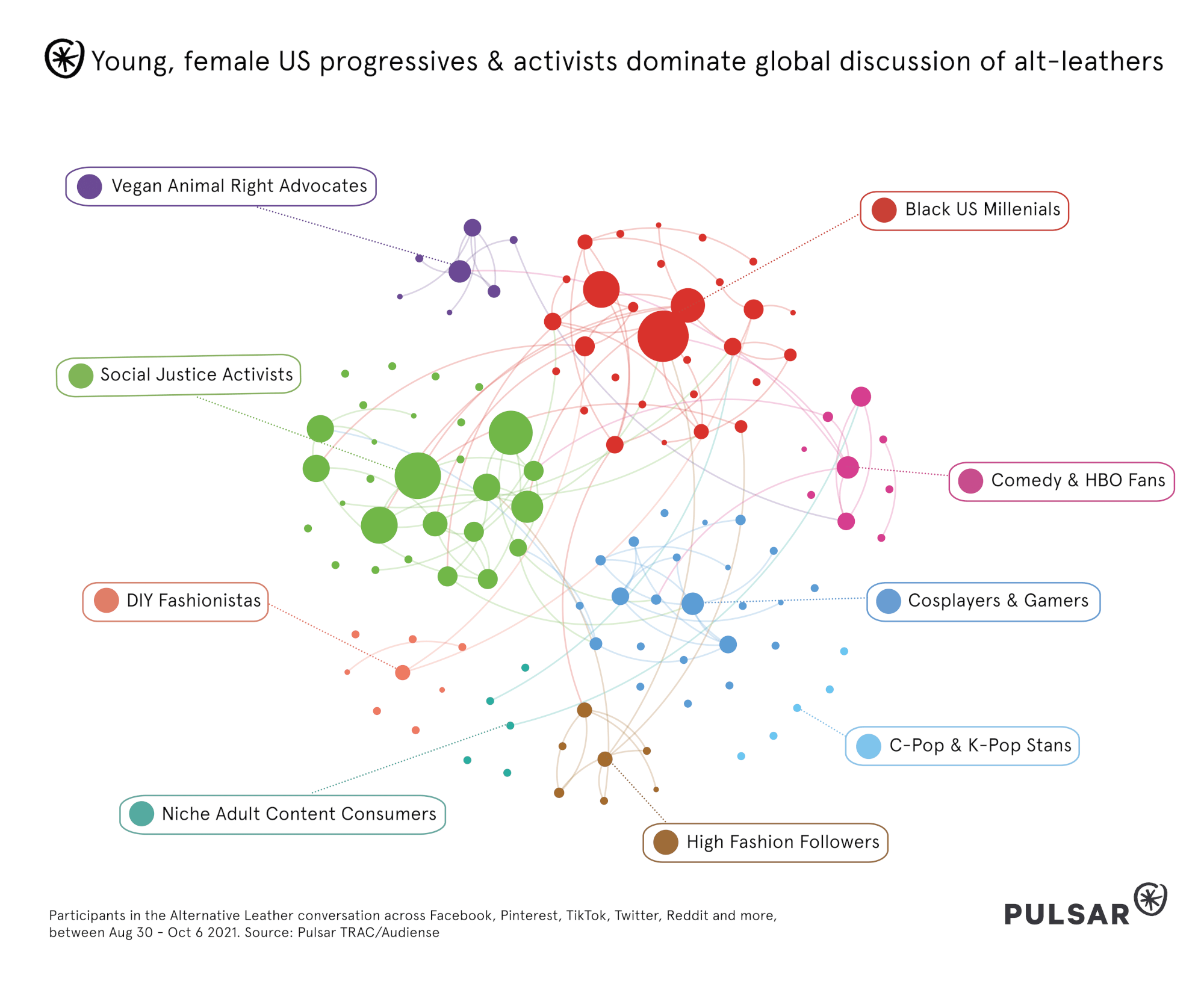 Social activism is a recurrent theme among the affinities and priorities of this audience. These communities appear both the most likely to buy and support alternative leather, and also the likeliest to level charges of greenwashing or inauthenticity.
They’re also, incidentally, particularly likely to link the trend to the Matrix quadrilogy via light-hearted posts:

Just rewatched the Matrix and actually Trinity in this black pleather outfit is The One. pic.twitter.com/dimihkjC8b

On a similar note, fandoms such as C-Pop & K-Pop stans, Cosplayers & Gamers also regularly engage with alternative leather content, in large parts because leather outfits remain a central part of many characters’ or celebrities’ iconography.