Every year, people across the UK flock to the supermarkets to try out the latest Christmas inventions – and while the global pandemic rages on, people are still finding ways to bask in festivities. And what better way is there to do that through the humble Christmas Sandwich?

This –be warned– is no ordinary festive sandwich review article. Whilst other articles will rely on subjective opinions of various office-based tasters, we are using Pulsar TRAC to understand how people are talking about UK supermarket Christmas Sandwiches, as reviewed by the public. In other words, welcome to the UK’s biggest known festive sandwich digital focus group.

Our Twitter-based focus group is comprised of 1,500 individuals in the UK who recently spoke about their Christmas sandwich experience online. These folk are committed to the cause, trialling sandwiches morning, noon and night.

But who are these dedicated souls? By clustering these individuals based on shared affinities (e.g., followership of a brand) through TRAC’s Communities feature, we can identify the different segments participating in the conversation. The affinity segmentation revealed four distinctive segments: 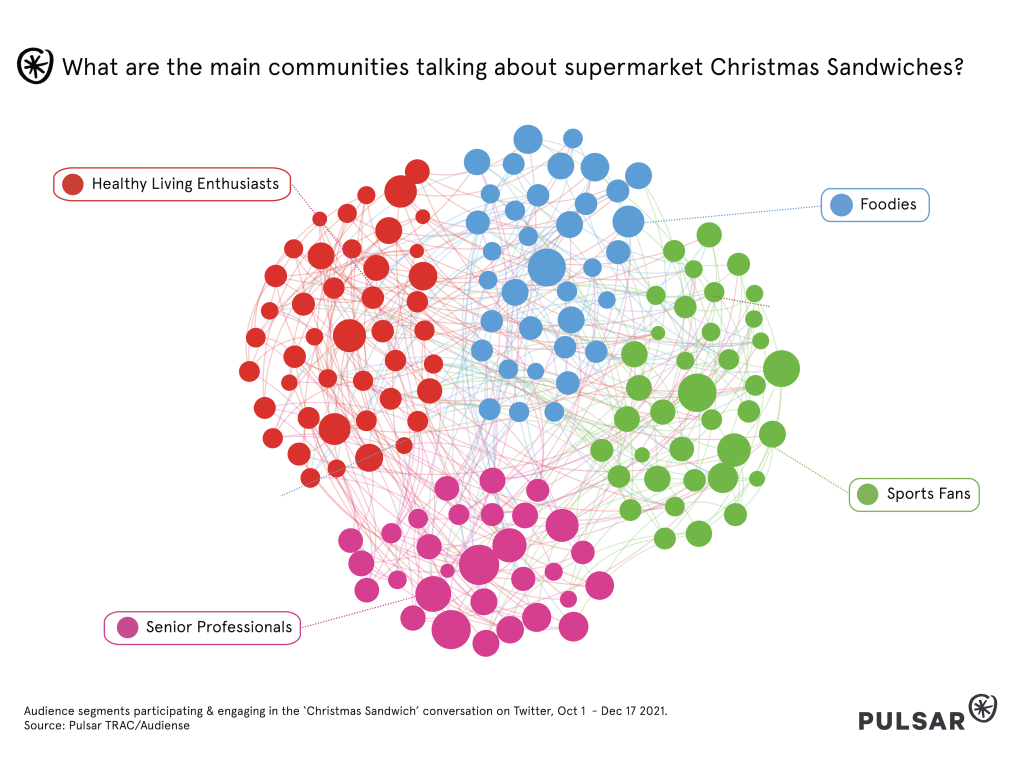 Healthy Living Enthusiasts encompass individuals with a vested interest in our planet. They often describe themselves as vegans, photographers and follow prominent climate activists such as Greta Thunberg.

Sports Fans have a strong affinity towards Rugby and Football, following sports publications and shows such as Sky Sports News, Sport Bible and Match of the Day.

Senior Professionals describe themselves often as Directors, ‘Heads of’ and Board Members, and follow pages such as YouGov and Bloomberg.

Foodies are our final segment, defined by their interest in eating out at restaurants. They do not disdain fast-food joints such as Frankie & Benny’s and McDonald’s, and also have a passion for home cooking and cooking shows, engaging with popular chefs such as Gordon Ramsay and Nigella Lawson.

With introductions out of the way, let’s get down to our main business here: the sandwiches.

Tescos have got the limited edition Christmas sandwiches, which means it’s time to start juuggin’ if you are yet to purchase your presents for the festivities.

The Best Supermarkets for Festive Sandwiches

But as we like to say at Pulsar, audiences are not monoliths – and different communities here had different sandwiches preferences: Healthy Living Enthusiasts, Senior Professionals and Foodies all discussed M&S with the greatest frequency, Sports Fans had a clear affinity towards Tesco (33%) and Sainsbury’s (33%).

Whether brought on by the festive season or a post-tasting carb-induced high, our tasters were quick to praise the supermarket sandwiches, with conversational positivity standing at 52%. In addition to being the most-mentioned, Tesco, M&S and Sainsbury’s were also the most positively reviewed supermarkets.

“>Members of the focus group that frequented Tesco (namely, Sports Fans and Senior Professionals) saw the arrival of the sandwiches on shelves as firing the starting gun on nationwide festivities:

tescos christmas sandwiches are out…

TESCOS CHRISTMAS SANDWICHES ARE OUT!

Marks and Spencer’s praise was more specifically targeted, and directed at their Turkey Feast Sandwich. The return of the sandwich was so highly anticipated by members of this group that it justified the breaking of sacred no ‘Christmas before December’ rule.

Broke my own Christmas rules today to hop on the M&S turkey feast sandwich bandwagon and don’t feel remotely bad about it. Still no trees before next Wednesday though, thank you please.

Sainsbury’s garnered praise for the subtle and perfect proportioning of cranberry. This is high praise in a food category which is marked by disproportioned cranberry disappointment, with 33% of all cranberry conversations being negative.

Turkey Feast @sainsburys a welcome start to festive season, turkey and bacon on point, yes stuffing could be better but near perfect amount of cranberry and bread top notch. The reintroduction of the sandwich into the meal deal commands respect, top value at £3.50. [3.75/5]🎄🥪 pic.twitter.com/yyCVqS5VSM

Of course, cranberry is not the only filling we’ve examined. Long-time seasonal favourites such as Bacon and Turkey were the most spoken about amongst tasters. Vegan took a high share of voice across audiences and was the most discussed filler type for Healthy Living Enthusiasts (36%). Foodies, meanwhile, were partial to a greater variety of fillers with Cranberry, Brie, Salmon and Beef seeing a higher share of conversation among this audience.
Salmon was the most polarizing filler, with 47% of all conversations being negative. This negativity was driven by concerns of ‘Christmas-washing’.

Tired of supermarkets Christmas-washing their sandwiches. Can you consider a Waitrose Smoked Salmon, Egg and Truffle Sandwich Christmassy? https://t.co/j1ym0NyOqN

Conversely, our focus group established stuffing as, on average, the best of the festive fillers. Which is not to say there weren’t certain concerns, chief among these the graininess of the stuffing and the quantity included in the sandwich.

So where should you buy your sandwich?

With all of this in mind, the final question to consider is the following: which supermarket is best based on your filler preferences? By looking at the positive-sentiment sandwich filling mentions made by Twitter users, and mapping these against individual supermarket mentions, we can answer exactly that.

Sainsbury’s: The go-to if you are in the mood for Salmon, Brie, Beef, Pigs (Under Blankets) or veggie fillers. Sainsburys’ Beef Wellington Special was heralded as a top tier festive sandwich across our Twitter tasters, whilst their On The Go Brie & Cranberry came out top versus comparable sandwiches at other chains.

Tesco: The best bet for Stuffing, Brie (tied with Sainsbury’s), Cranberry, Vegan and Trimmings fillers. Not only do Tesco sandwiches mark the beginning of the festive season, but they are also regarded as a solid option; a staple of the seasonal sandwich diet.

It’s a strong start from @Tesco and already an early contender for Christmas sandwich of the year. Lashings of cranberry sauce along with the sage and onion stuffing compliment the malted bread so well. Loads of Turkey. Could have been more bacon.Going to take some beating

M&S: Our tasters ranked M&S as the winner when it came to Pigs in Blankets and Gluten free filler offerings. Whilst the Pigs (in blankets) sparked some initial controversy among tasters due to its lack of Turkey, members of the focus group that trialled the sandwich ultimately judged it to be one of 2021’s best.
Have your views been represented? If not, set a reminder to head to Twitter this time next year to get your opinion included in the Christmas Sandwich Showdown!

If you’re interested in diving deeper into this dataset or would like to learn more about how Pulsar can help your  brand understand their audiences and emerging trends, just fill out the form below.

The audience talking about leftover food is heating up