The audience conversation for TV shows: drops vs. weekly releases

TV shows released all in one 'drop' create a different 'shape' of the audience conversation compared to shows going out weekly.
Written by Victoria Gray

There’s two kinds of TV shows: the ones which you can binge-watch in one go, and the ones you need to wait around for, week after week.

These two release strategies (we’re going to call them ‘drops’ vs ‘weekly’ shows) impact not only writing and production, but also how these TV shows marketed, and of course how they are talked about on social media.

Take for instance the first season of Stranger Things, one of the most successful recent releases by Netflix, a company which has blazed the trail in the ‘drops’ strategy. 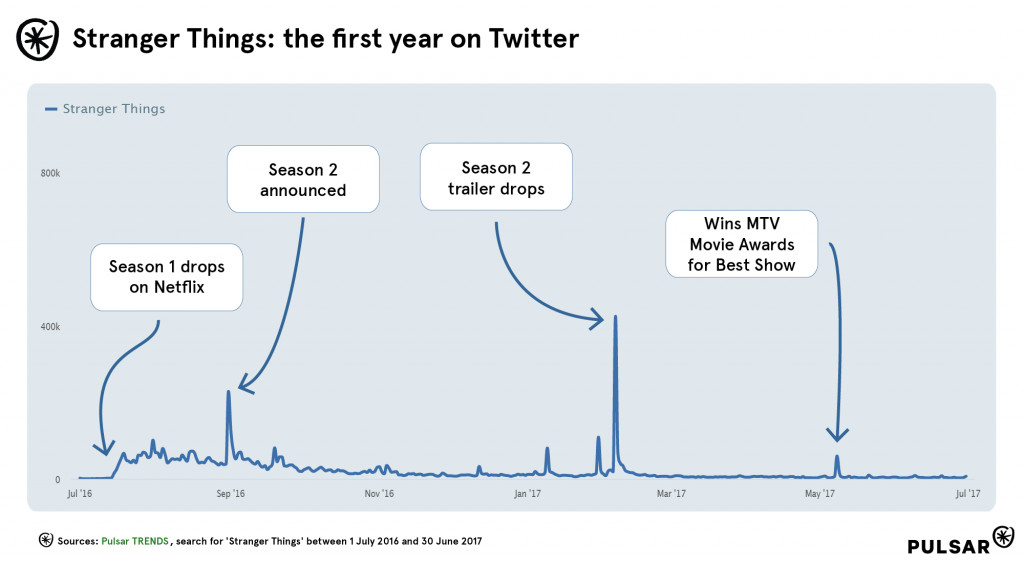 While the biggest spikes relating to Stranger Things over its first year were for news about the show (new season announcement/trailer, awards), buzz around the first season was well-sustained throughout launch, as more people discovered the show and began to engage with it.

There were over 20k tweets a day about the show from its release until the beginning of October 2016, over three months after its release, and perhaps as long as the season would have been on TV if it were released week-by-week.

Compare that with Westworld (HBO), a similarly popular TV show, which exhibits a prototypical ‘weekly’ spiky pattern of conversation at each episode release, with the biggest spikes around its premiere and finale.

The conversation about the show dropped off much faster than Stranger Things after the finale, only picking up again when it won awards or announced a new season.

Conversation about the Crown, another Netflix drop, shows even steeper lines.

The royal series got the most attention when the first season dropped onto Netflix, which dropped off almost completely after six months, picking up only when it won awards or announced a new season.

The Handmaid’s Tale (Hulu) another very successful show, exhibits yet another pattern, as the show took some time to garner a decent amount of buzz.

High volumes continued well past the season’s finale in June, also as American politics began to penetrate this conversation (just like it does in many other fields).

But what does this ‘shape of the TV show conversation’ look like for a somewhat less popular show?

The Marvelous Mrs. Maisel, one of Amazon’s most critically acclaimed shows, managed to generate very little conversation upon the release of its first season, with more leading up to awards season, and the announcement of the second season, indicating people are perhaps drawn to it by the critics reviews, rather than the crowd.

Ok, but what about the biggest, baddest show of them all?

HBO’s Game of Thrones is the grandaddy of weekly appointment TV shows, keeping viewers’ (and social media’s) attention for a whopping 8 years, over as many seasons.

Talk about the show is rarely absent from Twitter, even when it isn’t on the air.

In the six months leading up to the 8th season airing, GoT still has had a baseline of nearly 1m tweets a day

As the season finale approaches on Sunday, we can expect the online conversation to crash through the 4 million mentions ceiling, and bring down the house(s).