Is there a viable audience for The Independent Group in the UK?

Data says yes. @TheIndGroup's audience is not just the 1%.
Written by Davide Berretta

You might have heard: over the past few days, 11 Members of the UK Parliament have quit both the Labour and Conservative Parties to join a new centrist, anti-Brexit bloc called The Independent Group (aka TIG).

Should this turn into a party, would it be a viable one?

The Labour Party and many affiliated with it are suggesting it’s not, representing only a small elite, aka “the 1%”.

Just a heads up. There’s no demographic in Britain to whom this new party appeals to more than senior journalists at national broadcasters and newspapers. It’s their worldview made into a party. Do bear that in mind in the coverage in the days and weeks ahead.

But with polls showing the group at 10% and their Twitter account @TheIndGroup racking up followers in the tens of thousands per day, we decided to look for ourselves through the lens of social data.

On Twitter, conversation volume around TIG and the Labour Party (most of the defectors hail from Labour) is quite large, with 430k conversations about TIG and more than 1M about the Labour party (via Pulsar Trends). The two conversations also seem to match in shape.

Our research also shows that the social audience for The Independent Group is much more varied than some may suggest. 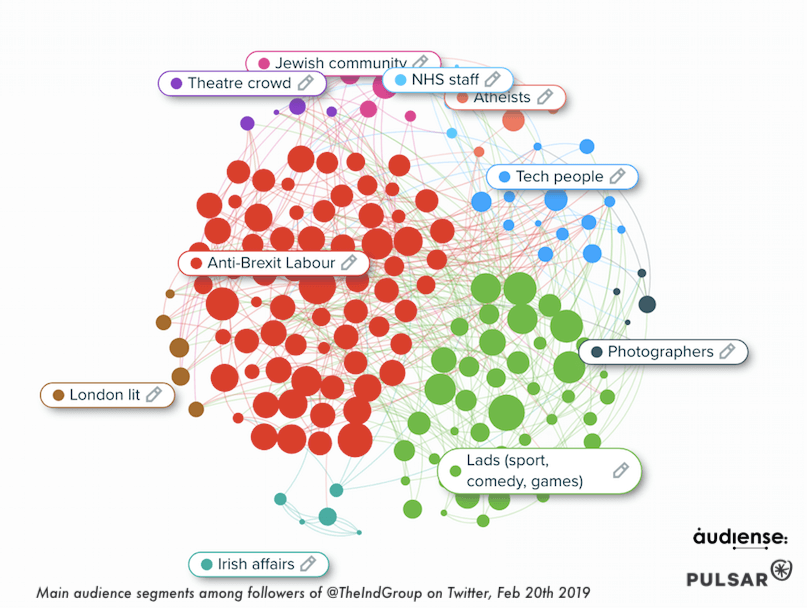 40% of them live in London, which seems to suggest that this could very well be a “metropolitan elite” audience.

But is it really?

The segments (see image above) that make up this audience is where things get interesting.

On Twitter, where it is now at 163k followers, @TheIndGroup seems to have attracted an interesting mix of different constituencies:

It’s the early days of course, but it looks like The Independent Group is already cobbling together many different groups united against Brexit and appealing to an audience that’s significantly broader than the 1%, particularly if we look at the ‘Lads’ segment.

But what does this audience talk about when it talks about TIG? 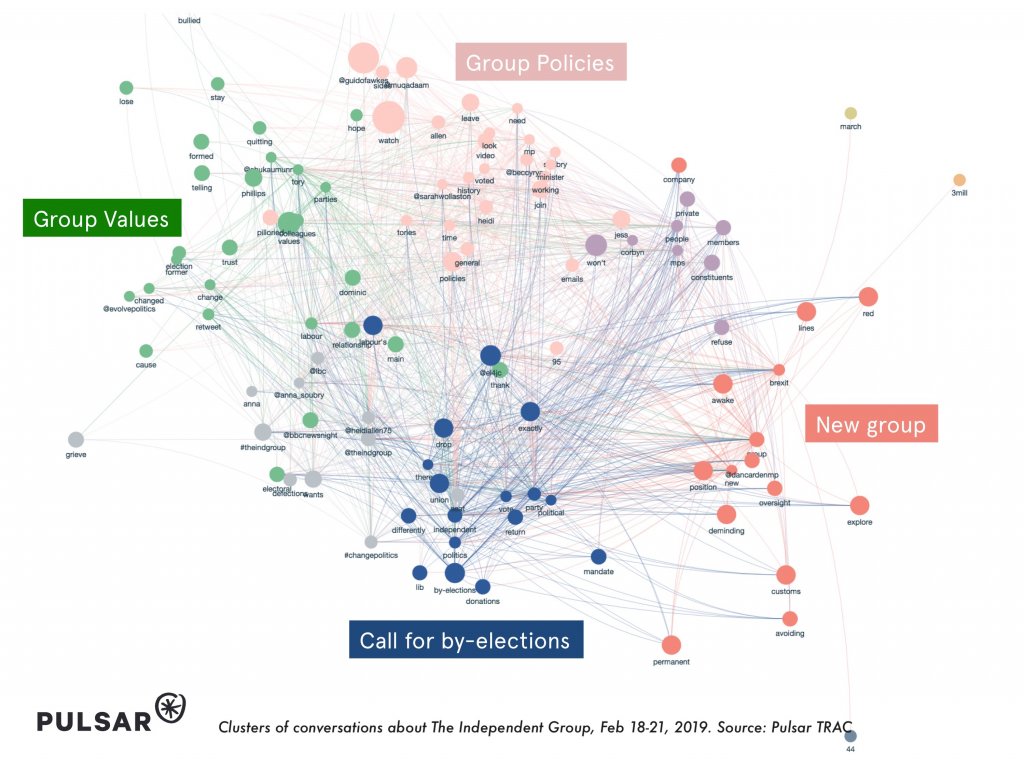 Our clustering (image above) of the TIG conversation (via Pulsar TRAC) seems to suggest the audience is split between people who are evaluating their viability as a potential political party (what are their policies? what are their values?) and people demanding that the MPs who broke away call by-elections to get the blessing of the voters who elected them (with either the Labour or Conservative party), and possibly shut them down.

TIG’s audience challenges going forward are also significant – the gender skew of this audience is substantial (71% male to 29% female). Can TIG win over women — who voted Labour substantially more than men at the 2017 general election (43% to 37%)? Or do Jeremy Corbyn’s socialist policies continue to appeal more strongly to this group than the pro-austerity leanings of some MPs in this new bloc?

We’ll be keeping an eye on this new audience on the rise, and we’ll update this post as we do more analysis.