Climate-related trends seem to start in Sweden, then spread everywhere else.
Written by Oryelle Clements

If you’re looking for the next big trend in the environment or sustainability movement, you might want to brush up on your Swedish – specifically Flygskam.

While concern about the climate crisis is global, Sweden is punching way above its weight in originating new climate-related leaders and trends that then spread around the world on both traditional and social media.

After Greta Thunberg became the face of the climate crisis movement, “flight shaming” or, in its original Swedish translation, Flygskam has become a substantial movement in its own right, with mention peaks well exceeding 1000/day, and worrying investors over the effect it will have on airlines’ bottom line, according to a UBS survey.

Greta, of course, is no stranger to this movement: she herself never travels by plane, and with her boat journey to the Environmental Summit in New York in September, she raised massive awareness about the topic.

The word describes the feeling of shame or embarrassment when traveling by plane due to the huge levels of CO2 emissions, as well as the act of shaming others for traveling by plane. The behavior got initial traction in November 2018 in Sweden, before being picked up in the Netherlands, and Germany. 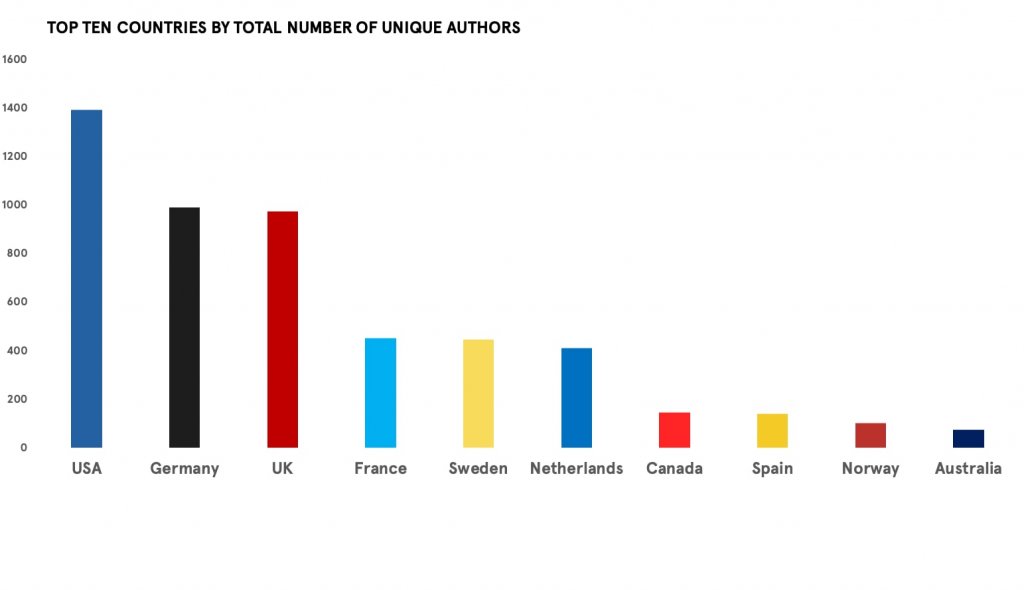 The topic is largest in the USA, Germany, the UK, France, and only then Sweden and the Netherlands.

But while translations of the term –the English flight shame included– abound, the Swedish flygskam has retained its importance. Just like Greta’s posts and here “Skolstrejk för klimatet” cardboard protest sign, the Swedish term has been adopted and bound people together across non-Swedish speaking countries as well as the country of origin, similar to recent Scandinavian lifestyle craze hygge and lykke.

When we explored the frequency of all of the different terms for flight shame, we saw that the Swedish term Flygskam is the most popular, followed by the German “Flugscham” which translates as “flying ash”.

The largest uptick in online volume came after English media’s Yahoo! News & The Blaze wrote about “Flight shame”. This was not the first mention of the English translation of the phrase (the Guardian wrote about it on January 2019), yet these articles saw high engagement on twitter, as a response from the increased climate conversation observed this year.

From that point on, people started to take pictures of themselves on trains instead of planes, mimicking Greta Thunberg’s train journey throughout Europe.

We looked at four, week-long periods throughout the year to identify the spread and changes within the flight shame conversation: October 2018, April 2019, August 2019, and October 2019. We can see that volumes in August are 6x as big as the previous April and 24x larger than the beginning of the conversation in October 2018.

In terms of sentiment around the words, we can see negativity grow from the end of 2018 as people react negatively to being judged and told that they shouldn’t fly. This was particularly prevalent in early 2019 as flygskam got translated into English and discussed in high profile, English-language media. That negativity dropped off in August, during the most significant peaks in conversation, but slid back up when it got re-associated with Greta Thunberg. The “shame” element of flight shame, although a key focus for the movements media coverage, touches a nerve with the global public and drove a negative backlash.

As flight shame has grown into a mainstream, established phenomenon, the concept of “train bragging” or, in Swedish, “tågskryt” hasn’t quite broken out yet. Train bragging refers to people choosing to travel by train instead of flying,  then posting about it online. Peaking in May, mentions of train bragging are short-lived and are driven by news articles featuring the Swedish term flygskam. Kind of like in the article you are reading.

This suggests that although flight shame, now a staple of “green shame” may result in a physical shift in flying behaviours, train travel is only seen as an available, temporary solution, not a more-attractive alternative.

How sustainability took over the bottled water conversation