Influencers are now well entrenched as part of the marketing mix in many industries. But debates on the value of influencer marketing and on whether influencers are “a scam” or lacking “authenticity” are happening across marketing departments around the world every day. For marketers, this results in overwhelming and often contradictory advice about how to find the right influencers in order to reach the right audience.

After years of running campaigns and research projects with brands and agencies, we have developed what we call an audience-first approach to influencer marketing, which allows you to understand online influence, and to design a data-driven influencer marketing strategy within your broader marketing efforts.

The audience-first approach to influencer marketing

We call this step-by step process “audience-first” because rather than on the influencers themselves, it focuses on what make influencers valuable: their audience. 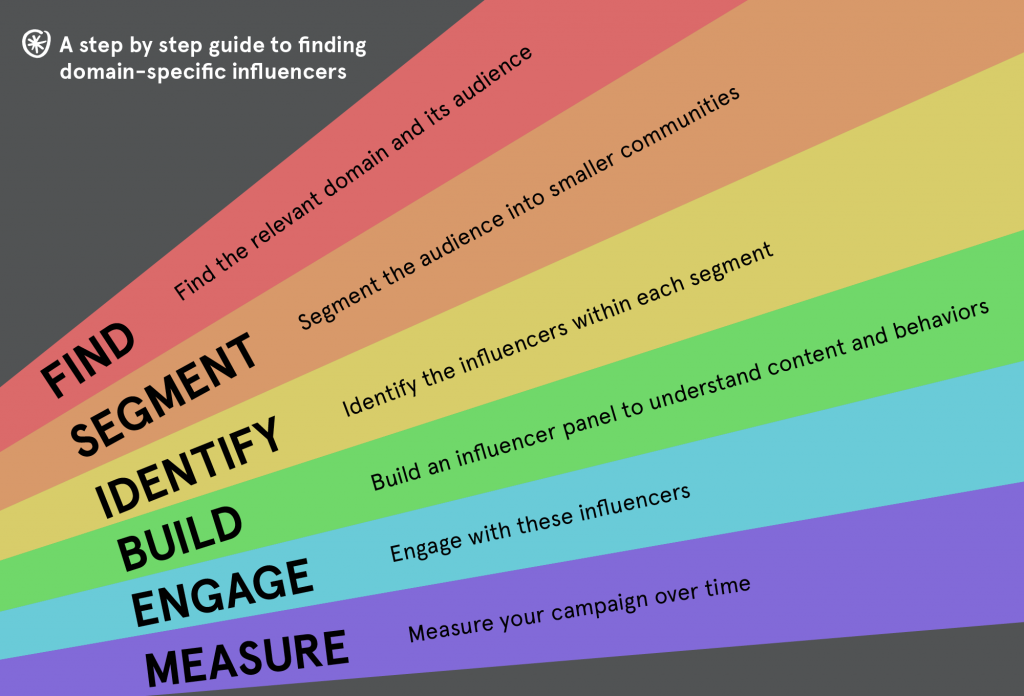 Let’s go through each step before diving into what each of those means.

We built the integration between Pulsar and Audiense precisely to make this process seamless. Our communities filter in particular allows you to zoom in on how different segments in your audience talk about a certain topic, allowing you to recruit the right influencers that speak the same language as the community you are trying to reach.

For instance, below is a map of all the distinct communities that follow @Goop on Twitter we created while studying wellness in LA. The majority (10%) of Goop fans identify as strong women, or lady bosses. Other communities are made up of shopping enthusiast ‘materialists’, artists and designers and people from London – all of whom are very separate, and would have very different influencers apart from @Goop itself. 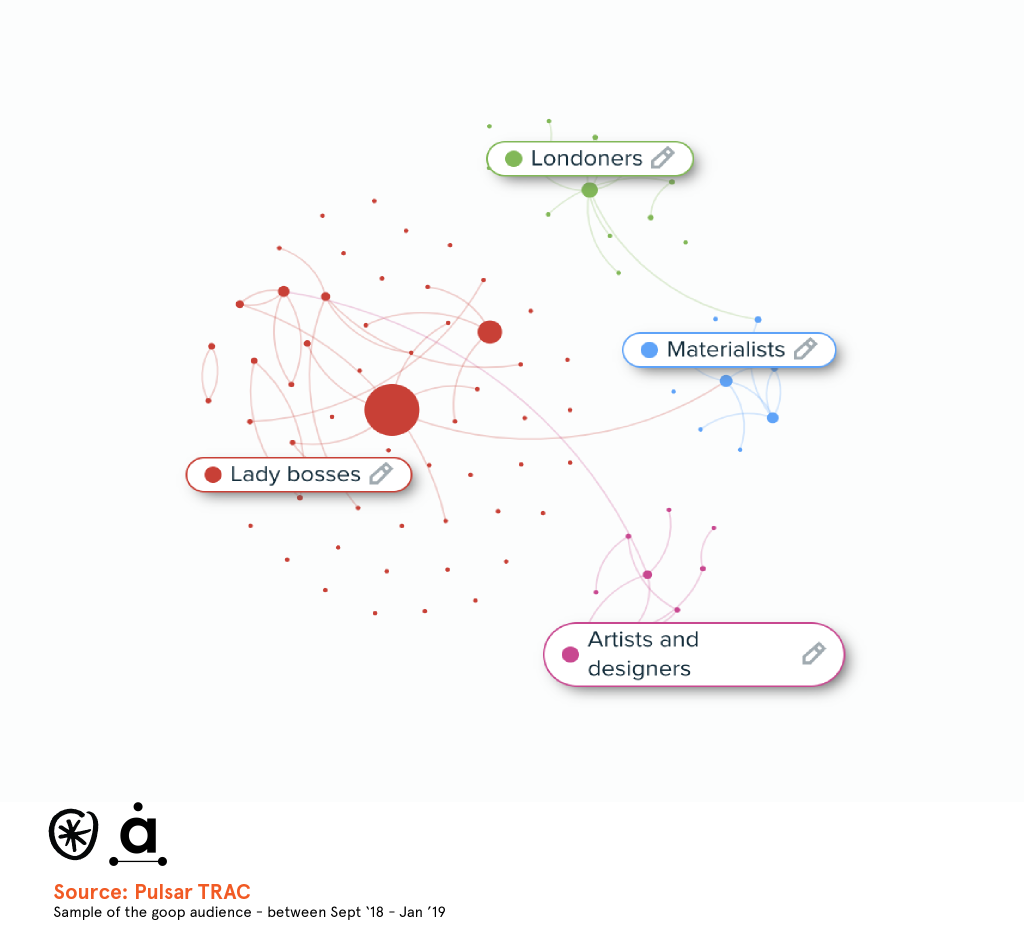 If you’ve read through the steps above, you might have noticed we always speak about a number of influencers – a different one for each community.

That is because we believe that universal influencers –people who are inherently influential throughout the buying journey and who are able to influence audiences across the board, about everything, don’t really exist.

The myth of the universal influencers is one we carry over from the early days of social media marketing, when our understanding of the dynamics of social networks, and of influence in general was quite superficial.

What we have seen over the past few years is the rise of domain-specific influencers as one of the best opportunities to speak to the segments in your audience you want to reach.

Whether those are micro or macro influencers, these individuals’ credibility relates most strongly to the domain they have gained notoriety in, but what’s most important when thinking of integrating in your marketing strategy is understanding the audience and community they are a part of, rather than the influencers’ own activity.

Micro influencers are people who have small-to-medium-sized following but very high engagement, who tend to have some influential ability within a specific domain and a certain kind of conversation and behavior. Micro-influencers are not celebrities, they speak to their own niche audience and they have the bandwidth to engage more closely with the audience they have built because it’s not a mass audience.

Macro influencers tend to have a very different way of engaging with the audience you want to reach compared to micro-influencers, they are talking to a mass audience, they are celebrities, they are distant from that audience.

How to find domain-specific influencers

However influential you are, you’re always trying to reach an audience. And we know that an audience is never ONE, but rather a system of communities that do not necessarily talk to each other or overlap.

For example, an audience interested in fitness can be made up of very different communities like personal trainers, weekend cyclists, long distance runners, yoga enthusiasts and swimmers. They are united under the umbrella of fitness but have very different reasons to care about it, and very different people they listen to.

Understanding influence and finding the right influencers to reach your audience has to start from understanding the structure of the audience you’re trying to influence in the first place. 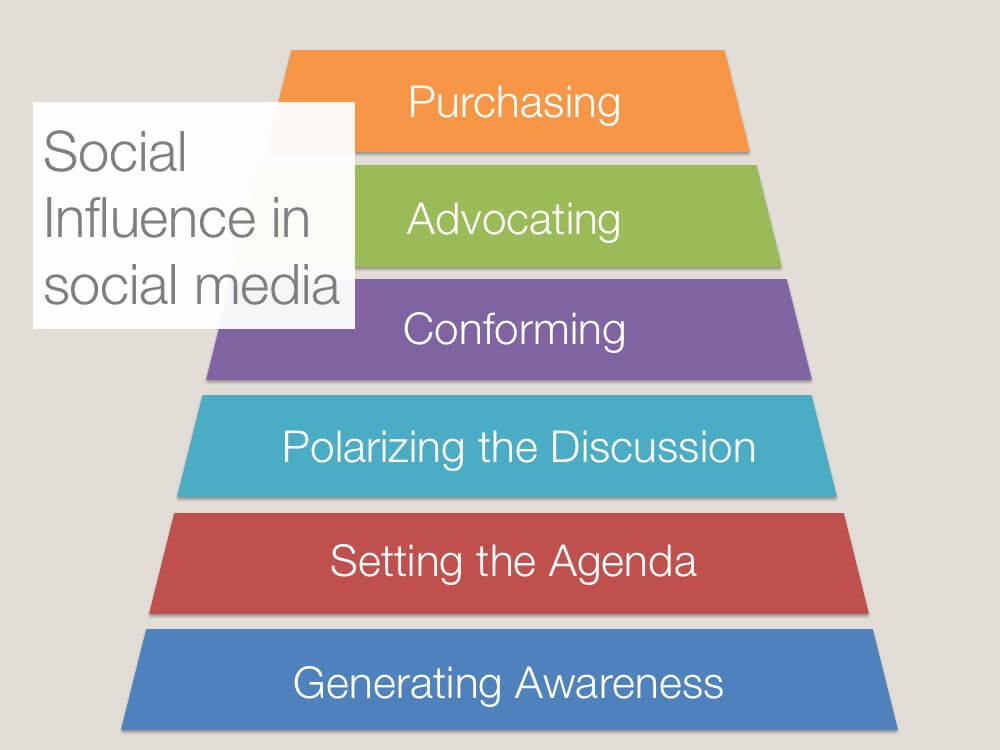 Once you’ve managed to map your audience and its structure, you can finally try and gauge which individuals have any influence within the audience segments you are trying to reach.

Here are a few key features we’ve seen again and again which you should look out for when trying to assess the influence of a given social media account:

We’ll leave you with one example, that relates to the seemingly niche cleaning audience. Mrs Hinch, known on Instagram as @mrshinchhome.

A hairdresser from Essex, England – Mrs Hinch posts pictures of the various corners of her cozy grayscale home. And an unlikely audience of cleaning enthusiasts –the #HinchArmy– follow her every scrubbing.

Of course she is not solely responsible for setting the agenda amongst the cleaning domain: Mrs Hinch is at the top of her own pyramid, but she herself is a member of a community of cleaning enthusiasts on Instagram, and credits her audience constantly.

But when she recommends a product… well that product –in this case her cleaning sponge, the Minky M-cloth– goes out of stock fast.

Thank you for your patience🙏🏼 – we will let you know as soon as possible via our website, Facebook and Instagram when stock is next available📲. We are working hard to build up stock to fulfil the incredible demand👊🏼. We are overwhelmed by your tremendous support💙 and understand your frustration, but please bear with us, we are doing everything we can🙏🏼👊🏼 #minkymadness #hincharmy #minkeh

The Pulsar + Audiense integration will change your marketing

The Cat-fluencers of Instagram: a framework for influencer marketing