Subway pulse: what people are saying (and doing) underground in 5 major cities

If you want to know a city, spend some time on the subway. You’ll be sure to overhear some interesting conversations.

A haven for audience insights

The systems that move us around are part of what shape the culture of the cities themselves. The public spaces that are shared between hundreds of people of different ages, classes and backgrounds, as well as visitors to a city trying to get around, creating the framework for hundreds of tiny stories about systems, authority and change in that city.

We took a look at what audiences are saying on Twitter about the subway system in five different global cities around the world for a week at the end of January 2018 using Pulsar TRAC. Here’s what we learned.

The world’s oldest underground rail system is also one of the most stereotypical. Complaints about the morning commute, queues and manspreading dominate. There’s everything you would expect for a commuter system that has existed for over 100 years, but it is also where Londoners show their humor: this London-based barrister for instance, turned a sneeze in a crowded tube carriage into a riveting story of heroism which went viral during the week we monitored.

The New York subway is in crisis.

And the tweets show New Yorkers witnessed assaults, flames on the tracks, tragic stories of homelessness, and talked about delays (often using swear words), the dire state of the system, the MTA (the public agency running the subway) running out of money, and rich citizens lobbying against elevators for people in wheelchairs.

We even saw a story about Joe Lhota, the head of the MTA, pleading for more subway love on Twitter. Not sure that’ll work, Joe.

The Tokyo subway system is the world’s busiest, moving 8.7million people a day. Japan’s rail system is famed around the world, and it appears the subway is no different. Although differences and language and alphabet may have held this search back a little, the users of the Tokyo metro seem to have little to complain about.

The most mentions of the metro came up around a story about the Hibiya line playing classical music in the cars for relaxation purposes- provoking a spike in mentions on Thursday 26 January as can be seen above in our stream graph – although this didn’t seem provoke a huge change in sentiment around the subway.

Another very popular conversation happened around this 3D model of the Tokyo subway made out of metal strips.

Mexico City’s subway is a huge part of the city’s cultural identity. It’s subsidized by the government, with food stalls, shops, murals and even a metro museum within the network.

And people seem to use it to have a lot of public sex. Several of the top tweets over the week we analyzed included unequivocal footage along those lines: we’ll spare you a link, but if you’re marketing condoms or planning a safe-sex campaign in Mexico, you might want to take a look at the hashtag #cruising. 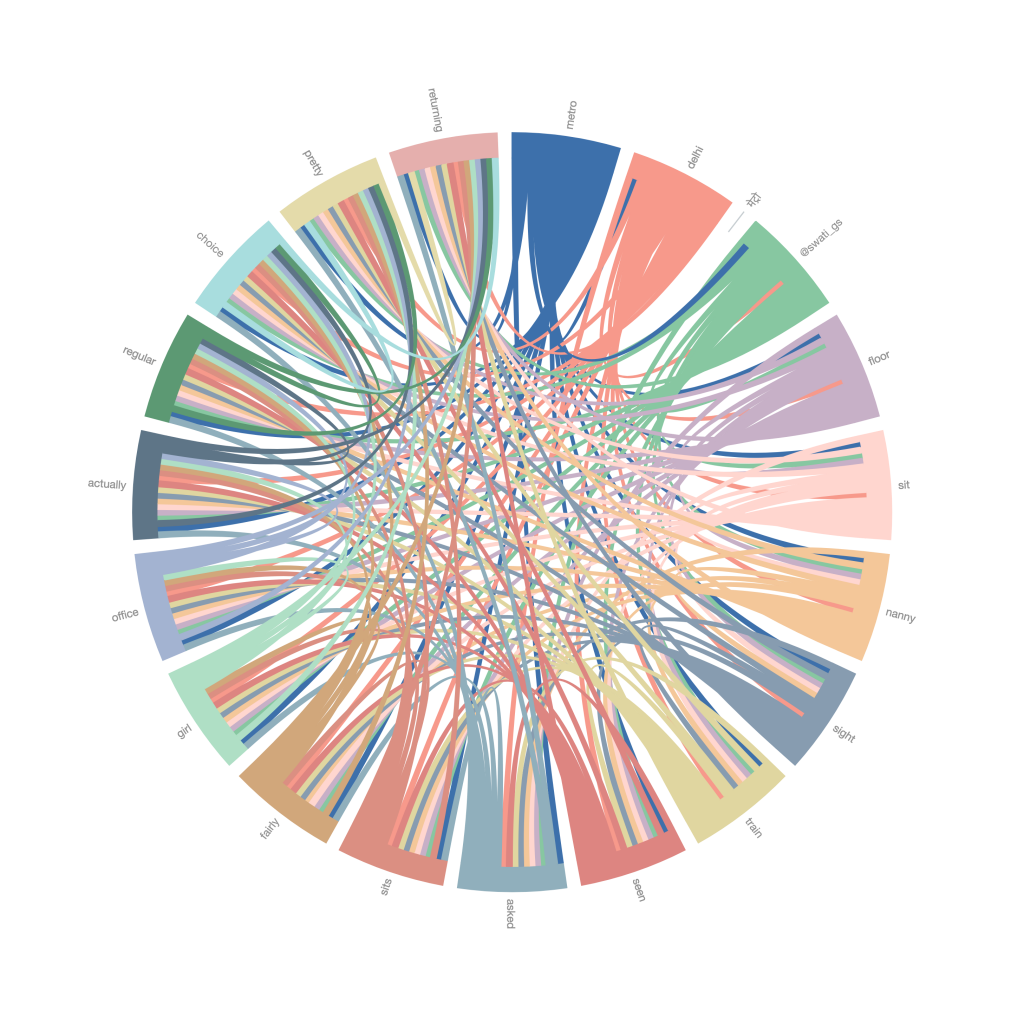 Although again, language barriers challenged our search a little, the search around the Delhi metro – still a relatively new system which only opened in 2009 – showed an interesting perspective on how people talk about Delhi, and wider Indian culture.

One of the stories that got most engagement over the week was about maids and nannies of middle-class families sitting on the floor of subway cars and the ensuing controversy about the role of class in India.