The meaning of TFW, a bittersweet acronym that’s here to stay

Online, the English language is mutating fast. As new words rise, fall, and acquire new meaning, some acronyms have turned into words of their own, and become staples of how people talk on social media.

LMAO, FTW, AMA, BAE: if you don’t understand what these acronyms mean, you are probably missing out on younger generations’ conversations on social media – and you know what they say about FOMO.

Today we will look at TFW, an acronym that stands for “That Feeling When.” The phrase is generally used as a caption to a photo, meme or clever joke about something out of the ordinary that has happened to you.

tfw it takes you 220 pics just to find 2 good ones #KISDFirstDay pic.twitter.com/0feIMKeXF6

We looked at how the TFW acronym has been used on Twitter over the years with our trendspotting tool: 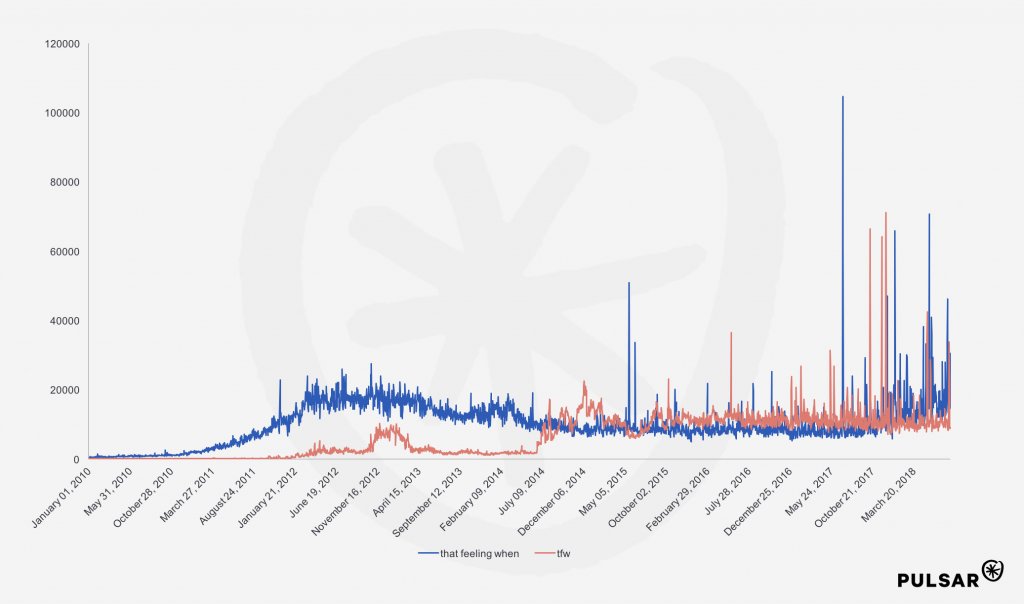 And we also checked search data on TFW over the years:

On Pulsar TRAC, we found that many of people using TFW today seem to be gamers, with bio keywords like ‘games’ and ‘video’ featuring heavily among this demographic. Another common bio keyword is ‘bot’.

This could be because TFW, or similar ‘when’ related phrases are a common one for the sorts of meme captions that are posted out by ‘parody’ accounts which do business off viral tweets.

Our sentiment analysis shows the TFW acronym seems to be used with a slightly more negative spin: either as a sarcastic way to report something bad that has happened, or a way of downplaying something positive. Although what TFW stands for is related to the context.

Two thirds of people using the expression do so while expressing negative emotions such as sadness, disgust, fear and anger – with sadness detected on 45.8% of posts. Another third expressed joy, showing that the meaning of TFW may also be nostalgic, with people using it to recount things that have happened to them in the past. 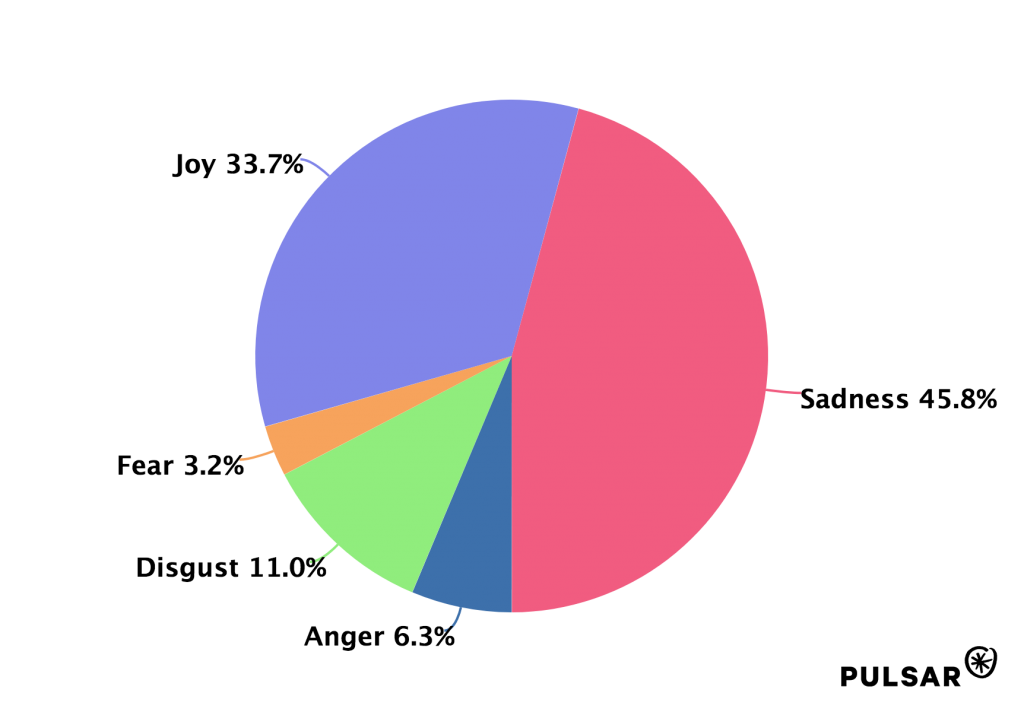 The phrase emerged as a common internet saying around 2011 as a style of ‘vaguebooking’ – posting statuses that imply your feelings without being explicit – and an ironic way of mocking that style of posting.

But the acronym TFW is also short for ‘that face when’ which fits alongside MFW/‘my face when’ which emerged on 4chan in 2009 – which also had its own spikes of specific minor tfw memes like ‘tfw no gf’ in 2011 and ‘TFW too intelligent’ in 2015 featuring the ‘character’ That Feel Guy.

From that point, usage increased both in the serious style, and its ironic counterpart, as it started to be used in memes. The acronym TFW got mixed in with a lot of other phrases ‘the olds’ didn’t understand, as we can see from web searches for the phrase increasing at that time too, arguably by people trying to find out what it means.

Here’s a neat visualization of how some words, including TFW, spread across the US over time. 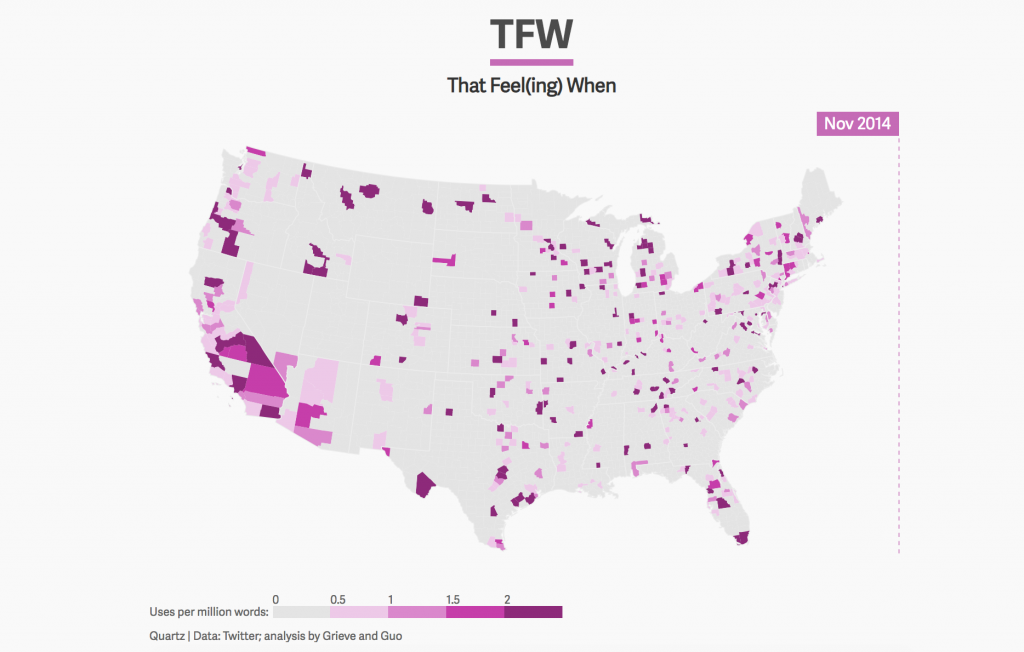 Embraced by the masses, the acronym of course was not lost on brands (who supposedly have no feelings so can’t experience the feeling when 🤔).

In 2017, Gucci used the hashtag #TFWGucci for an entire a social media campaign, featuring memes mixing high fashion images featuring their new watches with captions from “a new class of viral creators.”

#TFWGucci Derek Lucas, AKA @champagneemojis was inspired by the super-recent Arthur meme — the cartoon aardvark represents utter frustration with a clenched fist. New York-based photographer Benjamin Langford (@blangblang92) reinterpreted the meme through his own lens. Langford shoots flowers with a languorous, detached gaze, printing them larger-than-life. They represent the elusive illusion of authentic experience, a tantalizing beauty never quite reachable. For #TFWGucci, a #LeMarchédesMerveilles watch on his wrist and a bunch of flowers in his fist, Arthur is still frustrated. – Text by @kchayka. Discover more through link in bio.

While other brands use the TFW acronym more straightforwardly…

TFW you remember you have the other half of your footlong waiting for you.

Overall, TFW is here to stay: our analysis shows that the acronym has no intention of disappearing.