How Stuff Spreads: the #metoo movement

The story of how #MeToo spread
Written by Victoria Gray

366 days ago, a brave woman kicked off #metoo on Twitter.

It’s not who you think it is.   To this day, her tweet has 5 RTs and 5 likes.

Here’s the story of how #MeToo spread. 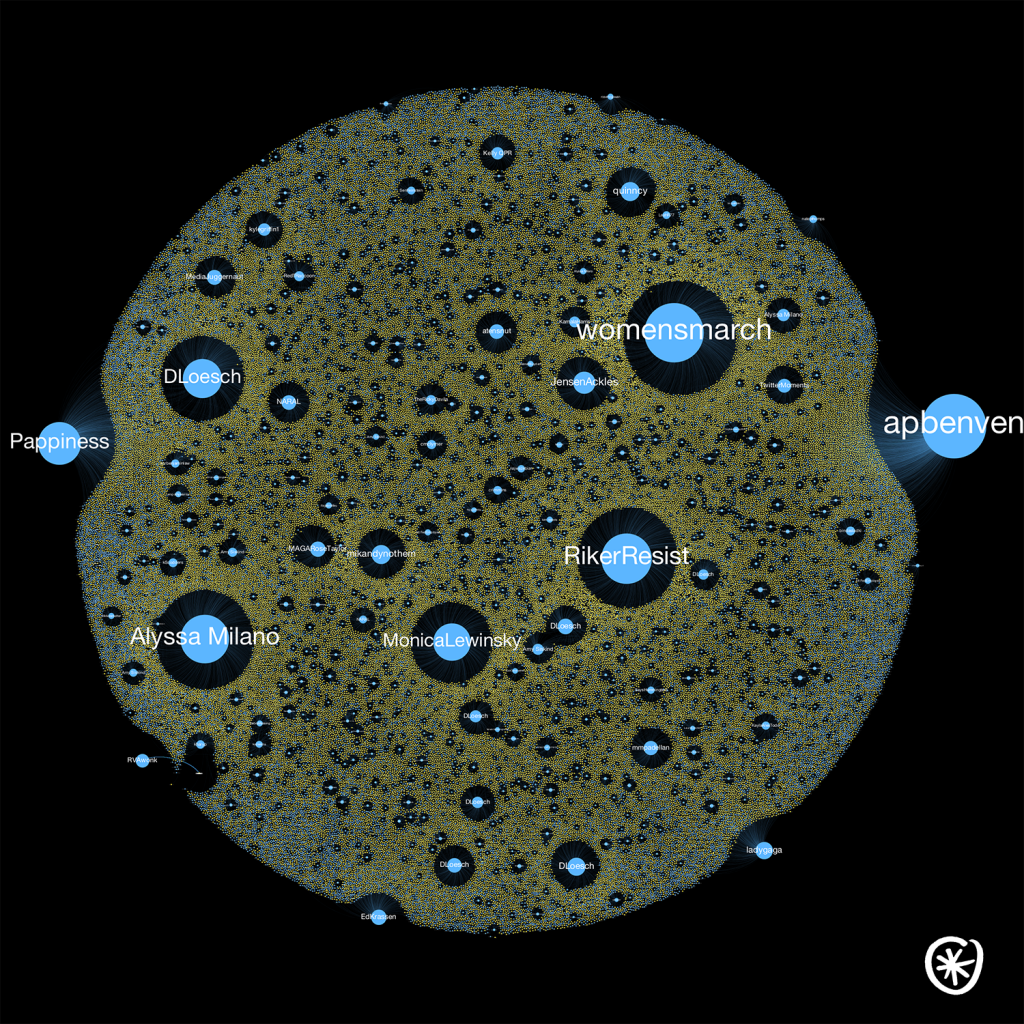 The New Mexico woman was not the first one to ever post this status.

But she was the first to transfer #metoo from the relatively private confines of Facebook to the public square of Twitter.

On Facebook 12M many statuses were reportedly shared over 24 hourson people’s private timelines, to their friends and family. There, it became something you couldn’t ignore as the evidence was right in front of people, not just happening to famous people.

But on Twitter, women were braver, speaking in a public space, and one where the backlash can be substantial. There, the cultural reboot could begin. 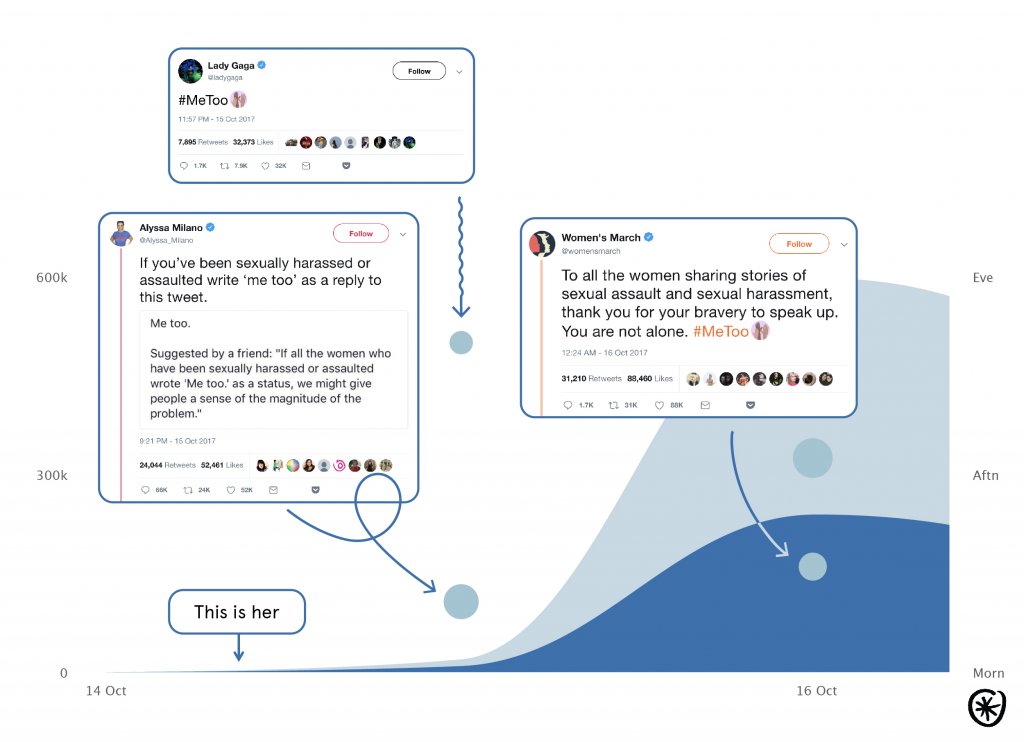 Alyssa Milano was of course the one to blow it up, and begin to show the “true magnitude of the problem.”

If you’ve been sexually harassed or assaulted write ‘me too’ as a reply to this tweet. pic.twitter.com/k2oeCiUf9n 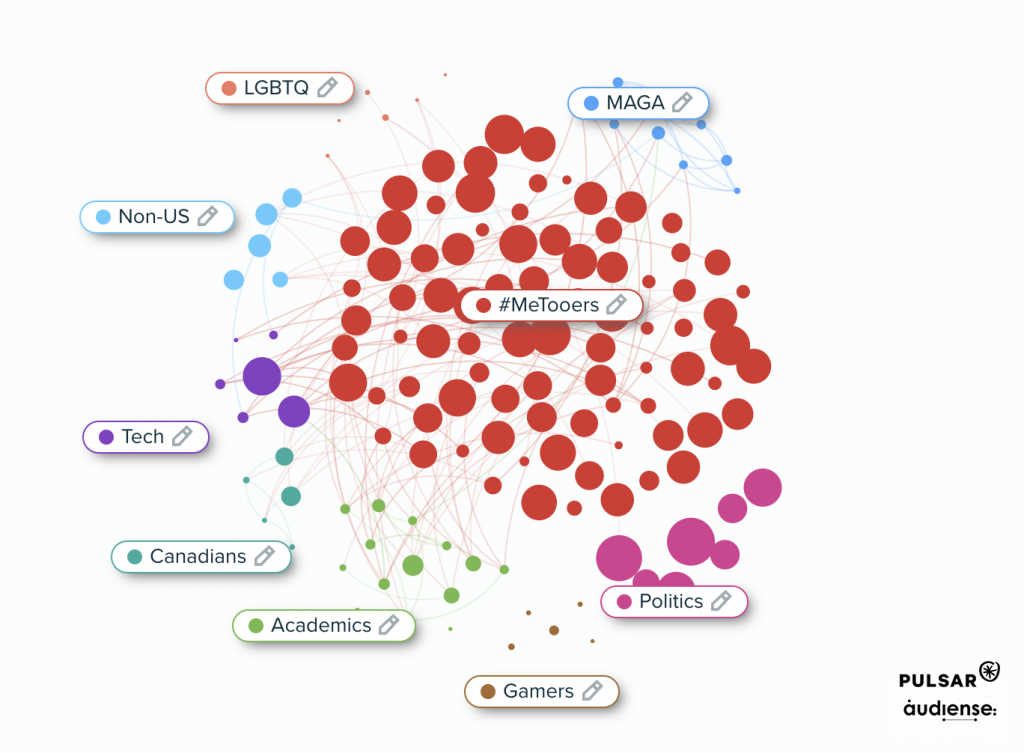 “It’s an extremely dense network” says Pulsar CEO Francesco D’Orazio (who made this viz with @PulsarPlatform + @Gephi).   ”Almost every single tweet here has a retweet, which is super unusual for any Twitter dataset I’ve seen.”

The most popular tweet of them all –with 54,090 RTs and 151,939 likes to this day– was by journalist Alexis Benvenite.   She acknowledged that we might be only seeing the tip of the iceberg.   ”Survivors don’t owe you their story.”

Reminder that if a woman didn't post #MeToo, it doesn't mean she wasn't sexually assaulted or harassed. Survivors don't owe you their story.

Over the course of this year, #MeToo spread throughout society and spawned other hashtags and movements, including #TimesUp and #WhyIDidntReport 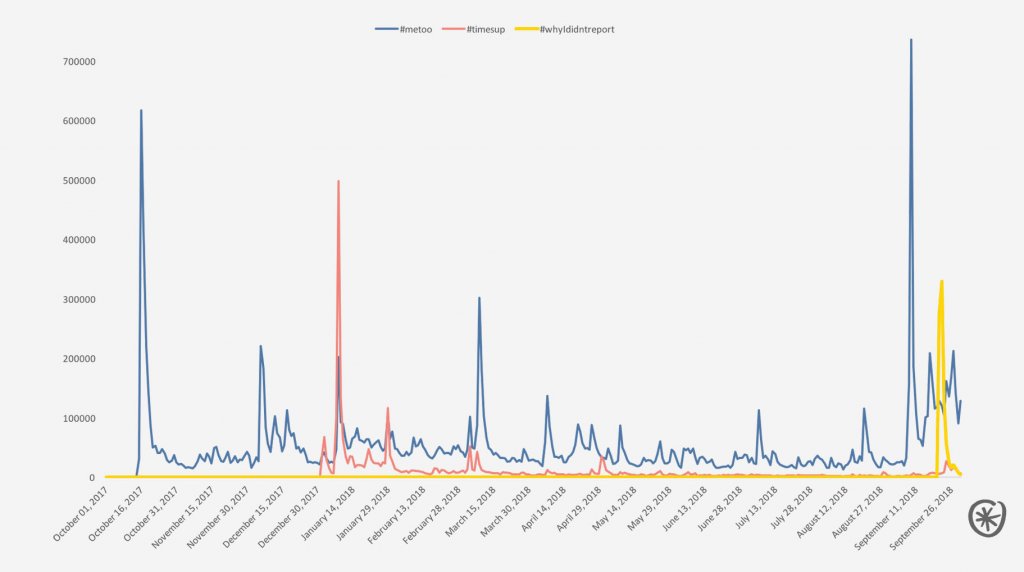 The peaks in the graph coincide with Harvey Weinstein resigning, #metoo activists being named person of the year, and the Golden Globes.

And over the past 45 days, #metoo has heated up again on Twitter, as the movement exerted pressure in ousting Les Moonves, CEO of CBS, and forcing a brief political standstill over the nomination of US Supreme Court Justice Kavanaugh.

More than a decade ago, civil rights activist Tarana Burke started the movement to help describe the pervasiveness of sexual assault in society:  ”I know exactly how you feel. That happened to me too,” she said.

How Videos Goes Viral: the role of audience networks