Marketers invented Blue Monday, and it worked. But what can they learn from its continued success?

That’s how in 2005 Dr. Cliff Arnall came up with a ‘formula’ for the combination of the bad weather, debt from being in the middle of two pay days, time since Christmas, failed new year’s resolutions, and general low motivation, ‘proving’ that the third Monday in January was the worst day of the year: Blue Monday. 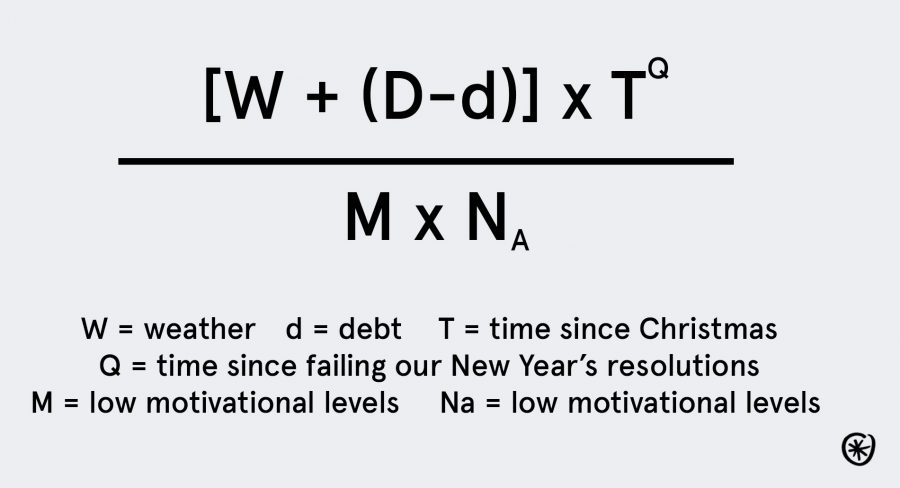 The confusing ‘formula’ for Blue Monday

The formula – which has been labeled “scientifically ridiculous”–  was created to promote a travel service, implying this would be the best day to book a holiday to cheer yourself up. The idea has since been taken on by countless marketers. But is this actually the most miserable day of the year? And thirteen years later, how should marketers handle this creation of theirs?

We used Pulsar TRAC to measure on Twitter terms around Dr Arnall’s Blue Monday ‘triggers’, to see if we could gain any insight to whether this formula holds true, and if the conception of the day itself, which is now saturated with marketing offers and light attempts to ‘cheer ourselves up’, has had any effect.

We found that Blue Monday clearly works for marketers. On the day itself in 2017, discussion of tedious topics and routine were the perfect opening for marketing activity. Our social research shows that they did indeed cheer people up. However, perhaps unsurprisingly, it is not a unique day for gloomy feelings, as the following week in 2017 showed perhaps more genuine occurrences of sadness.

On Pulsar TRAC, we searched UK Twitter accounts for keywords that might show somebody is posting about being down (taking into account of course that many people are not going to instantly take to social media about their mood) like ‘feeling sad’, ‘hate life’, as well as keywords around the triggers that were stated in the formula that concluded Blue Monday was the most miserable day of the year, and compared the mood on the third Monday in January with other days throughout that month in 2016 and 2017.

While this is by no means a comprehensive analysis of Blue Monday as a whole, we managed to get some insight into whether it is indeed the saddest day of the year on social media.

During January 2017, there was indeed a spike for the search terms on the third Monday in January – Blue Monday that year. Looking more closely at the content posted, a lot of this was discussing Blue Monday itself, and its triggers.

Interestingly, sentiment leaned more to joy than sadness, so it seemed that people were more excited at perhaps redeeming a marketing related offer. Either Blue Monday had achieved its goals and cheered everybody up, or they weren’t that sad in the first place because they knew it was coming and they could cash in on some deals.

Perhaps more poignantly, in January 2017 there were larger volumes for these keywords the following Monday, and the sentiment analysis detected up to 50% more sadness. A scan of keywords within these posts implied that there were perhaps more serious concerns at stake the week after, with fewer occurrences of the arguably lighter Blue Monday triggers, and a larger amount of tweets posted around sleep, change and hating our jobs.

Similarly, in 2016, although there was a spike of the ‘sad’ keywords on Blue Monday – that year January 18 – there were also high volumes of conversation around these keywords the week beforehand, with the second largest volumes on January 10, a Sunday, perhaps because of people dreading the Monday ahead. Blue Monday certainly provokes discussions of sadness, but it is not a silo, and these topics are important on other days too.

What does this mean for Blue Monday?

Blue Monday seems to have become a self-fulfilling prophecy, the fact it exists is causing people to talk about it. This year, the Blue Monday conversation had a lot of extra focus around mental health, perhaps the most obvious conversation that should be had on a supposedly sad day. While it has proved a repetitively successful formula for marketing offers year after year, some of Blue Monday 2018’s most successful content revolved around seeing the day as a milestone to get past, and being happier as a whole.

Cheering yourself up for a day is an easy marketing win, but perhaps in the social media realm, interacting with people and creating user-generated content about happiness is where marketers could succeed next with the Blue Monday idea. Self-care is a popular conversation topic on social media, and a sensitive approach to the bigger problems that are true whatever day of the week or month could provide the next winning formula.