#WhatIsLovein4Words? We investigate how a trending Twitter hashtag spreads

What is love in 4 words? Good question! We saw this hashtag trending in the UK on Friday morning and thought we’d track it with Pulsar to find out. Now that Valentine’s is over for another year, let’s do the analysis and find out.

Read on to find out everything you ever wanted to know about love (or a hashtag about it), including where love comes from, how long love lasts, what time is love, and if you can make it happen by sheer willpower alone…

What is #WhatIsLoveIn4Words? It’s a hashtag on Twitter where people shared what they thought love meant. (The answer often included One Direction.)

Why study it? We saw it trending on Twitter in the UK and thought it was a good topical Valentine’s story. Plus lots of brands were jumping on the hashtag and we wanted to know if any of them succeeded. How does Twitter react to hashtag hijacks, anyway? Are people cool with it, or is this idea that brands can insert themselves in on every public conversation getting a bit annoying, or naff (as these planners suggest)? We thought we’d find out.

Turns out love is not in fact 3am eternal [is it just us who’re KLF fans?]. Peak love was instead at 8pm GMT on 12 February, fully 28 hours after the hashtag was born:

Number of tweets and RTs by hour (GMT) – click to enlarge

The two peaks are at 7pm Wednesday and 8pm Thursday. The best time to reach your audience? It’s in the evening, when they’re watching telly, procrastinating on doing their homework, and otherwise kicking back and feeling chatty.

Love didn’t strike out of the blue. Instead it was deliberately sparked by an account called Hashtag Shenanigans, run by @BreezyPuffs, a comedian who works across Twitter, Vine and for AbsrdComedy.com. Each week the Hashtag Shenanigans account puts out a hashtag and asks its followers to riff on the idea. They’re practiced lulz technicians… 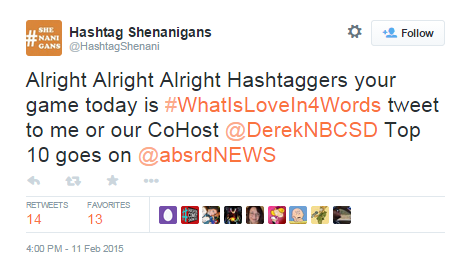 What’s interesting is that this viral hashtag didn’t start from a big super-influential account. @HashtagShenani has 2,500 followers and @BreezyPuffs 5,000.  Even if every follower had joined in, that’s not enough to go viral. In practice, this first message got just 14 retweets.

But what matters more than the number of followers they have is the “igniter power” of their social network. Hashtag Shenanigans provided the spark, but the hashtag took off because their audience caught the flame and fanned it. Igniter power includes a number of factors, including:

(For more on the role of audience receptivity in going viral, see Gilad Lotan’s talk ‘A Networked Take on Influence’.)

Evidently Hashtag Shenanigans was in quite a dense, well-connected and high-sharing corner of the Twitter community, because within an hour, much bigger accounts were weighing in. These are some of the key nodes who boosted the hashtag up to Twitter trending topic scale: 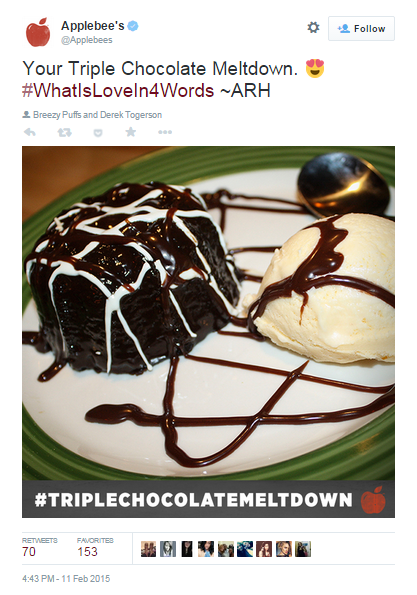 Less than an hour, and the content has reached 1,017,785 people according to our Actual Estimated Reach metric. Not bad… 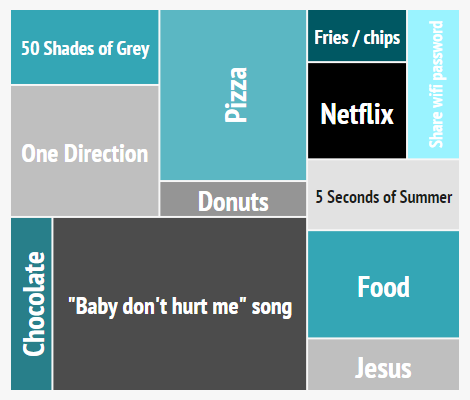 The top answer to #WhatIsLoveIn4Words was “baby don’t hurt me” – which is the next line from Haddaway’s song ‘What Is Love’. Web developer Christina (another not-especially-popular Twitter user) got a massive 1799 retweets for being one of several people to make this link.

Pop titans One Direction beat out Australian pop-punk band by a close 2,747 mentions vs. 2,623, and we also see a stack of films and TV shows in the top 10 most shared messages (see below). It’s all about fandom – the fan love was already there (and then some), the official accounts just tapped into it.

Second answer: Junk food. Pizza’s the top-ranked food item, followed by donuts and chocolate. Ordering pizza with your sweetie, or having pizza instead of having a sweetie – either will do! 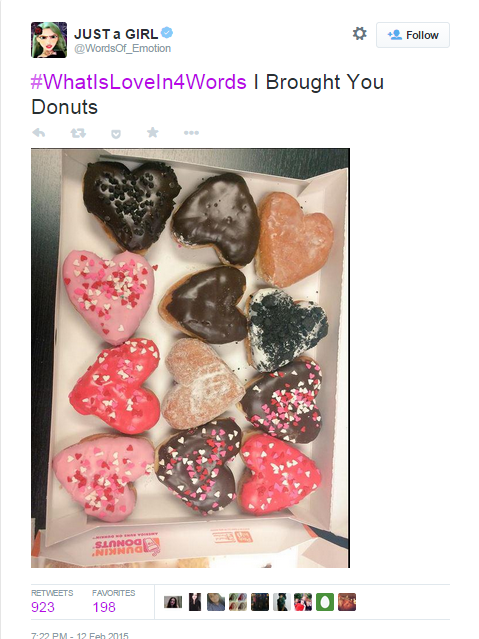 Fandom and sharing and animal kindness, oh my! Twitter was on very positive form for Valentine’s Day, which was kinda nice to see.

In short, yes. Or at least they’re prepared to engage and share them. Brands and commercial accounts (mostly films) made up 5 of the top 10 most retweeted answers to this hashtag.

The reason there wasn’t a backlash to brands’ involvements in this hashtag? We reckon it’s threefold:

This (and perhaps a bit of paid media spend) is how brands managed to generate many of the most-shared tweets in the conversation.

7. Love is all around us

We used Pulsar’s Clusters to chart discussion by country. In the lead is the US, with 71,477 posts coming from verifiably American accounts or GPS locations. But the real story is how global this hashtag was – from the Philippines (3,098 tweets) to China (2,476) and Ecuador (2,136), it turns out that the question ‘What is love?’ is something we’re all wondering!

Also worth noting that the hashtag spread to these markets sometimes based on the actions of a single individual – e.g. for Ecuador it was YouTube star German Garmendia, with 5.4m Twitter followers.

8. How does love differ across cultures?

This visualisation shows the top Topics in discussion across the US and UK. On Pulsar, topics come from semantic analysis that looks for the ‘subject’ of the sentence – it’s a way of filtering through all the noise and focusing in on what matters.

In the case of love, the UK and US are much the same: “Baby don’t hurt me” and pizza-related answers were top in each market.

So that, then, was love on Twitter this Valentine’s day – obsessed with junk food, 50 Shades of Grey and One Direction. Then again, it is supposed to be a day for indulgence!

In my next posts I’ll look at the networks of retweeting more closely – and the “automated love” of how spammers latch on to trending hashtags. Stand by!