Does Social Media Change Everything About Public Affairs?

Does social media change everything about public affairs? This was the question posed to the panel at Keene Communications’ debate last week, an event hosted as part of Social Media Week in London. In this interactive discussion, key speakers from diverse backgrounds in government, public policy and advocacy discussed the impact of social media in today’s rapidly evolving landscape of public affairs.

Keene Communications is a London based agency offering practical communications advice in PR, Public Affairs and Representation consultancy. As a Pulsar client, Keene Communications uses our platform to derive deeper insights for their clients in the political and policy-based sectors by utilizing platform features such as audience analysis, campaign tracking and influencer identification. They even gave us a shout out on their debate backdrop! (see top left) 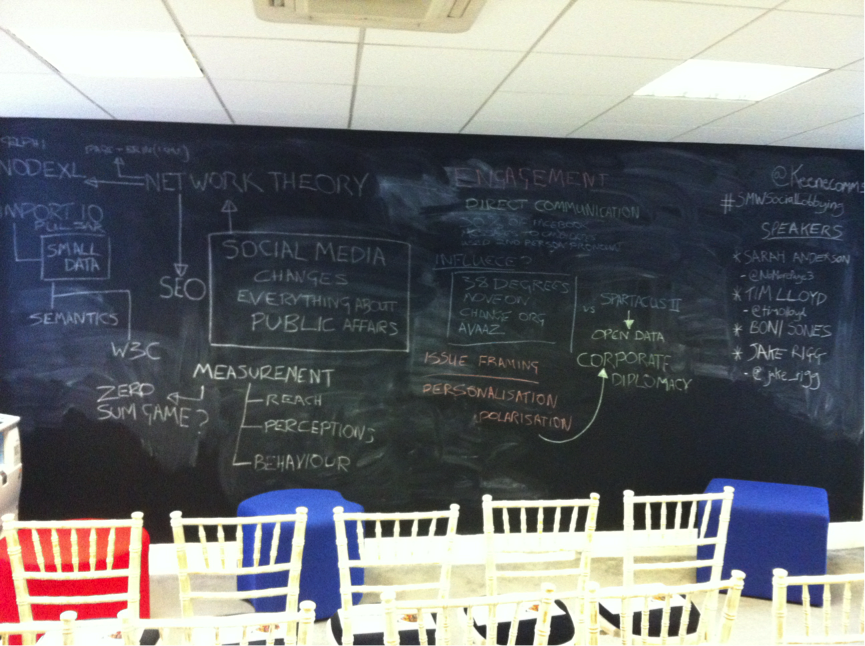 The panel was kicked off by Keene Communications Managing Director and former Head of Policy at STEP (The Society of Trust and Estate Practitioners), Jake Rigg taking the floor for introductions and then asking the panel “Does social media change everything about public affairs and if so, how?”

The first speaker to weigh in on the topic was Sarah Anderson of feminist activism group No More Page Three, who spoke passionately about the power of social media to unite individuals who otherwise might not have the physical or emotional ability to connect on an issue (a phenomenon she calls “pyjama-activism”). Sarah’s main argument was simple: without social media, the vast majority of her group’s members and supporters would not be able to meet and galvanize on an issue.

This point was supported by the second speaker of the night, Tim Lloyd, from digital engagement agency Helpful Technology. Tim’s experience in the public sector at both the Department for Business, Innovation and Skills as well as the Department of Health allowed him to speak on the matter from the perspective of policy officials and their constituents. Tim agreed with Sarah that social media is an important tool in effective communication, citing Twitter as a primary tool for policy leaders to engage directly with supporters and gain a better understanding of their constituents on both micro and macro levels.

The last speaker of the night was Boni Sones, OBE and former BBC News 24 correspondent. Having worked in Parliament on both sides of the isle as founder and head correspondent for Women’s Parliamentary Radio, Boni approached the issue of social media’s effectiveness on changing public affairs from a conservative standpoint, focusing on the value of content over its rapid dissemination. “Social media is an effective vehicle for getting a message out, but you still need a message.” Fair point: the traditional PR skill of crafting a narrative is no less important in this new channel.

The panel concluded with some interesting and thought provoking questions being raised from the audience, such as how different political structures affect the value of social media as a “feedback mechanism” between civilians and policy makers, or how specific channels are more effective than others at building communities around a common cause or issue.

The consensus among the speakers was that social media is undoubtedly changing modern public affairs, although it remains up for debate to what degree this is true.

Here are some key points we took away from the discussion:

1. Social media is finally allowing the connection of social networks globally, beyond single communities. It has the power to galvanize and bring groups of people together on an issue with an immediacy that would be almost impossible otherwise.

2. Government officials are accessible and visible to their constituents in a way that they never were before.

3. Public officials are much more aware of their constituents’ common needs, beliefs, and desires through both systematic social media monitoring and their own personal participation on Twitter.

4. Many arguments against the power of social media as an effective tool in public affairs assume other reliable forms of news (via television, internet or paper) are available and that citizens are engaged in a government in which the freedom of speech is protected and exercised .Yet this is not always the case.

5. Without valuable content, what is the value of social media?

6. Social Media forces us to “Dig down.” This means finding out who is truly sending the message and for what motives (Who is behind a message, what are their objectives, who do they support, or what kind of reaction might they be hoping to receive?)

7. Many current public campaigns wouldn’t exist at all without the power of social media!

Read back on the Twitter conversation by using #SMWSocialLobbying .

Here at Pulsar we’ve won some great government and charity customers who find the platform extremely valuable not only for understanding online conversation about their own organisations but also the wider public interest. Last year we helped Action On Hearing Loss develop a comms strategy to reach out to a wider audience who may not have identified as being hearing-impaired. We have also tracked the horse meat scandal of 2013 to understand public reaction to this public health crisis – both in terms of short-term crisis management, and longer term consumer trust and concern for supermarket regulation.

This shows how social media monitoring for public affairs doesn’t have to be just monitoring your organisation’s name and reputation – important though that is! Instead, the real value of social media in public affairs may lie in how it lets you keep your finger on the pulse of public opinion at every scale – from creating a  broad, landscape view of your audience to “digging down” and investigating the nuances of each specific message.

If you’d like to talk about how Pulsar can help with public affairs monitoring or see our horse meat search for yourself, contact me at [email protected] and I can show you round the platform and introduce you to our research consultancy offering.